The Hokies now host highly middleocore looking at11 up and 12 down overall Boston College. The Flying Eagles are (.467) or 5-7 in Atlantic Coaching Conference play. Or so-so for 2019-2020 tied for 8th place in the A.c.c. Also tied for 8th place in the A.c.c. you ask? Well, how ’bout the team that has tallied precisely one win since mid-January? The caveat being, even as a (VT+7) seven-point home-standing favorite out on the Vegas big board, it is actually Boston College who has come correct, shook themselves and rallied to begin to press for post-season contention. Having gone a useful looking .5oo since the upset us— whereas we have gone a useless looking o for four over the same times pan. Nevertheless, you wanna know who is gonna win and by how much, right? So read on, to find… out!

On April 25, 2018, Christian signed a two-year contract extension to remain at Boston College through the 2021-22 season.

Jr. season Steffon Mitchell, at 6′8″, 220 lbs. is the real Minnesota native workhorse here as one or two other guys play token or match-up minutes whereas Steffon nearly goes for starting stat sheet time in relief. As Steffon (great name) was basically a Florida High School human double-double machine who could and still can, defend. Right now, Stef’ is at: 6.7 ppg, on a team-leading 8.5 rpg with 2.8 apg, 2.4 spg, and 1 swats; and that is doing a lotta little to medium things big on right. And if Mitch’s offensive game ever evolves (42.2% from the floor with 22.9% from 3-point-land and 51.9% FT’s), he’s prolly an overseas pro’ just for his defensive acumen. As he’s a stretched version of our very own Hill sans the reticent offensive output as-is. (UPDATE: this is one of the ones said to be bitten by the flu’ bug; Godspeed!) (UPDATE: modest retreat on most offensive markers are the story; here, ⇓)

6′7″, 230 lb. CJ Felder is a Baltic Ave. man’s kinda lean(er) looking Ben Wallace and his rack-attacking game tends to reflect this as well. Ben, I mean CeeJay, nets you 6 hard-fought, hard-won ppg and 4.2 rpg in frontcourt subbing. Felder missed a lotta high school time (injuries/God Bless) and this may have capped his P/F ranking at 45th best in the USofA overall. The book here says that Felder is a surprisingly good face-up Offender who athletically runs the floor well in spite of his at least partial defensive reputation. As the shooting will likely rise (40.3% from the floor) as worker-bees typically drone on and on and on at practice just like dat long-term. (UPDATE: mixed with movements elevating both up and down, ⇔) 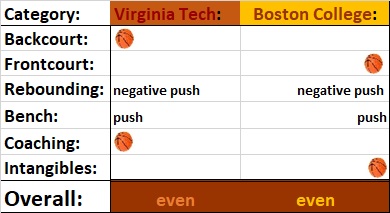 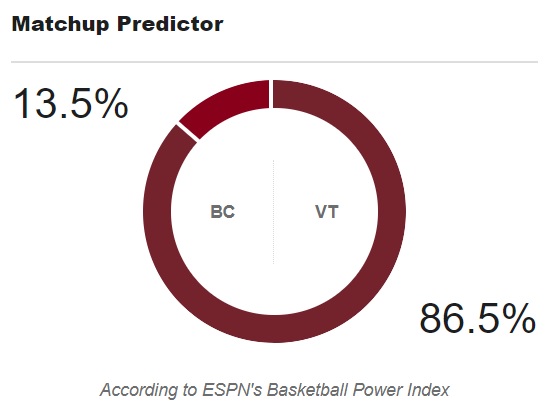 The takeaway here is… well, according to my 36 hours of calc’ and stats over in McBryde Hall, ESPN now has us pegged as being ~14% mo’ likely to beat BeeCee @home inside our very own Cassell Coliseum than we were up @BeeCee before.

The only caveat being… we sprained both ankles looking for what climbers colloquially call a: “line of weakness” during our last got eaten by Yeti ascent up Chestnut Hill.

^that^ and for the first time in our now way too rapidly expanding -though not preseason unexpected- 9 L’s on the season…  well, honestly, I thought we looked weak last time out.

Even weaker than when we got too much Maui in our Wowie and basically forgot to show up for Dayton and/or B.y.u. or each.

As our recent visit to the ATL looked like total weak-sauce upon breaking tape.

And as we know it is NOT injuries or illness, it makes and therefore leaves me wondering out loud if it is (now) indeed something more than:

Because, methinks although any and all of ^that^ is prolly right to some degree or another, I am left wondering if this is something ‘other’ in addition to all of ^that^.

As this is indeed what playing .167 basketball since the middle of last month tastes like.

Our handy-dandy friend the so-called Forum Guide of Graham Houston fame is calling for a now somewhat cut down to size -although still utopian looking- 32-point Fighting Gobbler VicTory on Saturday. However, when taken in only inclusive to 25 January 2020 A.D. terms? It is calling for a triskaidekaphobic game or a 13-point VomiT for ~3 PM Saturday!

The annualized year-to-date vitals say that… V.Tech is up almost 4% in shooting percentage margin (¾ of which was courtesy of  O); V.Tech is up 7% in 3-point percentage margin (almost all on O); and highly unusually enough, V.Tech is up +5 in rebounding margin; (only because BeeCee is even more negative in rebounding margin than V.P.I. is for the duration). (UPDATE white-board: these shooting metrics were cut nearly in ½ for the season in just 12 days time!!! Wowza!)

The most recent 5-game metrics say that… the Eagles are now up a staggering near +9% in shooting percentage margin (per the Hokies slumping on both ends; although worse on D); the Flying Eagles are now up a numbing +12% in 3-point percentage margin (with close to 10% of that being from superior 3-point BeeCee D); and neither team up a |absolute-value| tied –5 caroms apiece in Windex work. (UPDATE pasty-board: double Wowza! As my-oh-my how the statistical tables have turned in the last fortnight of play!)

So, right now and after updating -and then re-crunching- the last 5-games numbers; twice… I would not care to say these are my pet and proverbial: “two ships passing in the night.”

As one ship (the O&M one) is passing a lotta H20 right about now.

Further, although not sure I’d say the U.s.s. Young is aging out and 2020 sinking as I type— nevertheless, it is surely beginning to list: “to port”.

As there is no longer any denying that something is up down in the chilly mid-Winter New River Valley.

Ergo, therefore, to Whitt… I really was gonna pick us to get well soon @Home. A little home-cooking, a little homesteading, 702-miles worth of Boston College sledding and some bad O&M juju shedding.

Well, what part of ‘right’ did you see down @Gah.Tech last time out?

Yah; me three on me neither as my trust quotient is way way down right about now.

p.s. for clarity… Eye am NOT typing that methinks BeeCee is better, consider the mathematics of my confidence interval for this upsetting pick. I am however typing that I know
I can not trust VeeTee right now.

And to borrow a sources’ word: something has:
“disconnected” here.