Virginia Tech men’s basketball is coming off of a helluva an XL-sized triumph over North Carolina at home on Wednesday night. And try as you might you still cannot spell VicTory sans the Vee and the Tee!

The Hokiebird now must flap its wings 7o4 miles nor-by-nor-east and sojourn for the All Audubon Championship in hoops. Where we will face the altogether middleocore looking 9 up and 10 down Boston College Eagles. Who are three dash five (.375) in A.c.c. play thus far this year. Who are also in serial need of a post-season résumé dotting win right about now. And we do have a medical update here… Nonetheless, you wanna know who is gonna win this one and by how much; right? So, read on… to find, out!

On April 25, 2018, Christian signed a two-year contract extension to remain at Boston College through the 2021-22 season.

Jr. season Steffon Mitchell, at 6′8″, 220 lbs. is the real Minnesota native workhorse here as one or two other guys play token or match-up minutes whereas Steffon nearly goes for starting stat sheet time in relief. As Steffon (great name) was basically a Florida High School human double-double machine who could and still can, defend. Right now Stef’ is at: 7.2 ppg, on a team-leading 8.2 rpg with 2.8 apg, 2.4 spg, and 1.3 swats; and that is doing a lotta little to medium things big on right. And if Mitch’s offensive game ever evolves (43% from the floor and 53% FT’s), he’s prolly an overseas pro’ just for his defensive acumen. As he’s a stretched version of our very own Hill sans the reticent offensive output as-is. (UPDATE: this is one of the ones said to be bitten by the flu’ bug; Godspeed!)

6′7″, 230 lb. CJ Felder is a Baltic Ave. man’s kinda lean(er) looking Ben Wallace and his rack-attacking game tends to reflect this as well. Ben, I mean CeeJay, nets you 6.4 hard-fought, hard-won ppg and 4.3 rpg in frontcourt subbing. Felder missed a lotta high school time (injuries/God Bless) and this may have capped his P/F ranking at 45th best in the USofA overall. The book here says that Felder is a surprisingly good face-up Offender who athletically runs the floor well in spite of his at least partial defensive reputation. As the shooting will likely rise (38.7% from the floor) as worker-bees typically drone on and on and on at practice just like dat long-term. 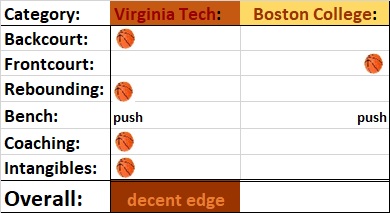 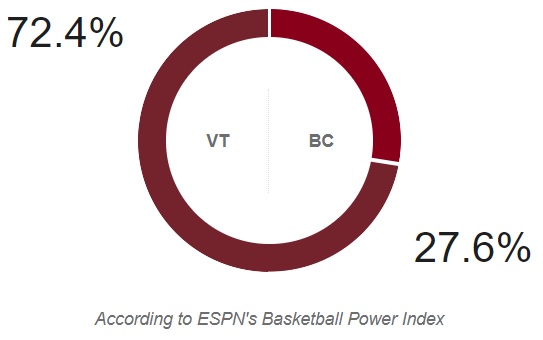 The takeaway here is… Boston College has only enjoyed 1-win since about a week prior to Gregorian Christmas (12.25).

The caveat is… they have mutually not enjoyed a metric ton of health or of positive breaks. Because if not for bad-luck this 2019-2020 Eagle squad would have no luck at all.

The harsh part is… they have only been competitive in one of their last six L’s since Christmas even if they did upset no.18 and defending National Champion hooVa in the meantime.

The odd part is… even when they had their roster at or near full-available strength? They still (somehow) managed to swing wildly up-n-down earlier this campaign. What with impressive 3 and 5-game win streaks that included taking the scalps of: Wake, Notre Dame, and CAL. Then they turned right around and got done-out by the likes of: Belmont, DePaul and neighborly Richmond.

i.e. go fig’ on which BeeCee hoops team is which— even when basically healthy.

Our handy-dandy friend the so-called Forum Guide of Graham Houston fame… is calling for a virtually umpossible 40-point Hokie total blow-out VicTory on Saturday. And even when I took this on a pro-rata basis (and generously applied a N.Dame weighting) it still called for a 9-point Tech Triumph on the road. Forty seems in excess of our best-case or a “reach” to me, tho; high single digits is hopefully not beyond our “grasp.” (Classic AM.Lit thanks to coach Ro.Browning, insert (_____) here, check!)

The most recent 5-game metrics say that… the Hokies are up a sharp-looking +10% in shooting percentage margin (7/1oths on D actually); the Fighting Gobblers are up a staggering +22% in 3-point percentage margin (a bit more on O&M D, tho’ BeeCee is downright chilly here on O); and Vah.Tech is up a |absoutle-value| +3 caroms in Windex work (same drill as above, both are negative, it is just that V.Tech is less negative on the glass in the last fortnight of play).

VeeTee is up +3% at the charity stripe for the year.
With V.Tee +2 on R&R in the last couple of weeks here.

So, and for the fourth time, all season long -by my tally- we/Vah.Tech is catching yet another All Coaching Conference club at a pretty good time.

In very particular if the dings and dents listed above do not give Saturday afternoon a go. As what was maybe, kinda, sorta… a fringe looking bottom-shelf Atlantic Division C.I.T. or C.B.I. caliber roundball club has gone and gotten their powder wet regarding what little too decent firepower coach J.P. Christian did have bunkered at his 2019-2020 disposal up on Chestnut Hill.

As honestly enough… that full-power version of Boston College could and possibly would have messed around with us at home.

And beyond we/V.P.I. get just too dang high on our triumphant U.n.c. fumes?

You really do have to like the more talented squad here.

And if you do not like that?
You really do have to side with the healthier squad here if nothing else.

Because unlike the rest of the typically skyscraping A.c.c.?

BeeCee is not quite a Steve McQueen, Robert Wagner, William Holden, and Fred Astaire Towering Inferno of an overmatched post-match-up down low.

Or at least they were not; well, not until they got Nik’ got back and if B.College can slow this one down and grind this one out? Stranger Things have happened out on the .3oo
visiting win percentage A.c.c. road historically.