Today’s word of the day is… Aquila

Boston College Head Coach: Jeff Hafley: age=43, (12-12 overall and @B.C.); has a rep’ for Defense itself and the Secondary in particular. Also said to be an Ace at game prep, and an Energizer bunny type of coach.

Baller Hafley was a four-year letterman (1997–2ooo) as a Wr1 on the Siena Saints football team and graduated in 2001 from Siena College with a bachelor’s degree in history. He earned a master’s degree from the University at Albany, SUNY in 2oo3.

Before entering the N.f.l. ranks, Hafley spent 11 years on the collegiate sidelines with coaching stints at Worcester Polytechnic (2001), Albany (2002–05), Pittsburgh (2006–10), and Rutgers (2011). While at Rutgers, the Scarlet Knights were the ninth-ranked passing defense in the country and Duron Harmon earned first-team All-Big East honors and Logan Ryan received second-team accolades. Both Harmon and Ryan were drafted by and played for the New England Patriots. Additionally, you can see where recruiter Hafley has some inherent in situ P.R. type juice already Nor.-by-Nor-East hooked up and good to go.

In 2012, Hafley made his N.f.l. coaching debut with the Tampa Bay Buccaneers. He joined the Bucs as assistant defensive backs coach and spent 2013 as the secondary coach/Fs/Ss. In 2013, Hafley oversaw a unit that helped Tampa Bay finish tied for third in the N.f.l. with 21 interceptions. On January 27, 2014, Hafley was hired by the Cleveland Browns to coach the secondary. Hafley would remain in this role for 2 seasons (2014–15), before being relieved of his duties due to a coaching overhaul. On January 24, 2016, Hafley was hired by the San Francisco 49ers’ new head coach Chip Kelly to coach the defensive backs. In 2019, he was hired to be the co-defensive coordinator at Ohio State. Hafley quickly established himself as one of the best recruiters in the country, truly. He has a rep’ of: “a monster” defensive coach in the coaching sewing circles. And, he can also ink studs to LOI (letters of intent); what with being ranked ninth overall recruiter for the 2020 national recruiting class by 247Sports.com. On December 13, 2019, he was hired to be the head coach at Boston College after the firing of Steve Addazio.

Finally, from what Eye can gather/glean? This is one well-loved coach… in; house. Staffers, B.C.edu, administrators, and media alike all sing coach Haf’s praise. And where there is that much smoke there is bound to be some smores, fire. (Not since ½ past Frank have Eye heard of it on this level, either. So you’d have to think he is doing something(s), right… Godspeed to any leftover/refugee good guy still fighting the good ’22, fight!)

Defensive letter-grade:
This is an average D overall. Same as last year early on this year… better vs. the pass and nearly inviting vs. the run. C to maybe the lowest possible C+.

p.s., O.d.u. was 30th in Returning Production last week… and we all saw what the Learning and Experience curve happened when the O&M chips got big-n-blue. i.e., VeeTee is 77th in returning experience; with new everything everywhere you look.

Well, the Qb1-2-Wr1 is an A+++, Rb1 is not less than decent… and even with an initial F.U.B.A.R. online efforting? That’s enuff for a dangerous C+++. More, if they stop turnstyle’n and profiling upfront.

The Eagles are 44th in Net Punting. BeeCee has had to replace the four-year starter, Grant Carlson. Danny Longman and Australian true freshman Sam Candotti are competing for that role. So, either way, the Experience Curve is bending back against itself to the suspect for the Eagles here. (Might be a good team to take an early-season to bring 10-men jab at for it…).

Danny appears to have won the P1 roll. Danny is a utility legger. 5 for 5 all-time for BeeCee on F.G.A.’s. He has been their KO guy for a couple of seasons (with a history of missing out-of-bounds). He has 8 solo tackles and two assisted halts on KO coverage. That does not read like a softie to me. His massive TicTok following is another matter entirely. Don’t seem to take himself tooooooo seriously, so there is that. He is also in grad’-school (Finance major), so Bee.Cee.edu propers for dat. He also kicked the game-winning field goal in the state championship game with eight seconds remaining in the game which got him named a Max Preps All-American (Miami, FLA state-bling). Danny competed scholastically in track and holds school records in 300m and 800m; he also started in soccer. I’d say that makes him an all-’round athlete which you do not oft’ sight from K’s/P’s. Although Danny hit up some very big high school footsie numbers. He may or may not have ever eclipsed that in collegiate terms. Seems a serviceable and highly experienced leg-gamer to be a single-shot 1-n-done Punter no.1. You could do worse… and he and his beard have a lotta TikTok game. Did I mention their game, yet?

Last year’s K1 (Danny Longman; who ain’t ½-bad) has been given the boot by this year’s K1: (Connor Lytton). Conner went to Frank Beamer H.S., or by way of localized Radford Bobcat fame. Where he was merely nationally ranked as the No. 5 scholastic kicker in the country by 247 Sports and No. 26 by ESPN! Not too bad, and neither is being named a 3-straight-seasons: Team Captain at R.H.S. Not sure I’ve ever read that one before. So, Mister Connor musta been doing something New River Vale right. Anywho… 5′12″, 2oo lb., rookie or nugget voting year c.Lytton seriously has Howdy Dooty gonna get carded deep into his late 30’s looks. All this cowboy needs is a rope and Hyde and Zeke: the twin bears and he 31st.Oct. Costuming Contest wins. Easily at that. As kicking goes… Connor has range out into the late-40’s. Tho’ not quite as rangy beyond that. 48-yards max’ in H.S. and 49-yards max’ for the chowders says so. Last year he was stellar enough, albeit on limited data points; check it… 85.7% on FGAs @6-7 and 100% on P.A.T.’s @15-15. The glitch is… only one F.G.A. ≥34-yards thus far! So, maybe he is all dat and a snap? Or, maybe not? Hard to tell on such collegiate leg-swing traction/truncation… still yet, Eye can tell you he has tallied zero passing or rushing attempts at any level. So, trickeration should be off the table here. (Ditto, no blocked kicks at any level, which is impressive). c.Lytton is 3 of 3 on P.A.T.’s and o fer 1 on F.G.A.’s for BeeCee thus ’22 far. Time=tell on this one…

Special Teams letter-grade:
Other than KO returns? They may be okay here… at least they do have some leg-game experience. Just hard to tell when older guys never did much when they were, younger. B— for now.

Number of Eagles who could nest @Tech=9 or 1o.

The BeeCee Flying Eagles have not landed an eight-plus-win season since 2oo9. And, while Hafley’s recruiting success —which has included tasty looking back-to-back top-4o classes— has been a shot in the (potential or on paper) arm, the honeymoon phase of his hire is over. The pressure’s on in Year 3. 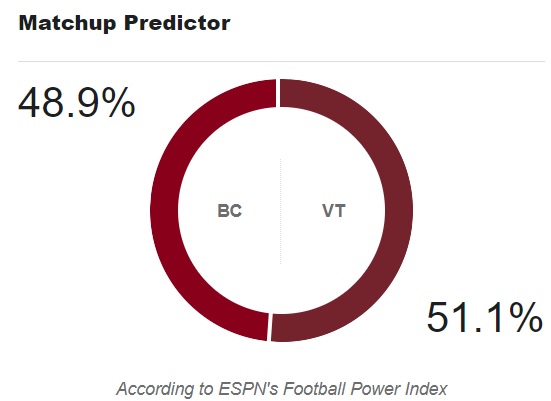 Or to put it a mo’ colorful way?

These Eagles remain marooned in the land of the, okay.

Because… from 2o13 to 2o18 the F’n Eagles won seven games five times in the six years.

They were steady, they were consistent, and they yet couldn’t seem to break through and do a whole lot more. Some might say they were capped and some others might say trapped.

Dr. Broderick of Astro-Physics @VeeTee would call this the 4th Law of Newtonian Mechanics.
i.e., ‘stuck’.

xxx‘s & ooo’s:
…I guess it has to favor the more uniform or more familiar Staff that has been together longer.

At least they know each other; even if they do not always know what to, do.

Or, maybe people who do not, watch… as this one may not be what the T.V. suits, want. 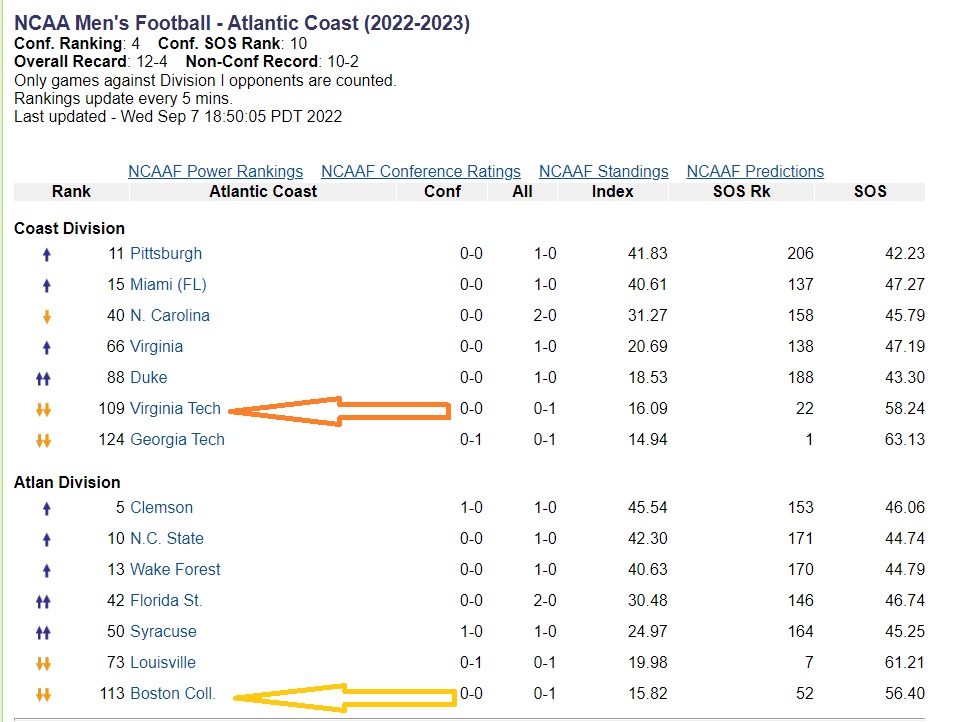 #ChallangeA.c.c.epted… there are 1,440 minutes in a day and VeeTee will have to win prolly mid-50’s to have a shot -much less feel safe- about this one here.

the optics… Did Eye mention this one may not be easy on the eye(s), yet?

the skinny… Just that, BeeCee is not exactly corn beef stocked and well-fed this year. Could there be a so-so BIG-man beats a so-so little-man edge to be found?

Analysis: Well, the D’s clearly has the advantage here. Tho’ as splitting hairs goes… BeeCee might just nick this one due to their better pitch-n-catch battery on the third try. EDGE=Bee.Cee (small).

Analysis: Well, the D’s seem sharper here, although the dullest part is clearly Bee.Cee’s unserrated oLine. EDGE=Vee.Tee (we hope a lot, too)!

3-game splits, H/A, nothing yet… give it a week or three.

Will try to get to more for all of you before October ends— Coach God Willing… appologies.

Here in the sportlight we are picking up the court-jesters’ pieces of the dropped kaleidoscope erstwhile known as @O.d.u., again.

Or, we bend forward at the waist, open wide and say: “AHHHHHHHH”… 12 midnite Saturday and you will full (Corn)-“Mooooooon-Riverrrrr”, know.

We rise up and come correct and outright improve and you might know even mo’.
(As this is the harder Recency Effect Applied Sports Psych vector to reckon).

So, my picking rules were pretty well set here…

Now, that candor firmly in no-selfies ever taken place?

We HAD BETTER beat Bee.Cee!

As their oLine match-up is entirely mo’ alluring than the one for the upcoming B., D., T.

As in it is only 60-minutes past ‘start’ and Prybar and Co. are nearly already outta ’22 time.

Here’s hoping weather.God helps us out a scosche or more and negates how these Aquila’s, soar.