Today’s word of the day is… a·vail·a·ble

late Middle English (in the senses ‘effectual, serviceable’ and ‘legally valid’): from avail + -able. The sense ‘at someone’s disposal’ dates from the early 19th century.

Boston College Head Coach: Jeff Hafley: age=42, (1o-8 overall and @B.C.); has a rep’ for Defense itself and the Secondary in particular. Also said to be an Ace at game-prep’, and an Energizer bunny type of coach.

Baller Hafley was a four-year letterman (1997–2ooo) as a Wr on the Siena Saints football team and graduated in 2001 from Siena College with a bachelor’s degree in history. He earned a master’s degree from the University at Albany, SUNY in 2oo3.

Before entering the N.f.l. ranks, Hafley spent 11 years on the collegiate sidelines with coaching stints at Worcester Polytechnic (2001), Albany (2002–05), Pittsburgh (2006–10), and Rutgers (2011). While at Rutgers, the Scarlet Knights were the ninth-ranked passing defense in the country and Duron Harmon earned first-team All-Big East honors and Logan Ryan received second-team accolades. Both Harmon and Ryan were drafted by and played for the New England Patriots. Additionally, you can see where recruiter Hafley has some inherent in situ P.R. type juice already Nor.-by-Nor-East hooked-up and good-to-go.

In 2012, Hafley made his N.f.l. coaching debut with the Tampa Bay Buccaneers. He joined the Bucs as assistant defensive backs coach and spent 2013 as the secondary coach/Fs/Ss. In 2013, Hafley oversaw a unit that helped Tampa Bay finish tied for third in the N.f.l. with 21 interceptions. On January 27, 2014, Hafley was hired by the Cleveland Browns to coach the secondary. Hafley would remain in this role for 2 seasons (2014–15), before being relieved of his duties due to a coaching overhaul. On January 24, 2016, Hafley was hired by San Francisco 49ers’ new head coach Chip Kelly to coach the defensive backs. In 2019, he was hired to be the co-defensive coordinator at Ohio State. Hafley quickly established himself as one of the best recruiters in the country, truly. He has a rep’ of: “a monster” defensive coach in the coaching sewing circles. And, he can also ink studs to LOI (letters of intent); what with being ranked ninth overall recruiter for the 2020 national recruiting class by 247Sports.com. On December 13, 2019, he was hired to be the head coach at Boston College after the firing of Steve Addazio. 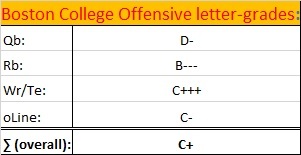 Boston College is 66th in Net Punting; and curiously enough, so is P1: Grant Nicholas Carlson. As this Texan “everything is bigger” High School P1 & K1 is gonna needs a bigger trophy case. Seriously, no joke. He won everything you can Friday Night Lights win leg-game-wise. 17 awards Tx. or USofA wise. Pretty much 1st-place/1st-string straight across too. …and he picked up a mere AAAAA Tx. bling for it to boot. Anyways… has a long F.G.A. make of a blistering 65-yards! So, Lee Majors bionic leg-swagg lives here. Tho’ as a college P1 he has been better than most, although not quite bionic itself. A.C.C. All-Academic Team @BeeCee.edu does count. His fakes (all runs for -2o total yards) have not counted (at least not for much). He has one career blocked-punt; and a career ave. of right at 42-yards. So, you almost gotta wonder if G.P. Carlson shoulda been place-kicker Carlson in lieu of P1 Carlson? Tho’ he is a r-Sr. and a Grad-School far right on the P1 experience curve for it as a 3.5-year starting P1. A Solid directional/hangtime P1, almost a good P1, not quite an epic P1.

Last year’s K1 (Danny Longman; who ain’t ½-bad) has been given the boot by this year’s K1: (Connor Lytton). Conner went to Frank Beamer H.S., or by way of localized Radford Bobcat fame. Where he was merely nationally ranked as the No. 5 scholastic kicker in the country by 247 Sports and No. 26 by ESPN! Not too bad, and neither is being named a 3-straight-seasons: Team Captain at R.H.S. Not sure I’ve ever read that one before? So, Mister Connor musta been doing something New River Valley, right. Anywho… 5′12″, 2oo lb., rookie or nugget voting year c.Lytton seriously has Howdy Dooty gonna get carded deep into his late 30’s looks. All this cowboy needs is a rope and Hyde and Zeke: the twin bears and he 31st.Oct. Costuming Contest wins. Easily at that. As kicking goes… Connor has range out into the late-40’s. Tho’ not quite as rangy beyond that. 48-yards max’ in H.S. and 49-yards max’ for the chowders says so. This year he is stellar enough, albeit on limited data points; check it… 85.7% on FGAs @6-7 and 100% on P.A.T.’s @15-15. The glitch is… only one F.G.A. ≥34-yards thus far! So, maybe he is all dat and a snap? Or, maybe not? Hard to tell on such collegiate leg-swing traction/truncation… still yet, Eye can tell you he has tallied zero passing or rushing attempts at any level. So, trickeration should be off the table here. (Ditto, no blocked kicks at any level, which is impressive).

Boston College Special Teams letter-grade: P1 is stronger, or at least mo’ settled than K1 is. This is a steady if unspectacular ST’s-unit; (less punt-returns) that does not beat itself. C+++ is about 72-strokes… or par for the course.

Number of Eagles who could soar @Tech=8, possibly 9.

The takeaway here is… it is hard to be very taken with either team. 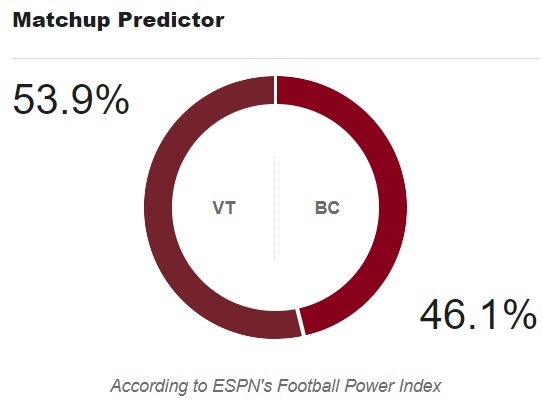 As this one almost has the look-n-feel of a game that nobody really wants to win.

As each team can run a bit, defend a bit, and then misses things more than a little bit as tidbits go. On top of that, neither one seems especially ‘twitchy’ or ‘bursty’ upon breaking-tape. Like two lowercase TKO or domestic 110v squads.

As a breakout offensive performance from whomever from whichever side…
…could surely go a looooooong way to deciding things here.

xxx‘s & ooo‘s
…not real sure there is a clearly superior Staff here?
…this one best grades as ‘incomplete’ (pun, somewhat intended this year…)

#ChallangeA.c.c.epted… there are 1,440 minutes in a day and we gotta put in a lotta time-keeper work to lift this one out on the road here. Prolly at least 55-minutes give/take.

the optics...
…well, offensively? It appears the (slightly) “on the come” Fu’fense has the check-mark, edge! (And “nyet comrades”, Eye ain’t frontin’, or possin’, or stirring any pots. As anything the Fu’fense can do inert, the BeeCee offense can do… inertHER. BeeCee Beta Stats scores very po’ in Explosion (1o9th) and Drive Efficiency (1o7th) and also in Negative Drives. Their only alibi is having faced a decent set of halt-units. Although, they notched nothing north of 90th best as Offensive rankings go! (With the Fu’fense 76th overall, and better than average on Negative Drives and Rushing Efficiency itself). O EDGE=VeeTee.

the skinny...
…well, defensively? It appears these two are in a near halt-unit dead-heat. What with VeeTee being 57th and BeeCee being 52nd overall. The only real differing’s Eye could data-mine were… Drive Efficiency, which slightly favored BeeCee. And then we found that VeeTee was even better in Play Efficiency and VeeTee has been in vs. mucho higher-octane O’s vis-à-vis. The most alpha beta-stats nugget Eye could dig up overall however is… both teams beta test very well vs. the opposing run-shapes. This really does hint that someone is gonna have to air something out to break this overall stop-unit tie, here. D EDGE=push.

Fu’rther…
…here are your Vegas lines… as Eye needs to finish this V.P.I. preview, A.S.A.P.!

…so, check this mess out… I ran the recent numbers on each saggy/baggy football team…

And unlike @Gah.Tech, there are even fewer freak/play-makers out there in this contest here.

Meaning, this week if you combined these two, you’d have about 80-cents on the dollar.

…these were, mo’ in line with my expectations. The Fu’fense is about ➕3o ypg up, nearly all of which was down in the trenches. The BeeCee run-fighters however have gone user-friendly by a whopping ➕80 mo’ ypg allowed! WoW! With the BeeCee O in the hole by a hurtful ➖79 ypg contraction, most of it stillborn on the ground. With O&M eggs and j.Ham now going acoustic or unplugged by a noticeable ➖60 ypg to the worse. Nearly all of which was grounded if you will. EDGE=VeeTee, as only the V.P.I. O behaved correctly here. Tho’ both programs look suspect recently overall to be transparent.

H/A splits,
…these were, very curious… as the Fu’fesne is better, in particular, threw the airwaves (➕45 ypg) as Road Warriors. Tho’ the killer part was the Bostonian run-fill, which nearly super improved @Home, at nearly ➕80 fewer ypg allowed! The BeeCee O is likewise better @Home, by nearly ➕70 ypg (pretty evenly run and pass-bonus split alike). O&M eggs and j.Ham only moved downward by about 30′ or one 1st-down allowed, so no biggie there. EDGE=BeeCee, mo’ than Eye expected to be extra clear.

Our handy dandy friend, the so-called: Forum Guide of Graham Houston fame
is merely calling for a 10-point VicTory in this one here.

…Eye ain’t gonna josh yah folks— this one could get Fu’gly.

As some Tinkerbell is gonna Peter someone’s Pan and make the other until put the Michael Flatley costume from last Sunday night back down. As Chestnut Hill is prolly a pretty good place to admire your allergies to (O).

…which seems to wanna encode for this one being a 1-play or a single-shot game, either way.

Or, someone not named you already ate all the left-Ø‘ver candy!

…as alluded to above… methinks we sees two static Norris Hall teams that are just that.
Mo’ parts static and less parts, dynamic.

…and because of just ^that^… -and you are reading it here, first- Eye would not die of shock if @BeeCee or home for Duke (somehow) jumps up and bites the good guys.

As nobody is a sure-thing or a sure-fit, here.

A.c.c.ordingly, if offensive pigskin is your thang?
You’ve prolly come to the ‘rong place.

If defense gridironing is your druthers?
You will dig these two ½ brothers from the same mother.

As this one could very well be a race to 20.

The first one there wins…

As these two O’s is unavailable,
…in a word. 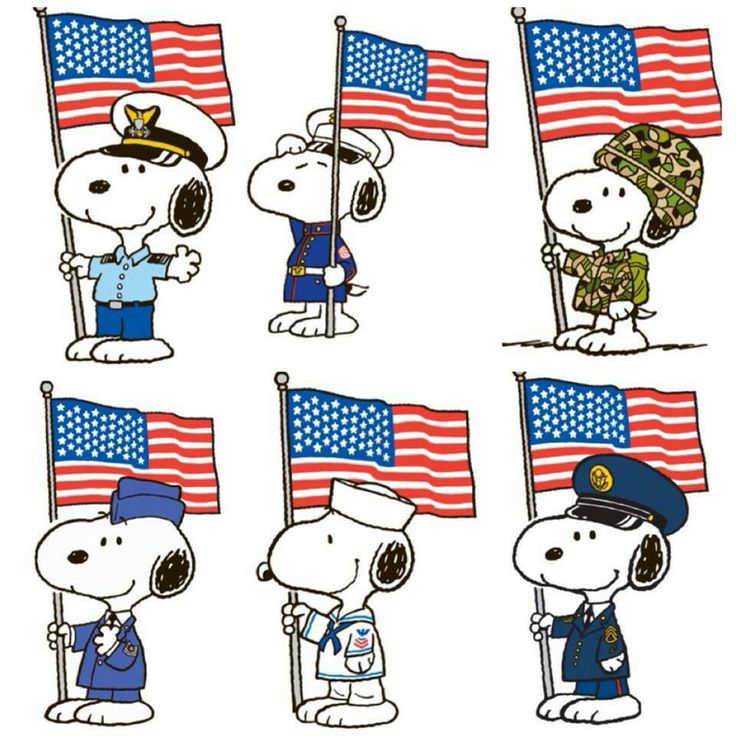