Virginia Tech men’s basketball returns after a long-ass roadie down to the Pineapple State with what most R.A.T.T. peeps prolly actually expected.

The Hokies went a not unexpected 1-2 overall and yet they one-upped ex-#1 Michigan State. Then proceeded to play with something south of a lotta energy vs. Dayton and then promptly ‘died by the 3-point sword’ vs. a frontcourt severely hurting B.Y.U. Or in other words, “will the real VeeTee please stand up, please stand up!” And that all being said… this is prolly not the best 8 up 1 down (no.1o ranked) opponent to get the best or most R.A.T.T. self-assessment against. Tho’ if scoring is your thang you’ve come to the right place. Nevertheless, what you wanna know is… who is gonna win and by how much; right? Read on, to find… out!

Coach Krzyzewski has the most wins of any coach in college basketball history. Coach-K became the first Division I men’s basketball coach to reach 1,000 wins. And is only a six-time national coach of the year and a five-time A.c.c. coach of the year; that’s all. He is a two-time inductee into the Naismith Memorial Basketball Hall of Fame, in 2001 for his individual coaching career and in 2010 as part of the collective induction of the “Dream Team.”

Additionally… Coach-K has only won 24 (varying) Coaching Awards, he is National Polish American Sports Hall of Fame inductee (class of 1991), he was the 2011: Sports Illustrated “Sportsman of the Year”, the United States Military Academy named the “Coach Krzyzewski Teaching Character Through Sports Award for him, and he was merely inducted as a Laureate of The Lincoln Academy of Illinois and awarded the Order of Lincoln (the State’s highest honor) by the Governor of Illinois in 2014 in the area of sports. That’s, it! What a bum.

(score this one as a Weakness or Strength as you deign fit… tho’ this is a more verbally expressive Duke team than often seen under coach-K… wonder if this loosening speaks to their tongue-tied turnovers?)

Sr. year, 6′7″, 222 lb. Swing, from down-under, would be Jack White mate. Jack hails from Traralgon, Victoria, Australia by way of the fabled Australian Institute of Sport. Jack is clearly highly thought of as you seldom see many Team Captain’s checking in from the bench. Jack nets you 3 ppg on a nice 4.8 rpg, a swipe, a swat and even 1.5 dimes in relief. Only his shooting lags a bit as he’s a better more skillful baller than his 37.5% so far suggests. As the word is/was that he fields a: ‘diverse’ shooting game and his D and rebounding are pretty useful enough as is. As Jack only has one Aussie gold-medal and was only Mr. Basketball for the state of: Victoria on Paul Hogan’s homecourt.

Javin DeLaurier is a 6′10″, 238 lb. final-year Shipman, Va. backyard escapee. Javin has been a careerist sub’ at Duke with 16 overall starts. Javin is a 4.3 ppg and 4.6 rpg contributor, and he has more of an offensive put-back machine and has a hack-attack rep’ at this stage of his tenure @Duke. Although he has not missed a shot in the last 10-days to boot. So there is that…

6′6″ and string bean 19o lb. Alex O’Connell (who actually found four-pounds) kinda looks like he walked off The Outsiders set as an underfed “greaser” who put on some kayoed “soc’s” Jordache clothing and effortlessly fit right in. Seriously, Alex looks the L.L. Bean boy-model part and he’s basically the lowest-ranked (no.80) national recruit in the Duke rotation— poor Duke! Alex and his 4.2 pine-squad ppg are said to be dynamite in the open-court and he can dial a floor spreading long-distance at a mere A.c.c. leading 54% on his 3’s two years ago down to 39% last season and now plummeting to a mere 22.2% from deep! A.K.A: “ALL Raleigh-Durham slump-busting quality girls please report to the Duke dancefloor, STAT!” As I had thought this kid to be a Pro’ just on his depth alone; tho’ now who knows? Plus he Alex courts one of the rare stop-on-a-dime pull-up games this side of the Virginia Squires and a certain Dr. who made a lotta “J”‘s the very same way. With 2.6 rpg and .8 spg just ’cause. 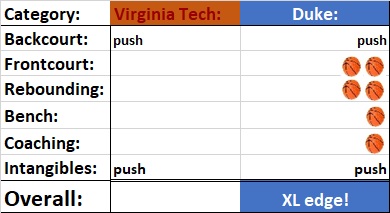 the takeaway:
The takeaway here is… honestly friends… how did we upset Magic Johnson State? 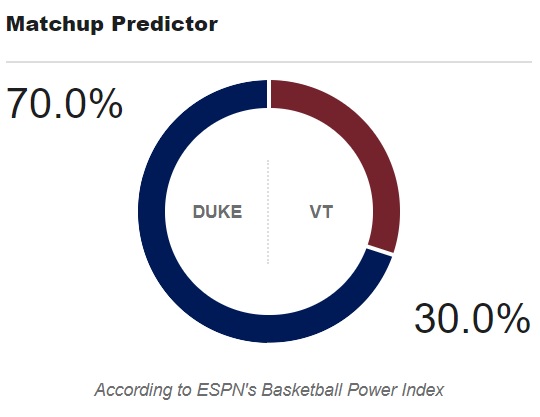 I mean, that’s a helluva a win and all… tho’ if you had to place your hand on the TSL.com Bible, would you say that the first game or the second two Maui Tournament games were truer to O&M form?

As the way Eye see things… we’ve got a good underclassman corps, we’ve got a nearly shocking uptick in recruiting under M.Young, a seemingly better than expected overall program trajectory and after that?

We still have next to nothing on the inside in the paint. We are still a couple of seasons away from fully assimilating this entirely systemic centric coach and that’s gonna take a minute or three. Or in other words, yours is a brave new world if you pick Vah.Tech to {sic: successfully} Duke this one out here.

Our handy-dandy friend the so-called Forum Guide of Graham Houston fame is calling for a next time Duke check back as this is their A.c.c. opener for this 2019-2020 campaign.

The most recent 5-game metrics say that… Duke is now up +3% in shooting percentage margin for the last fortnight (close to split), Duke is up +6% in 3-point percentage margin (with VT shooting better yet defensing the 3-ball much much worse of late), and Duke is up the very same +8 in Windex work or in rebounding margin.

As said above, won’t get a better-upset looksee at a powerhouse such as Duke than this. Running @Home defending our very own Cassell vs. a dented Duke backcourt says so.

Or in other words… a big Duke team just got taller even if it will be a bit longer before their Top-5 rotation is totally recovered.

From what I can see… Duke may have dropped some open-court talent (Stanley) though it gained even more down low in the paint.

Right, where coach M.Young and company have very little resistance to offer and nearly even less size than that. As Duke currently reconstructed fields not less than five full guys in their playing-rotation north of our tallest starter. And that is only compound-fractured all the more when you consider they are north on talent in addition to raw match-up playground pick the tallest kid first, foibles.

Because as nutty as this may read… I truly thought we had a better chance to fun-n-gun with Duke in the open floor, and just take our home-standing chances from deep in the familiar sight-lines of our own backyard than we do vs. heighty Duke.

Now?
Well, not so much…
…as our freshmanic squad has nobody to check Carey Junior.
💪