Virginia Tech football is hurtin’ from the squirtin’.

The Hokies are shakin’ from the bacon. Oinkin’ from the bonkin’ Truly. And Eye do have to wonder out loud here… why did oh so many of you refu’se to take the ’21 Maryland Bowl mule-kick for what it R.A.T.T. was? A 2o22… hint. Tho’ nooooooooo, no; you be smokin’ the O&M Ag.School grass is always greener. And yet here we 2 up vs. 8 down, on our way to 2-9, and then on to a hard-to-choose just which one sucks mo’ rivalry game sister-kisser; (IF it is still played, Coach God Help). Still yet, there Eye go again… always putting the cart before the horse. So, who wants to blacken my Eye and “duke” it out?

…as the Game of Life is not just short men.

It is shorter every… play!

As poor #45. Garbutt is truly fortunate to have anything other than spaghetti left in his right knee after this blatant hi-lo (entirely illegal) block off-T from Duke.

The LOS (line-of-sight) is obscured, tho’ he got it caught (toe/turf) and then it twisted a bit. A cruel mistress this oblong spheroid yet again. (St.Culbreth bless).

3Q 3:59 remaining:
So, Eye heard from a very strong football source post-game… that the Staff felt they were not @O.d.u. aggressive. Maybe another punch or three coulda helped as the favorite (in theory) punching downhill over there. Granted. However, and hence, we are now a whopping 117th best in 4th-down converts. Our K1 ranks 8th most accurate in all the land; we have a very decent Punt game if you wanna shorten the field with that.

Or in other words… the mo’ Eye age? The more and more and more… I realize that you take the damn points. Anytime, any (field-positon) where.
Period.

And not so much.

As he and the Dukie O went Denna Smith, 4-corners and seriously let the air outta the ‘ball to close the all over less the shouting and clearly already decided lopsided fat-lady encored show.

His most gracious +300% advantage in T.O.P. (time of possession) in the final Quarter of scrumming coulda done close to whatever he wanted it to do. Instead of ‘look at me’ running up the score, Coach Elko went 27-overload credit hours per semester; i.e., all class. And allowed us to ‘bend the knee’.

“Mercy” is not a sin. Tho’ being piggy and getting gluttony down the road return of served, is.

3-cheers @Coach Mike.
One of the few P5 good guys. 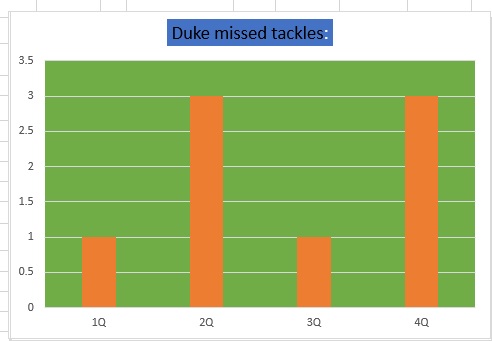 TTT Analysis:
Well, this one pretty well spot-on predicts what it is supposed to predict; n’est-ce pas?

Eye mean… unless it is an Option -can’t drive greater than 55, or pass- Offense?
You just gotta pressure the opposing Qb1 mo’ than this.

And you gotta put(s) some mud in his eye and on his threads to boot when he runs this many (selfie) called R.P.O. keepers. Or as the godfather of jumpsuits -Al Davis- once said: “The other team’s Korterback must go down and he must go down hard.”

Yah. 10-4. Roger (Staubach) that.
And yet when looking back on my ’22 notes— the Prybar self-stylized D does NOT score that many Qb-contacts. A Jody Foster movie they just ain’t. Why=???

Tho’ other than the statue -esque O.d.u. and BeeCee pocketed Qb’s -who were planted like, trees- our Qb-contacts have dropped every week since U.n.c.! Again, why=???

Tackling Analysis:
Yet again, on a per/play basis… this does not grade all that awful. Even when including the double-whiffs that did give up a got (mercifully) called “whistle” back housing Duke jaunt for 6.

However, then Eye had the notion (‘thx’ @Guardian Angel) to study it on a chronometric or per time of possession (T.O.P.) basis. As it is pretty hard to tackle well when you are down an unbelievable –186% in T.O.P. itself!

I mean… even Jerry Rice (may) not have that many S&C or wind-game hills left in him.
To compound fracture the brain of all of that all the mo’… we have no halt-unit depth.
(Most) of our Top-11 defenders have to go at least 11 to 11.5 of our
12-round bouts. And some go to the scorecards or full-distance.
🤔

’bout time we found them some breathers, O2 masks, and at least a little offensive help.
As our defenders got one, that is (1) drive outta our O ≥14o… seconds.

The O had 40% of their drives go for ≤1o5 seconds.
And then they had two drives that combo’ed for… 85-seconds… combined!

So, I suppose… this level of stopping is fair-to-middling when you are sucking— as in… air.

LOL… just how well should you tackle getting that much rest just like dat? 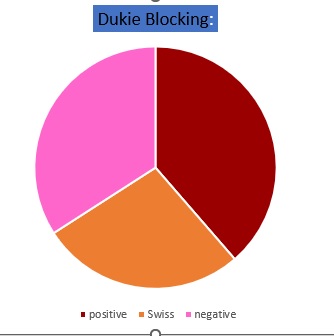 Lo.FM Analysis:
Well, and to further the thesi-of-thought above… our D opened pretty dang tight on inflicting Lo.FM’s on a pretty slickster, Duke O. Surprisingly, and to their credit(s).

Dukes’ playing with 0% starting G1’s prolly did help a mite… tho’, still; we were the aforementioned pretty tight. Right up until we were not. Like a rookie year baller hitting the D-1 P5 roundball wall around game no.2o or so. We have got to get this top-11 healthy and then we have GOT to get them some rest. Any rest; or hooVa might just wrest this Commonwealth Cup back.

On O in Lo.FM terms… things were much mo’ even… and frankly the Lo.FM only predicted a 1-play VomiT. Not quote taking a Lo.FM L; however, far from the Lo.FM’s best hair day.

As this one was shocking even in hirsute terms; tho’ yet agains, this is why you run the substance over style maths, not yo’ mouf.

The only real Lo.FM difference was we hurt ourselves (the Picked pass) one time too many and Duke did not. Their Qb1 won a moderate-sized poise contest as opposed to posing itself.

Blocking Analysis:
Well, it graded out as a near even, push, tied kinda day.
Which you nearly never ever pie-chart see!

And the oddball truly screwy part is… for the 2nd-straight week, we did ‘okay’ enuff pushing and shoving vs. the top-2 dirters for the opposing team. Not good, ‘okay’; only to see a backside individual fail(s) collapse things.

We are folding just a little better (to the 2nd-level), hence the four to five-point averages the run-shape honks are horning. The caveat is, we have no true 5×5 altogether now line-of-scrimmaging dominating push. And no spring anybody for anything extra downfield behind the depth of the Umpire blocking. Never mind our pass pro’ V-cup that is s dribble glass and has sprung a leak(s) of late in aerial terms.

Do wanna show love @#12, (Stephen Gosnell). As he actually freakin’ hit peeps downfield. Got about ¾’ers of a steal in if he had only taken the Dukie Nickle guy dime-piece out (or: off his feet to the carpet). Tho’, at least this kid wants to hit somebody. He and Conner have not decided to pack it in, tank, and go Shamü of Sea World yesteryear fame. Great on them.

You want scrappers throwing rocks in your trench when the O&M chips get big-n-blue.

…not much to be taken with here folks.

These very much were two ships passing in the proverbial nite…

Although the U.s.s. Duck Pond was shipping a lotta h2o and the pumps were not keepin’ up later on.

As Elko has Duke trending up, while the VeeTee submersible is trending down.

To say anything else is to lie and as we all know… lying is fo’ rugs.

Things are beginning to… cliqué? 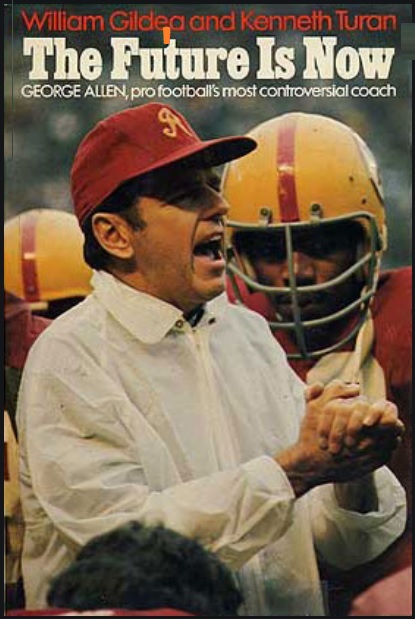 We were very concerned by what we saw… as in: there are (now) emerging cliqués here, and their clustering is entirely obvious is the nicest way Eye can put it.

Meaning: if he is not ’22 end-game entirely careful… Pry is gonna be in for one cultural redo of a year no.2 necessity-based spring. Same as the great Coach Allen…

He has done himself and his future no favors of late— and the truly frightening part is… why?

Because, and beyond that– things are about to begin to get away from him if he is not
really ’23 and beyond, remaining ’22, careful.

…I woulda said our special teams for the institution of (potential) game-changing speedsters.
Tho’ we gotta kick that F.G.A. before I can, so… 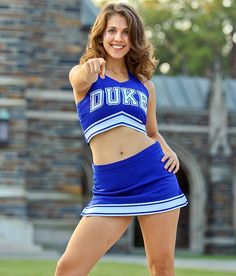 formulae football:
Surely favors the team that was up nearly +2oo% in T.O.P. (time of possession.

Eye mean, how could it not?

Where’s the Tau Sigma Lambda I used to know?

“Give me Liberty or give me a buncha ‘go’ plays pocketed for archrival hooVa.”

As the semi-final round of the ’22 Class AAAAA Va. State Football Championship is upon us.

Message board ‘flamers’ rejoice… as we are down or bottoming out in the in-state standings as I type… no joke. Check it out, men…

…you do the uncommonwealth, maths!

We are getting ‘better’!

There is no denying it now.
As we just pitched a shutout on yellow laundry or penalties!
That is not Owens Dinning Hall small potatoes for the 4th from the last-place penalized team, right?

I mean, that is an improvement; n’est-ce pas?

On top of all of dat you ask?
We are…

Never mind the 24 outta 32 Team Categories I track each and every week for opponent analysis being 1o4th best or worse. No. Piss on that; as that is something only a true-blue O&M pot stirrer would convey.

Additionally… of the 29 F.B.S. schools with new football coaches this year, only Akron and UMass have a worst record than Pry and VeeTee.

Nevertheless, we are the 142nd-best college football team in the 131-team D-1 land.

Which makes us nationally ranked as the 21st-best D-1aa team in all the land, period.

Put that in your peace pipe #Firebugs and smoke on dat.

And although Elon may have jumped us— we still lead N.C. Central AND Tenn-Martin, both, each; alike… baa-bee!

The only John Wayne calculus that remains is…

…how many do we have left that are surefire gonna go to Liberty and “duke” it out?

This is not a shiny season… and then all horrifically unthinkable instate things migrated over to poor hooVa.

And suddenly we see once again just how much football does not actually, mean…