Today’s word of the day is… well, Duke! 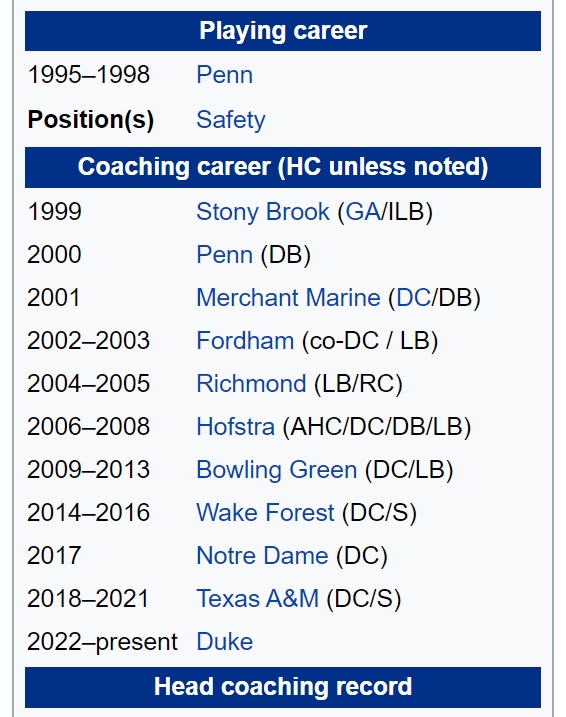 Raised in South Brunswick, New Jersey, Baller Elko graduated in 1995 from South Brunswick High School, where he played baseball, and basketball and was the Qb1 for the school’s football team. He was recognized by the coaches of the Greater Middlesex Conference as the league’s top quarterback in 1994 and was inducted into the school’s athletic hall of fame in 2o12. He graduated from the University of Pennsylvania, where he played for the Penn Quakers football team that won the Ivy League championship in 1998; as an Fs1 mind yah. So, he knows both sidelines of throw fits or passing fancies if you will.

Prior to being named defensive coordinator at Notre Dame, Elko had coached under Dave Clawson for 12 seasons. He spent two seasons with Clawson at both Fordham and Richmond, five seasons with him at Bowling Green, and three seasons with Clawson at Wake Forest. During the 2o16 season, Elko’s Wake Forest defense ranked in the top 2o for NCAA Division I Football Bowl Subdivision (FBS) in defensive touchdowns scored, turnovers, red zone defense, sacks, and scoring defense. Alabama, Clemson, and Washington, the three other FBS teams to accomplish this on defense, were among the four teams selected to compete in that season’s College Football Playoff postseason tournament. The Fighting Irish fired DC Brian VanGorder the prior September after Notre Dame started the season with a 1–3 record and a defense ranked third from the bottom of the FBS. On January 4, 2o18, Elko was hired by Jimbo Fisher as the defensive coordinator at Texas A&M inking a three-year deal averaging $1.8M/year. Then he got a boost to being the 4th highest-paid ass.coach ($2.1 large) in all the land.

In Elko’s 23 years of coaching, 18 have been spent as a defensive coordinator, including 13 at the FBS level. He has twice been named a semifinalist for the Frank Broyles Award (2o17 and 2o21), which is given annually to the top assistant coach in college football. He began his coaching career at Stony Brook in 1999 where he guided the linebackers in the fall and the defensive backs in the spring. Elko’s coaching experience also includes one-year stints at the U.S. Merchant Marine Academy (2oo1), where he served as defensive coordinator, and at his alma mater, the University of Pennsylvania (2ooo), directing the secondary. The Quakers won the 2ooo Ivy League title during his lone season on staff.

He is a defensive guy who has surely cut his defensive teeth along the way. Granted. As his last ten, that’s (1o) Total Defenses (as a top-kick Defensive Coordinator) have all ranked ≤41st in D-1 ball or better. (With an apex predator of 6th best in those last ten Total D’s). That is pretty sporty by me. Does that a big whistle blow though?
Time=tell…

Poppa-bear Elko is married to the former Michelle Madison of Franklinville, N.J., and they are
the parents of three children Michael, Andrew, and Kaitlyn. 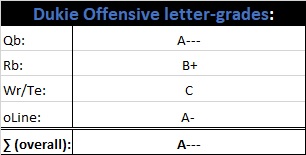 This could be the strongest part of Duke’s team… no, that is not an attempt (get it?) at droll humor. Duke also added a graduate transfer long snapper from UMass, Evan Deckers, during the semester break. He is one of the best at this as pure specialists go. And he took part in spring practice to get comfortable with his new teammates. That is a plus.

Duke was a nifty 12th-best in Net Punting last year, (now: 4oth) and so is Duke P1, Porter Wilson. Porter goes a heighty-looking 6′5″, 225 lbs. as an r-Soph. Punter. So, aim high on your block point here Hokies. Porter was merely the No. 12 punter in the country as ranked by 247Sports and a *** or three-star prospect per ESPN. Porter ran T&F in high school where he took all-region honors in the discus. So, you would have to think both a leggy and army punt fake will eventually be in play for Duke. Porter is more of a hangtime or seal type of Punter. He does not see many of his punts returned. Improved leg strength; and he did recently have a very good 70’s “Dear Penthouse Forum…” looking porn-stachê, tho’ it looks like he gave his upper lip the axe. Too bad too… (and, this P1 is ‘whispered’ to have leg1 in the A.c.c.). As he has a mess of punts ≥55-yards already.

Duke’s Kicker is Charlie Ham. And Charlie be totally rockin’ an actually ginger-flavored Greg Brady ‘fro too! I actually do not (quite) hate it— with no word yet from: Flock of Seagulls or Ah-Ha. That attempt at Rubik’s Cube era humor aside… Charlie and his Joe Stalin hair that just won’t stop… were both listed as the No. 7 Kicker in the country per ESPN.com. That does not suck, and neither does this collegiately 87% last year. Tho’ sophomore-slumped all the way down to nearly 2 outta 3 so far in 2o21. c.Ham is a: 6′2″, 180 lb. r-Soph. year K1, with a menudo/spice-boy top. Did Eye mention his hair, yet? As Charlie has already logged one more Special-Teams stop (i.e., tackle) than you and I have combined this campaign. The ‘whispers’ say Charlie has touchback range on Kickoffs and at least mid-55’s on FGAs. Even if he seems way more game-log compatible out to his mid-40s give/take. Charlie is also a back-to-back-to-back, or threepeat Georgia State Champion; and a #1 National Ranking to boot! Albeit in the sissy zebra-ball flavored version of foütball. No wonder I’ma making fun of your hair Charlie… with no word yet from Bosley, either. Doh! However, and in all candor, do not die of shock if Duke has found themselves a 4-year starting Place-Kicker. The only knock, I could find is that he’s had a few PATs sent back here-n-there. As this is a line-drive style so-called punch-Kicker.

Well, now Eye see that Charlie (St.Xenia bless) is out due to: “PERSONAL”. It is unclear who will place-kick for Duke now.

Dukie Special Teams letter-grade:
“I” or incomplete sans their K1 with no real experience at place-kicker to sub’ in for him. IF, he was/is right this is an A- group of specialists. maybe even a flat A.

Number of  Dukies who could duke it out @Tech=twelveteen+. 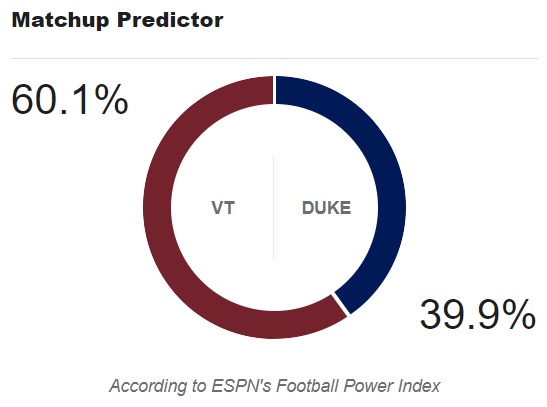 …the takeaway here is… not to be too taken with either Year #1 coach either way.

Both of these (seemingly) defensive savants (Coach Prybar and Coach Elko) need a season, or four.

So, give them some room to breathe and to get their guys in their way and then see where they, are…

(Or, did that just make too much, sense?)

However, Duke is way way up and VeeTee is about the same on… ‘down’.

And yet here we fanbase emotions moving in the opposite directions are…
…go fig’ this oblong spheroid yet again?!?

…as there is literally nuttin’ ‘rong here.

They even court some ‘explosion’ this campaign to boot! BONUS: the VeeTee D is a whopping 99th best in run-Beta and nearly the same on long-drives Beta. (i.e., the Eye was ‘fatigue makes 🐈’s of us all… puuuurfectly correct!)

The Dukie D was… Wichita State.
Or, a real live shocker!

As in… they score nearly as poorly as we did. In very particular vs. the Pass, on Explosive plays allowed and as ‘fatigue’ goes on longer drives. w0w!

Other than power… this is a very sharp oLine; serrated even.

Our Dline was closer, in particular in penetrating and physicality itself…
…then, however, our Oline came in ranked between 92nd and 122nd best and it’s it and that’s that.

EDGE=Duke, in particular, when on D in head-to-head Battle of Somme terms.

Duke on the other foot has rushed for a bicentennial 200-yards (or more) in six games this season.

200… that is your in-game barometer men.

#ChallangeA.c.c.epted… there are 1,440 minutes in a day and VeeTee must yet again play all 6o-minutes (or, mo’) to win here. 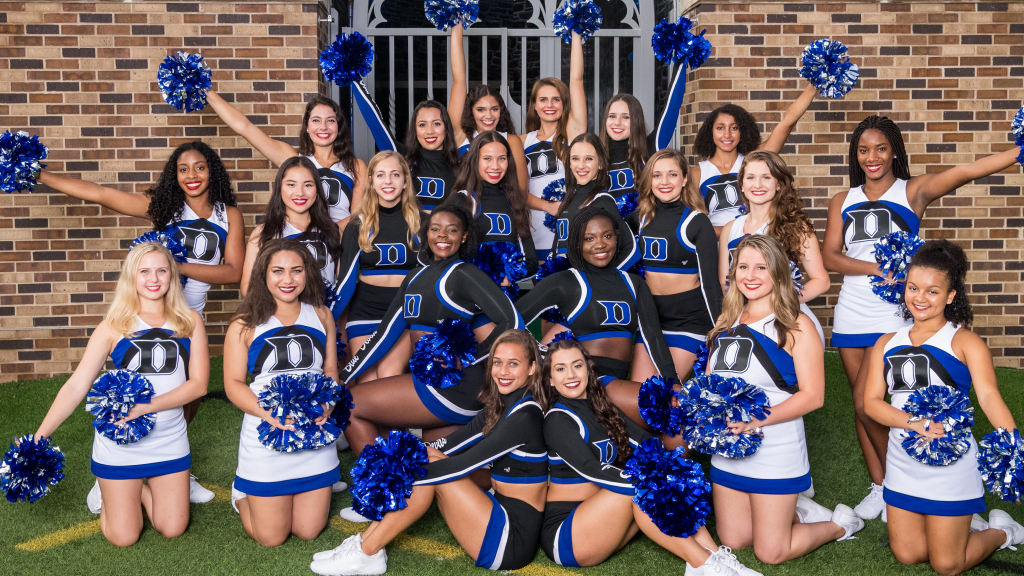 Lo.FM Analysis:
Well, this is a squirrelly one to grade men. As Duke has holes here. The key is 1st-down for the VeeTee O. It could all begin -or all end- right there. Although k.Smith long or something downfield does offer a glimmer of O&M hope. EDGE=Duke. Though not by a metric ton.

TTT Analysis:
Well, the Dukies win oLine wise, tho’ their dLine gunning for g.Wells -if/when- we really have to chase is a soberstreet thought. EDGE=Duke. (And it could widen a bit if this one gets outta hand).

Fu’rther… Σ Yards… since the L streak began you ask?

VeeTee is down in a backbreaking –963 yardage deficit hole!
Over the same time span, Duke was also down –126-yards!

3-game splits…
…here we see that the VeeTee O has contracted by –35-yards; pretty evenly run and pass worsening split too. The Dukie O has actually improved by a mere ~1st down gained (+10 ypg). Although, they are up nearly +40 ypg on the ground! Even at their aerial expense, Duke is really running downhill hard of late. The V.P.I. D has softened by nearly 60 extra ypg allowed of late. Virtually all of it is in air-waves frequent flyer terms. The Dukie D has gotten about 25-ypg laxer of late as well. All of it threw atmospherically or passing ypg allowed terms.
EDGE=Duke, as “3 things can happen when you throw and 2 of ’em are bad.”

Home/Away splits…
…here we see that the blind hog Hokie O actually finds a bonus 1st-down (1o ypg) out on the road, somehow? We also see that the Duke O antes up +40-yards to the good @Home. Same as above, nearly all down in the dirt as bonus carrying the mail goes. Now here it gets noticeable, as the Gobbler D gives up an extra user-friendly 40-ypg allowed out on the road. Most of which is down in the au natural grass or in terms of hemorrhaging rushing ypg. The Duke D actually tightens up @home by a handsome 5o fewer ypg allowed @home. Every single inch of which was in pass-defense improvementS, quite plural!
EDGE=Duke. Tho’ does the Duke pass-D positive trend mean as much here?

Our handy dandy friend, the so-called: Forum Guide of Graham Houston fame is merely calling for a totally Duked-out and Duked-up azz-beating or routing 46-point VomiT. Or, 23-points when taken pro rata. The truly oddball and extremely outlying part was… head-to-head VeeTee split the Forum Guide 2-2 or .5oo. And yet Duke really punked the two common round-robin opponents that they did actually beat. Meaning… you gotta wonder if they could punk us if this one gets away from us for punking no.3?

…here in the sportlight…

…the limelight focused is all on the other club.

And Frankly (foreshadowing intended) they merit it just the same.
As you could argue these are two Coastal ships passing in the… nite…

As in…, Duke is making their A.c.c. Coach of the Year (for: Elko); and he will surely garner some National C.O.T.Y. votes as well. The ‘leverage’ is all his.

And if we really are getting: ‘better’?
Right about now would be a very good time!

The only calculus for you is… just how much longer will the final 18o-minutes, feel?

Well, and ‘aye” I know that wells are for water… nevertheless; there is a lot here that favors Duke in this one here. There really is.

Nevertheless, Eye did learn me 3-whole Dukie/new-staff thingys worth passing or picture painting on…

That’s the (semi) good news… the news-news is… can you win a shootout down on Tobacco Road?

So, in order for us to pull an 11-point upsetting win, we will have to fight like we’re the 3rd Beaver in line to board the Ark when it is starting to rain!! 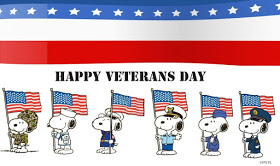