Lottsa points stranded in Pirate terms or left marooned in Hokie vernacular out in the field in this one folks!

Anywhere between 20 and 40, maybe even a few more, as that massive “sigh” of relief you heard was from the Vegas sports-books that were set up to take a total stomping on the over, in what could have and maybe even should have been a most offensive made for TV electrifying fight to the finish.

As each head coach left game winning FGA’s and numerous other potential scoring plays shutout, down in the New River Valley.

Well, actually this one was a fight to the finish.

As it was the best of times and the worst of times in succession for each side.

Total feast or famine Dickens of a contest, and yet it was the Pirates who had precisely one more bone left to pick in the end.

3Q duration remaining:
Notice the fresh athletic tape under poor R.Mallack’s left-knee after he got his already rebuilt left-knee twisted (on top of a bad ankle) down nearly our own endzone in the first-half of play. (big PIC link) 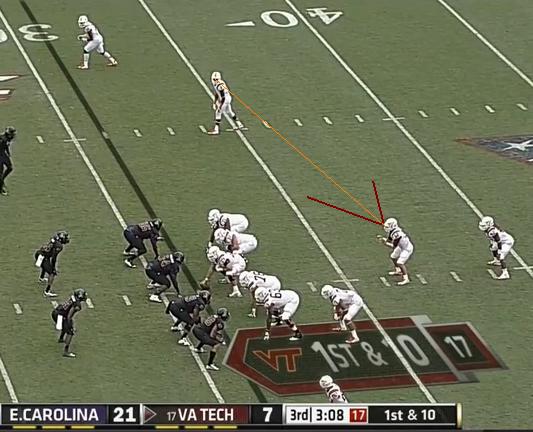 3Q 10:26 remaining:
Nice to see Seth Dooley hustling and stealing the little dweeby looking #86 at the end of this punt coverage play right at the very last mid-section second of your screen. As Seth has been a bit underwhelming as a relief-De thus far. (whereas Alford has pleasantly surprised and done a little better)

3Q 3:o2 remaining:
Watch Ford never ever take his eyes off of Brewer pre-snap as a tell-tale giveaway that the bubble-screen (to him) was coming. IF I am a Cb or Safety and I see this? I am gunning for the pick-6 all-day, all the way.

4Q season remaining:
Mr. Stroman (#3), is gonna break one, and take at least one Punt Return to the house. It’s not so much a matter of if, as it is, when. As this half-pint sized 161 lb. rail thin baller has some speed and he has some swivel in his hips to go with that. Most provocative Punt Return specialist since Victor “macho” Harris was on campus.

4Q 2:08 remaining: (pic below)
Add Jon McLaughlin to the injury list, and although the film is in a scrolling blind-spot at the instance of impact, it is clear that the E.c.u. Ng accidentally slid into big Jon’s left leg at the tail end of this one. (looks to be an ankle roll-up to me)

4Q game remaining:
Slick call by Carden here, “naked Qb 15-sneak, on one, on one, ready …BREAK!” Awesome salesmanship in the faked plunge element by Mister Tattoo endzone flex machine as well. +1 @Shane for this. 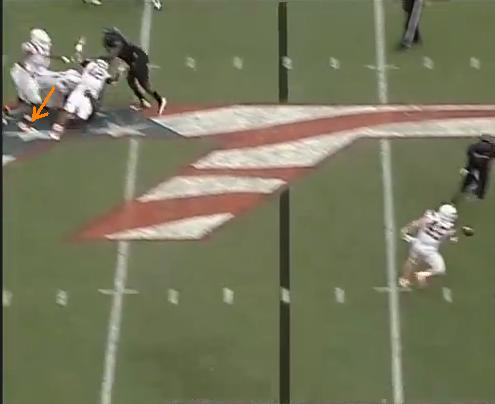 4Q 0:oo remaining:
An Endzone Hail Mary overthrow of a good 5-yards? Kinda like an N.b.a. inbouds pass that hits nobody and goes harmlessly outta bounds itself. Meh; although, at least we now officially know that my boy has at least a 51 yard arm, prolly more than that in point of fact.

On tape, all less 14 plays from E.c.u., Virginia Tech did everything less win this football game, including pressure and/or hit E.c.u. Qb Shane Carden all, day, long. As that sound you just heard, was the TTT metric going Lifetime hyphen three overall. As the much vaunted TTT just took its third L ever.  (the Lo.FM stands in at lifetime-2)

As the early hits on Brewer (read: ~first 20 minutes and first four series) were pretty serial indeed. This left a lasting impression on the viewer and on the psyche of M.Brewer -who of all things- actually turtled on film, ducked a punch and went down on a phantom hit at one point in quarter number two! I omitted that in part I, as I like the kid that dang much. Even as one-man self preservation society as that looked on film … can you really blame the guy? Kinda like in boxing when we are taught to take a knee and take the full 10-count in lieu of getting coldcocked and therefore knocked the (bleep) out. Tough to win that fight when you wake up in your very own dressing room with a smelling-salt shoved up each nostril in a revival attempt that you would otherwise only have seen on an old-school U.H.F. channel number somewhere in the 50’s, on any given 1970’s Sunday morning.

So I’ll give my boy a free-pass (pun intended) just this one time. As he may have only been effectively self-electing to take a knee and make it to the bell and therefore live to fight another day.  (and it is fair to wonder out loud if a kinder gentler Referee might have actually waved this one off, and stopped M.Brewer’s fight on a T.K.O. in the equivalent of the 4th round) 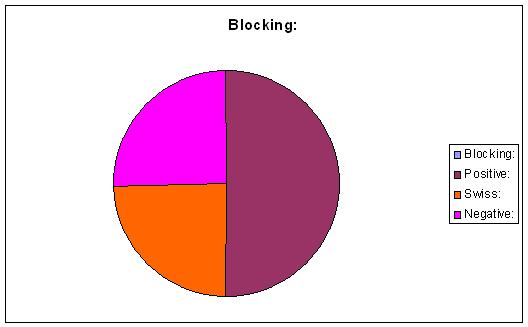 Further, and I wish I had officially charted this one in fully objectively quantified terms, nevertheless, Virginia Tech fielded at least 2-3 pass plays and no less than a solid 5-6 rushing plays that were 1 cut, 1 extra block or just 1 busted tackle from the endzone. As the Hokie staff had to be sick to their stomachs’ watching this one on film. As we left opportunity after opportunity out on Worsham Field turf through no fault of E.c.u.’s own.

Hopefully, that will all get ironed out and then actually get better;  as this offense is nowhere near its ceiling, which is prolly a good 14-15 months away.

Tackling got better, no really, as in it realllllly got better folks. As see-what-you-hit, wrap-up and bring down improved by 209% if you are keeping score at home courtesy of our brand spanking new metric (PRAISE be to Conan on TSL).

As you can clearly see, tacking got downright sloppy @Ohio State, and only waned a bit in the final 15 minutes of play hosting E.cu. Notice as well, that no matter how tight or how sloppy tacking may be, (thus far) it generally tends to tighten up a bit on a Quarter by Quarter basis; as Foster subtly adjusts his on-field deployment geometry to move the spill-defender closer to the intended point of likely first-contact. That’s game-day strategic coaching taken to the nth Euclidean degree. (if you will pardon the pun)