Today’s word of the day is… shrift

Well, actually they tackled like (bleep) and man-o(n)-man, did the Boundary-Cb get dogged all the way out or what? Sure looked to me like someone(s) at East Carolina did their Ohio State film-study homework after all.

So come sit under the learning-tree… I assure you, there is plenty of room and I need all the help  -after watching this film- that I can get; and we shall confess Virginia Tech’s sins together.

3Q 3:53 remaining:
I gotta admit, this reallllllllllly blisters my ass! Let’s see, the tale of the tape reads thus:

Ahhhhhhhhnhhhhhh, ok, whose gonna win this battle when Ken gets both hands and arms on this scalawag substitute Pivot?

Big bad Ken and his 36o bench press, right? ‘rong! As this was a soft, softer, softest tackling effort. It really was a clipboard breaking or film projector smashing moment men. Ken, I’m sorry to have to say it, though you son got pipped by a little squirt of a back-up Qb. This one was not about technique, as the Summers kid from E.c.u. simply wanted it more; as in much more! Dang yo’, just dang.  (segueing___)

Yah; I mean, pretty damn much.

As since half past when did we become such a handsy team as tacking goes? Looks like we are trying to get to third-base all day long after the senior prom in breaking tape. That prolly won’t cut it on a dry day, and that certainly won’t cut it when things get wet. Though how did it come to this? (so to speak)

And does this remind you of anything else? Or should I type of anything past? As it sure reminds me of ~2011 or approximately when someone wrote Will and F4EHokie to tell them that Virginia Tech was ripe for a fall. 24 up and 19 down later and you see what I mean.

Though do understand this, Magic Johnson may be retired, yet he’s still here; and he’s still right, try as you might, “…you can’t have fun without the fundamentals.” And -of ALL THE THINGS- it is the defensive, and I’ma gonna repeat that one sports-fans: it is the defensive fundamentals that are wanting. The offense may not be textbook perfected, at least not yet, though you have to give the offensive coaches a 4 round lead on the O&M coaching scorecard that currently reads: 40-36 on boxing’s 10 point must system after the first 2015 four rounds. When was the last time you scored a pressbox fight in the Virginia Tech’s offense’s favor so blatantly ahead of the Virginia Tech defense? Since half past Don Strock? Or me neither? Take thy pick…

Now all that harangue being brandished, and without getting too defensive, here is what I’ma really seeing on stop-unit film… 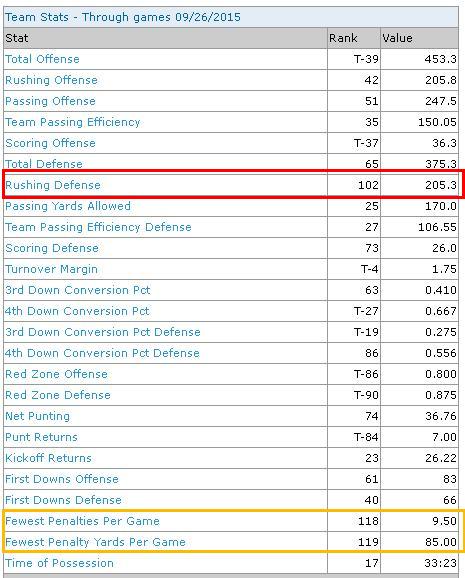 And here is what I’m not seeing on tape, brief and direct… textbook tackling, textbook leverage downfield in coverage (in particular on hip-turns) and a generic lack of Qb hurries, pressures and sacks. As the East Carolina film-room graduate coaching assistants musta forfeited their minds trying to keep track of Pirate Y.A.C. (yards after contact) and the coverage/leverage or lack thereof, and likewise lack of Time To Throw metrics are a self-fulfilling chicken vs. the egg kinda argument. As each one is begetting the other and each one is only making the other, worse. We do not hit and wrap up, as this is a very hands first tacking stop-unit on film. “Grab, grab, grab” and we are either getting beat long with precious little Qb pressure, or we are flunking pass-protect geometry on 1 or 2 second throws and suddenly it is backyard 2-hand touch-football tacking gone “deja vu all over again.”

Make no mistake here gents, this is Bud’s 2nd or 3rd worst defense after 4-games, ever; and Bud has more work to do on his hands than he has had in well over a decade.

And guess what –during the month of October? We face two of the top-3 defenses, or four of the Top-17; in the Nation!

Think about that one gents; you do the maths.

4Q 8:55 remaining:
Why did Cam Phillips cut uphill or vector himself to his left and therefore have to run up the slope of the midfield crown on this one?

MEMO to Cam: always run to the pylon as your cut will give you a brief edge even if you are in a speed disadvantage, as only you know where you are going. Always go downhill, you just might have scored down slope.

4Q, 4th-n-2 to go, 1:52 remaining:
“God’s Gift”. When you young man are that brazen to actually pay someone to ink that up on the back of your triceps? You young man really do need to be brazen enough to make this clutch-catch. Maybe if it had hit you in the triceps you would have caught it, instead it hit you in a bad place, it hit you in your hands.

That said, this was a Major League throw from b.Motley with the post-season for seam-heads just around the corner. I did take note of this, and you should too, Motley put the pressure-packed throw right no the money. only God’s gift short-changed him.

2-2 overall at 4Q 0:oo or 8 games remaining:
Do you see my point now, men? Just way way way way too many cutsie little things going on out there from this football club right now. Not huge huge things, just little stupid things.

We just gotta wear a “MY TIME” watch on national TV vs. Ohio State. We’ve apparently forgotten how to form-tackle, OK.Drill or politically incorrect Bull-in-the-Ring Drill be damned. Or in other words there is just too much facebook look at me social media on this football squad right now; and just not enough Mallack or Teller’ites. Not enough (Sam) Roger(t)’s thesaurus or synonym flavored tough ballers, hitters, stickers, meanies. Where are our v.Hall lead-pipe hitters? Where are our J.C. Price  defensive leadership sledgehammers?

Or in other words again -and God I hate to have to ask this, again… however; have we gotten soft all over again? Or is this what happens when you (now) only practice 3.5 days per week?

Q. “What would be your solution??? (to Frank and the football program’s slide)

You are a man in the know so to speak. We all know the program has slipped. Do you think Frank can turn it around? Curious what you think….”

That is such a damn good/hard question, I elected to do a C&P from TSL.com’s Subscriber Message board to here. So here goes…

A. I’ll take the 2nd question 1st: can Frank turn it around? I doubt it.

There, I said it. Though how does that automatically make the next hire; better?
(as methinks peeps is missing this in their uber change-agent rush to Beamer-o-cution judgement)

Because it is my macro point-of-view…………that one does not exist.

Accordingly, I know plenty of A+++ coaches who view Frank as the luckiest coach; ever.

I  see NO NO NO way in the world anyone can (now) even remotely compete with Frank’s sense of timing. I just don’t.

I just do not see how to better or substantially improve any of that now that the Tidewater is filled with out of state recruiting poachers. And Whit’s liberal spending penchant is not gonna make any purchase on that once in a lifetime O&M perfect storm sense of timing.

That may not be what yah’ll fine TSL pay gentlemen wanna read; though you tell me –how it is incorrect?

“Where you stand is where you sit.”
-Miles’s Law-

And as things stand now? I would not advise standing up until this Hokie ride has come to a complete stop.

As someone opined during Intermission @Purdue, this is one helluva a tough team to peg. As every single game left on the 2015 docket is clearly up for grabs.

And that very same someone owes all of you some accountability for such a piss poor prediction last week.

Prolly my 2nd or 3rd worst one ever.
I apologize.

As this Hokie football roller-coaster ride is far from over. Hold onto your butts, and take some O&M Dramamine. Hell, (sic) might wanna O.D. on it.

As I admit it, I’m just not sure how shrĭfty this season is gonna get?