Despite the ever growing (or tightening) O&M whisper, vibe, hint, and sourcing omertà, here are several things that have indeed, caught my Eye thus far this 2015 training camp. 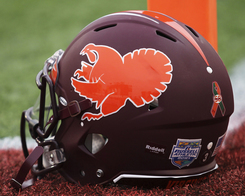 As I see several individual baller things’ that I do want to hit upon before we get to Labor Day night.

And I likewise do see a couple of things I’d like to see cleaned up.

So let us R.A.T.T. hop right to it. As unanimous Associated Press #1 in the galaxy “the” Ohio State is only really a fortnight away.

And remember, this is the website is where real O&M men,
congregate, and speak TRUTH to the power!

Ryan Mallack #88, Te:
I’m very impressed with this guy right about now. So impressed, in point of fact, I just gotta ask:

…is Ryan Mallack the Wyatt Teller of coach Stiney’s Te corps? Or is Wyatt Teller really and actually the Ryan Mallack of coach Stacy’s front-5? Take a look at the gun-show here men. This is a very strapping good looking edge or seal blocker right at the point of attack. I dare say the best since the days of the textbook 1-man blocking clinic extraordinaire, or one Jeff King. Jeff might have a little fundamental edge, maybe even the slighty softer-hands -though Ryan has enough Gift of grab- and yet there are very very few Hokie Te’s historically who can match Ryan Mallack in terms of lb. for lb. raw, pure, strength. This could very well be the best blocking Te in the whole darn A.c.c., and this is the best blocking Te at Virgina Tech in at least a handful of campaigns, maybe more? (p.s. PEACE-out to any of you little Cb’s in coverage if this Te man-child finds you and pwns you downfield!!!)

I posted a pic on the techsideline.com pay message board of Tuaman and all the rest of the 2015 Linebacking cadre. The thing you see first-most? Tua is just like what Dean Martin said of Sammy Davis Jr., Tua is “s, m, all.” Small, as in short of stature. As five-four looks to me like he is about 5’10” in person. This however, should naturally -if not altruistically- decrease his pad-level. And thereby afford him a vertically challenged greater sense of catalyst leverage. If only the body was willing, right?

Well the body sure looks more willing in the northern hemisphere this year compared to last; at least to me. As Tua has widened his shoulders (Delts), and inflated his chest (pecs), and upper-arms (bi’s and tri’s) et al. The Tuaman may never be a prototypical sized Middle-Lb. C’est la Michel. However, he does look more physically willing at the point of attack; even if he may have given back just a tad of east-west or lateral pursuit speed. This however should still be a net gain, if we can only keep him in the correct Gap (seems to over or undershoot his or the play Gap, at times) and if we can dial up his temperament, just a bit; and get him to attack a bit more north-south. If so, we may just have a highest possible C+++ or a downright solid Mike-Lb on our hands by the time October ends. Which is a long long way from being a getting owned in practice F+++ quality MLb.

Re-habing with mars’ Williams & Shai McKenzie:
The early vibe here is that Shai is ahead of Mars’ despite the fact that Shai prolly had the worse pure level of knee-damage.

Shai kinda reminds me of Gayle Sayers, the year he came back and willed himself to morph himself into more of a pure grinder between the tackles Tb, as opposed to open-field whirlwind wizardly world beater. As I’d have to expect that Shai is prolly 2016 away from recovering full speed and total explosion, coach God willing, if he ever does. Mars’ on the other hand is just downright bulky looking. As opposed to being gutty looking as someone distinctly pointed out last training camp ’14. It could be the second half of the season before Mars’ re-conditions and slowly practices his way back into playing shape. Though he sure seems to fit coach Stacy’s pet blocking mantra of hammerhead north-south hard charging bull of the woods ground assault. If anything Mars’ looks stronger and yes, bigger than ever. I don’t now how many plays that translates into, though I do know this is a downhill punishing guy, with a weather forecast of 3-5 yards and the proverbial could of dust, just looking for a October/November place to happen.

all-world recruit, #2, Dwayne Lawson:
Yah; he’s blessed. As I’ve had several tell me that this is the best T&F guy playing football when he could be doing real live damage to the A.c.c. Track & Field meet near you next spring. 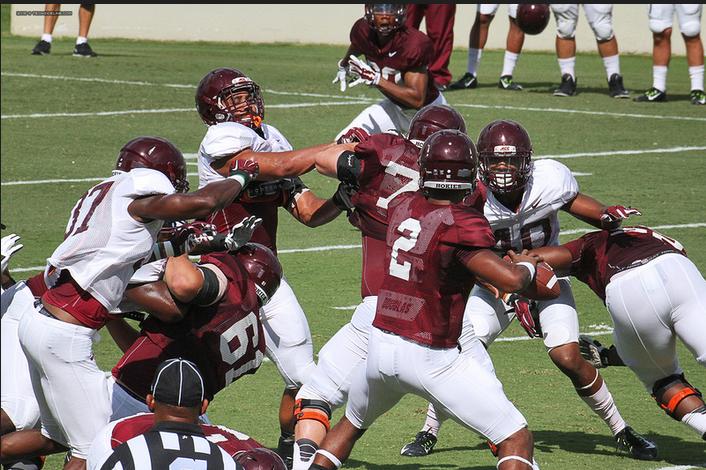 Couple of things here need to be put in order, for a kid who some have called: “…the best pure Qb talent on the VT campus since Michael Vick”!

So there are a few little to medium things to clean up here folks, and just how much of the play-book can you cram in to few months removed from his Sr.Prom head? And quite frankly? I thought Lawson took about 1/2 a step backwards on Saturday –he pressed too much. When he needs to relax, let the game come to his metrics, not attempt to inflict things; the other way around. He can indeed make some big plays for us in 2015, if needed. He will make a few raw or under-cooked in 2016 terms mistakes. Don’t lower you career ceiling here gents, just simmer down a bit on what you expect in fifteen terms. As (eventually) you will love what this kid is cooking; as coach Loeffer could not fawn over him any more if his name was: “Bambi”.

Or damn well JUST what you’d want in a blind-side possible three or four year very high ceiling Ot to be in terms of signature positional measureless. Wladimir Klitschko sports an absurd 82” wingspan (arms extended horizontally at shoulder level, standing like the letter T). Yosuah‘s is bigger than that! Yah; I’m excited, and yah; despite a few mentally swamping nugget or rookie year mistakes, the metrics here are fabulous indeed. Virginia Tech hit the lucky as can be converted recruiting jackpot straight across with three cherries, once again. The footwork and nimbility is naturally there, ditto the long ass arms than can reach you before you can reach them, and this kid seems to have that instinctive pass-blocking knack. Would like to see Yosuah stay a little lower for a little longer at the point of attack in run-blocking. Though that will come with time and enough chute-drill hit your head on the top of the cage reps. Once that happens? I’d be surprised if you did not field an all-conference baller here by the time he is a senior, possibly before. Maybe even one with a small to medium Sunday shot.  A  further developed wingspan, raining Ot familiarity, and 350 lb. bench press, a 550 lb. back squat and a 36” vertical leap all conspire to say so!

Can you say: Super Iron Hokie in the weight room with a 355 lb. bench and a 335 lb. front squat… from a typically fondue eating Kicker?!? Well try saying it to this 6’2” 214 pounder’s face, as he looks like a Fs more so than a K, then try getting outta this Kicker’s way. As Joey can kick the ball from here to Tennessee, only thing is it still sometimes lands in Kentucky. Though this bionic of a leg does give Frank a bona fide scoring threat out to 55 yards. Maybe even close to 60, if wind aided. Which is odd for a guy who hovers right at high 50’s as kickoff averages go. That being said, if Joey can get off to a hot streak start to begin 2015, at say 85-90%, his confidence will only grow and his leg is big enough. As in, very; just needs some targeting work, and this guy is all-conference and N.F.L. combine, ready, as in, very!

(back-up) Holder gone possible rotational Top-4 Wr, Cee Jay Carroll, #86:
Ahhhhhhhhhhhh, yah, sure, he must have good hands, even though you prefer a back-up Qb as your P.A.T. and F.G.A. holder.

Though what if he has the best hands on the team? What if he has the smallest and the best hands on the team at a positively The Shire of Lord of the Rings fame looking 5’6” and 159 lbs.?!? Who am I writing for again? Virginia Tech or Blacksburg High? As the 24060 zip code seems correct enough; though the other sporting metrics seem all outta whack. Talk about sitting down on a route, or finding a seam, or getting underneath the coverage… yah; C.J. can do all of that and he can do all of that in spades. He can catch pretty dang well, too and he appears to have an instinctive gift for finding and exploiting any soft spot(s) in a given defending zone (coverage). He of the 4.69 40-time and of the somewhat surprising 370 lb. front-squat; or a staggering 232% more than Mister Carroll weighs!

Is that enough to contribute regularly in D-1 power-conference terms? Is that even enough to last the day …much less survive the year? I, don’t, know? I do know however that #86 is making number’s 80 (d.Knowles) and 81 (k.Asante) look pretty bad. Very bad on a lb. for lb. Floyd “money” Mayweather basis. As #86 is pure cash, just so long as his smaller frame debit card don’t snap.

Mister Deon Clarke, #40, ‘backer:
Anyone else noticing a change in demeanor here?

As Deon seems to be neon as temperament goes this August Camp. The good news is he does not (yet) have an incoming reputation for any of this nonsense.  The bad news is he just might, before 2015 ends, if this post-play dust-up routine keeps up. Frank has taken a shot at Clarke, last weekend Bud Foster did the same. I’m not sure here my ownself? Senioritis happens, typically that can be cured by enough bonus grass-drills or some extracurricular running, after everyone else has long gone home. Though this behavior pattern is trending in the direction of a concern, all the more so when we face a stickler set of by the (rule) book zebras, or late in a given close game, in the heat of battle.