Virginia Tech men’s basketball returns to the court down in Tally, FLA on a Saturday afternoon matinee.

The Hokies just got buzzer-gutted when the Hurricanes swamped them with a Cat-V last-second shot upon which the ‘bank’ was open indeed, in spades in actuality. With no word yet on hommie calling: “glass” or not? Less was c.Moore on a k.Kong-sized gut-punch; below the O&M beltline. Now the truly snakebit Gobblers must sojourn 641-miles So-by-So-West to take on fellow sunshine stater Florida State itself. The Seminoles enter this one at a respectable 13 up against 6 down on the season. Good for 4th place in the All Championship Conference at 6-3 in interleague play. And likely making post-season reservations as we type. Nonetheless, what you wanna know is… who is gonna win and by how much, rights? So, read on, to finds… out!

As to me… this is an underrated all-’round roundball coach here, men.
Prolly fair to say F.s.u.’s very own hooping f.Beamer.

Daddy Leo’ is married to Claudette Hamilton. Claudette is a volunteer tutor, and they have two children: Lenny, 26, a musician; and daughter Allison, 11.

Towering Tanor Ngom, true-C, is back after a denting earlier this campaign. Also back would be his senior season… 7′2″, 237 lbs., by way of: Dakar, Senegal, then by way of: Ryerson University (Canada). As this kid is indeed an emerald in the N.A.F.T.A. tall-grass, ‘eh‘. And this seemingly part-time starting caliber guy is just getting back in the lineup… as are his truncated: 4.3 ppg on 2.0 rpg and 1 bpg. This on an astonishing 83% overall, however!  As you now clearly know where this kid lives and goes to work relative to the rack itself. Career near 80% FT-shooter, so there could be a raw or uncooked skill-set to marinate here. Does have a legit 15′ feathery J or mid-range itself. Quick lateral guy who covers/anchors a lotta ground, and frankly it looked like he could still add at least a 10-lb. plate or two to his floor game to me. Holds several Canadian shot-blocking collegiate records and program rebounding records and nearly went 2o19 pro’ for it. Does have a history of hand injuries (St.Jullia bless), which have retarded his O development a bit. Only began basketballing at age 15, in Germany; did I mention the rawness, yet? As who knows what this kid is on a full hoopology life-cycle at Center? As Tanor may just be a fringe overseas pro’ for his D and rebounding as is.

Additionally, F.s.u. brings: “The Big Duke”, 7′5″, 235 lb Naheem Yamma McLeod C and 7′, 244 lb., Quincy Ballard C attcha off the pine. McLeod (see: pic) is a Philly inner-city baller from: Chipola College prior to F.s.u. Ballard is a Syracuse, N.Y. escapee. Both look the physically developed part with man’s-game ‘son’, to me. Combined they net you: 6 ppg with 5 rpg and 2 bpg. On 62% and 66% shooting respectively. Lindy’s said that McLeod is something of a point-C or Sabonis passing/table-setting big-man. McLeod also led Chipola to the NJCAA Tournament in Hutchinson, Kansas in 2o21. And was 247’s 24th ranked Pivot or Center prior to that. His mom is 5-5 and his dad is 7-5 his little sis goes 6-8! WOW. With Ballard being more of a sh0t-altering defensive ace; who honestly may have been something of a big-man ‘reach’ (pardon the pun) as he was not VHT (very highly touted) outta high school. This does not even include likewise 6′13″, tho’ lean, leaner, leanest 19o lb., Four or P/F, true-Fr., John Butter: who caddies for 5.4 ppg with 2.6 rpg and plays more so for his kinetics, springiness, and surprising 43% from 3-point-land. As this is one big, bigger, biggest Gigantopithecus team folks.

r-Sr., RayQuan Evans is an off-G, who checks-in at: 6′4″, 2oo lbs., as a North Idaho College transfer baller. 7.1 ppg with 2.0 rpg on 2.9 apg and 1.7 spg is not the worst composite work from the pine if you can get it. Evans is said to be a ‘glue-type guy’ who did start 18 times last season. Has his degree and surprisingly made the All-A.c.c. Tourney team, so he is clearly not spotlight shy. Rare Indian or Native American hoopsters as well. Came up down the street from where Gen.Custard was killed (no bleep). Has an associate degree from: Nor.Idaho as well. Makes clutch FT-attempts or game-winners on the reg’. Did cut down the nets and garner a championship bling for helping North Idaho to the 2o19 NWAC Championship. That counts. Good locker-room kid with plenty of experience coming to your local Y to school you for years to come. 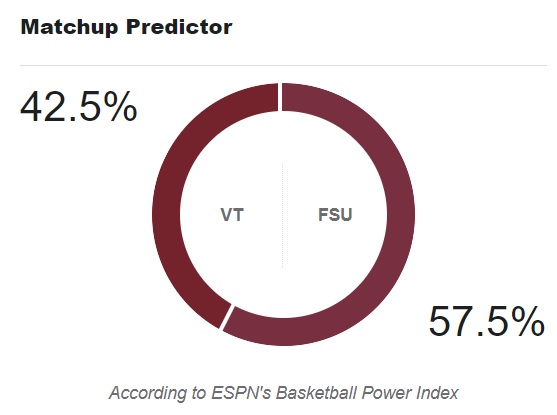 …is that you (now) gotta serially wonder if anyone is gonna wanna take our Spring Break business?

Or, if menz hoops is teetering right on the brink of being proven to be ’22 Spring… Broke?

I mean, we are a .5oo hoops program right now who is a lowly looking .222 in inter-league play.

Yes, and thanks to Commonwealth Commissioner/Commissar Mark R. Warner, we are in the P5 and signature shiny A.c.c. Tho’ just how often does the Atlantic Coast Chump or doormat team get any post-season love?

As it seriously is getting close to now or never for Mike Young and Co.

What with two whole entire W’s since the week b4 December 25th!

Our handy-dandy friend the so-called Forum Guide of Graham Houston fame is calling for a mere 22-point VomitT down @Tally. The caveat being… as Recency Effect or horns/Halos goes and it is only calling for getting beat by a couple of shots. It was really skewed in F.s.u.’s favor earlier on in A.c.c. scrums. Tho’ pro-rata and this (still) works out to a much more manageable looking 2.5-point Seminal moment.

The annualized year-to-date vitals say that… VeeTee is up just north of +2% in shooting percentage margin (nearly equally O & D split); with V.P.I. up +11% in 3-point percentage margin (just a little mo’ per D than O), and F.s.u. is up +2 Windex Wipes in rebounding margin year-to-date. (Tough to fight all that length on the o-Glass).

The most recent 5-game metrics say that… the Hokies are now up +3% in shooting percentage margin (all on very decent shooting of late); the Gobblers are now up +6% in 3-point percentage margin (all D less one-percent on O), and yet the Seminoles are now up a useful looking +6 in rebounding margin as caroms go off the fiberglass. (Nearly all of which is F.s.u. plum gettin’ after recent misses; with Vah.Tech nearly breaking even). 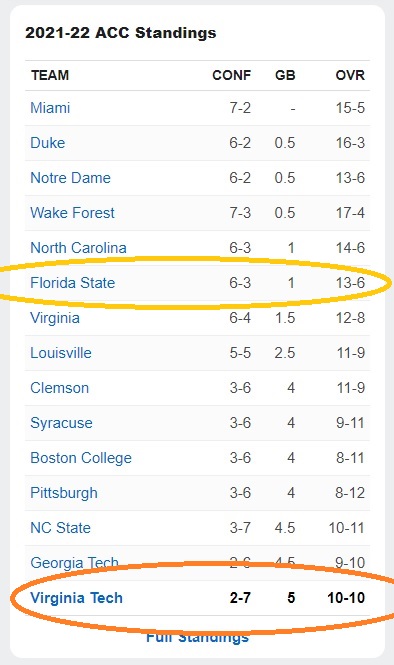 WHAT ROAMING CHARGES?
Virginia Tech is the top team in the A.c.c shooting 39.4% from downtown!

HOME IS WHERE THE HEART IS!
Florida State has not been beaten @home in a whopping 56-days and counting!

SAY: “AHHHHHHHHHHHHH!”
Coach Hamilton said there has been an outbreak of tonsilitis on the team! Yikes!!! St.Blàise bless-bless-bless!

Leading scorer Caleb Mills suffered through it on Wednesday night and barely played in the second half, and now sourcing says that multiple Seminoles have come down with it.

Well, Eye sure was gonna call for a tomahawk chop to the po’ Hokiebird’s neck here…
…then I ran the maths and not my mouf, see?

And dangnation if we/VeeTee are not catching a wobbly. insalubrious and partially lame-O (Godspeed) F.S.U. hoops team at just the right exact time.

That sickbay science fact plus the objective F.s.u.’s lack of 3-point D is our one lifeline here. Besides that, we is prolly pretty well D.O.A. vs. the Seminoles at full war chant strength.
Granted. Mea Culpa. Fair-n-square, rights?

This one however has that oddball roundball rhomboid look-n-feel to it…
…and shooters do shoot. (Hint: F.s.u. is allowing over 41% on 3’s of late…)

Or in other words… our shooters have gotta be due to put in work at some point in time… and pinching this one with three consecutive or threepeating lowercase A.c.c. teams on tap after that?

I’ma not terribly sure how… tho’ I’ma gonna go for the upsetting gusto here.

The good-guys teepee on F.s.u. and (somehow), nick this one late.