The Hokies now face 10 up and 12 down or a negative All Coaching Conference team overall. With these Jackets coat-checking at a short-shirted looking .363 (4-7) in interleague play. Right at the end of what -at least on O&M paper- did appear -past tense- to be a three outta four potential VicTorious run for our beloved Fighting Gobblers. However, the Hurrying Hokies now must hustle to avoid going an ugly looking or Duck Pond belly-up o outta 4. As right now we are 410 miles removed from slump-busting or getting slumpier. Nonetheless, what you wanna know is who is gonna win and by how much; right? So read on, to find… out!

Seven of Pastner’s former assistant coaches have (already) gone on to their own careers as head coaches. A broad branching coaching-tree, already!

Georgia Tech at a glance:

Parttime starting, Texas-transfer and 6′10″, 250 lb., final year lowercase true-C James Banks III is a long, big, sizey downright springy looking substitute off the G.Tech pine-squad who prolly starts -and possibly stars- at most smaller mid-major schools. As recall, this kid was a pretty big national deal with the 49th ranked Scout.com tag and a gold medal at the 2016 FIBA Americas U18 Championships already in tow. Right now, Banks III finds his way to a useful 10.1 ppg and a team-leading 7.7 rpg and a team pacing 2.8 bpg all on 52.9%. He will go hard and 2-hand rack you on dunks and yet he sure does not look 250 lbs. to me. Bikini-season 25/8, or 367 (leaping this year); as Jay.Bee looks like he could easily hang another 10-15 lbs. of protein shakes, steaks, and right-mass. That being said… his positively enveloping 7-5 inch wingspan is predatorial indeed. Not to mention the fact that that same elongated wingspan allows him to jump-touch a phenomenal and nearly unheard of 12′6″ on the top of the backboard! As the N.b.a. testing matrix we all call the Draft Combine is gonna love this kid here. Good on James, he could very well rake some overseas frontcourt coin(s) just on measurables alone.

Bubba Parham is a gliding looking 5′10″, 16o lb., r-Jr. season rarefied Lexington, Va. or V.M.I. transfer back-up One. Where Parham -you may recall- made the All-Southern Conference team as a sophomore and was named SoCon Freshman of the Year the year before that. As this bowling-star in the making (off-court) is a 3-point taking fiend from downtown. As this Bubba’s range is basically the gym; if he’s in it? He’s open and his 39.1% deep great for 21.1 ppg last time as a Keydet tells you just how explosive this mighty-mite can be out on the perimeter when Parham gets it going when dialing long-distance. As of now, he nets you 5.7 ppg, with 2.6 rpg, 1.8 apg and he gets you 1.0 swipes in relief with the team lead at the charity-stripe at 89% if you need him. As this former now homecoming septa-A (AAAAAAA) Georgia H.S. Bubba is instant O, just add P.T.

6′10″, 226 lb., third-year Evan Cole is a very versatile and therefore a very productive player on a per-minute basis. The book here says that this is something of a Baltic Avenue man’s Point-F or a multifaceted or Swiss Army pocket-knife type of frontcourt player with a varied tradecraft who saw significant action late in the A.c.c. season as a freshman. Although he missed significant playing-time as a sophomore due to a left ankle injury and the flu (St.Philip bless). On tape, Evan is nearly a shockingly mo’ athletic Four/Five combo’ baller who slashes, runs the floor well, crashes the glass and he will wind-up Quixotic windmill dunk on your ass! Seriously, this kid would be an insomniac of a sleeper pick for any A.c.c. Dunk Contest. At the moment, in just 11 mpg, e.Cole nets you 4.8 ppg with 3.6 rpg all on 47% overall. Although his bricky 47.5% on FT’s is the only gnostic or Masonic looking nag here. Ne(a)t kid… something of a hooping diamond in the Augusta rough from nearby South Forsyth H.S. if you will. 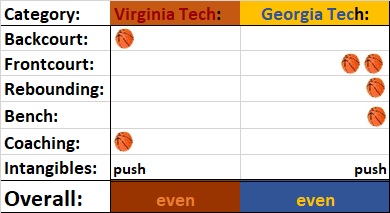 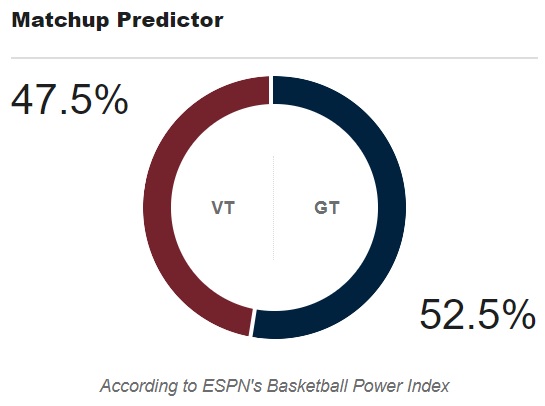 The takeaway here is… that although we/Virginia Tech may not quite be speed-dialing the undertaker, we do have several 24060 funeral-homes on, hold.

As the Fighting Gobblers need a VicTory here like a dead-man needs a coffin.

What with, what seemingly should be several winning looking games dotting this fortnight portion of our closing 2020 A.D. men’s basketball schedule. Because right now would be a perfectly acceptable time to start outcoming like we are the credible and R.A.T.T. favorite or better roundball squad in these attractive match-ups.

Our handy-dandy friend the so-called Forum Guide of Graham Houston fame -same as we have recently seen- is calling for a 22-point G.Tech Tech Triumph. Although on a pro rat basis this appears as a vastly more manageable looking 3.67 Wrambling Wreck W. (the caveat being… this one swung and it swung disparately and wildly… wildly favoring V.Tech early on and wildly favoring G.Tech later on in seasonal round-robin common opponent terms).

The annualized year-to-date vitals say that… G.Tech is actually up +2% in shooting percentage margin (1% each on O & D); with V.Tech however up a useful +7% in 3-point percentage margin (nearly all on O); and yet with G.Tech up +4 boards in rebounding margin in annual terms.

The most recent 5-game metrics say that… G.Tech is now up +8% in shooting percentage margin (equally split 4% better on O & on D alike); with these two nearly sister-kissing or tied in 3-point percentage margin (per the Hokies being +4% better on O and the Jackets being 4% starchier in defense of the 3), and finally with the Jackets suiting-up to a growing +10 caroms edge in rebounding margin in the last fortnight of Windex work.

VeeTee is up +3% at the charity stripe for the year.
Irregularly enough, both teams are dead even on R&R in the last fortnight of play.
Gah.Tech is a .454 as a homesteading host; whereas Vah.Tech is .5oo as a guest in your house.

Well, someone has to win this one… right?

Albeit one that will pretty well fall a bit short of hardwood artistry or easy on the eyes because if fluid hoops and scoring is your thang? You might wanna go Pt.Guard and just pass on this one here.

That attempt at homogenous sporting satire aside… I regret to have to inform you that a good, solid, well-grounded in reality, OPT peg proved more parts elusive than parts effusive here for me. G.Tech seems better @home although the availability of Josè canceled all of that out.

Nevertheless, we do potentially see two ships passing in the proverbial night… albeit a Conference trawler and a harbor-tug.

Because Eye did see that G.Tech was recently beaten 3-straight times (same as V.Tech); although G.Tech was not beaten by more than 2-shots which includes three straight underdog games; two of which were testy contests vs. teams nationally ranked 32nd and 6th overall.

On the other side of this Technical equation… the good Tech, or our Tech, was favored to win in two outta their last o for three scrums. Do you see what I mean?

I do not mean that either team is all that and a “snap”.
With scoring itself about to get Bud Foistered scoreboard wise.
Because this one could dang well be a race to 60— the first team there? Wins.

(and by that I mean it could just as easily be a Smokey and the Bandit type of basketball game; or a race to double-nickles).

Eye do however mean that one team is showing just a couple more signs than the other team.

And honestly?
In the vacuum of any superior evidence?

I’ma just gonna side with the more experienced A.c.c. team,
running-ball in their A.c.c., house.