The Hokies must visit the other Atlantic Coast Tech and therefore suffice it to say that no matter how butter V.Tech may be, I for one am happy this one is not being played on the… parquet. That marginalized attempt at satire aside… our beloved Gobblers visit Gah.Tech down in the ATL. A 327-mile roadie or our first visiting announced pop-quiz of this A.c.c.edu.hoops spring semester. As the Jackets check in at 9 up and 5 down and they are technically tied for 1st-place in the A.c.c. right now (1-o). They have beaten who they are supposed to beat, and yet they have been stung by nearly everyone with any real live name-recognition cachet. Nevertheless, as you will read below, this one is about to get defensive indeed… although you wanna know who will ultimately offend who in the end? Read on, to find… out!

Baller Josh Pastner was a walk-on freshman on the 1997 N.C.A.A. Championship University of Arizona basketball team. After winning the NC2A title, Pastner was able to finish his degree in only two and a half years, taking as many as 33 credit hours per semester. He earned his bachelor’s degree in Family Studies from Arizona in December 1998. He finished his master’s in Teaching and Teacher Education in December 1999 before beginning work on his doctorate and starting his coaching career in 2000 as a graduate-assistant under Lute Olson at Arizona and later at the University of Memphis under John Calipari.

On April 6, 2009, Josh Pastner was selected to replace John Calipari as head coach at the University of Memphis. At Memphis Coach Josh Pastner only won five conference titles in his seven years as the big whistle; including one C-U.S.A. Coach of the Year award in 2o13. Josh made the March Madness big dance at Memphis his first five seasons; then declined lesser post-season invites in his final two shotgun to Coach-Fu tenured years. Josh is known to be one of the best young hotshot recruiters in the land, including inking the #1 recruiting class nationally for Memphis in 2010. To put it mildly, Josh Pastner is a basketball coach and nothing other than a basketball coach. Coach Josh Pastner also courts a rep’ for lack of post-season success with a lot of one-n-done high roster turnover early entry type talents.

Still yet, may St.Joshua & St.Paul bless and sing: “kum-ba-ya”

Six of Pastner’s former assistant coaches have (already) gone on to their own careers as head coaches.

Daddy Josh’ is (still) married to Kerri Lamas; they have three daughter’s: Payten, Sydney, Pastner, and one stepson (Ethan); Lord have mercy.

Abdoulaye Gueye and Curtis Heyward II at least give you some spot minutes here and there off the Jacket pine. Abdoulaye Gueye by way of Dakar Senegal fame is a 6′9″, 217 lb., r-Sr., 7′ 3” wingspan frontcourt rebounder and defender who is pretty under-cooked everywhere else. 4.8 ppg with 3.6 boards and 1.1 blocks, a steal and an assist on 50% from the floor and now 65% (up from a horrific 25%) on FTA’s says, so; although the book here reads that Gueye is developing and that he is a natural leaper who runs the court well enough. As a 660% improvement in scoring off of a broken wrist (St.Julia bless) makes you wonder what this kid can do with full health/matriculation? Because nobody is wondering about this worker-bee’s heart, that just drones on and on.

Curtis Heyward II s a 6′5″, 202 lb. second-season Wing who looks like he’s at least 30, maybe 33-35 years young. Greg Oden syndrome 1o1 if you will… nevertheless, this Heyward (22 years) has a 6-11 wingspan and a very rough-n-tumble attitude. Bet the under on guys who pick on this Heyward. As this Heyward has a tag for driving hard, a high hoops I.Q. and his bio’ says he: “specializes in: hard-work.” So there you go, a high octane, calorie burner extraordinaire. As every team needs a lead-pipe sparky welder kinda kid such as this. Curt and his blossoming game get you 7.8 ppg, on 2.2 rpg and 1.1 pockets-picked. Mix in 35% deep and 79% on his FTA’s and you have a glue guy who will, will his way to low teens in scoring come 2021. As Curt knows how to win, an Oklahoma state title than a full-fledged scholastic national title upon transfer to the NJ. hoops factory of Brewster Academy both says so. (Apparently no relation to R.I.P. Craig “Ironhead’s” kid who just graduated last year that I could find) 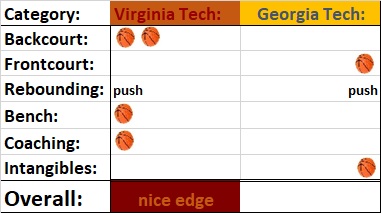 the takeaway:
The takeaway here is… this one is no one’s gimmie or lay-up, a cherry-picking, or breakaway clearpath to the basket game. 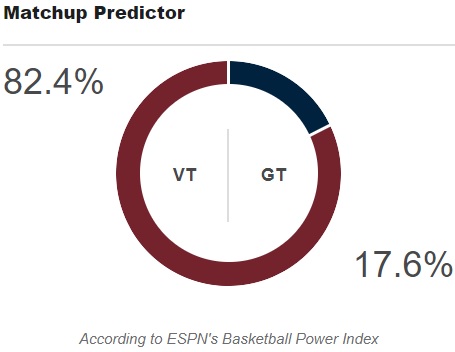 The other Tech means to do us, hard. In particular on the halt-unit end. Fortunately for us, points are at a premium for the other Technotronic Atlantic Coast hoops squad this season. As the Jackets can defend, although (offensive) output is just not their long suit at the moment.

Our handy-dandy friend the so-called Forum Guide of Graham Houston fame should be getting loose over in the statistical bullpen as I type. Next week or two give/take…

Nevertheless, the seasonal trends say that… the Hokies are +5% in shooting overall and +10% from 3-point land with a surprising +3 edge in rebounding margin.

In the most recent five-game set… the Gobblers are +4% in shooting from the floor and +10% again from behind the arc with a now +4 advantage in rebounding margin.

V.Tech is actually +1 on rest, though has to travel and that makes this one an R&R awash for it.

Overall FT-shooting has been virtually deadlocked all-year-long. Although G.Tech is .8oo so far as a not well-receiving 8-2 at home, host.

Well, I’ma gar-ron-damn-teeing that Tech wins this game or I b.street will eat these very, words.

(and lest we forget Lt.Col. “wild” Bill Kilgore and me of Appoclpase Now fame like our crow: “rare yet, warm“). That Ventnor Avenue man’s attempt at satire aside… it would appear to me that the good Tech is just too good on offense for the other Tech. Although, lest we forget Will Stewart’s visiting A.c.c. metric whereby the traveling Atlantic Coast Club wins about 30% of the time historically.

…and either way, we are all about to find out if Buzz’s very own Buzz Foster (defensive-coordinator/coach Jamie McNeilly) is fo’ real in this one, or; not?

If you ask me -and you did via reading these very words- if you ask me this one wants to act-out as if it has the applied sports psych term of: “trap-game” written all over it.

As in years past several pretty good Vah.Tech hoopsters found themselves in a pickle of an away contest when terms were contested vs. hosting teams such as these (Jackets).

On the road vs. teams with the defensive and/or Post abilities(s) to muddle a game up and win via a version of just enough homesteading offense or what can be called… ugly-duckling basketball.

Though as Jerry West taught us at the traveling basketball all-stars camp as a kid… two things define truly great teams: “great teams go on and beat the heck out of bad teams and great teams find a way to win when they don’t play their best“.

At the very least, one of Mister Clutch’s greatness identifying axioms is surely en vogue here. And it is not beyond the realm of possibility that the other West maxim could prove defining indeed.

As we/Virginia Tech are just too much -even on the A.c.c. road- for Georgia Tech and pull away comfortably enough down the stretch. Or we clap-back and eke out a dogfight type hard-fought and therefore hard-won contest on Wednesday night.

Me? I’ma actually leaning the former, although I would take the later right now
and call the whole shebang, off.