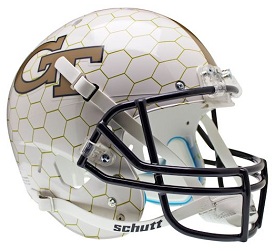 The Hokies entertain the team that Anterior Cruciate Ligaments, M.c.l’s, L.c.l’s., and menisci everywhere love to hate. As coach Wiles had better have his boys getting dat politically incorrect so-called: Monkey Drill work over and over and over some more this week. As knee roll-ups or cut-downs -be they accidental or not- will be at a premium this Thursday night down in the New River Valley. Nevertheless, this one pits 51st S&P+ hosting Virginia Tech vs. 64th S&P+ visiting Georgia Tech and that for that very reason, I am hereby gar-ron-damn-teeing that Tech will win this gridiron game! Nevertheless, that attempt at satire aside… which Tech is what you wanna know, so read on, to find… out!

Today’s word of the day is… hackle!

Paul Johnson the baller does not exist; as he is one of the very very few to big whistle a game that he never; played!

P.J. is a lot of things, among them he is a FlexBone been there, done that, doing it again tomorrow wizard of ground assault if you will. Accordingly, one could dare say he is the Gen. Rommel of college football from his U.S. Naval Academy to Georgia Southern to Georgia Tech days. And despite his throwback version of non TV or facebook savvy modern era ball; he’s done pretty well for it by-the-bye.

As Johnson’s Georgia Southern won back-to-back NCAA Division I-AA Football Championships in 1999 and 2000. Paul Johnson has the fifth most wins of any active coach in D-1 College football. P.J. is a six-time conference titlist; a three-time A.c.c. Coach of the Year and a once National Coach of the Year (2004) award winner. Coach Johnson is one of only four coaches to record 50 wins in his first four seasons as head coach at the D-1 level. Coach Johnson has also spawned three Option style disciple head-coaches, two of which -not surprisingly enough- coach at Service Academies.

Finally, industry insiders say that coach P.J. just inked possibly his best Georgia Tech recruiting class ever… so file that one 2021-22, away. (they also say there is talk down in Hotlanta of “his buyout number” right now behind the scenes)

Johnson met his wife, Susan (Propst), when both were students at Western Carolina University, and they married in 1980. They are the parents of a daughter, Kaitlyn.

Georgia Tech is 16th in Net Punting, and so is punter Pressley Harvin III. Pres’ is a lotta things and a P trapped in a Fb or Te’s body being among ’em. Standing in at 5′12″, and tipping the Toledos at a downright bulky/beefy looking 255 lbs.! As this is just a big ole boy back there at P. Pres’ was also 3rd-string all-A.c.c. as a rookie last season and he was named the freshman P of the Year by two national publications for his nugget year troubles. This after being ranked as the No. 2 punter in the Class of 2017 by Kohl’s Kicking Camps and likewise being tabbed as the No. 4 ranked punter according to ESPN and 247Sports alike. That does not suck, and neither does a kid with a big ole treetrunk sized 50+ yards on the regular. With a career long of 72 (on the fly)! Pressley also earned four letters in track and field and helped lead his high school to three-straight regional championships as a thrower and he courts a 3.8 G.P.A. out on the football field to boot. And oh yes, he’s the lead-chair as a multi-instrumental musician in two regional bands down South. Not half bad work if you can get it, as Mister Harvin III will only get better and he’s pretty much already weaponized the Punting spot as is.

The Jackets have already deployed three different 3-point shooters this season and that’s typically code for not having just one reliable gridiron 3-point specialist. t-freshman Wesley “crusher” Wells appears to have the job at and for the moment. As Wes’ is a long-legged Qb turned Kicker. He also won soccer and wrestling team letters scholastically so fondue hosting mani/pedi party jokes need not apply here. Wes’ is a member of the National Honor Society and Beta Club Honor roll student. The kicking whispers say Wells fired a record-setting long-distance leg in high school; even if that big foot is yet to load collegiately (his GT long=41).

(as for the other Jackets K’s: …Brenton King went 25% on FGA’s and Shawn Davis (blown A.c.l., St.Nikhon help!) was only 80% on P.A.T’s. That caveat being said… I would not rule any further Kicking toggles in or out here)

NOTE as well… this is a pretty inexpensive Special-Teams set on film— like they are L.D. as sportsmanship goes. They will take shots and they will fight you; literally. #9 (Vic.Alexander, again) in very particular is just a warhorse k9. Temperamentally nutty; even… “woof!”

Special Teams letter-grade: S&P+ rank=105th. And to me, that’s considerably too low for fielding a burly cannon legged punter in a game that could come down to hidden yardage when you really do NEED to win that opening-coin toss and get that +1 possession here. Return teams ain’t all that and a “snap” and yet FG-kicking is the true X-files unknown?

If W.Wells has gone Wells Fargo truck and locked that kicking job up, G.Tech has some pretty sharp special-teaming legs. If not they are only so-s0, so take thy pick…
though I’ll pick a flat–C for the moment here.

The takeaway here is… that the easy thing to say here -as everyone who has never worn a jock will be spewing this- is that Bud Lyte with so many Flex-bone rookies is not a charming match-up, is it?

The can socially fall down-n-out although have no idea how to route the same traditional media… are actually correct; for a change. As that is a pretty unsavory match-up, possibly a bad one, potentially a stillborn one.

That’s the news… the good news is… well, there is no more bad news.

The other news is… as well as coach Johnson -to his option wizardry credit- has done on maxing this B— to B+++ crew of ball-carriers out, I did not really truly madly deeply see any A+++ straight killars here. No megalodon Pat Skov at B-back, no can do it all J.Nesbitt at Qb, no 100m champion or pure burner J.Thomas at Qb1 either.

Nonetheless, this is a pretty well coached O that seems to enjoy some Gestalt Theory effects in their run-sets that do not quite stop-watch, bat and Eye, or Pro Day measurables show up upon breaking tape.

That, and who is not to say that the other Tech does not enjoy the technically more proficient stop-unit at the moment? Now mix in a P who is pretty well the equal of our own and you suddenly have a very crotchety looking home date upon your Lane Stadium hands. Ginsu dicey if you will as only one Tech can Coastal Division wub come midnight this cooling off Thursday evening. As G.Tech has played the Résumé S&P+ Rk: 49th and the Strength of Schedule Rk: 43. (which is well in advance of our O.d.u. and W&M own). This conspires to grant the Y.Jackets a 1 in 4 bowl probability. Which is to say, that of the seven teams G.Tech has played, predictably enough, G.Tech has beaten the bottom-3 and been beat by the upper-4. 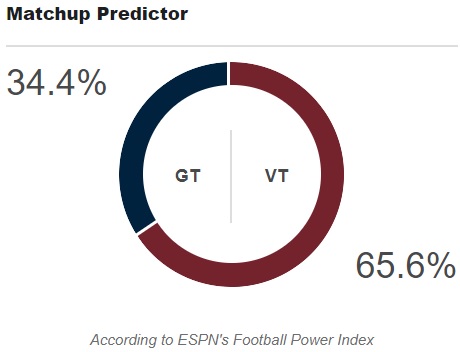 Overall, 6′ of total O separate these two on offense or basically two whole yards. Albeit courtsey of V.Tech being way more offensively balanced than the ground-assault or heavy infantry approach of G.Tech.

The unusuality is that our Tech the good Tech or V.Tech is actually chasing G.Tech in total D by about 50 yards per game on the year. And here is where the plot thickens —and perhaps even real live Coach Spock science-fact objective determinations can be made…

The other Tech or G.Tech has actually improved on O by nearly 30 yards per contest in their last three, whereas our Tech has experienced a deflationary economy of just at –45 ypg. Or what combines to amount to right at an 8 point swing, away from us even when at home!

Over on defense, we see that both squads are worse off in their last three contests vis-à-vis the year; although G.Tech is in an even deeper ~ –20 ypg deficit than we are. Nevertheless, G.Tech is still approximately experiencing a 6 ppg betterment per the old-school rule-of-thumb of 1 point per every 10 yards of total O. Or to put it a final way… only the Yellow-Jacket O is not so yellow-bellied of late. As all other Thursday night units between these two Coastal clubs’ are in retreat of the Flexbone’s advance.

And although this may not precisely qualify for the always enjoyable  Henry Wadsworth Longfellow pet metaphor of… “two ships passing in the night” —it really is a case of three leaky creaky old PT-boats rusticating, oxidizing and taking on water with one rather serviceable old-school harbor-tug merely chugging right on bye.

As when omitting potential National Champion Clemson, the Jackets of Georgia Tech have out-gained all other teams combined by a very lucrative 884 yards on the year or 126 ypg on average.

Whereas our mighty Hokies have been out-gained three times in six games and when omitting puny Bill & Mary we are actually –98 yards in the aggregate annual hole! That and Bud Lyte has allowed 327, 438 and then 522 in three consecutive total yardage weeks. You do the maths… and do you see what I, mean?

And yeah; bingo that— as V.Tech is .6oo in its last 10 games whereas G.Tech is a bowl ineligible .4oo over the very same timeframe.

However, G.Tech is mo’ than that… upon film, -and this is nearly shocking to see from typically high-demand Option system based high-discipline teams… G.Tech is one other thing. Or things… in that they are very flaunty, taunty, dancy, flexing, sauntering, posing and just downright showy upon breaking-tape. An alpha camera aware team and this team loves the same {sic: camera}.

So the one thing -and it might be the only thing- I am sure of regarding Thursday night? Is to bet the over on any: “extracurricular Prop” line from Vegas. As this one is gonna get testy, then it is gonna get salty and then the 2nd-half will actually kick-off.

And as Coach Ripley’s (believe it or not) goes… Foster has actually improved his leaky pass-coverage in the last several weeks. Although the Bud Lyte trench fighters have oh so quietly worsened by right at 35 ypg. vs. teams that do NOT run for a living.

On the flip side, V.Tech rushing has improved each and every single week under Ry’ Willis spearheaded Qb1 offense. The key, however -and this is *the* weekly key until JAX gets back- the key is Ry’ Willis the passer… (and Corny and Fu’ have been giving him more throw-plays week-by-week mind you as well).

No further ≡ no less.

If you think V.Tech is gonna throw-game “click”?
Pick the somewhat more talented team overall to nick (this one).

If you think the V.Tech gonna get throw-game “picked”?
Pick the somewhat less talented -although schematically very problematic- team to stick.

R.A.T.T. ...Virginia Tech's mens football recruiting will do what from here on out?