Virginia Tech men’s basketball sojourns over to the bluegrass state to play one of the two bluegrass state hardwood factory type of schools. This on a rarefied Sunday night regional Atlantic Coast TeeVee looksee at 6 PM on the ACCNetwork (check: local listings).

The Hokies draw a Cardinal squad that is pretty well back intact from 2019-2020. Whereas most of our 2019-2020 Buzzketball club is pretty well gone. And that’s pretty much how you do the south of pretty maths here folks. As the Louisville Cardinals check-in at a downright shiny looking 23 up and 6 down (on: 14-4 inside the A.c.c. or in a two-way tie (with F.s.u.) for first place at .778 on the year). Or in other words, the last thing the Cardinal can afford is for the Hokiebird to clip their nesting wings with a highly upsetting L in this one. Nonetheless, what you wanna know is who is gonna win and by how much; right? So read on, to find… outs!

Coach Mack Mack started his coaching career as junior varsity head coach at McAuley High School, an all-girls high school in Cincinnati, in 1993. In 1995, Mack was named head coach of the girls’ varsity basketball team at Mount Notre Dame High School in Reading, Ohio, where he received the 1996 Coach of the Year award from the Cincinnati Post.

Coach Mack then went back to Xavier and later to Wake Forest as an assistant coach. Then he landed the big-whistle job at his secondary alma matter of Xavier. Where he only went for this… Big East Coach of the Year (2018), Henry Iba Award (2016), Atlantic 10 Coach of the Year (2011) and the very interesting Skip Prosser Man of the Year Award (2011). Dang. Impress much? Coach Mack has never had an L’ing season as a big whistle at any level. His bottom year was 17 wins and he went to the big dance 90% of the time at Xavier. And although he curiously only holds one conference crown to his credit, coach (big) Mack also holds: 1 final-4, one Elite-8, and not less than 4 Sweet-sixteens behind that. Or in other words… this is (apparently) a big-time post-season pressure-cooker-coach. Then last March Coach Mack inked a very fiscally lucrative seven-year deal at basketball factory Louisville that flirts with nearly $30 XL before it’s all said and won.

Coach Mack is known for his physically brash style, man-to-man D, rebounding, and offensive freedom (i.e. he doesn’t call as many sideline plays); in his signature ½-court O.

The Mack daddy is married to the former Christi Hester, a Louisville native and former University of Dayton and Holy Cross guard (1996–2000). They have three children and resided in Northern Kentucky before he took the Louisville position. In 2017, he earned an honorary degree from Arizona State after beating Arizona in the NCAA tournament.

UofL at a glance:

Basically a 4-Guard bench lives here, which is quite the contrast to the singular (only one true)-G Cardinal starting-5.

Darius Perry 6′2″ and 196 lb. back-up second-year One. Perry drops you 5.4 ppg in relief with a couple of rebounds and just south of three assists. Perry was merely the no.52 kid outta after his Wheeler High School win in the Georgian Class AAAAAA state championship run per ESPN. He did start off-n-on last year and the expectations are higher than the current productions are here. Although his 40% from downtown is none too low, and being on the All-A.c.c. Academic Team is never a bad thing. L.ville.edu props insert (______) here, check; for a lead-G who is said to be able to score inside and out.

6′5″ and 210 lb., rookie or nugget year David Johnson was No. 76 in the land according to ESPN this time last year. And he arrives with some pretty stacked-up expectations let me tell you. Accordingly, 6.4 ppg, with 2.7 rpg and 2.7 apg is neither really here nor there. Although his 22% from deep could use some off-season lengthening. This is a bit of a surprise, as David enjoyed a 3-point shooting rep’ and a tag’ of a player who takes a shine to the spotlight itself in bigger games while winning a State Title over in hometown, homegrown, homespun (Louisville) Kentucky last season. The rep’ here is that of a versatile guy who can slide over in either backcourt direction. From the One to the Two or from Shooting-G back to Pt.Guard just the same. Tho’ Johnson has had a few knee dings and dents along the way (may St.Nikhon bless), he is cut from a Professional family tree. Per F, Ray Spalding (his cousin), who played with the Dallas Mavericks and Phoenix Suns.

Lamarr “fresh” Kimble is a 5′12″ and 185 lb., graduate transfer who was a three-time captain and two-year starter at Saint Joseph’s University. And he has the freshest handle on the team. Did I mention his nickname, yet? As you had better be pretty dang “fresh” if you wanna gloss that. Lamarr’s Keystone school (Neumann-Goretti High School) of Philly fame had won five, that’s (5) AAA state championships in six-seasons and Kimble only pocked two blings there. So, the kid is from a winning background and is no stranger to winning itself. And that’s a pretty shrewd g-Transfer to pine-squad pick-up. As virtually 16 ppg with 4 rpg and 3 apg last year @St.Joe’s does not suck. 5.1 ppg, with 1.6 rpg and 2.7 apg on 31% long right now @Louisville tells you just how thick this Cardinal deck is as one through ten talent(s) go. As this combo’-G who can score and create surely could and would be scoring more if he had a starting role basically anywhere else. (and all of this on 1.somethign good feets. As Lamarr missed basically a full season due to a foot ‘snap’ two years back, may St.Sebastian bless!)

6′7″ and 2oo lb debut year Samuell Williamson is an S/F by way of everything’s bigger Texas. Including his scholastic box scores with routinely read high 20-somethings for ppg and lowercase teens for rpg. As this is a highly athletic-looking Swingman who can get to the glass and put the biscuit in the basket even if a pure shooter he just ain’t; just yet. Still yet, 4.4 ppg and 3.5 rpg in a still-developing beyond his purest slashing elements is not the worst work in relief if you can get it. And most publications (easily) had Sam I am penciled in as the Cardinals 🂡 or Ace of Spades last year recruiting wise. So, let’s ask 2023 (if he is still in Louisville that is- how all of this tastes. As everyone says there is plenty of headroom and a pretty dang cathedral ceiling in play for this Cardinal). What with Mister Williamson only being ranked 15th nationally by 247Sports.com last season. 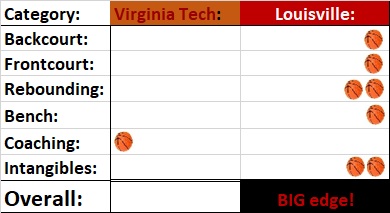 the takeaway:
The takeaway here is… Lindy’s pre-season magazine only tabbed the Cardinals as their A.c.c. alpha bird of prey in men’s hoops for 2019-2020. 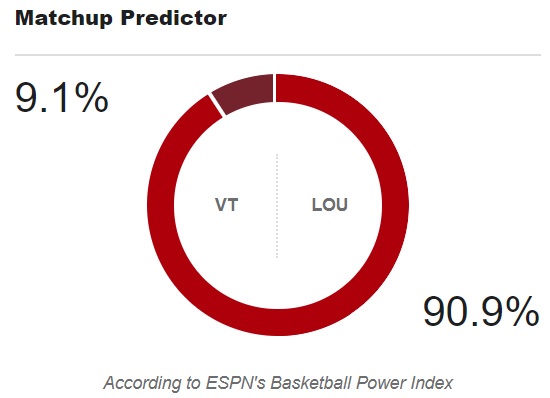 That’s all, no biggie whatsoever.

That, and do be fully awares that the Cardinals close out the regular season month of March with just three games in basically their final three weeks of running-ball. Or in other words there (likely) will not be an A.c.c. men’s hoops squadron with fresher legs come Atlantic Coast Championship time.

Beyond that, and beyond the glaring experience mismatch, the glaring systemic mismatch and a possible let-down trap after such a ValianT rally only to fall short at the end vs. revenue sport 2019-2020 sweeping uva?

This one should be a really good one, right up until it tips-off.

Tho’ what the hey, let’s run the number anyway…

Our handy-dandy friend the so-called Forum Guide of Graham Houston fame is calling for a… never ever seen before summative +229-point Lousiville VomiTorium on Sunday night! As the Cardinals went total Vatican and dealt from more than the bottom of the deck and dealt with common opponents on common Home/Away terms in nothing sort of brutal fashion. Seriously, Louisville went season-1-1. As in V.Tech only beat one team by more than Louisville did and one margin mutual victory was a push. When taken on a per capita basis the Fourm Guide is calling for a more sanitary looking 17-point game of 52-cards worth of O&M pick-up. wowow! Most severe disparity I’ve ever graded this side of us vs. the N.b.a.

The most recent 5-game metrics say that… insanely enough -though this is WHY you run the numbers- insanely enough… the Hokies are actually up +2% in shooting percentage margin (with the Cards really softening up on D of late); the Fighting Gobblers are also up a surprising +4% in 3-point percentage margin (tho’ defensing worse that L’ville, L’ville is a downright icy cold 27% from deep recently), and yet the Cardinals remain a rather commanding +11 in rebounding margin in Windex work for the last fortnight of misses.

Well, -and “aye”, Eye already know… well is for water- and yes, I already R.A.T.T. know as well, our Duck Pond odds to win here prolly do runneth dry.

Nevertheless, I also know that if you give a man a fish he eats for a day.

Yet if you teach a man to fish?

He eats for a lifetime.

Now what the hell any of that has to do with any of this I have no idea?

I do however know that I’ll eat these very words -again- if Virginia Tech upsets the potential 2019-2020 A.c.c. Titleist on Sunday night. After our 384-miles Manifest Destiney or virtually 270° or pretty close to due west come ~10 PM Sunday night.

At least Eye was gonna be bound by all ^that^ harangue…

…right up until I ran the recent 5-game metrics. Whereby we all saw that Louisville is not a team on the (British) proverbial “come” of late. They have redacted more than a little bit in terms of recent play. This leaves a very modest sliver of a crack ajar in their upsetting door.

It is a slim opening indeed… granted.
Tho’ slim is still >>> none.