The Hokies and Dell Curry and Bobby ‘Slusher’ Beecher run ball in the N.I.T. pre-season thingy verses the all-World Memphis Tigers; who could prove to be tough to tame. The same deal then, the same deal now. As this is a very very very very good Memphis men’s basketball squad ladies and gents. In pure Talent terms to be sure. How that all fits/works together remains to be 30-game regular seasonally seen. As Memphis is VERY big, very good, and pretty dang athletic while being: “big” and “very good” alike. Suffice it to say that this one is a tall order. That’s the order of the day. Nonetheless, you wanna know who is gonna win and by how much, rights? So, read on… to find, out!

Baller Hardaway grew up playing basketball in Memphis for Treadwell High School where he averaged 36.6 points, 10.1 rebounds, 6.2 assists, 3.9 steals, and 2.8 blocks as a senior and was named Parade Magazine National High School player of the year. He finished his high school career with a mere 3,o39 points.

At Memphis State University (now gone the University of Memphis), Hardaway had to sit out the 199o–91 season with the Memphis State Tigers due to being academically ineligible. While he was sitting out, Hardaway was robbed at gunpoint outside his cousin’s house and was shot in his foot by a stray bullet, putting his career in jeopardy. After he was inspired to do better in life and to accomplish more, he made the Dean’s List with a 3.4 grade-point average as an education major.

Hardaway achieved a 3.4 cumulative GPA, although he passed up his senior season to enter the 1993 NBA Draft. In 1994, Memphis State retired his jersey number, 25, Hardaway’s number while playing for the Tigers. He returned to the University of Memphis in May 2oo3 and graduated with a bachelor’s degree in professional studies, ten years after leaving school early to turn pro.

Hardaway was named #5 on the list of top 1oo modern college point guards by collegehoopsnet.com. Additionally, he was a leading vote-getter on ESPN Conference USA Silver Anniversary Team. N.I.T. Champ’ (as a baller).

In 2o11, Hardaway took over for his friend Desmond Merriweather as a coach for his middle school alma mater, Lester Middle School, while Merriweather was undergoing treatment for colon cancer (St.Nektarios bless!). With a goal to have each of his players graduate from college, Hardaway instituted a mandatory tutoring program. He coached the Lester Lions to the West Tennessee State title 58–57, finishing 28–3 for the season. After this he was ascended to East High School ass.coach and eventual Big Whistle for the same.

Memphis (2018–present):
Hardaway was then hired as head coach by his alma mater, the Memphis Tigers, on March 19, 2o18. Hardaway was hired to replace former head coach Tubby Smith. In his first year as head coach, Hardaway led the Tigers to the N.I.T. He also secured the number one recruiting class in the country with the commitments of number one rated high school player James Wiseman, D. J. Jeffries, who decommitted from Kentucky; Boogie Ellis, who decommitted from Duke; and others. On May 17, 2o19, Precious Achiuwa, a top-2o five-star recruit, signed with Memphis

Television and film:
Before Hardaway was drafted, he and future Orlando Magic teammate Shaquille O’Neal acted in prominent roles in the college basketball feature film Blue Chips (1994); Both players portrayed college freshmen on the varsity basketball team of a fictional university

He owns a barbershop and beauty salon in downtown Memphis and a turf business based in Miami. In 2o12, Hardaway was announced to be part of an ownership group including Peyton Manning and Justin Timberlake that was to purchase a minority stake in the Memphis Grizzlies.

Penny has a son Jayden who plays guard at the University of Memphis where Penny is head coach. Anfernee also has two daughters: LaTanfernee (born 1992) and Laila Hardaway (born 2oo5)
both with his former girlfriend from high school, Latarsha.
Penny also has a son Ashton that is a sophomore in HS

Memphis at a glance:

r-Jr. year and somewhat/somehow familiar-looking… Landers Nolley II: is a 6′7″, 2o5 lb. lean low-B.M.I. slasher from somewhere or another… He was the leading scorer for Memphis last year (13.5 ppg) tho’ down to 8.0 ppg on 4.0 rpg and 2.0 apg thus far this season. As his 3-pointer has not been dropping at 23% from deep so far. Nonetheless, 1st-string All-A.A.C. pre-season is never a bad thing. Neither is the nearly unique Jewel-Ray look of: having led two-different clubs to two different and two-straight state championships; albeit in two different States! Per one in Chicago and then two back-to-back in Fairburn, Ga., with Langston Hughes High School. Snaps @him; 3-different ones in point of fact. Most of my connections still think LNII is a pro’… somewhere at some level, if/when this Slasher gets his range to lengthen to legit-3-point-range. Seems familiar, too… did I mention the familiarity yets?

This one seems familiar as well… as Jayden Hardaway is a: 6′5″, 2o9 lb., r-junior season lead-G who looks even mo’ familiar with his ‘fro out. This Hardaway has not played a metric ton at Memphis; yet. Tho’ this year he is netting you: 5.5 ppg with 1.5 rpg and 1.5 apg on 67% when dialing long-distance. Does have a localized AAA State Championship ring, and also fields a noticeable: wingspan of 6′11″. As if he wants to go out there and “son” everyone. (Literally…). Deadeye textbook pure clinical shooter on breaking tape as well. Someone father-figured his stroke like a champ.

6′8″, 2o6 lb., nugget or 1st-year-voter Josh Minott is a freaky freak in warm-ups. As he has some krazy throw-down midair leaping looks. And he shoots really close to the rack for it: 7.0 ppg with 3.0 rpg in skywalker relief is on-trend. Ditto Joshua’s stellar 84.6% from the floor, married to 71.4% on FTA’s, and electrified by 100.0% in his trifectas. That’s all. Tabbed by 247Sports as a 4-star recruit and the 29th-best prospect in the nation with on Florida five-A (*****) to show for it. Only made a $10K halftime-contest-shot along the way… so, you’d have to think Minott non-limelight shy. Listed as Lindy’s American Athletic Top N.B.A. Prospect! (And he is subbin’, in!!!)

5′8″, 149 lb., Sr. year Iowa State transfer One, Tyler Harris and his magnificent 70% when dialing long-distance got him included here, wowzo!!! Fan-fave mighty mite, of course, likes to flex/pose when he nets one behind the 3-point arc too. Homespun Memphis kid, who was the 2018 Class AAA Tennessee Mr. Basketball Award winner. Pure scholastic scorer from range, 30.5 ppg average says so. Prolly an exported instant-O just add scorer’s table P.T. for it. 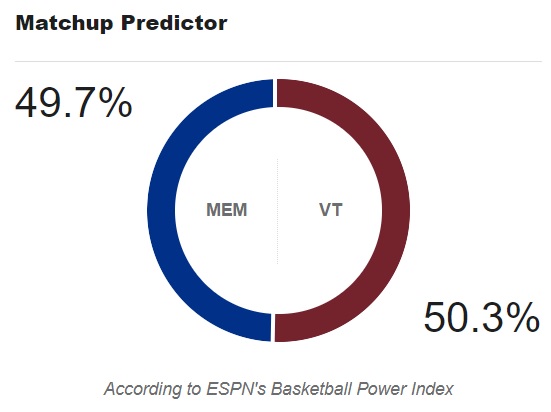 …there is a lot to get Beale Street taken and smitten with here; let me tell you.

As these Tigers are “grrrrrrr-EAT” upfront and they have some very solid Wing-work as well. As in… not real sure we can stop their A-game punch.

Then again, I’m not entirely sure they will land their A-game punch. As they do not always play to the massive strengths (i.e., down-low) and look missive of the same at times upon breaking take.

Tho’ I’ma pretty dang sure we gotta stay outta foul-trouble here; or
this one could get punchy indeed. In spades to boot.

Our handy-dandy friend the so-called Forum Guide of Graham Houston fame is calling for an A.c.c. ask-back or re-up.

The annualized year-to-date vitals say that… Memphis is up +3% in shooting percentage margin (both are O & D great here, Memphis being just a little greater is all); however, VeeTee is up a staggering +14% in 3-point percentage margin (nearly evenly O & D superiority split too), and the Tigers are up one single solitary carom or +1 in rebounding margin. (Both are well above average in Windex work). 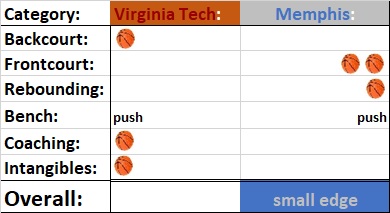 Double-BONUS:
PACE OF PLAY: The upbeat Memphis offense has averaged 78.2 possessions per game, the 1oth-most in Division I. Virginia Tech has not been as uptempo as the Tigers and is averaging only 65.1 possessions per game (ranked 3o6th, nationally).

The Tigers are +2 in R&R.
VeeTee is up +9% at the charity stripe for the year.
Memphis is a .ooo Neutral; whereas VeeTee is .ooo as a Swiss.

Well, here Eye (incorrectly) thought or at least hoped that we/VeeTee would be nationally ranked by now to face likewise nationally Memphis in this made for telly event.

Tho’ there I go yet again… putting the cart before the horse in what some would have me say could turn into a game of “P” “I” “G” vs. a buncha wildcat formation Tigers.

As these doods is… doooooods!
As said above… if/when they come correct.

We do have a better posting bench this year for the first time in a very long-time.
True.

We do have Mutts (who plays bigger than he is) and Aluma down low.
Truth.

How long will the refs allow us to hardwood them though?
Facts???

Tempo is the predicative key here men. We gotta stall-ball this one. As we do not (quite) have enuff freaks to beat Memphis in an Indy Formula-1 T&F meet.

’cause if we shoot well and mo’ or less stay outta foul-trouble long enough, don’t die of shock if coaching the verb makes this one close enough to just nick, late.

As our big-whistle is mo’ than a penny fo’ yo’ thoughts!
He’s a damn dime, piece!

If that does not happen, however…
don’t die of shock if Memphis pieces us up down-low.