Virginia Tech men’s basketball takes to the court for the third NC2A time in a row and since half past when -or since half past never ever- have we ever been able to say, that?!?

The Hokies now face the 22 up and 13 down (6th, 10-8) in the Atlantic Ten Conference Saint Louis Billikens for the right to advance to the Round-of-32. In a game that presents some squirrely looking match-ups, each; way. Nonetheless, you wanna know who is gonna win and by how much, right? Read on, to find… out!

Baller Ford played the majority of his Pt.Guard collegiate career at the University of Kentucky, helping the Wildcats to NCAA Tournament appearances in each of his three seasons. He was a junior on the 1993 Wildcat team that advanced to the NCAA Final Four. Ford transferred to Kentucky after one season (1989-90) at the University of Missouri. At Missouri, he was named to the Big Eight Conference All-Freshman team. At Kentucky after playing sparingly his sophomore year, Ford was a starter during his junior and senior years and set school records in single-game assists (15), single-season three-point field goals (1o1) and consecutive free throws made (5o). Baller Ford went: 5′9″ and 165 salty looking lbs., with 13.6 ppg and virtually 6 apg which is not bad bluegrass work. Neither was being named 3-time All-S.e.c. Academic Team. Nor was being named: All-S.e.c., All-NCAA Regional, or the S.e.c. Tournament M.V.P.! Baller Ford also hangs an extremely rarefied Gold Medal from the so-called 1993: Summer Universiade. Per the winning Buffalo National team. Whatever that means…

After an unsuccessful attempt at an NBA career, Thespian Ford landed the role of Danny O’Grady in the 1997 movie The 6th Man, starring Marlon Wayans and Kadeem Hardison.

After this Coach Ford took up his medium whistle at Campbellsville University. Ford accepted the position, and in 1999 led the Tigers to a 28–3 record, earning Mid-South Conference Coach of the Year honors.

Coach Ford does enjoy the reputation for being something of a program building sharp. Though he has negative (<.5oo) marks for three of the five schools he’s coached. And is a very unusual –17 games under .5oo for it in careerist conference play. Still yet, he left every school not named OK.State with a better recrod than that with which he entry-year began. So the program builder tag is legit; and the pressure cooker or thicker competition part is on less firm ground vis-à-vis. Coach Ford has a stamp for being a slower tempo/more defensive S.Greenberg if you will; and for being a total portal Ace, as the NCAA Transfer lifeline goes, wherever he has been.

Ford, is a native of Madisonville, Kentucky. He and his wife, Heather, have three children: Brooks, Kyleigh, and Shane. Ford earned a bachelor’s degree in communications at the University of Kentucky in 1994.

* Ford has nine (9) vacated wins due to an ineligible Campbellsville player.

Word of the Day: Billiken:

An early SLU football coach, John R. Bender is said to have been the inspiration for the nickname “Billikens,” which is still used by the school’s athletic teams. During the 1911 season, according to one version of the story, local sportswriters commented that Bender bore an uncanny resemblance to a charm doll called a Billiken, which was a national fad at the time. His squad became known as “Bender’s Billikens” and the name stuck. Doll inventor: Florence Pretz of Kansas City, Missouri …is said to have seen the mysterious doll/figure in a dream.

Saint Louis at a glance:

6′4″, 210 lb. Sr. year Dion Wiley (4.8 ppg on 30% deep) is a Maryland grad’-transfer who put up very similar numbers over in College Park as a Terripan career back-up off-G. Though he was the no.52 recruit four years ago outta high school from ESPN.com. And he does enjoy a Maryland state championship bling for his hardwood troubles.

Back-up One (Pt.G.) Fred Thatch Jr. is a 6′3″, 210 lb. nugget or rookie year voter who gets you 4.4 ppg with a reasonable 2.7 rpg, a swipe and yet only drops 36% from the floor and 27% from behind the arc. Fred was the Missouri Basketball Coaches Association Player of the Year in high school last season. Where he averaged 25 points per game and set scholastic records for assists (first >2,000), rebounds and steals alike. So maybe we should wait and ask 2022 how Thatch’s weave, tastes?

As offensive output or outburst or frontcourt size does not live here
(in the Billikens substitute nest). 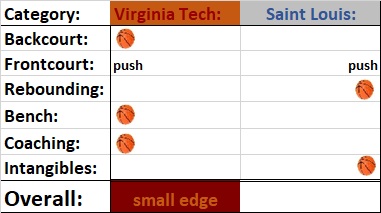 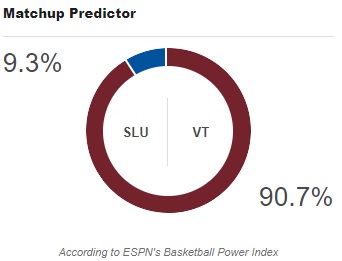 The takeaway here is… that both teams are right, exactly and entirely where they September 2018 A.D. wanted to March 2019 A.D., be!

Nobody is home alone or spring broke as these Billikens (2,082) and these Hokies (2,674) have coach Ro.Frost’s “promises to keep and many miles to go before…” well, before someone sleeps the others season come ~1 AM East-Coast time Saturday morning.

Thingy is… Saint Louis is now ranked 87th in RPI.  (and yet St.Louis was ranked 118th in RPI pre-their underdog A-10 Conference Championship Tourney run… and PROPS on that insert (___) here, check).

Virginia Tech is .833 as a Swiss or neutral court team whereas St.Louis is .667 when neither home or away.

Our handy-dandy friend the so-called Forum Guide of Graham Houston fame is calling for a 13 point Hokie VicTory per each team having faced Florida State in round-robin common.

V.Tech is up a truly unheard of +16% at the charity stripe for the year!

Vegas is calling for a 10 point Hokie VicTory in this opening NCAA round-of-64 contest.

Although as said up above, the Billikens present some squirrely match-ups. Their rotation is not south of 6′3″ in height— and yet it is not north of 6′9″ in height, either. So St.Louis can switch in-and-out and (generally) not match-up as poorly as most. In extra particular vs. a likewise vertically challenged Hurrying Hokie Hoops squad. The Billikens can clip your wings on defense and they can soar on the glass. Two -effort based- metrics that should never ever go cold as defensive (and rebounding teams) travel (i.e. sojourn) better than any other flavor of hoops.

Whereas finesse and/or shooting style teams may find the new  (or rings/rims) too hard or too soft. The new (or building) too hot or too cold. So to speak…

And to me seeing how V.Tech really takes to San Jose (or not); tells me how well V.Tech will take to beating Mississippi State (or not); in the round-of-32. Though there I go again… putting the cart in front of the horse. As

The Hokies seem like they should win here. Granted.

In particular, if Buzzketball is having a good hair day from downtown and “knows the way to San Jose”.

If that is the case I would not die of shock if Virginia Tech covered the spread.

Nevertheless, several things -finally- sank in while pondering just how many 3’s we might just sink during the opining of this preview…

Firstly, everyone had Saint Louis ranked first or second that Eye and my preview magazines could see. Or in other words… don’t let the Billikens regular season mark fool yah. St.Louis was/is a better team than they showed, and the word: “underachieving” truly rings true for this squad here.

Second, St.Louis gave Buzzketball a rather unseemingly looking L just two years back. In a game, we seemed to be realistically favored to win. Though got backcourt handcuffed in. i.e. could it be that these Billikens are a boxing metaphor or a: “styles make fights” kinda team? What if the SLU style of play is all ‘rong for dear ole V.P.I.?

Finally, St.Louis is really good at the very two things that should never ever go Touring cold. Namely, defending and rebounding. They are at least as good on defense as we are and they are even better on the glass.

Can the Billikens muddy this game up? Just enough that they can keep it close enough to win fugly, late.

Could try to mix “5” back into a different O than the one he ran muck things up?

As initially I really liked Virginia Tech here, though do recall the two things I warned about catching… a big ole burly, bruising confusing type of credible Penn.State club. Or a hard grinding, lower/slower tempo club that likes getting down-n-dirty and scuffling their way to a W. St.Louis is surely that secondary category of an ill-matched-(up) team.

Eye favor V.Tech, Eye am picking V.Tech… only thing is that I favor Buzz and Co. here by less than everyone else does— possibly a good deal less at that. Tho’ I do favor Buzzketball on O… check it out…

Still yet, if you are gonna beat VeeTee in San Jose you’d better get Virginia Tech out quick. As you do not wanna see a finessèé buncha shooters take to a given foreign gym and spark that nylon net up right on up.

Tickle the twine here early on and that itch may go irrational on you!

Accordingly, I see this as one-in-done or two-for-one.