Virginia Tech men’s basketball is on to the Round-of-32 thanks to an NC2A game no.1 – triumph over Saint Louis on Friday night. As try as you might you still cannot spell VicTory less the Vee and the Tee.

The Hokies now draw something of an overachieving Liberty Flames hoops squad for their NCAA second-round troubles. An extremely experienced, synergistic, and defensively hedonistic Liberty Flames hoops squad at that. Liberty checks in at 29 up and 6 down on a dream-season kinda year. Including a pretty dang serrated looking 14-2 mark in conference play. Still yet, most will be picking 10 point betting fave Vah.Tech to triumph here. And yet most picked most of the 12th seeds to () advance on Thursday/Friday; and as we all know, the best team does not always advance in single-elimination one-n-done formats. Nonetheless, you wanna know who is gonna win Sunday night at a little after 7 pm over on WTBS, right? Read on, to find… out!

Baller McKay graduated from Westwood High School and played his college basketball at Seattle Pacific University. Winning 21 games as a small-college Independent and basically hovering at/above .5oo the rest of the time. McKay.edu earned his Bachelor of Arts degree in athletic administration from Seattle Pacific in 1987. A stellar Pt.Guard for the Falcons, McKay left the program as the school’s single-season and career record holder for steals, and he was third in career assists. He still holds the school record with 10 steals in a 1987 game against Pacific Lutheran.

McKay got his first head coaching job with Portland State. After a poor first year, McKay led the team to a third-place conference finish in his second season. He used that success as a springboard to his next coaching job, this time at Colorado State. He stayed two seasons there before heading to Oregon State, and then another two annuals at Oregon State before accepting the head coaching position at New Mexico. While there, he experienced mixed success. In 2005, his team won the Mountain West Tournament and an automatic bid to the NCAA Tournament. That successful season helped launch forward Danny Granger into an NBA career. Still, McKay couldn’t turn New Mexico into a consistent program, and in February 2007, he was fired.

McKay then took a job at Liberty University, where he took the Flames to Big South semifinals in back-to-back years. His second-year, with the help of Seth Curry, (did we recruit… him?) McKay led the LU to a Division-1 school-record 23 wins and a bid to the inaugural CollegeInsider.com Postseason Tournament. After the season ended, Curry transferred to Duke University, and McKay’s longtime friend Tony Bennett was hired as head coach of the Virginia Cavaliers. Bennett then asked McKay to join his staff as his associate head coach, and McKay accepted. On April 1, 2015, McKay was selected to return to Liberty University as head coach.

En route to a school-record 29 wins this campaign, McKay’s Flames defeated the storied UCLA Bruins on their home court in Los Angeles by 15 points, prompting the immediate firing of UCLA head coach Steve Alford last December, before the Pac-12 season even began. Ironically, it was Alford who replaced McKay at New Mexico after his firing there nearly twelve years earlier.

Coach McKay has been to the post-season thrice in his second-stint at Liberty six seasons. He has three conference titles and one conference coach of the year award (Big South/2016) to dot his resumè thus far.

McKay has a wife, Julie, daughter, Ellie, and sons Gabriel and Luke.
The McKay family identify themselves as “Catholics.”

Liberty at a glance:

The Ponce, Puerto Rico native and 6′1″, 170 lb. back-up Pt.Guard, Georgie Pacheco-Ortiz… is leading Liberty in shooting from downtown at 48%. And in two more years this means a lifetime of killing it at your local Y.M.C.A. Georgie was/is a pre-season all-Big South selection twice; so there are/were some pretty lofty expectations here. Georgie is a streaky 3-point shooter and he has tended to be a 3-point maker, late— as in late in games. And that makes him a credibly clutch baller should this one be tight at the ~39-minute marker. Ortiz is from Deep Run H.S. in Glen Allen, Va. He has already participated on three Puerto Rican national teams— so experience as a third-year baller he enjoys in spades. G.P-O is said to have some large hands and therefore very deft handles accordingly. Liberty girls, rejoice! 7.3 ppg on 88% FTA’s and 2.8 apg plus all that shooting is not bad relief work if you can get it.

r-Jr. year Myo Baxter-Bell is a 6′5″ sawed-off burly looking 255 cinderblock kinda frontcourt enforcing sub’. The third-year P/F puts the emphasis on the word power as his industrial 220v approach underneath exemplifies. As his 5.5 ppg and 2.1 rpg and a lotta muscling, thumping, and even more muscling all conspire to say. As this Buckeye boy sure looks the cooler/bouncer cut off denim jacket part. As I doubt too many peeps wanna try Bax’ on for size and cowboy-up. 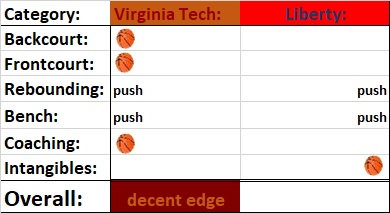 the takeaway:
The takeaway here is… what is the Vegas big-board total on the Over/Under on the number of minutes Buzz Williams has left in his Virginia Tech big-whistle career? O/U=40? O/U=80? O/U=sum multiple of 525,600?

As more and more the behind the scenes “whispers” are gaining ground on going full blown chatterbox and that might just end the whole shebang in the finest possible O&M version of a c.Dickens of a so-called: “Town, Crier.” 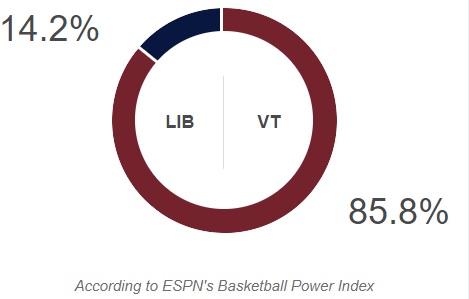 That’s not good and neither are “distractions” this time of the one-n-done year. As the national media is now starting to swirl and or tempest the Buzz to aTm vibes all the mo’.

Or in other words, how much longer -whether Buzz goes; or, stays- until this looming move moves from the realm of: “distractions” into the even less favorable realm of: lack of reactions? As “red” Auerbach once so brazenly put it… “instigate, never retaliate”. As the zebras/refs/officials always call the second thing, first.

So where is our Rx-time (reaction-time) after so many rumors regarding Buzz calling a 24060 version of Century-21? i.e. how much further/longer can this go until it R.A.T.T. has an unceremonious O&M cause & effect?

V.Tech is .867 as a neutral this season and Liberty went .5oo when neither home nor away.

The Flames are up +2% at the charity stripe for the year.

Liberty was picked bottom-3 (or worse) by all my pre-season magazines in Atlantic Sun {sic: conference} terms.

So my use of “overachieving” in the header may have been anti-hyperbole up above. i.e. M.Pop’s and my medicine may not have been… strong enough.

Because if you called Liberty winning the A.Sun Conference championship before the Vegas betting window closed in October? You, good Sir are rolling larger than I; and larger than most.

So, by my calculus… “yes” Liberty is peaking at the very best possible time. Or to put it another way… this is: “you say tomato I say tômato” kind of basketball at its finest.

As one other Commonwealth team is peaking at the very same time and what Liberty -to their surging credit- does do rather well indeed; Buzzketball and Virginia Tech do even better.

As we out-shot Liberty by a handsome 17% on three fewer shot-attempts back in October. Think about that one a little-minute sports fans… Then we out-rebounded them by 200% and change. Mainly per points in the paint and second-chance points. Which we punked Liberty by 212% and by a staggering 420% once we shifted into high-gear and kicked this pig and made Liberty flame-out and go final 20 minutes: “oink”.

As tempo was and will be the key here, Liberty we can run and out-athlete and we can do this in particular when penetrating the shorite populated Flames lane. (and for that matter go right at S.James and see how the referees respond. “Act like a champion” or at least the higher seed). Ditto like the finesse look of Liberty which reminds me of another in-state team and that’s a dream match-up for us indeed. Up the roundball velocity and beat and/or challenge them in the paint.

That’s the key -so to speak- to this one indeed folks.

As Eye foresee mo’ points here than anyone else (apparently) does.