Virginia Tech men’s basketball continues what can only be described as it is better to receive than to give on Christmas Vacation, or at least we would have…

The Hokies now head back down to Tobacco Road to court then 9 up and 3 down (now: 12 up 6 down) basketball factory U.n.c. This after having given Duke a pretty sporty 1st-half and then having received more depth -in particular in the frontcourt down-low- than they could successfully unwrap in the final 20-minutes of courting. Be dat kinda really outlying Revenue Sport(s) scheduling year for both fiscal clubs. As this is now officially sammwiching 1o1 or make make-ups N.B.A. less than restive fit as best you scheduling can. Now, and after getting fu’gly cracked-up up on Chestnut Hill, we now draw a mere (then:) #34 (now:) #38 ranked T.Heel squad in terms of the Associated Press’ (others receiving, votes). As we are about to find out just how much our somewhat muddled looking and slightly underachieving 2o21-2o22 men’s hoops team has left to, give. Nonetheless, what you wanna know is… who is gonna win and by how much, rights? So, read on… to find, out!

Baller Davis Davis attended Lake Braddock Secondary School in Burke, Virginia, averaging 28.0 points per game his senior year. After the fact, Davis went on to the University of North Carolina, where he holds the record for the highest career three-point percentage in school history. In his junior year, he helped lead the team to its first Final Four appearance since the Tar Heels won it all in 1982. After averaging 21.4 points per game his senior year, he graduated in 1992 with a degree in Criminal Justice.

The New York Knicks then selected Davis with the 20th overall pick in the 1992 National Basketball Association Draft. He made the winning free throws after Hue Hollins called a disputed foul against Scottie Pippen in Game 5 of the 1994 Eastern Conference semifinals against the Chicago Bulls, giving the Knicks an 87–86 win.

Davis remained with New York for four years and was traded to the Toronto Raptors before the 1996-97 season. After Toronto, Davis spent time with the Dallas Mavericks, Washington Wizards, Detroit Pistons, and New Jersey Nets. Davis played his final N.B.A. game in 2oo4, finishing with career averages of 8.2 points, 1.5 rebounds, and 1.7 assists per game. Davis’s nearly 44.1% N.B.A. career three-point shot percentage ranks him third behind Steve Kerr and Seth Curry. Or, living the life 1o1…

Starting in 2oo8, Davis began working for ESPN as a college basketball analyst. Then on May 2, 2o12, Davis returned to U.N.C. as an assistant under then-head coach Roy Williams. Davis also served as head coach of U.N.C.’s junior varsity basketball team, the only JV team in the A.c.c. He helped the Tar Heels win the 2o17 NC2A Men’s Basketball tournament.

Williams retired on April 1, 2o21. Four days later, on April 5, Davis was announced as the 19th head coach in Tar Heel basketball history, and the first African-American to lead the program. Although Davis had never been a head coach of a varsity team at any level, Williams had been grooming him for a head coaching job much in the same way that Dean Smith had groomed Williams during Williams’ time on the U.N.C. bench as an assistant from 1978 to 1988. For example, Williams had handed Davis the reins of the JV team in order to give him experience leading a team in real-time.

Poppa-bear Davis and his wife Leslie have three children: Elijah, Bobbie Grace, and Micah. Elijah will play college basketball for the University of Lynchburg starting in the 2o21-2o22 season.
When at the conference announcing his hiring as the UNC basketball coach, when
prompted about being the first Black UNC head coach, Davis caused public
debate by stating he’s proud to be African-American,
yet also proud that his wife is white.

Davis is a devout Christian.
bra-vo!

North Carolina at a glance:

Leaky Black -grate grate grate name- is a 6′8″, now 2oo lb., final-season, bean-pole baller who has a history of left-ankle rolls (may St.Phillip make that alright). Tho’ he did amass just a little bonus right-mass this off-season; finally. Leaky did pocket a title leading Cox Mill to the 2018 3-A state championship (Nc.) And he sure seems the highlight tape part. As a strong off-the-dribble guy who seems capable of more than 3.3 ppg and 4.2 rpg to me in pure athletic/kinetic terms alone. As he was a towering H.S. Qb1 who got a few eye-catching long-looks Pivotally speaking here. As this is a diverse, defending, and distributing Wing whose taking is not (really) his problem. Although his 2o% from 3-point land just does not mesh well with his: 41.2% from the floor and 86% FTA’s at all. As this guy is another micro-me M.J. Great mid-range and only so-so or less from long. (UPDATE: not making well of late…)

Senior, 6′5″, 21o lb. Ryan McAdoo -yes, he is related- is an unusual r-Jr. season Florida Gulf Coast University to U.n.c. transfer basketballer. As Ry’ (same as Leaky) has that *it* or vertical look-n-feel to his game as a pure Three or S/F. His poppa-bear {sic: Bob} was merely the No. 2 pick in the N.b.a. Draft, was only the N.b.a. Rookie of the Year in 1973, the Associations’ MVP in 1975, and a five-time All-Star. Senior McAdoo -who was instant offense and rebounding off the Showtime pine- won N.b.a. titles with the Lakers as a player in 1983 and again in 1985. Accordingly, a lot is legacy expected here. (More than his careerist: 1 ppg and .2 rpg (no typo’s) I mean). That said, Ry’ did finally put some meat on his wheat and some meat in his, seat. Looks noticeably stronger to me on film.

Anthony Harris, a 6′4″, 195 lb. Woodridge, Va. in-state escapee was also said to be out for the year (left-knee meniscus, St.Nikon help here too) last season. Well, until he came, back. Back are his sniper-like marksmanship shooting that generated 7 ppg on 43% long and 88% from the charity stripe last year. Now down to 2.6 ppg on 6o% deep and 88.9% from the free-throw-line makes you wonder if he came back too soon in linear terms? (As: he had apparently used what looked like a wrap-around gray-shirt season to me… tho’ that does not count this campaign, right?) As this kid can flat out shoot… and it makes you wonder what he’d be shooting on 2-good-wheels? (UPDATE: now listed as: “OUT”, some say for the duration… reason(s)=”unspecified”. Godspeed here!) (One source says this could be his 2nd-blown-A.c.l., one per each side, St.Culbreth triple-double, Bless!!!)

Kerwin Walton G (no relation… he be keepin’ a medium-complected tan); Kerwin is a 6′5″, 21o lb., double-Sophmore shooting-G. He is a 2019 ‘Sota State Champ’ and a rook-card badminton player on the side (no joke). On the hardwood he has a rep’ for marksmanship; tho’ his substitute metric of 31.1% long accurately does not so well pop-quiz, attest. Kerwin also nets you 3.6 ppg, with 1.6 rpg and .7 apg. The vibe here is that he can also pass pretty well and defend (1 spg) very well and the 94% FT-shooting last season only led the A.c.c. Did Eye mention the gold-medal free-throwing yet? As this kid is a pure sniper and if he continues to matriculate as a stopper and facilitator? There will be a 3-n-D foreign gym home for him. Although his output is nearly cut in ½ thus far this year. Makes you wonder if he is dragging some flavor of ding/dent along a bit… as he’s a better baller than this. His own history says so.

…I’d be mo’ taken with our chances here if this one was only being contested @Home. 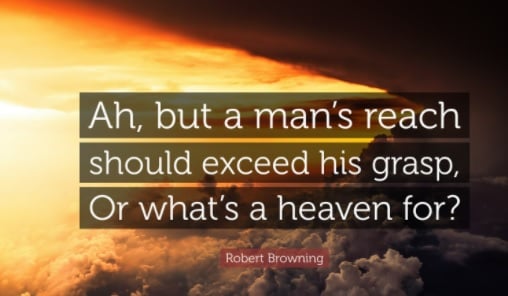 As you have seen above and will further see below… U.n.c may not be outta our depth. And as coach Robert Browning used to teach… (see: pic).

i.e., S&C (in particular the: “conditioning” part) will be at a premium here.

As we are about to log over 1,7oo+ miles in about 48 hours and it will be most curious to see if our shooting legs arrive just in the “Nick” (Nolte) of time, or not?

Our handy-dandy friend the so-called Forum Guide of Graham Houston fame is calling for a highly outlying 33-point t.Heel kicking. When taken pro-rata… it still amounts to a 7.77 VomiT. As these are two really sketchy/uneven squads. Tho’, U.n.c. did kick a few peeps when they got them down to boot. 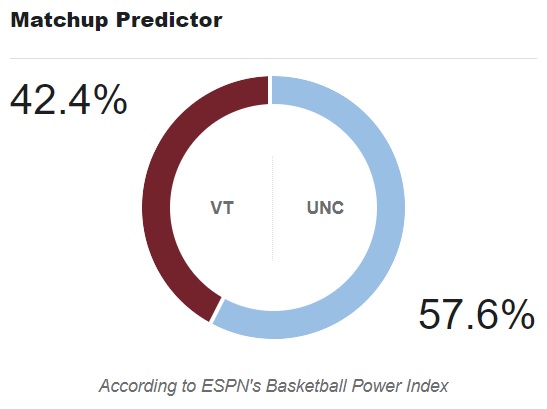 The annualized year-to-date vitals say that… VeeTee is up +2% in shooting percentage margin (all on D with U.n.c. a snifter better on O); V.P.I. is up +9% in 3-point percentage margin (mostly from O&M D, tho’ a little from O as well), and yet Nor.Carolina is up a decent looking +8 caroms in rebounding margin Windex Wipes year-to-date. (VT was barely positive (+1) here annually, however).

The most recent 5-game metrics say that… the Hokies are now up a nearly staggering +11% in shooting percentage margin (shockingly, mo’ on O, as the Heels have really chilled out of late); then the Gobblers are up a nearly drunken looking +14% in 3-point percentage margin (again, the Heels cannot make a “3” with a pencil and do not bother to defend the same); however, the t.Heels are still up +9 in rebounding margin of caroms in the last couple of weeks.

HOME IS WHERE THE SKY-BLUE HEART IS?
The Tar Heels are 9-o on their home court. North Carolina is fourth in college basketball with 28.7 defensive rebounds per game led by Armando Bacot averaging 7.9. Dang… 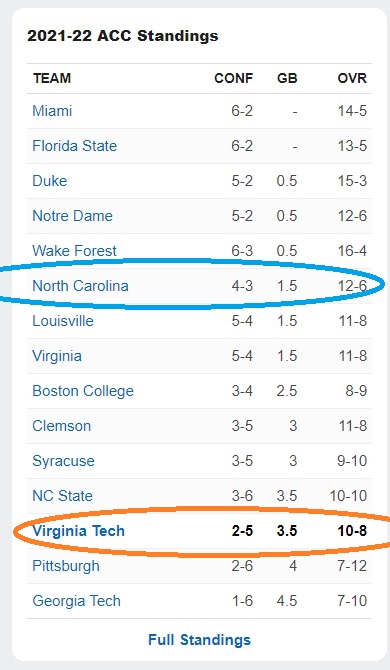 CHAPEL HILL, Nc., BAROMETRIC PRESSURE, DROPPING?
The Tar Heels have shot 40.3 percent from the field in the games that they’ve been beaten. So, there are your in-game millibars of Mercury for Monday nite.

“WHISPER(s) SAY…”
Coach Davis is worried about ‘practice man’, yah; we talkin’ ’bout practice (or the lack of utility therefore outta the power-blue-chips). On the other side, they hear that Coach Mike is worried about 2nd-halving and about rebounding to boot. The Nor.Carolina mummers also say that this year’s squad may be physicality, adverse.

And this just in… my weather.God sourcing indicates that: “…rain is still rumored to be… wet!“

The caveat is… they (i.e., U.n.c.) seem to suffer from less fit -or maybe a bit more juxtaposition- than Duke did. As the Dukies -even though possibly less individually talented vis-a-vis- seemed to team-work better together. Whereas the t.Heels are not (yet) a smooth-Modine blending. Kinda a black-n-tan gone off-trend layered ‘rong— with Duke and Coach K being a bit mo’ seamlessly… old-fashioned.

Because if they get you in a half-court settled defensive set… having to shoot over that much length could prove to be a very long nite indeed.

There is also the little factoid that U.n.c. has been beaten by: 9, 17, and by 29-points in three of the four nationally ranked contests they have faced thus far. Meaning… this is a good U.n.c. team, it is not (yet) a great U.n.c. team. As 75% of their legit opponents have taken the top off of them by 55-points combined or by 18.33 ppg on average.

Then we see that U.n.c has been truly scalped by 50-points combined in the last week of hard-wooding runs. (By: two clubs (Miami+Wake) with 3o combined wins between ’em)!

This to me indicates a (potential) opportunity to give the t.Heels something of a flatfoot here.
IF, we can land our A-game shooting punch and/or if the lessor version of U.n.c.
is still receiving lottsa Christmas Broke, Holiday eggs upside their noggins.

And in lieu of any firmer Winter Has Come traction on either mercurial squadron here?

I’ll side with the home team who does engender greater sleeps/rests of late.