Virginia Tech men’s basketball team tries to rebound after a somewhat unkempt looking home upset L when the face the mega O&M hot tix of the year in the North Carolina Heels this Wednesday night over in a slightly warming New River Valley.

The Hokies entertaining a very underwhelming looking 8 up and 9 down U.n.c. team that was not picked lower than third in the All Coaching Conference by any of my preview magazines. And yet now the blue-man-group resides at a post-season fenced looking 15th place in the A.c.c.! Fifteen outta fifteen if you are keeping McDonald’s All-American score at home. As the Heels are a virtually shocking looking .167 or 1-5 team inside the A.c.c. thus far this campaign. And if you picked this one back in September come on out and take a late January cyber-bow. Yah; “Roger that” on me neither… nevertheless, what you wanna know is who is gonna win and by how much; right? So read on, to find… out!

Baller Williams lettered in basketball and baseball at T. C. Roberson High School in Asheville, NC all four years. In basketball, playing for Coach Buddy Baldwin, he was named all-county and all-conference for two years (1967 and 1968), all-western North Carolina in 1968 and served as the captain in the North Carolina Blue-White All-Star Game. Williams has stated that Coach Baldwin was one of the biggest influences in his life. Williams went on to play on the freshman team at the University of North Carolina at Chapel Hill and study the game under legendary coach Dean Smith. When Williams was a sophomore at Carolina, he asked Smith if he could attend his practices and would sit in the bleachers taking notes on Smith’s coaching. Williams also volunteered to keep statistics for Smith at home games and worked in Smith’s summer camps.

After coaching golf and hoops in high school for five years; in 1978, Williams came back to the University of North Carolina and served as an assistant to Coach Dean Smith until 1988. During his tenure as an assistant coach, North Carolina won the NCAA national championship in 1982, the first for Smith (and Roy); and second for North Carolina. One of Williams’ more notable events came as an assistant coach when he became instrumental in recruiting a nobody who was already cut from his H.S. team, some kid named… Jordan. After that, taking over at Kansas, his Jayhawk career was riddled with wins (28 per year on average!); conference titles (9); and more a few recruiting foibles as well. Since getting home to U.n.c. coach Williams has notched two national championships (2oo5) and (2008). Coach Williams is the only basketball coach in NCAA history to have 35o or more victories at two NCAA D-1 schools {sic: Kansas and North Carolina}. Coach Williams is the only coach in NCAA history to have led two different programs to at least four Final Fours each; wow. In 2oo7, Coach Williams was inducted into the Basketball Hall of Fame. Coach Williams’ teams have made the post-season 29 outta 30 times. He was won a stunning 15 different coach of the year awards nationally or in-conference combined. He has won 23 total regular season or tournament conference titles and put 39 kids into the Association.

As 10 different Heels have run in at least 12 games here and everyone -all seventeen; that’s (17)- of ’em have balled in at least six runs thus far. i.e. mega depth lives here and fatigue is NOT an issue for this many McDonald’s All-American issues.

Justin Pierce is a 6′7″, 21o lb. rarified Bill & Mary (grad)-transfer S/F to U.n.c. Pierce finds his way to 5.6 ppg and 4.4 rpg as a kid who arrived with a label for being one of the most coveted transfers of the off-season. Pierce is a first-option kinda kid who shoots well and rebounds with authority. As this was a 15 ppg, 9 rpg and 41% behind the arc Tribal baller; and frankly mo’ was expected here. (not related to Paul BTW). Even if his 4.9-grade point average (out of 5.0 scale) is pretty much a .edu triple-double. Great on dat.

Leaky Black -grate name- is a 6′8″, 195 lb. sophomoric bean-pole baller who has a history of left-ankle rolls (may St.Phillip make that alright). Leaky did pocket a title leading Cox Mill to the 2018 3-A state championship (Nc.) And he sure seems the highlight tape part. As a strong off-the-dribble guy who seems capable of more than 5.4 ppg and 4.6 rpg to me in pure athletic/kinetic terms alone.

Walker Miller is a 6′11″, 230 lb. third-season P/F by way of New Hampshire H.S. ball where he put up okay tho’ not necessarily @U.n.c. scholastic numbers. Walker is an honor roll student (UHC.edu props); he basically provides match-up length in relief (.5 ppg, .4 rpg) while not being listed in my preseason preview mags. (tho’ older bro’ (Wes) did win the 2005 national championship at U.n.c. and you have to wonder if this was a nepotistic take?)

6′10″, 259 lb. Brandon Huffman is one flexing/mean-mugging guy who would prolly make one helluva a cooler/bouncer if he wants the after-hours bar-scene work. Seriously, this dood looks 35 (years old) and Huffman is nothing if not physically filled in like cement. As this was a kid with some serious Deadliest Catch type hauls as an Anchorage, Alaska native. Where Huff’ earned first-team all-state honors in Alaska leading West Anchorage to a 4-A state title with monsta rebounding and blocking high school digits (17.5 rpg, 4 bpg) alike. Though only with 1.3 ppg, 1 rpg and 1 bpg on 60% right now.

(point being… this is a towering T.Heel team and a very tough match-up in the half-court) 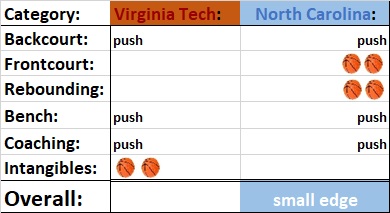 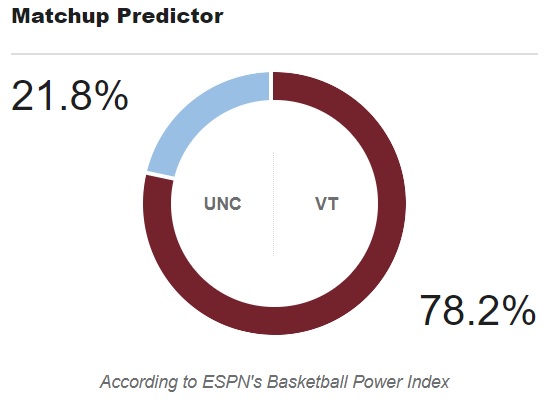 Seriously, this may not (quite) be virgin territory, tho’ this is about as low mileage as it gets.

As history says to bet U.n.c. here and to basically bet U.n.c. on the blind to boot.

Our handy-dandy friend the so-called Forum Guide of Graham Houston fame is calling for a 5 point T.Hell, upset VomiT over in Blacksburg, Va. by ~11 PM Wednesday night.

The most recent 5-game metrics say that… the Hokies are up +5% again in shooting percentage margin (mostly on D however this time); with the Gobblers now up +12% in 3-point percentage margin (with a little more D credit than O for V.P.I.) and yet the Heels are now up +12 in rebounding margin (as V.P.I. is not hitting the glass of late).

For a change, VeeTee is up 5% at the charity stripe for the year.
U.n.c. us up a very unusual +6 in R&R in the last fortnight of play.

It sure does want to feel like we are catching a slumping Nor.Carolina club at just the right time.

Our VT.edu student body will be back, this is a very hawt tix down in the recently <32°f 24060, our refugee Buzzketballers will be shooting @home, and U.n.c. does have to sojourn 201-miles to play the Hurrying Hokies on national T.V. in this one here.

And yet this is just not a good match-up for us… presuming these mental Achilles Heel’s and downright dysfunctional Carolina functions at all as Coach Thomas Paine’s basic hooping Common Sense goes.

Nevertheless… U.n.c.’s overall defensive marker has loosed up a bit in their last 5-games, and the yet Hokies have chilled late January out on O. Thereby canceling out any user-friendly looks from the sky-blue crew and thereby making this one a push not named rebounding margin.

As it does not take a rocket surgeon to see that U.n.c. should dump the ball down inside and into the low-post vs. the vertically challenged Youngsters and take their chances closer to the rack on Wednesday night.

If they do this we are in for a long-haul as our little O&M engine that could goes… if however, we conduct ourselves well from the outside, or something is truly Tobacco Road train-track switched, we do have a fair to middling shot to nick or steal one vs. much-vaunted U.n.c. here.

Ergo, therefore, to Whit; do you favor the smaller outside shooters at home or the towering traditional Three through Five match-ups inside?

As Eye for one ‘capped this game to a virtual “Winter is here” dead-heat push.

That and our slowing-starts have been aging our Youngling coach of late.