Today’s word of the day is… sapiosexual. 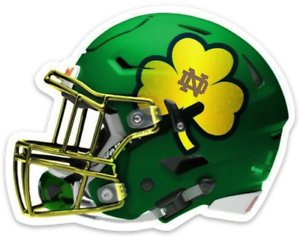 Kelly then went to a pretty well-kicked Central Michigan University football program where he only turned C.M.U. around in one year and got to a bowl game in year number three. After that, he was off to Cincy where he posted a seminal-looking 36-6 mark including four bowls in four seasons and two New Year’s Day bowl invites with a perfect season in his final (12-o) year!

Coach Kelly then landed most any up-n-coming coach’s dream job @South Bend. As the Irish big whistle coach Kelly has gone an entertaining and job-holding .611 overall for N.Dame. This includes a low-water mark or Irish Potato Famine of 4-8 in 2016 and nearly all the vacated wins from 2012-2013 (o-4 official mark; with 21 wins vacated) due to the use of ineligible players. This also included the Sugar Bowl season that climaxed in a dubbing by S.e.c. Alabama to boot.

Daddy Kelly has a wife, Paqui, and three children, Patrick, Grace, and Kenzel. Paqui, after surviving breast cancer, went on to start the Kelly Cares Foundation.
May St.Nektarios bless! 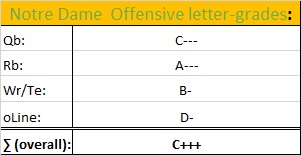 Readers note:
So, as you know… N.Dame got upset @home last week vs. the upstart Cincy Bearcats, right?

i.e., N.Dame is a better football team than that… if/when they clean any of that, up?

(readers note: N.Dame does NOT catalogue career stats…
so this is bullet-point cobbled together best Eye can).

Notre Dame is 40th in Net Punting and so is P1 Jay Bramblett. Don’t get too much mo’ leg game senior prom sexy than being named the: #2 punter nationally by 247Sports.com folks. Jay is a true Jr. year P1 who has a career-long of 61-yards with zero Punts blocked thus far. As the Alabama and Texas H.S. all-star native seems like a bit of an exalted directional punter more so than a pure Ray Guy boomer. Very consistent P1 however as he makes solid contact and nets you a lotta singles and doubles leg-game-wise.

Final year and Charlotte, Nc. or PHNC’s crib native… Jonathan Doerer is your K1 for N.Dame. He of the unusual-looking twist-top red-frost ‘fro fame mind yah. Kid ‘n Play nonetheless, his 70% is useful enough on FGA’s thus far this year; although he does already tally on P.A.T. shank. Jonathan has been your K1 for three years now and he clearly has enough experience underfoot at this stage. The odd part is he yo-yo’s just a bit once he hits the mid-30’s on the Holder’s spot of the ball. As before that, he is virtually automatic with only one career miss. After that, he has counted 10-career-misses. Even if he does have range out until right at 50-n-change what with 3-collegiate makes of 51 or 52-yards. Jon.D. has kicked off for N.Dame off and on throughout his Irish career. So, leg-lift seems willing enough. Doerer was the no.6 K1 in scholastic terms per Scout. And he does have his ND.edu degree framed already. Thus, making Doerer a kinda good K1, tho’ not quite a great K1. As he has a history of slumping annual kicking finishes too boot.

Special Teams letter-grade:
Notre Dame does nothing specialists real bad. They are average to better when taken in broad-brush terms. And yet you keep waiting for a more Italian Renaissance moment from this many VHT’s in-waiting in the kick-game wings. Flat B that should be at least a B+++.

Number of Irish who could shamrock @Tech= 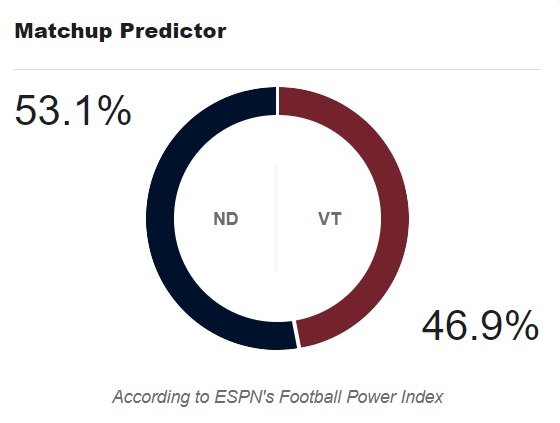 …the takeaway here is that although this is big, bad, and historically exceptionally well-fabled and highly-esteemed pantheon Notre Dame… what with their: 22 national championships from NCAA-designated major selectors, 11 of which are claimed by the University. And with their seven different Heisman Trophy winners… (septa-PROPS!!!)

…the Four Horsemen this year’s squad just, ain’t.
(at least not experience/learning-curves, yet)

There is Talent here… granted; although it is mo’ parts Tully Blanchard and Barry Windham
and less parts Minnesota Wrecking-Crew much less R.Flair.

Chris Coleman beat me to the punch here… tho’ a 3-hour-stomach-ache or a Pepto kinda contest is RIGHT in Fr.Fu’s pet-game-manager wheelhouse.

Or, in other words, the longer this one goes and stays close… the mo’ it does NOT favor the bigger named team. Pressure bursts I.R.A. Steam Tunnel pipes if you will.

formulae here favors:
^^^that^^^ being correctly clinically stated… there are the Jimmy’s and the Joe’s. N’est-ce pas?

And N.Dame has nearly 300% more BIG-plays already generated this year than the somewhat fascicle or partially bundled Cliff’s Notes Fu’fense. This means N.Dame (and their better passing-Qb) can chase better in closing and they can also hit for power better in front of that.

And it also means they and their last recruiting cycle VHT’s are deeper by-the-bye. Meaning:… Fu’ and Corny need to cornhole the game-clock here and let the Dean Smith 4-corners air outta the pigskin and shorten this one so that the deeper team does not show out as the fresher team late in a potentially scoreboard delinquent contest.

#ChallangeA.c.c.epted… there are 1,440 minutes in a day and… frankly, VeeTee needs to win prolly close to 59-minutes of this scrum to have a
fair-to-middling shot at this one.

the optics…
…in terms of the modern broadcasting ‘basketball on grass’ or scoreboard gone The Who’s Pinball Wizard kinda game?

Eye doubt it… as this one could indeed have Fu’gly football contest written all over it.

3-game splits,
…in their last 3-game, the Irish O has slumped by nearly 70-ypg (yards/game). Mostly due to mostly cloudy airwaves. The Irish D has only slipped by a nominal 10-ypg or basically one 1st-down. (Which is pretty dang salty when you see that the N.Dame O is doing them NO incoming field-position favors whatsoever).

…on the other side, the Fu’fense is up about 12-ypg or a bonus 1st-down. Whereof O&M green-eggs and j.Ham has improved by about ½ a 1st-down allowed in ypg. This is either consistent, or this is… peaked. Think about that and then take thy pick.

H/A splits,
…the Irish O has a buncha M.Gibson Road Warriors this year… what with nearly +70-ypg; virtually all of which is an aerial assault increase. (NOTE: this was also a vastly healthy oLine and Qb1 to boot). On the other side… the Irish D has been nearly centennially worse or mo’ user-friendly in your house by about –110-ypg (nearly equally suspect on the run/pass split).

…on the Hokie side, the Fu’fense is within 6′ of being perfectly static home vs. away. However, j.Ham and Co. are just a smidgeon stouter at home; in particular in defense of the ground-gainers.

Our handy dandy friend, the so-called: Forum Guide of Graham Houston fame is merely calling for a fortnight ask-back as round-robin play begins to ‘chirp’ in earnest soon enough.

Virginia Tech has only broken the 3-score barrier once this campaign— or 25% of the time. Now, you tell me… who has mo’ halt-unit swagg?

On the other hand, the Irish have cracked the 27-point barrier 80% of the time.

Hidden-yardage, hidden-yardage, mo’ hidden-yardage, or even a miscellaneous yard or three. As there is more than a little offensive riffraff on tap in this one… all the mo’ so if the New River Valley gridiron gets spongy or downright, wet.

And yet then I found this… Cincy tallied 10 points on a whopping 20-∑-yards worth of offensive drives! As less two short, shorter, or shortest fields? That game was a proud as a peacock network sister kisser.

…or in other words, Cincy only outgained N.Dame by 40-n-change and needed a lotta Irish Car Bomb’s to go (selfie) off to nick what was a very even contest less a fair-to-middling amount of N.Dame, help.

Do you think the F’n Irish will be this helpful for 8-quarters, straight?

Then however we attend to the quirkiness of the metrical following…

The VT O is outgaining the VT D by an astounding 12′.
Whereas the N.Dame O is being outgained by the N.Dame D by an even’ less astounding –21′.

Or in other words, when you combine all four Totals’ (2-∑-O’s ➕ 2-∑-D’s) you get a nearly entirely centrist National Ranking of: …79th best! (Recall: this campaign there are officially: 130 D-1 men’s college football teams).

Or in final words… unless some underwhelming unit rises to the occasion, this one has C— caliber middleocrity written all over it. As pretty insanely enough, 61.4% of 2021 college football slots north of these two when taken as an aggregate indicium.

i.e., this is {sic: offensive} Tweedledum vs. Tweedledee.

However… N.Dame is stuffing the run in their last 12Q’s of ‘ball… per a measly 73.3 ypg allowed down in the trenches. This is great for 6th best in all the land! Or Paul Revere football… one if by land and two if by air— if you will. Because I must be the only VT-football-media member that thinks N.Dame really should start the best chucker on either sideline here. And thereby dare the Fu’fense to wing their way to VicTory come 11 PM or so on Saturday Night Live.

Incoming to this chaste contest… both clubs have kinda/sorta C+++ traipsed around a bit— although elements of both fan-bases have (somehow) classified this as positively “trampish” or D+++ indeed.

Meaning… someone is gonna do something to bushwhack and/or ambush the other side here at some point in time.

And if defense is your thang or your 1960’s Paul Horning swagg?

You’ve prolly honed in on the right, place.

1st one there?
Wins!