The Hokies are on a roll. Tho’ there I go again… always putting the cart in front of the horse. As Coach Popcorn and Company are still tinkering and puttering and sorting out their 2o22-2o23 -looking good so far- roles. The Hokies are looking about 2 to 4 deep at the moment, depending upon opposing match-ups. Hopefully, that goes pine-squad +1 once we learn how to cook with Rice. That being said, now is a grand time to mess around with this/that as your Top-9’ish goes. What with 2 up and 1 down (Old Dominion) coming to town. The Monarchs are okay as mid-majors go. They beat Maryland Eastern Shore and poor little ole VA Wesleyan ‘okay’ enuff. Before getting done by Drexel themselves. So, we are the rightful hardwood favorite here. Nonetheless, what you wanna know is… who is gonna win and by how much, rights? So, read on; to find… out!

Baller Jones graduated from Apollo High School in Owensboro, Kentucky. He was inducted into the Apollo High School Hall of Fame. His father, Bob, is a former coach of Kentucky Wesleyan, which he led to the 1973 NCAA College Division title. That does not inherit a Natty Championship ring suck.

Collegiate baller Joes you may recall… as he played point guard at the University of Virginia from 1978 to 1982. As a four-year starter at Virginia, Jones was known as a leader and prolific passer. During his playing career, the Cavaliers compiled an overall record of 102-28 (.785), while he led the Cavaliers to two NCAA Tournaments and two NITs during his career. Virginia captured the 198o NIT title and advanced to the NCAA Final Four in 1981.

Jones finished his career as Virginia’s all-time assists leader (598), and his 200 assists during the 1979–80 season were UVa’s single-season record. Despite being drafted by the NBA’s Indiana Pacers in 1982, Jones never played as a professional. He graduated from Virginia in the same year with a Bachelor of Science degree in Psychology.

Coach Jones is a streaky College men’s coach. As you can see at the right, he streaks high-side well; then he ways-n-means appear to wear a bit thin. Kinda seems to have a bit of a tolerant shelf-life be that @u.Va. (God Bless them), @American or now @O.d.u. Reminds a bit of our very own s.Greenberg for it too. Tho’ the high side is smart enuff. Check it out… 6 of 8 post-seasons hit for the Cavs, 3 post-seasons notched in his final 6 years for the mended Eagles (AmericanU), and now 3 post-seasons at the start of his current Monarch tenure. Big Whistle Jones has crests and vales alike. He carries a Terry Holland pedigree remember as well. He is a non-Steph’ Curry era or non-backcourt guy; (in spite of having been a star One his ownself). Very inside-out play-caller philosophically. Hence, his roster(s) craves bigs, of which he only has 3 currently @O.d.u.

Daddy Jones is married to the former Danielle Decker of Virginia Beach and is the father of three children, Meghann, Madison Perry, and Jeffrey. Jones is a Past President (2o16-17) of the NABC.

Jr. year, 6′7″, 222 lb., Dericko Williams F, is described as a: “phenomenal athlete”, this kid can and will posterize dunk on your azz if you let him challenge at or near the rack. Tho’ that plus 7 ppg with 5 rpg and a close to the said rack 57% in relief is not the worst frontcourt sub’ work if you can get it.

Imo Essien is your backup Pt.Guard or One off the bench. Imo goes 5′11″ and 177 lbs. by way of big-D or Dallas, Texas. Essien is a jitterbug quickster, tho’ not a textbook sharpshooter (25% when dialing long-distance).

6′5″, 185 lb., Charles Smith IV is considered the best 3-ball man on the squadron and one of the mo’ stellar marksmen in Sun Belt terms. He too is a transferring in: (Southern Methodist U) Two or shooting-G by trade. 46% over at Eric Dickerson and Craig James fame U from behind the arc would seem to be a: you do need to check him behind the same, hint. Charles was only a (****) or four-star recruit by ESPN and the No. 31 ranked wing in the country according to ESPN. He really helped his recruitment stock go bull-market with a sensation 63.6% shooting marker from deep while out on the made-to-showcase circuiting/touring teams. This kids’ range is the gym… if he is in it? He is… open.

Faizon Fields, P/F, 6′1o″, 22o lb., second-season Four from Memphis, who some thought to be a sleeper get of sorts. He is your only other big here… 3.3 ppg with 3 rpg and a swat is how developed he currently is. Chipola (Jr.College) come-up baller, who had solid defensive/rim-protector digits last year at an obviously lowercase level (9.7 ppg with 8.7 rpg tho’ on an eye-poppin’ 70% from the floor).

…O.d.u. is a middlecase Sun Belt team in most of my magazines.

Although they sag just a mite and rise not at all in a couple of the partly-cloudy Sun Belt ones. They are ex-of-Conference U.S.A. this season to boot. And the jury is still out on all these changes and movements inside the coaching hoops sewing circles over in/around Norfolk, Va will ultimately pan out.

Meaning this is a team in transition… albeit one that prefers a serially slower, pace. 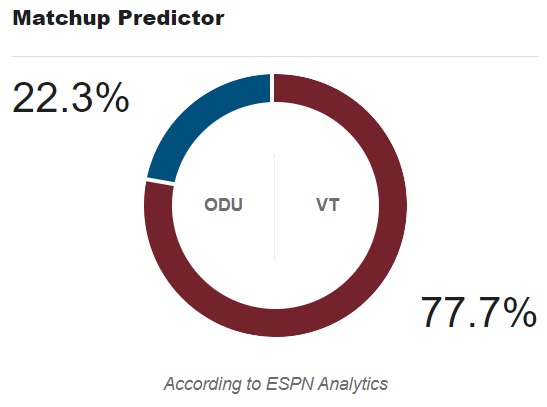 Our handy-dandy friend the so-called Forum Guide of Graham Houston fame is calling for a December round-robin A.c.c. ask back.

The annualized year-to-date vitals say that… VeeTee is up ~+10% in shooting percentage margin (O is big-O hollar back good here); with V.P.I. up a sharp looking +16% in 3-point percentage margin (thanks to: a chilly O.d.u. on O and very warm O&M shooting with decent Cassell defense of the 3-ball), and yet O.d.u. is up +4 caroms in rebounding margin for the year-to-date. (O.d.u. is mo’ positive than we are tho’ +7 on the O&M glass is solid enuff in Windex Wipes).

O.d.u. has a couple of keeper pieces and not much behind that.

Stanley being the alpha among ”em— he could help us @Tech. And maybe one or two others could fill out the Youngster bench or hint at rotational minutes.

The coaching sewing circle vibe here is… that they also field several individual pieces in lieu of Together Everyone Achieves, Mo’. The additional vibe is that Coach Jones is additionally unhappy per the same.

O&M sourcing seems to vibe that Mr. Popcorn sees this as his sternest test so far. (We woulda said, Lehigh). Tho’ and either way… 4o-minutes worth of time=tell there…

Nevertheless, Stanley notwithstanding… after that?
Not so much.

The Hokies lead the series 14-1o; although, the Monarchs have won four of the last five meetings. They also have hauled in 33-offensive-boards in their last two games. So, that is worth monitoring here. Even if we appear to be: A (Torgy) Bridge Too Far for them overall.

Our only bother is… is there any lookahead trap in play here with a (seemingly) loftier Charleston Classic Tourney set of Bigger named team(s) on tap next?
🤔

We get our revenue sporting revenge here folks.
The only calculus is… by just how much?