Virginia Tech men’s basketball sojourns 321 miles up to my hometown to guzzle some I.C. Lyte and wash all of dat down with some Bimbo’s Pizza!

The Hokies are nearly in the same boat as Wednesday night— facing another team in need of some post-season qualifying love and/or wins. As the Panthers are (barely) treading .5oo water at 12 up and 13 down (and 2-10 in Atlantic Coast Club play). The Panthers are officially in rebuilding their man-cave (or should I say: “rebuilding their men-den”) mode and they are prolly a year
-or two- away from being officially rebuilt. Still yet, this game is on the road where the A.c.c. visitor wins about 3 in 10 times @Away. Nevertheless,  you wanna know who is gonna win this one, here. Read on, to find… out!

Baller Capel ran hoops at Duke University (1993–1997), where he earned a starting position as a freshman and was a starting guard on the basketball team for four years. On February 2, 1995, in the regular season game played at home against UNC, with Duke trailing 95–92 at the end of the first overtime, Capel hit a running 40-foot shot at the buzzer which sent the game into double overtime. Although Duke lost the game 102–100, Capel’s shot was hailed as one of the most memorable plays in Duke basketball history, and it was nominated for an ESPY Award for College Basketball Play of the Year. Capel’s college career was marked with success. During his years as a Blue Devil, he racked up 1,601 points, 433 assists, and 220 three-point field goals. He finished his career among Duke’s all-time Top 10 in minutes played, three-point field goal percentages, three-point field goals, and assists. Also earning his Duke.edu degree.

(nepotistic) Coach Capel began his coaching career serving as an assistant coach under his father, Jeff Capel II, at Old Dominion University for the 2000–2001 season. In 2001, he joined the coaching staff of Virginia Commonwealth University as an assistant. He was promoted to head coach of the Rams for the 2002–2003 season—making him, at the time, the youngest head coach in Division I men’s college basketball (27 years old). In his four years as head coach at VCU, Capel guided the Rams to a record number of wins (79) and the highest winning percentage (.658) of any Division I program in the Commonwealth of Virginia. Following the 2003–04 season, Capel was named both the Richmond Times-Dispatch and VaSID state Coach of the Year after leading the Rams to their first NCAA Tournament appearance since 1996.

On April 11, 2006, Capel was named the head coach of the Oklahoma men’s basketball team, succeeding Kelvin Sampson. As the big whistle for the Boomer Sooners, Coach Capel had one really sharp Blake Griffth fueled season (Elite-8), made the round of-32 one other time and was spring broke and Merril Lynch (see: below) scandalized in the meantime. As Coach Capel teams seem to be either: very very good, C+ good or not good at all. (i.e. not a middle ground or WWI type of coach).

Daddy Capel is married to Duke alumna Kanika Réale Blue. They were married in 2003. The two had their first child on April 26, 2007, Cameron Isabella Capel. Two years later, the two had a daughter, Sydney Gabrielle Capel, and three years after that, they had a son, Elijah Blue Capel.

*  At Oklahoma, two seasons ago… all wins were subsequently vacated due to using of an ineligible player, Keith “Tiny” Gallon, who had received impermissible M.Lynch benefits

Pittsburgh at a glance:

Khameron Davis goes 6′4″ and is a muscular looking entry-year S/G at a cut-up 195 totally chiseled lbs. He is said to be primarily a defensive stopper at this youngling stage of his college career. 2.3 ppg, 2.4 rpg with a swipe and the former team lead at 54% (now down to 31% for this campaign) from range makes you wonder a bit on all of that, as does Davis’ quickness and agility marks which are chart toppers; and all of that from a football (Ss) recruited kid with a floor-burn rep’ just looking for a place to happen.

Stockholm, Sweden imported native 6′9″, 210 lb. Kene Chukwuka nets you 3.8 ppg and gets you 3.5 rpg in relief as a frontcourt combo’ P/F-C type of baller. Kene went out and found 20 lbs. of mostly right-mass, this summer and is said to be a rebounding stretch-F who has a high motor as a defender after spending a year at New Mexico Jr. College. Across the pond, Chukwuka’s blue-n-gold Cross (Sweeden’s flag) numbers were not exactly neutral on scoring, as he averaged 30 ppg on the club circuit back home in Sweden for the Trelleborg Pirates as a high school Sr. So there appears to be some measure of productivity and/or offensive swagg somewhere, here.

Sidy Ndir is also a Euro’ circuit imported hoopsters all the way from  Cosne, Burgundy, France. Sidy goes 6′3″, and 81.64 KG (~180 lbs.). He is technically a g-Sr. from New Mexico State and brings backcourt toughness, experience and 6 ppg on 54% from the charity stripe and 24% when dialing long-distance. So “oui”, clearly Sidy is playing for his defense and not for his offensive acumen. 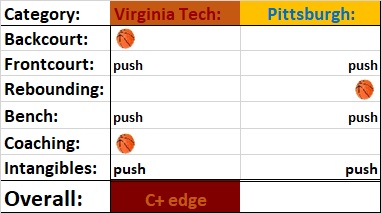 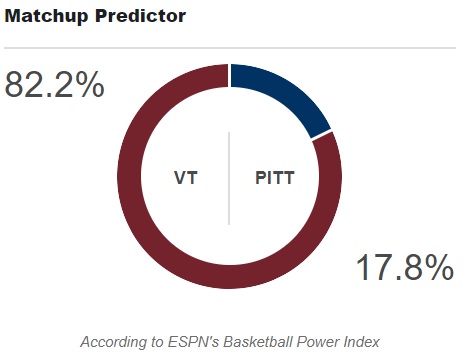 The takeaway here is… both teams have been taking on water as I typed. The Duck Pond swamping U.s.s. Hokiebird and the Allegheny River foundering U.s.s. Panther alike.

Thingy is… V.Tech actually has some talent and even more injuries than that. And the Panthers have some rebuilding left to do.

There is a training-room differential in lieu of what should be a real live talent-gap in play here although that makes no nevermind once this one tips off.

As {sic: being} hurt is just a helluva an equalizer in any indoor sport. Although Buzz and Co. did just get P.J. back and did get up off the O&M mat with a rather useful win vs. Georgia Tech on Wednesday night in the New River Valley.

As Eye would absolutely favor the Gobblers to gobble the Panthers up -if healthy- and yet as we are not, accordingly, all bets are off out on the road, here.

Our handy-dandy friend the so-called Forum Guide of Graham Houston fame this week -highly unusually enough- includes O.O.C. (out of conference) and conferential reference points in round-robin format alike. The Forum Guide is, therefore, is calling for a 10.3 VicTory on the road; and frankly I’d take a 9.2 triumph right now and just call the whole shebang off with you know hoo looming next. (this was mostly due to V.Tech playing better early head-to-head and then Pitt play really bad head-to-head of late).

The most recent 5-game metrics say that… the Gobblers are now up +11% in shooting percentage margin (mostly on Pitt’s defensive slip), then up a nearly whopping +16% in 3-point percentage margin (all less 12% on Pitt being “bear” Grylls defensively: “slippy”) and with Tech now up a useful looking +5 in rebounding margin in the last fortnight of runs.

V.Tech is up +4% at the charity stripe for the year.
Although Pitt is +1 on fresh-legs R&R.

The Panthers opened up under new big cheddar Chapel shiny enough at 6-zip and clawed their way out to a nearly surprisingly 10 up and 3 down mark. Which really was only 2 FT-makes removed from a rather prosperous 12-1.

Then Soul II Soul struck. As did a fugly o-7 or seven-game Atlantic Coach Chump streak and things were… ♬”back to life… back to reality… back to the here–n–now.”♪

As the Panthers appear to have a Conferencing thorn in their paw indeed.

As Pitt just blew a halftime lead @BeeCee vs. an F’n Eagle squad balling with 40% of their starters. Finishing 1 for 16 to close or 29% on the night. Yikes!

Or in other words, everything I found/read and R&D’ed up above sure seems like these Panthers have been tamed and/or domesticated of late. Mutual of Omaha Marlin Perkins this just ain’t. The real guy (Jim Fowler) doing real work with a real dart gun for M.P. this, is.

As I do feel better about Buzzketball with a longer bench and I’d surely like to see us get this one over with, pronto, quickly and A.S.A.P. and empty the same {sic: the bench} to conserve as much “chi” or energy for hosting the team you love to hate on a very quick N.b.a. ‘esque looking turn for Monday night.

I like -although not exactly full-blown love- the Hokies to do enough to win here;
as the Panthers have been tail-spinning of late.