Today’s word of the day is… sycophant.

origin: mid 16th century (denoting an informer): from French sycophante, or via Latin from Greek sukophantēs ‘informer’, from sukon ‘fig’ + phainein ‘to show’ 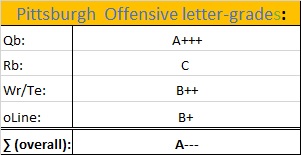 Pittsburgh is 81st in Net Punting— and curiously enough, so is Pitt P1, Kirk Christodoulou.

This is up from the 121st in Net Punting nadir two years back. Or quite a Crocodile Dundee is Kirk’s cap. Kirk is yet another (young) Man Down Under. Or imported Aussie punter the same as our own, (per Melbourne, Australia). Kirk goes 6′1″, 225 r-Sr. season lbs. Down in ‘bloody’-‘roo-land, “keptin” Kirk was a standout Australian rules football player before embarking on his goal to play college football in America. Kirk worked with the renowned Prokick Australia program that has produced many successful collegiate and N.f.l. punters alike. Kirk has a pretty dang healthy leg when he gets it into the pigskin bladder, 44 career punts >50 yards and seven >65 for his bigfoot career says so. Kirk can and has changed field-position all by his ownself before. Kick also has faked one on the ground last year —that went for negative-seven nowhere. He additionally has a higher off the turf than normal toe-to-leather impact point. Go’on and aim high(er) if you wanna be a blocker, here. This is a very good very leg-game-willing Punter, who will only get better and he prolly does have a Pro’ strength leg: be that N.f.l., C.f.l. or Aussie Rules Football southern hemisphere ‘down-under’. Mr. Christodoulou also enjoys one mo’ collegiate career tackle than you and I combined; so, there is that too. He just needs some punt-coverage love; as he’s individually improved quite a bit off of a pretty impoverished 2018. (And this is an A or B-Gap wider punt-protect formation Eye’d enjoy challenging on speed-rush-max’).

Sam Scarton is your K1 for Pittsburgh. And he is one hard K1 to grade. As he has not got much use at all during his debut college Place-Kicking season. As the r-Soph., 6′1″, 195 lb., K1 is still -to his credit- perfected about ½ way into the 2021 regular season. What with being 5×5 or 100% on his FGA’s (fo’ for fo’) or a Moses Malone kinda Kicker if you will. However, and most oddly enough, slammin’-Sammy is only 93.75% on his P.A.T.’s (at: 30 fo’ 32). That said, from what we can limited data-point(s) see… Scarton (great Pa. name) has range out into the mid to high-40’s. Although he did hit two makes in the lowercase 50’s in scholastic terms. (With a career-long at any level of 52-yards if you are keeping score at home). A study of Sammy’s high-school KO numbers seems to suggest this is about the edge (max’) of his collegiate range. As he has a good tho’ not quite Lee Majors bionic leg. Scarton also earned three letters in soccer and three in track and field at Hickory H.S. So, he does bring some athletics to the F.G.A. look and that brings a potential FG-fake into play. Additionally, big-bro’: (Jake) was a two-year walk-on kicker with the Pitt football team (2017-18). Little bro’ Sam is also a walk-on K1 with Pitt… so, you gotta bet the over on the leg-game-D.n.a. of momma-bear Scarton here. Finally, Sam is a freakin’ Norris Hall
-esque mechanical engineering major! And the next time I K1 read that will be the second! Pitt.edu professional degree props insert (______) here. Check.

Panther Special Teams letter-grade:
…in a word? Average. NOT bad. NOT great. Just middled. Lowest possible C+ or so as there are a few athletes here and at some point, you have to think they get all athletic. (Tho’ there are misQ’s and gaffs here capping this ST’s grade as well)

Number of  Panthers who could claw @Tech=13

…well, and in all candor?

We are not sure just what there is to (R.A.T.T.) takeaway here?

’cause this far this regular season you ask?

It has taken NOT less than 42-points/game to put these highly offensive Pitt Panthers, down.

Now ask yourself thusly… do you really think that the Fu’fense has even 41-points in it?

xxx‘s & ooo‘s
Well, what we see is… the best Pitt O since Jocko Sutherland.

Did Eye bother to mention the Pittsburgh O, yet?

formulae here favors…
This time the formulae favors NOT having to chase.

This is NOT a quick-hitting high-voltage Fu’fensive O. It is Alice the Maid 110v, domestic. Not 220v. Not industrial. Not electrifying. An ‘open-circuit’ for you Dr. Jasmin (J.J. of Arnold’s poppa-bear VT.edu fame) or Mr. Electrical Theory for E.E. fans.

Hence, we must stay close, and amp up the Time-Keeper in our favor.

#ChallangeA.c.c.epted… there are 1,440 minutes in a day and it will take high-50’s worth of minutes to tame this one here. Maybe even extra-innings or 65-odd-minutes.

the optics…
Last year… was the Panther’s 11th consecutive season with five L’s or more. Including all eight seasons since moving to the A.c.c. Ergo, therefore, to Whit…

…one could nearly argue that Pitt is due…
(to ‘bounce’ in horse-racing terms).

Or, could possibly soon to be Nationally ranked Pittsburgh be in a look-ahead trap-game what with BIG-name-Klempson on tap, next? Eye wonder…

The Panthers (4-1 overall) enter the game averaging 52.4 points a contest and haven’t scored less than 40 in any game all season. Pitt is led by quarterback Kenny Pickett, who is having a monster year. Pickett has completed 72 percent of his passes for 1,731 yards and 19 touchdowns, with just one interception.

3-game splits:
…well, here we see that Pitt is really heating up on O. Nearly 600 ypg heating up from vaulting forward on their throw-fits in particular. The Panther D is about a couple of 1st-downs allowed mo’ friendly of late. Not a great sign, tho’ not off a cliff either.

On the other side… both the Fu’fense and O&M eggs and j.Ham have both softened by about 1 1st-down to the worse per side of late.

H/A splits:
…well, here we see that, invitingly enough, visiting Pitt plummets by about 70-ypg of Total O! With passing dropping off worse than the ground-gainers did. The Panther stop-unit likewise plummets by nearly 60-ypg worth of Total-D in your house! Nearly all of which was aerially suspect.

On the other side… the Hokie halt-unit moved by right at 3′ and the Gobblers O moved by right at 15′. This is only to say that both sides of the O&M LOS (line-of-scrimmage) are highly consistent be they scrumming @home or @away.

Our handy dandy friend, the so-called: Forum Guide of Graham Houston fame is merely calling for a very soon, ask back…

Agent’s Fox Mulder and Dana Scully, dumbo’s magic feather, and every eleventeenth prime number bigfeets, and I all “want to believe”.

And what if this one starts to get away from Fu’ and company, late?
As VT/Frank/Fu’ may indeed have it in for neighborly U.n.c.

Though the coaching-sewing circle says Duz’ has it in for all things VeeTee.

And if this one starts to slip away from us… and Duz’ decides to pump both-barrels into our side?

There are times during the practice week when the Panthers’ offense will break it down by yelling “1,2,3 … 50,” a nod to the unit’s goal of scoring at least 50 points per game.

Could they worst-case drop a cool fiddy, here?!?

Meaning someone had got to make a play(s), who’ who do we have to R.A.T.T. accept the offensive sportlight? Least we get Delilah, clipped?

As they’ve done studies you know… 60% of the time Sex-Panthers(s) work every, time.

And oh BTW… if we get pegged good-n-hard by these kitty-cats?
Welcome to the realm of (5:7:5) Bye-Fu-Haiku.