The Hokies took at least a lowercase peach (basket) of a club up in Annapolis—vs. a pretty fair-to-middling squad that just proved rather disconcerting to you know hoo… the game before. So, that’s a pretty good anchor to drop on what some thought to be a bit of a trap and/or a test game in the 2-hole. Now, we move on to slot no.3 and we see none other than neighborly Radford U. Of wondering, or socially itinerate Sacketts, The Bus-Stop, Macado’s, and what not yesteryear “girls’ school” fame. As Radford does field a couple of rather reasonable looking Big South frontcourt pieces here. Nevertheless, what you wanna know is… is that gonna be enough to piece big-bad A.c.c. VeeTee up? So, read on… to find, out!

After going undrafted out of college, Nichols went on to play professionally for Atomerőmű SE, a professional team in Hungary for one season before suffering a knee injury that ended his playing career

After one season playing professionally overseas, Nichols turned to his former college coach Bob Huggins to begin a coaching career, starting at his alma mater West Virginia as a graduate assistant. He was named an assistant at Northern Kentucky in 2o11 and spent two seasons with the team before spending a season each with Wofford and Louisiana Tech. He joined the coaching staff at Florida in 2o15 as an assistant on former Louisiana Tech head coach Mike White’s staff.

Nichols earned his bachelor’s degree from West Virginia University in sociology;
and is married to the former Courtnie McKinney.

Radford at a glance:

Xavier Lipscomb is your Pt.Guard2, at 6′2″, 195 lbs. in his second season. Lipscomb is more of a halt-unit guy or defensive stopper. Drawing your toughest offensive cover off the pine of his very own defensive accord. Two State (Va.) Title blings outta Dee.Cee. does not suck. Neither does X’s just over 40% from trifectaville, or his near-team leading 81.1% free-throwing. 6-n-change as ppg goes from a back-up One who can defend and shoot is no bad work if you can get it.

6′9″, 245 lb., r-Senior year Lewis Djonkam is your one true-C here. Drops you a serviceable 8.8 ppg, 5 rpg, and a swat in relief on 63% from the floor on putbacks and bunnies. V.C.U. baller originally. Kinda sorta plays the role of a controller -if not quite an enforcer- and played it pretty decently in scholastic terms in/around the B’more Maryland area. Strong kid on tape, mature in all ways at this stage of his career. Prolly closer to 6′11″ or Fletch -esque with the blowout kinda blonde/reddish dyed ‘fro too.

Shaquan Jules 6′8″, 245 lb., Jr., is another thumping-looking kinda guy down-low for the Radford Highlanders. And it ain’t no Pulp Fiction when I say he looks the part. Samuel L. gotta be his favorite thespian here yo’. Won a couple of lowercase Floridian titles regionally in High School terms. Has been a banger the whole entire way. Drops you about 9 points and 4 boards and a send back off the pine. 69% tells you where he lives relative to the rack. Does have a few .edu thingys listed… so he’s not just an ugly face by way of: U.S.C. Aiken (where he hit for nearly 14 ppg mind yah!)

…well, we all hope we don’t get (too) taken/smitten with any RU girlfriends on Monday night, right? 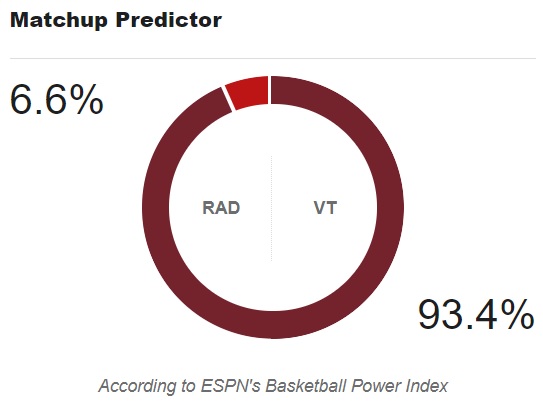 Eye mean… they is just teachers or schoolmarms waiting to happen, right?

On the other side… the four of us behind the scenes is wondering… does Coach Mike have a seminal or touchstone nearly downright necessary emerging 3-headed monsta on his hands over in the 24o6o?

As in… Virginia Tech’s Keve Aluma, Justyn Mutts, and Storm Murphy have combined to account for 43 percent of all Hokies points this season. Maybe that’s not Kareem, Worthy, and Mag’… tho’ any old-school basketball book will have me tell you… it takes 3-stars to truly… shine.

Now mix in Hunter (Byron Scott) Cattoor and Nahiem (‘silk’ Wilkes) Alleyne …and well there you… I mean there Eye go again.

Putting the cart out in front of the horse.
Though this horse can win many a ’round-the-world or offensive game of: “P”, “I”, “G”.

Our handy-dandy friend the so-called Forum Guide of Graham Houston fame is calling for a 12th month ask back once we get an overlap in around our Venn Diagram.

The annualized year-to-date vitals say that… V.Tech is up a handsome +14% in shooting percentage margin (10% of which was defensively better!); the Hokies are up a nearly mind-bending +25% in 3-point percentage margin (3rd best nationally in 3-point D will do dat you know), and the Gobblers are up +3 Windex-wipes in rebounding margin on the glass. (Both teams are pretty close to break-even here).

Bonus: all the VeeTee backcourt statistics Eye study are sharp to the point of being: serrated.
Efficaciously just shredding 1-2-Wing play at the moment❗️

Armchair Pt.Guard’s:
The diligent Virginia Tech offense has turned the ball over on just 13 percent of its possessions, the 29th-lowest mark in all of Division I. 23.8 percent of all Radford possessions have resulted in a turnover.

(Remember: Turnovers and or +/- possessions are the K.C. Jones basketball camp
as a kid necessary battle-cry)

VeeTee is up 10% at the charity stripe for the year.
VeeTee is a 1.oo host; whereas Radford is .ooo as a guest.
Nobody is up anything + in R&R. Per the xxact same game-spacing.

As in… Mike Young, now in his third year at Virginia Tech, returned to his stomping grounds after guiding Wofford (S.C.) for 17 years. Darris Nichols, in his first year at Radford, came home after 10 years as a college assistant.

Young, 58, and Nichols, 35, both members of the Radford High School Hall of Fame, know each other well. Nichols served one season (2o13-14) as an assistant at Wofford, helping guide the Terriers to one of their five NCAA Tournament appearances under Young’s watch. Last year, Nichols was on the staff at Florida when the Gators edged the Hokies 75-7o in overtime in the opening round of the NCAA Tournament.

Pretty neat, right?
Though on to the game itself…

Add-in kinda physical to be a small-conference school and I’ma inclined to agree.

Most of my preseason mag’s (which is to say: “all” in this case), tab Radford 3rd or4th best in-conference at worst.

I’m not so sure… as in I’ma not so sure these pretty decent and very experienced/developed inherited parts fit Coach d.Nich’s dimensions? Check it…

The Highlanders are getting most of their scoring from their backcourt as Bryan Hart (11.0 ppg), Camron McNeil (10.5 ppg), and Josiah Jeffers (10.0 ppg) are the leaders.

Not exactly playing to one’s strength(s) —or a systemic in transition or CTRL-ALT-DEL. 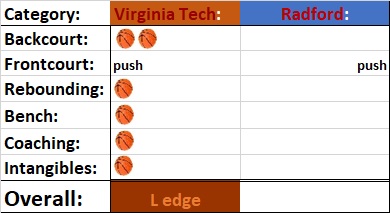 Ergo, therefore, to wit… yes, Radford has some things down-low that could ante-up and kick-in.
Granted. And if they do; and if their new backcourt leaders focus on makes rather than takes?

They could make some noise later on in the Big South campaign…
…tho’ this early they just looked outta-synch from what Eye saw vs. hooVa.

And right now (i.e., this early) is prolly a good time for some
Radford-girl-time fun, right?