Virginia Tech men’s basketball is off to a swift start… and this just in… my sources hint that rain is still rumored to be… “wet”.

The Hokies are a triskaidekaphobic or thirteen just (13) votes removed from being Top-25 nationally ranked if you are keeping score at home. Hopefully, this 3-nil Hokie crew is just 80-minutes removed from going 5-zip to begin 2021-2o22. Tho’ there Eye go again… putting the cart out in front of the horse. As next up we catch a hard/strange to ‘cap 1 up and 1 down or .5oo or even St.Francis of Pennsylvania or Keystone state fame. As I found out in this preview, this buncha Red Flashes can do a few things well, and a couple of them they are nearly great at doing. Is that enough however and who will win this one is what you wanna know, right? So, read on… to find, out!

Rob Krimmel (born September 27, 1977) has been the men’s basketball head coach at Saint Francis University in Loretto, Pennsylvania since 2o12.

Alumni-Baller Krimmel ran ball from 1996 to 2ooo for Saint Francis. As a One or Point-Guard and same as Quarterbacks in football, Pt.Guards tend to make the best coaches in hoops.

A tremendous three-point threat and a two-time ESPN The Magazine Academic All-America selection as a four-year Red Flash player, Krimmel was a three-year starter and two-time team co-captain. He led the N.E.C. in three-point field goal percentage (43.5%) as a senior in 1999-2ooo and is fifth on the school’s all-time list with a 39.8 percent three-point shooting accuracy.

In addition to his on-court accomplishments, Krimmel received numerous awards as a student leader. He was the first-ever recipient of the Dr. Philip Benham Scholar-Athlete Award, which is given to Saint Francis student-athletes who exhibit outstanding academic and athletic excellence. He attended the NCAA Leadership Conference in Orlando, Fla., received a prestigious NCAA Post Graduate Scholarship, and was the N.E.C. Men’s Basketball Scholar-Athlete of the Year in 2ooo. He also received the University’s Mr. Frankie Award, which is presented annually to the outstanding male student in the senior class.

The lowercase Coach-k has made the playoffs in four of his nine years at the St.Francis big-whistle helm. And kinda/sorta was flirting with a look-n-feel of having turned the proverbial corner after a strong four-year run preceded last season’s letdown of sorts. As Krimmel is the second-winningest coach in program history (already) with 125 total wins. Which says a lot about the program’s lack of (successful) history.

Daddy Krimmel and his wife, Aileen, reside in Duncansville with their two sons, Alex and Thomas. Aileen also graduated from Saint Francis with a Bachelor of Science
in Health Science and a Masters in Physical Therapy.

St.Francis at a glance:

Josh Cohen 6′1o″, 220 lb., r-Soph., P/F or stretch-F of sorts and is your one real frontcourt sub’ in the St.Francis rotation. Josh is netting yah 7.5 ppg and getting yah 6.0 rpg on 68% in relief. Efficient bugger down low, who was a High School 6′ guard as a freshman, Cohen grew to 6′10″ over the last three scholastic years! Can you say… clothing budget inflationary economy? Tho’ you can see the backcourt skill-set on tape, and there may be some remaining frontcourt headroom to grow into here. As Josh enjoyed something of an outburst scorer rep’ up on The Jersey Shore.

5′12″, 19o lb., Soph., Zahree Harrison is a backup One or Pt.Guard2. Who plays for his D and to Qb2 the O in relief. As his 28% from the floor is pretty orange-(rim)-paint chippy indeed. Tho’ his Philly H.S. squad did finish #1 in-state; and he did merit some .edu scholarship offer love as well, so there is that… maybe mo’ basketball will come? 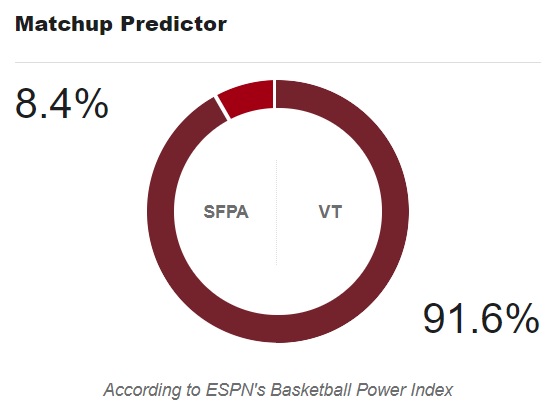 …kinda hard to not get (way too early) seasonally taken away with Coach Mike Young and Co. right now, is it not?

’cause do recall… our one pre-season foible raised to the possible bugbear power was: “this team can defend as well as they choose to defend.”

And we were indeed concerned that they might just lay it out to play it out as: “our best defense is a great offense.”

Which they could very well operably have… tho’ defense and rebounding are the 2 things that should never, go; cold!

Our handy-dandy friend the so-called Forum Guide of Graham Houston fame is calling for an in-conference ask back… as methinks we’ve never played: Franciscan University. Nor have we spanked them by 46.

The annualized year-to-date vitals say that… V.P.I. is up +6% in shooting percentage margin (nearly all on O, as St.Francis, is right there on overall floor D); the Gobblers however are up an insane +4o% in 3-point percentage margin (killing it on both O & D alike), and yet St.Francis is up a very useful looking +13 caroms in rebounding margin year-to-date. (Dang!)

Mark Flagg, Ramiir Dixon-Conover (who can transfer to VeeTee right now; this one is a keeper men), and Myles Thompson have combined to account for 49 percent of the team’s total scoring thus far this campaign. 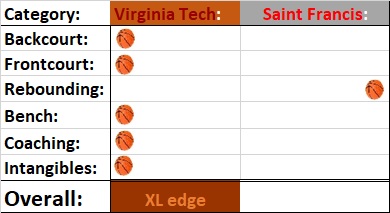 Whatever upsetting chances/odds Saint Francis does have… end/begin there.
As they need to land their A-game punch early, often, and late.

And frankly, those chances might just need a little Hokie Help.
That, and they prolly likewise need a starting career night and maybe a bench one too?

Even though all of my preseason wraps peg Saint Francis as NorthEastern Top-4 and most of ’em say they have at least an outside look at the League Title this campaign. Which is indeed more than I suspected here… this one seems a few bricks shy of Saint Francis load.

As Saint Francis has to win the tempo battle in spite of being the little guy and the {sic: bench} thinner guy at that. That means staying outta personal-foul trouble out on the A.c.c. road.

This does not seem likely to us.

The only Q is… does a blow-out seem likely to, you?