Today’s word of the day is… hyp·o·quit.

Baller Dino was born in Honolulu, grew up in San Diego, and attended the University of Hawaii at Manoa (1979–1983). A 1984 graduate of the University of Hawaii with a bachelor’s degree in education, Babers started at three different positions (OLb, Ss, and Rb) for the Warriors during his career, while earning Western Athletic Conference All-Academic honors. As a senior, he served as Hawaii’s special team’s captain and was the squad’s leading rusher. Dang!

Babers tried out for the BC Lions of the Canadian Football League before an injury in training camp ended his playing career. Ouch.

Babers began his coaching career as a graduate assistant at Hawaii in 1984. From there, Babers coached at numerous schools highlighted by offensive coordinator positions at both Arizona and aTm as well as an assistant head coach position with U.C.L.A. After four years as an assistant at Baylor, in 2011, Babers was named as the new head football coach at Eastern Illinois University to replace Bob Spoo. In two seasons at Eastern Illinois, the Panthers made the playoffs both times, led by quarterback Jimmy Garoppolo, who was a second-round pick in the 2o14 N.F.L. Draft.

Dino has won at both of his previous head coaching stops (Bowing Green M.A.C. titlist) and led Eastern Illinois into the playoffs each year. Finished 1st place in the conference every single season as the big whistle prior to the ‘Cuse. Amassing 5-Conference championship blings and mutually 5-different (tho’ not all Venn Diagram overlapping) Conference Coach of the Year awards for his troubles.

Nevertheless, up in Will’s “Jiffy-Pop Dome”… Coach Dino has fallen off mo’ than a bit…

…he did tear it up with 10-wins back in 2o18, tho’ he has also posted a L’ing rec’ in every single other Orangeman season to date. Going: a pretty unsavory looking 17-36 erstwhile to 2018 itself. There is mo’ than a few whispers that he needs this win. And frankly (see the pun), Dino is a sunset guy and as Will taught us likewise here… most coaches really drop after age=57. Twilighting in a young-man game is unforgiving just like dat.

The dino-saurus-sex, who received his master’s degree in education administration and supervision from Arizona State in 1987, and his wife, Susan, have four daughters
–Breeahnah, Tasha, Jazzmin, and Paris.

…and leasts we forgets… Dino enjoys beatin’-up on, us! 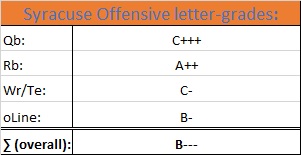 Syracuse is 126th Nationally in Net Punting; and curiously enough so is P1, James Williams. 6′1″, 215 lb. r-Freshman booter here. And the resume surely scholastically comes correct here… what with #2 (Rivals) Place-Kicker and no.4 (Kohl’s Kicking) Punter is about as VHT (very highly touted) as playing H.S. footsie gets. As this P1 can clearly double-dip as your K2 and that leaves you +1 as travel squad maths go. Anywho… Jimmy (who has been dinged-up; St.James Bless) was team Captain (as a specialist mind you) as a rising-Sr. in the ATL down in Ga. Where he won about everything you municipally and AAAAAAAA (ocho-A) can win kicking/punting wise in peach-state terms. The kicking camping vibes say Mr. Williams has legit range out into the FGA 60-yard marker. So, leg strength seems right as rain here. Did come up through something of a Kicking-Factory as his H.S. went… so, again, there has to be some legit leg-love here. Curiously, the P2 is the one with the one blocked punt this year here. As Jimmy’s punt-pocket is 100% D-1 clean thus far. He can KO in a pinch and he has launched two punts north of 58-yards already. Prolly the least experienced and possibly the most leg-talented P when he steps out onto the field each week this season. Check back in 2o24 and see if he is still P1 for Syracuse (or doing legwork on Sundays for someone else)?

K1 Andre Szmyt (6′2″, 210, r-Jr.) was a Unanimous All-American in 2o18, and he also won the Lou Groza Award as the alpha top-kick’ in the country that season. Rated: four stars (****) by Kohl’s Kicking coming outta high school. Coming into this season, he was 56-of-65 (86.15%) for his career as FGA’s go. Although down nearly ≅25% for this year. Which really makes you wonder if Mister Szmyt (Pole surname) is healthy? As he has sprayed misses in both directions and he’s just too good for that. On tape, ‘dre does use a cropped or truncated punch-kick style follow-through. (Like: Jan Stenerud of Kay-Cee Chief fame did). As Andre’s name is literally all-over the ‘cuse leg-game record book already.  SU Athletic Director’s Honor Roll selection does not .edu suck. Neither does having your u.grad’ (Psych’) already framed up on your athletic-dorm-room wall. Neither does his career leg-work out to 39-yards… as 46-makes against only 2-misses is great just like dat. Tho’ ‘dre does have range out to the mid-50’s, and he is 69% beyond 50. He just got a bit off-track WW2 style or in the forties. Go’ fig’ on dat?

‘cuse Special Teams letter-grade: methinks Syracuse to be better than this C+ letter-grade, tho’ hurting, slumping and a lack of returning all conspire to disagree.

Number of  Orange who could colour @Tech=1o

…the takeaway here is… ‘cuse followed a nominal-looking 5–7 campaign in 2o19 by posting its second one-win season since 1948! 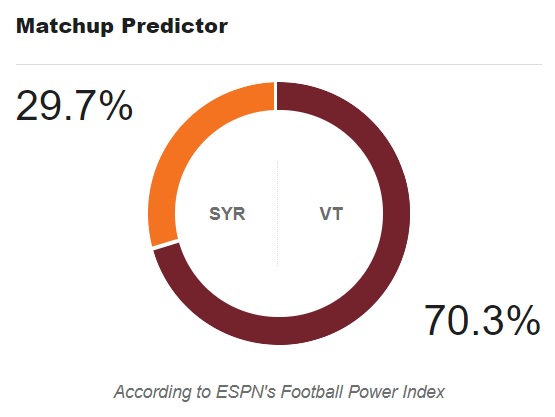 The pandemic cut into a pivotal offseason of installation after Babers hired two new coordinators last winter. And that’s harshing indeed… tho’ in theory they (and j.Ham) should be 1.5 seasons north of that by now.

Nevertheless, somebody has gotta be due to pop-clean here, right?!?

The starter=the finisher is my best take.
A Preakness Stake(s) contest.
As neither one is cardiac.

…with no word yet from Ranger Rick, the Panther, red-herrings, or Lassie barking at the mothership as I type.

That attempt at animal-crackers satire aside, still yet, there
is defensive match-up thingy(s) here that favor ‘cuse.
No joke.

#ChallangeA.c.c.epted… there are 1,440 minutes in a day and we are gonna have to pitch a complete 9-inning game or high 50’s in minutes here.

Syracuse (re)sourcing reports that the Orange locker-room vibe is at least a little peachy-keen, in that they feel that they are close to a breakthrough. Two straight Ls vs. two consecutive Ranked opponents; each by one ½-play apiece, one requiring sudden-death to settle the dead-heat mater, the other a very ‘near thing. Or, three straights by one-half-of-a-play. A 3/2’s trifecta burn if you will. Dang…

Over on the other sideline… that sharp thingy butt-poking po’ Fu’s proverbial hot-seat is what some deigned to call a: “crisis-point”. The Hokies are 22-21 in their past 43 games since 2018; and have precisely one single solitary win to sh0w for their last 43-days of, work!

3-game splits,
…the one prime-mover here was the ball-breakers down low.
As ‘cuse is rushing a bit better of late and V.Tech is defensing the rush a bit less better of late.

…nearly an aggregate net gain of +fiddy (5o) ypg in Syracuse’s favor.
(Or ≈5-points, which could prove cosmic in a single-play game).

H/A splits,
…’cuse not only runs a bit better on the road, they pass less or run mo’ if you visiting Game of Planning will. A r-Nixon set of Road Warriors. The Orange traveling D however does soften a bit in run-defense itself.

(Might: be a slight lifeline here if we get our ground crew on track).

Round–Robin:
Our handy dandy friend, the so-called: Forum Guide of Graham Houston fame is merely… calling for a very soon ask back.

…IF, if Fu’s culture does not get all chinny when chin-checked by the obviously oncoming Syracuse ground-game traffic?

This is jus’ the kinda game that is right in much-maligned Justin’s wheelhouse. Penalties, R&R, Turnovers, and Special-Teams generated: hidden-yardage all favor Fu’ here.

Here in the sportlight…
You have to wonder which Syracuse team shows up?

The A+++ punch Syracuse team is prolly a Bridge Too Far for po’ Fu’. Although the C letter-grade version or any lessor caliber ‘cuse Fu’ should be able to 3-hour stomachache just sick. I mean just… nick.

PLANDEMIC:
…or in other words… this one is all about Syracuse.

One hot-seat will ball, the other will warm prior to the… fall.
A 1-armed-akimbo with the other arm tied behind a jet-sweep out in the… flat?