Virginia Tech football… seems to be, is trying to, and yet still may or may not actually open for September business in close to a few fortnights worth of weeks.

The Hokies and the Atlantic Coast Conference are at least trying to ‘push through’, get there— and yet only Coach God knows how that one will go. Nevertheless, and in the meantime… we can dabble in one tactical (Running-Backs) and a few strategic or program vectoring topics (ex. Recruiting). And see if we can figure out where we are going from where we have recently just been. So, without any further adieu, here is the backfield mixer and the middle third of what is now gonna be a three-part R.A.T.T. Virginia Tech statistical analysis and insider whisper driven recruiting overview! Thanks at readers, Stay Safe | Pray Safe!

Deepest Rb cadre set since the last set of true-blue O&M Hite era Stallions. Now, this 2020 Fu’fensive Rb crew may or may not be as top-heavy elite as super-alpha Rb’s go— or like say 2009 (Williams + Wilson with Qb1 T-mobile keepers) went…

Although, it might just enjoy more overall tradecraft variety as competing/complementing skillsets go. And we have our deepest oLine prolly going back to the Nebraska coach Grimey Orange Bowl crew. That, and we may just be poised to field our alpha starting oLine- since DeChris, Nosal, Lanier, Brooks, and Miller, all final campaign matriculated under C.News’.

And some say our most talented offensive baller overall could just be our Rb2 (Blackshear, eligibility pending). With fellow incoming transfer (Herbert) poised to get the better day-to-day or fulltime worker-bee starting nod at Rb1. Plus a returning King, Holston, and a handoff receiver sleeper pick in Gray. All of this with pretty dang close to running a full-fledged déca’ or 10-deep upfront on the Vice Squad (where downhill blocking or run-fits are indeed north of our passing-cup: (checking in at a very so-so looking 74th 2019 best). AND… with not less than three, that’s (3) Qb’s, all of whom are more than entirely capable of running any spread-set Veer elements or being completely (see the pun?) literate in their Read-Option fits… and guess what my fellow Techmen?

We really should improve off of our entirely decent looking 49th best rushing-O national attack; which was still solid enough for 5th best in A.c.c. ground-gaining work.

Did I mention that we will still be sallying forth in the All Charmin Conference, yet?

So, there is all of ^that^. We have at least 2-3 options both internally and to the edge. We have another 2-3 guys (counting Rb’s ➕ Qb’s here) that are pretty well versatile enough to hit plunge plays, off-tackles, outside-zones. Then mix in East-West slickster Wr’s Turner and Robinson; who could very well ‘kick rocks’ on horizontal stretch elements for in excess of more than 363-yards this year.

And did I mention the always namby-pamby shock-troop inviting All Charmin Conference, yet?

Eye found… that basically 300 or more total accumulating nationalized class rank recruiting points is necessary to punch that quad-playoff ticket. Last year incoincidentally enough, four teams busted that tricentennial mass. And the 5th team (295-points) was actually your fourth-place quad-play-off qualifier. So, it’s pretty much is a tricentennial or 300-point quad-playoff barrier; or you are second-tier and working for a traditional New Years’ day caliber of Bowl Game. As the old-school (circa: 1966 founded) 700 Club may be gone, although the D-1 300 recruiting point club is likely quad-payoff cover-charge elitist here to stay.

After the 300-point barrier, we see a pretty tight looking grouping/clustering of second-tier 290s to virtual 250’s recruiting point squads that likewise inconidicentally enough, pretty much define your Top-20 D-1 football teams. With a p=.9 or a virtual ninety-percent chance (90%) year-in and year-out. (p=probability in stats).

After that, you can still be pretty good to kinda good on a 240-210-point recruiting diet, although the p (probability) of winning in Top-30 terms decreases to p=.86. As variability and the need for good-breaks and great-health or an epic Kicker begins to rear its final countdown W/L outcome head here.

As there is no mo’ 200-point recruiting tallying teams once you cross the 35th in the nation recruiting barrier. As the diff between 36th and 66th was only approximately 30-recruiting points. For comparison’s sake… the diff between 1st best and a mere 6th best in the recruiting nation was nearly the same 30-point delta (Δ). For further comparison’s sake… the diff’ between 1st and 30th place itself was a staggering and seemingly insurmountable virtual 100-point delta (Δ) bang right on the chin!

Do you see what I mean here gents?

Because what I mean is… once you cross or drop southward of the 35th in the nation recruiting total point barrier, you had better be coaching (the verb) your Noll raised to the Landry power ass off!

Seriously… as you are right on the barrier of even Lombardi -esque coaching the verb could only do so upward bound much.

And you’d prolly need to r-shirt and every 4th/5th year matriculate a {sic: Coach} Chris Coleman savvy upperclassman heavy squad. With Good to Great health and likewise with a four-leaf-clover or longshot quad-playoff end-game breaks. And that is just to have a sporting 10-point underdog @home chance to A+++ game punch with a visiting ‘Bama, or Clemson or L.s.u. inside of Lane when your team is once or twice a decade peaking.

Now, once we cross the 57th Winning Percentage barrier, and finish with marking positive records (i.e. we are fishing not catching >.5oo teams) —recruiting really begins to muddy the Duck Pond waters as you are comparing bruised oranges to wilted tangerines. As outcome variability itself is a very very very narrow thing in Talent terms at this stage. (i.e. Eye found the separation or distinction here to be statistically blurry at best and myopic at worst) 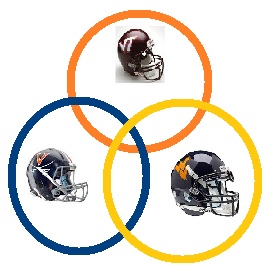 And once you cross the ~65th barrier in recruiting… you have to descend another staggering 50+ spots all the way down to a 117th in national recruiting rankings to cover the very same 30-point delta (Δ) or change in total recruiting points ranking!!! Giving new meaning to coach William Wallace’s: “…squabbling for the scraps from Longshank’s table” in spades.

As no matter which clustering technique I choose here, it is hard to separate this much Venn Diagram overlapping between so-so to south of so-so teams.

Now, guess where we just were (in 2020 national recruiting terms)?

Now, we are a bit better in 2021 national recruiting terms— even sans the laughably bogus VT2TX Qb1 and Wr1 decommits…

However, wvu is currently a sporty enough 32nd in the nation; and hooVa is an even sportier 26th in the whole D-1 shebang.

Does that rivalry square with any of you?

’cause that’s a rhomboid of round-peg square-hole insert hemorrhoid here to me.

Although at least we do have: (per Norm Wood): per Fu’: “We have players committed that nobody knows about, and we’re in it on a bunch more. So, I couldn’t be more excited.” —Coach Fu’

(thx @khakiblue for finding ^that^ for me!)

Now, and although I cannot speak for you… if you ask me -and you did via reading these very words- well me and my committee of one? Well, we are starting to get pretty Fu’ contractual (2023 final season) outcome anxietized at the moment.

As in pretty dang talent (or national recruiting-point ranking) anxietized regarding where we will: 2022-2024 outcome W’s & L’s R.A.T.T. be?

Or in other words… unless we do have a high-octane rocket baller who can individually conduct 2022-2024 and yell: “all abroad”?

Where do we go from, here?
(Tell me in the FREE space down below)

The college football Rich get… richer!

Notice the accruing of true D-1/P-5 recruiting wealth! As we now have not less than 15-teams with half of their recruiting classes listed as Blue-Chip-Ratio qualifiers!

2018 saw Ohio State break the seal and enter into that super-elite three-quarters of a recruiting class chip status.

Accordingly… we are seeing a legit 1:1 or 100% correlation here too… as so far you have to tally >50% Blue-Chip-Recruits (B.C.R.’s) to win an MNC in the last decade! The next best tier of 40% blue-chip-ratio schools (two schools in total) did not even get you close.

Yes, sports fans… the NC2A tax-bracketology is escalating.
The cost of doing business vs. the D-1 Armani suits is going way-way up.
And yet if you are Blessed to be numbered among the D-1 elites? Business is not just great.

Business is bull-of-da-woods boomin’! All-time pigskin commerce in point of fact.
And this is now gonna be one freaky hard blue-chip-ratio ceiling to crack.

Ergo, therefore, to Whit, go on and chamberlain (or treasure) your 10-win memories folks.

As the D-1 macroenvironment has truly… ¢hanged.

Or to put it most sussciently… you do NOT wanna cross that Top-35 national college football recruiting barrier if you fancy yourself elite.

As that is one slippery-(negative)-slope that will only become #HardToughSuck to surmount in the Quad-payoff and in the P5-conference TV contract revenue $treams flood plain era.

^that’s^ the problem folks… and as we all know to do no more than to present a problem and walk-away is the Ellison Omega (Ε, Ω; or easily offended) butthurt realm of having done nothing better than to… complain.

Complaints or problems must be married to solutions… and from where I come from?
There are a few pliable and (hopefully) R.A.T.T. 24060 solutions to employ here…

Because ontologically speaking, although the relationship between Fu’ and the more urban recruiting environments has not been outright abusive, it has been outright obtusive at best.

And botching to the point of lowering at worst.

That however is a matter for part three.
Coach God wiling…