This  after coming back from down seven points at the intermission of A.c.c. game#1 (for us) vs. the Hail Mary Les Hanson looking Dec’s right at the halftime buzzer. That being said, things do not get much easier with the always yesteryear Big East sizey and defensively starchy Florida State Seminoles on tap Thursday night at 7pm in Atlantic Coast post-season play. The 2016-2017 Seminoles are a shinny looking second seed in the A.c.c. checking in at 24 up and a mere seven down and at (12-6) in intra-league runs thus far on the year. Although these Sem’s can score the rock unlike previously defensively enhanced and yet offensively needy additions. And in case you had not heard, Florida State is towering; I mean big, bigger, biggest, making this a mightily tall order for coach Buzz and orange and maroon company down in the NYC Brooklyn borough paint. Did I mention the F.s.u. frontcourt size yet; and who will A.c.c. third-round win? Read on to find, out…

Baller Hamilton played college basketball at the University of Tennessee at Martin. After this Leo’ went into coaching and won the 1978 NCAA Championship under old-school Coach Joe B. Hall at Kentucky.

Coach Hamilton  is a two-time A.c.c. Coach of the Year (2oo9, 2o12) and he is also the is the first coach to be named coach of the year in both the Big East (Miami Hurricane, 1995, 1999), and the A.c.c. His teams have qualified for seven NCAA tournaments and eight N.I.T.’s. He was the old-school U.P.I. National Coach of the Year in 1995 for da U; and he has won two conference championships (1 B.E., 1 A.c.c.). Leo’ is the winningest Coach in Florida State History (27o wins) and the 8th all-Time winningest Coach in A.c.c. History (27o wins). He also coached one season for the Washington Bullet’s, though was un-retained by #45 M.J. himself. Leo -a Master’s degree holder his ownself- is an ace coach in the FSU.edu and former classrooms as more than 94%t of his players have earned their degrees. Bravo Leo! And the Coach Hamilton coaching tree has already sired eight other D-1 men’s head coaches. Very Pat Riley ‘esque; as Coach Hamilton teams’ have enjoyed a stinging defensive rep’ for many years.

Even bigger would be the back-up C, 7’4” 233 lb. N’Djamena, Chad native and t-Soph. year Christ Koumadje. Yes, that is his first name and no, I’m not making that up. Koumadje drops 3.4 ppg with 1.9 rpg, on 67% shooting while leading the ‘noles with 1.1 bpg in very limited minutes. This with a stress-fractured left-leg once he got to State’s campus after going 59-1 with a stellar .983 winning percentage in high school- along the way to winning the 2015 high school national championship (Montverde Academy, Florida). Koumadje is raw, he is huge and if he ever gets any semblance of offensive acumen to his exalted Roy Brown game? He’s a Pro’ on rim protecting metrics alone, not if, when. (UPDATE: ↓ down vote here as well)

6’5”, 215 lb. nugget (first year) Trent Forrest logs the most substitute minutes for coach Hamilton and he nets you 5.4 ppg with 2.9 rpg on 49 slashing percent from a driving Two-G who needs to work on his 12.% range from back. The book says Trent is a passing 2-Guard who is a weapon in transition; 47th ranked outta high school to boot. (UPDATE: truly down ↓ here)

Jarquez Smith is a 6’9” 236 lb. final year thumper at P/F. Smitty scores 4.7 ppg to go with 3.5 rpg and is basically an impoverished man’s Maurice Lucas as an enforcing 1 bpg defender down-low. And yes, back-up P/F Mfiondu Kabengele is Dikembe Mutombo’s nephew. (UPDATE: this is the only ‘Nole to actually move ↑ in the A.c.c. meantime)

the takeaway:
“The takeaway here is… this is a bad, badder, worst, match-up in frontcourt terms on proverbial and theoretical O&M paper alike.” 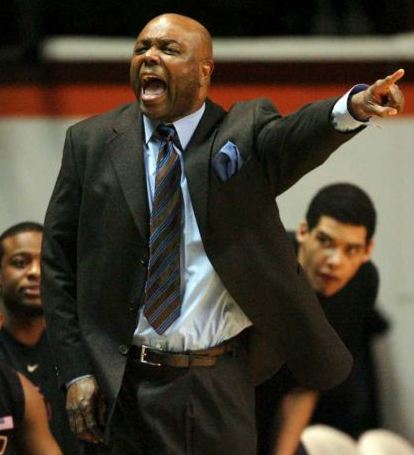 Has some court-side, pop!

“As Florida State is ginormous and the little O&M engine that could just became the small, smaller, smallest frontcourt compact Geo’ team in the whole darn A.c.c. Seriously, F.S.U. is a macro low-post team and coach Buzz and company are pretty mirco at least in power conference contemporary line-up terms.”

That’s what I opined two months two days ago and none of that has changed; less the Clarke injury (Godspeed); which makes this match-up down-low in the paint even worse than it already was.

That being science-fact, objectively and measurably rightfully said, let us ask our pet metrics what they have to say before we go synthesizing the OPT cart out in front of the OPT horse; yet again…

If you read the italicized updates, and if you dared to look back and compare… you would see that only the Blocks metric for Florida State basketball moved, well, forward (pardon the sporting pun) since we saw State last. As beyond a betterment in swats, everything has tailed off a bit or flat out gone in reverse for F.s.u. Nevertheless, now recall that we/Virginia Tech basketball got beat by -a presumably better (than now)- Florida State hoops club 78-93 out on the road back in early January.

However, as the quietly epic Steve McQueen movie: The Sand Pebbles teaches us, there are two types of steam: “strooooong steam and bad steam” and you have to wonder just how much steam a very short Hokie playing rotation has left? As the O&M star’s just logged the following minutes/vitals…

As Coach Buzz and company went with a downright truncated rotation and a very short two-man bench that saw only one sub’ log more than 15% of the opening round contest!

On the other hand, it sure seemed to me like our (outsider) shooters finally riffled their sights in just right as sharp-shooters with vastly crisper ball-rotation from range in the final 20 minutes of play. That plus the rather heretofore -although statistically detectable- Florida State sag in the last couple of weeks gives us hope. Despite what is a down right towering bad, badder, baddest match-up in the lane that is all in favor of the raiding-party from Tallahassee Florida. As this is easily the deepest playing rotation we will see all year; with a stunning 12 different ‘Noles log nine minutes or more of playing time per game!

So either way this one is all about Virginia Tech as Florida State is a bigger and slower hoops team and we are the one who has actually improved in the last few weeks of hardwood play.

Though who will have the steam come 10pm Thursday night?

the skinny…
So, in short, what someone has found is… the whispers hint that Isaac of F.s.u. may be a bit dinged up as his play has been off of late; though is break may be just what he needed as well. J.Rob’ has a hurting right-ankle (class II) and will try to give it a go —which seemed more questionable than probable to me. S.Allen moved better as the game moved along and his loosened up a bit with a smarter second-half. Robinson’s is the fresher and even the more severe (ankle-roll); and none of that helps any version of matching-up vs. State. (and it is very odd to me that we took our practices to a local/neighboring college and not inside the Barclay’s Center —no wonder we shot better in the second-half; anywho….)

the closer…
Well, I was rather toying with this upset pick, as methinks me likes the speed, quickness and just general high level swag’ of Virginia Tech vs. a Florida State hoops squad whose sense of regular season closure left something to be, desired. Ditto the whispers of coach Hamilton that raised a clinical (or chemical) flag that something is off, or even ‘rong at F.s.u. when you are talking about the NCAA’s even before the 2017 docket ends –and before your very own rather prestigious league tourney begins. Also liked the quiet, focused, determination Buzz’s bunch showed prepping for Wake Forest up there. They were traveling for business, not pleasure.

That being said, coach Buzz and company just look too lame to me, as their margin of error is slimmer with every ankle roll; and none. As in there is no room for error at this level with such a truncated and now a 28% lame playing rotations. That’s too much vs. too much depth from Florida State. As the greater numbers of legs and the fresher legs at that; have more, steam…