Just ask their now officially fighting for post-season birthing overall tally of 19 up and 12 down.

Now ask their 10th best in the A.c.c. and negative intra-league mark of 9-10 how all that post-season slotting does or does not shake out.

As these ‘noles were picked middle of the pack or about 6th or so in the A.c.c. by most pre-season magazines.

Or in other words… 11th A.c.c. seeded Florida State can nil afford an L in this one. And perhaps the same can be said of higher, 7th A.c.c. seated beloved Virginia Tech.

As Florida State does a lotta things average to good, and these 2015-2016 hooping ‘noles do nothing poorly at all. As their lowest national ranking in the 32 men’s D-1 basketball metrics that I track is a mere 242nd best (in turnovers).

Read on to find out…

the takeaway:
The takeaway here is… that this is the Atlantic Coast Conference men’s Tournament championship, where anything and everything can, and prolly will, happen.

Virginia Tech enters this one feeling absolutely no pain, streaking, and on a big Mo’ (momentum) roll; as possibly the hottest team in the A.c.c. Maybe even the one team that nobody wants to early-round play.

Florida State just blew out nearly helpless Boston College 88-66 in round #1 on Tuesday afternoon in a curb-stomping that was not even that close. This after a five game snide and then a two game win-streak to close the Seminole regular season. As you would be full-court pressed to say that Virginia Tech does not merit the recent play check-mark here.

Still yet, F.s.u. has a very nubile and a very talented backcourt in Atlantic Division tow. As he who lives by the outside shooting sword can die by the same. As you never know how distance based perimeter guys will go from game-to-game. Though I do know that they just went off with a positively solar-flare ‘esque 59% overall and 56% from range! Beasley and Bacon were both okay to nearly good in game#1, and yet the Seminole bench (45 points) was simply phenomenal! Or in other words, I’d be recalcitrant to publish that I’m counting on either trend repeating itself in A.c.c. game#2. As this was the best bench game for the ‘Noles all year. Whereas Beasley and Bacon and a one for the game afternoon from Xavier can all three play better to boot.

Coach Buzz and Virginia Tech do have the fresher legs ~ +4 in rest. They should enjoy a scouting advantage as I doubt they prepped much for entirely lowly Bee.Cee in the last 100 hours.

That being said, I’m one of the few, perhaps of the only (one), to wish we had played in round#1. An easier match-up, a greater likelihood of winning, and I did NOT wanna see peaking Virginia Tech rest-up then rust-up and cool off any, not even one iota. Because when you are playing Buster Poindexter basketball, and feeling “hot hot hot”, you wanna keep playing Buster Poindexter basketball –A.S.A.P. Feed that hot-hand; as the next game can not start soon enough!

The closer:
The most recent 5-game splits are pretty damn close on Offense… as with the exception of 3-point shooing; how do you parse these two? 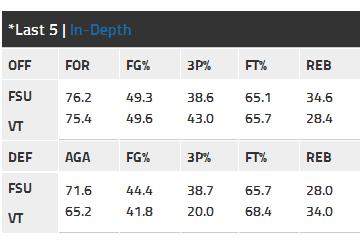 And when you crunch the aggregate numbers in terms of Marginal determinations, you find out the following two things in a hurry…

Coach Buzz and company are close to 23% better overall from 3-point land! And yet Florida State does industrialize a nearly 12 board edge in Rebounding Margin. That’s a pretty heavy metric when defense and rebounding should never ever go effort-driven Tournament cold. Whereas shooting is always open to having an off night.

Or in other words, can F.s.u. rebound and low-post their way to a win with an inexperienced albeit very talented backcourt? Or, will Virginia Tech continue it’s streaky backcourt through Wing play and employ just enough defense to win? As this one has: “close one”, written all over it. As this is a need-game for both schools post-season chances in a game I damn near called “Even” in summary in the match-up chart up above. Pretty much a fiddy-fiddy rock paper scissors flavored game. Flip a coin, and if you do not like the result flip it 2 outta 3.  Only thing is …this one is one-n-done. As one teams A.c.c. season strikes 12 at midnight on Wednesday night.

Florida State has its best scoring offense on its hands since I last lived in Foxridge Apartment’s over 26 years ago. And you’d have to think they are in sync and feeling their flow after routing Boston College after so many arrows both near and far found their late Tuesday afternoon mark. Our handy-dandy friend the so-called Forum Guide is predicting the  narrowest 1 point Hokie victory between these two evenly matched teams.

That seems about right to me, as I have this one pegged as a single full shot (3-pointer) outcome or less, either way. As one single solitary shot will decide this one, and this one will not be decided until the very end.