Florida State is 13 up and 8 down on the year; and yet a pretty dang nifty 7-2 at home in Tallahassee.  Virginia Tech is 1 for the year as the visitor and riding an o for 2014 L streak into tonight’s cross-Divisional Atlantic Coast match-up.

Although Florida State has dropped 4 of their last 5 for a reason; as this is not quite your momm’a F.S.U. defensive juggernaut hoops club as well. Though make no mistake, it is pretty dang close, just a little smaller upfront and a bit beat-up all around.

p.s. F.S.U.’s third 7’ warhorse (Kyle Turpin; no relation) is out for the year with chronic knee issues; so as big and nasty big at that, as Coach Hamilton’s crew is, they could easily be even larger; and this guy was the starting C last campaign 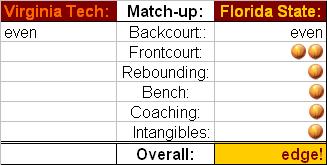 Jarquez Smith, Michael Ojo, Aaron Thomas, a Forward, a Center and a G off the F.s.u. pine are a pretty balanced substituted rotation to me.

Illation, conclusion (s) and OPT digits:
Florida State is a bigger hoops team than I had thought on film, and they are less athletic than they once were as well. A bit plodding in their rotations at times; though so much north-south skyscraping verticality tends to work out just like that. Eight best in FG-percentage defense allowed (@ 37.9%) says so!

This team also ambushed me by being 47th best in FG-percentage from the floor (47.2% overall). That’s not a traditional Hamilton team either; not so far as history teaches us anywho. And yet there is still something very Georgetown about F.S.U. As the ‘noles still employ the industry of legitimate 7’ plus dinosaurs otherwise known as true-Centers down in the post. That may be a bit Big East of them, though it damn sure is a touch A.c.c. match-up for coach J’s and Vah.Tech.

Our handy-dandy friend the so-called Forum Guide is only (so to speak) only predicting a 10.5 point Seminole victory in this one folks. And yet VT averages 55 away points per game on 38% shooting and F.s.u. allows 38% shooting at home. I’d call that ominous indeed; as try as I might; I could not synthesize a credible reason to pick Virginia Tech for the upset in this one.