Today’s word of the day is… dickens.

Coach Cuttclife has only won the: 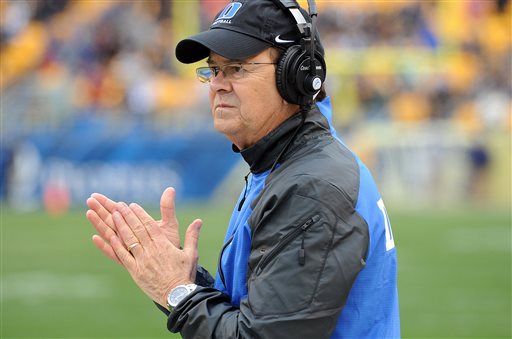 As most of their records’ are actually his (coach DC’s).  Pre-coach Cutcliffe broke in and ran The Tide’s athletic dorms for “the Bear” at Alabama! Coach David has a National Title ring from Tennessee. And at Duke he only ended an 18 year bowl drought and likewise brought the Victory Bell (vs. rival U.n.c.) back to Raleigh-Durham. Then he logged Duke’s first ever double-digit (10) win season in Duke’s gridiron history.

David is married to Karen Cutcliffe. They have four children: Marcus, Chris, Katie, and Emily and five grandsons.

Duke Special Teams: (1.5 returns)
Duke is only 97th best in Net Punting and that could translate into some sweet hidden-field position if this one devolves into a hunting/gathering defensive scrum. P, Parker Austin is a 6’1”, 190 lb. r-soph who has rushed twice and attempted a pass already going two for three on converted fake-punts thus far! He was the starting Duke P last year although a snapped clavicle (collarbone) kyboshed all of that (Godspeed). He has had one career punt snuffed out with a long of 68 yards. He was the no.8 P in America according to 247. And as a high school senior Qb he completed 63-of-134 passes for 1,148 yards and nine TD’s. So yah; you can see what the trickeration is born of here.

FG-Kicker Austin Parker  is a 6’1”, 190 lb. r-soph. who is 25 of 26 on P.A.T.’s and yet 11 of 15 (73%) on his FG-attempts; with a long of 45. Or 85% when he’s not getting his FGA’s blocked. Austin has decent although less than bionic FG kicking strength and seems reliable enough out into the very low 40’s give/take. Mummy Austin is only the So.Carolina career leader in blocks for wimminz hoops and daddy Austin only punted professional as a Gamecock for the Denver Broncos. Yes I’d be willing to say this sporting Human Genome Project counts.

Special Teams letter-grade: if not for those two blocked FGA’s this is a pretty pretty final grade, nonetheless, I’ll go good for a low B+ as is.

The takeaway here is… Duke has gone 4 up every bit as much as Duke then went 4 down on quad streaks in each direction leaving Duke a .5oo ball-club at the moment.

However; when you dig closer the most recent three Duke L’s were all by one full-play (i.e. seven points) apiece. As this Duke football team is not all that far removed from 6-2 or thereabouts. So Duke is better than their latent record shows; the only real calculus you need apply is… by just how much?

the skinny…
I said this last week, did I not? “Run the damn ball!” As one of the things I left outta my much-viewed U.n.c. Tech Thoughts (God Bless you readers); was that I’ve noticed something disturbing about the Fu’fense. Though to give a little room here would be to say… maybe this nag’ is a necessary evil inherit to the construct that is the Fu’fense itself? (i.e. maybe the Fu’fense can not do work any other way or with any other play-mix?)

Though one of the things I’ve noticed, in 21 games of Fu’fencing right along… is that coach-Fu’ (and/or Corny) have ignored elevated rushing opportunities to maintain their intrinsic run:pass mix. Even when encountering statistically and film-study rather inviting front-7 user-friendly opponents.

Or all that to say that the Fu’fense is rather inflexibly narcissistic on their throw sets. Now maybe Fu’ and Corny would say -or even argue- that a little more than a 40/60 split is necessary to make the Fu’fense go. i.e. each hand feeds as opposed to bites the other.

Perhaps they are even correct… still yet; how much money would you have bet on the matrix being exactly the same with what we just departed from 2016? I neither; so I’ll say it a third time… “run the damn, ball!”

The call…
…so why am I saying “run the damn ball” vs. the 40th best trench fighters in all the land you ask?

Well I’m saying it because Duke has had a Dickens of a time in stopping the run of late. Check it out… in their “best of times” first four games Duke out-gained their opponents by virtually exactly 8oo total yards overall and by a downright enforcing +62o on the ground; all while opening up 4-zip. However, in their most recent “worst of times” four game schneid Duke stands in at just immediately over –35o overall and yet a mauled looking –33o deficit on the ground!