Virginia Tech football opened up an entire gross, not a can, not a case, an entire 144 count or 12 dozen cans of vacuum packed Commonwealth Cup whoop-ass upside of the dweeby booHoos head on Saturday afternoon down in the New River Valley.

The Hokies beat the damn breaks off of the university of virginia and if anything -and if this is actually possible- the Hokies beat uva worse than the final score showed. As Tech beat uva’s ass so hard and so long that I almost felt sorry for them; well; almost. As Mendenhall and company have shards to pick up after such a shattering total beat down curb-stomping defeat. Virginia Tech meanwhile resumes its rightful place in the Atlantic Coast Conference football championship game down in Orlando Florida vs. Clemson; whereas the cavaliers are left waiting on chess season or holiday zima 2.16 packs or whatever makes them feel sham important …after such an impotent day. As the Commonwealth gridiron gap has not felt this gaping in quite some time.

1Q 14:41 remaining:
I don’t care hoo you are, that’s just one helluva a blocking cup and a very manly push off the LOS (line-of-scrimmage) proper with one helluva a kid (Sam) going senior day 100 yard rushing battering-ram behind all of that.

And make no mistake here; it is very unusual -almost to the point of being unique- to get this kinda push this early in a contest, a carnivorous push, in a word.

1Q 2:54 remaining:
Scary looking play for the improving and yet still somewhat maligned Tuaman here. Watch the top of your screen as he catches the top of his foot and then gets blocked in the back (un-flagged) for bad measure. As this one had the dangerous Lisfranc left foot-tear written all over it. Shew, and thank Coach God, as Andrew seemed okay; although he got stolen big time here.

2Q 14:50 remaining:
Ahhhhh, okay, I’ll bite… why does the uva punter have neon yellow space-cadet shoes on; since she is special? Because everyone tells her how: “pretty” and “beautiful” she is on fb.com?!? I really wish someone would have lit #3o truly up for dressing out like this. Oui, you are special, and you deserve to get especially hit for this. 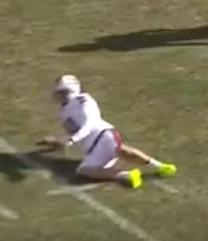 2Q 10:52 remaining:
The pic is here, as this one is just cut-off by the top of the screen, though I.Ford comes up limping (ankle that could have popped the knee) on his left-side after making a hard Flag-Pattern cut to the outside and is thereby escorted off the field by the Tech medical staff with a considerable limp while being almost on his tip-toes as weight distribution goes.

2Q 6:55 remaining:
Poor Faycson with the always delicate looking cervical neck-stinger on the nice open field stop on “smoke” as Mizelle does have some game; when he decides he actually wants to show it. Godspeed @31; as you never like the look of this.

2Q 1:11 remaining:
The U.S. Naval Academy, Roger Staubach and myself all LOVING on this original-school jump-pass, off the play action to, Sam; then complete to the same. Don’t see this one hardly any more at all. Brilliant, forgotten and simply play that virtually always catches defenders ZZZZZZZ at the wheel.

(intermission: whispers say that Tuaman has a bum left-shoulder, he had to be harnessed up; may need some post-season, work)

3Q 12:44 remaining:
Speaking of ‘Tua, although I can’t tell you he can physically punk a G-c-G wedge-block… as that is the realm of publicative liars, and as well all know… lying is for rugs. As much as I can not rightfully tell you that; you can not rightfully tell me that ‘Tuaman does not have a nose for the ball and in particular the Turning-over of the same. 10 career passes defended, seven passes broken up, three career INT’s, five forced fumbles and four recovered fumbles, with 21 TFL (tackles for a loss), eight sacks with a downright astonishing 24 huge total points scored says so! Just staggering stats to the point of being unheard of; from a guy who just can not shed a block to save his life… n’est-ce pas? (mid.script. you can also ask 3Q 6:52 remaining, if you need further scoring evidence…)

3Q 12:24 remaining:
Watch #21, a total sporting sissy of uva, come running up and try to steal big ole Jon McLaughlin at the end of the Sam Rogers plunge play off-Tackle to the right. As girlfriend managed to budge big Jon’ about 1” give/take. Size matters boys and #21 is about as catty as you can get.

4Q duration remaining:
Did see Huselkamp spell ‘Tua for three unscripted plays for an equipment adjustment (left-shoulder on ‘Tua’s now slung shoulder harness). D.J. Reid ran well enough; behind a lotta Swiss (or neutral) blocking grades as there is a very discernible drop off in our straight ahead N-S drive blocking from the Vice-squad 1’s to the back-up or caddying 2’s.

Really liked the fake Motley Qb draw last-sec’ jump-pass to McMillian for a major (or 6 points). Really liked the Wingback (or Slot for us) read-option look from Motley; almost something of a triple-option and something coach-Fu’ elected to show in the waning uva minutes; for a Clemson tell next week? (presumably he and Corny wanted Klempson to see this, trickeration off the same anyone…) 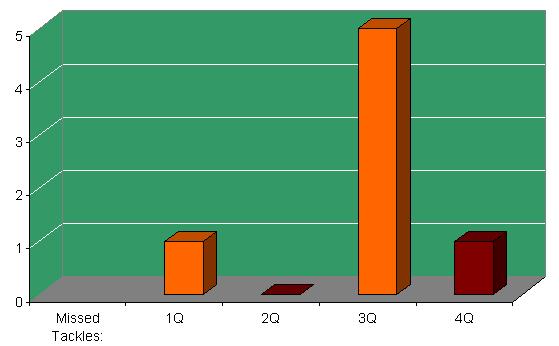 Because uva did not defense much of anything; seriously; I’m not joking here; as this was one feckless looking hooVa crew. Not much fight, not much kick, not much bite. Not even many sleepover hair pulls -and we expect, even hope for that, from girls- not much of anything. Marooning this as a true dullard of a Time To Throw section.

As I can only point out a few rather narrow narrative things. Why you ask? Because Bud Stout did not show much upon breaking tape –why you further query and inquire? Because Bud Stout did not have to show much to beat punch-less uva upon breaking tape. Gone were the elevating (vertical) rolls of coverage we saw less than a fortnight ago to bait-n-switch Notre Dame. As we played about as vanilla of a rivalry game defensive set(s) as you could ever hope to see schematically speaking; because besides N.f.l. auditioning “smoke”, hoo else did much of anything for the uva O? Was it the 40% passing Qb? No, twas not him; how about the even better starting 34% passing Qb? No, he was not much better; and in point of fact he was actually, worse.

That being rightfully said, someone’s sources say the ‘Tuaman was only defending his social media reputation after being bullied a bit online all year (by pear shaped and downright lumpy or soon to be: “Biff” upturned va.edu nose, he may drown if it rains looking #5o), And oui-oui on you fifty, as Hokie deeds are still >>> than booHoo words.

On the good defensing side, the Eye did spy big ole rotund Nigel Williams moving noticeably better than he did when he gimped a few series out last week up at South Bend. As Nigel was even back to playing downright disruptive at times, as you should bet the over on the Bowl Game damage #8 is gonna do courtesy of 4 bonus weeks off from trenching fighting on an ~85% or so left-ankle; as he looked pretty close to returning to his brow beating September forum here. Or in other words, as any old-schooler will tell yah: “he’s learned to play on it” or rather on what’s left of it.

Ken had a sharp day as he is getting closer and closer to being 90-100% back in his own right as his pec’ tear goes. Mook and Adonis both supported the run physically enough, and Alexander even shut a mouthy uva Wideout down along our bench in the 3Q with mere, words. Faycson had his best breaking on the ball coverage day and seems to be moving better -less self protective- of late in vertical terms. Nine Hokie TFL (tackles for a loss) inflicted butters a lot of Owens Dining Hall bread –and other than that, what more do you R.A.T.T. gleam vs. a team that did not much bother to even give it that good old sporting college try? 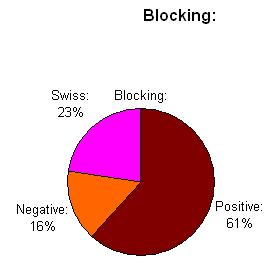 Virginia Tech football won the Lo.FM going away and nearly won the Qb harassment based TTT metric above by nearly the same. However as you can see below, Evans went a solid 59% on the day and yet he could have gone 85% and it just might take that kind of “wow” factor day to upset reigning A.c.c. titlist Clemson; as uva gave us not much better than a a glorified scrimmage look last Saturday afternoon.

To be direct here, besides a wet-Willie from #21, the other 10 uva defenders took the day off. Less one nice inside hesitation move from the uva right-De, -which did catch Nijman lulled to sleep by the overall dullness of the afternoon- the maginot line managed to generate 9′ in reverse on negative stops vs. the seemingly improving Vice-squad on the day. Or in other words, one can not be too sure if the Vice-squad was that much better -or even downright improved- or if uva merely let go the rope and then let the bigger, stronger, more sexually dominate Techmen go Spaniards and Mexicans on the whole shebang.

Evans mercifully took his low count in contacts in over 1.5 months and you’d have to think he’ll be a bit fresher for Clemson for it. There was a D.J. “downhill” Reid sighting at Tb in the second half and virtually double-nickels (54, actually) in rushing in just under 15 minutes of play is pretty dang good churning on a per minute or P.T. basis, if you can get it. And to take that a pun intended step further, no less than six different Hokie ball carriers averaging 6.0 yards or more per rush… which is what the ghost of Jerry, then Frank and now coach-Fu’ have always dreamed of. As uva looked less fast-twitch, less athletic, less raw athlete 7-5-7 talented; and even though CeeLo, –I mean coach Mike may be gone, London’s end game Tidewater recruiting malaise left its bogus calling (card) right here.

Ergo, therefore to wit, I freely confess my color-commentating sins here as a post-game analyst goes; as uva’s pillowing fighting approach striped pretty much all my gears as any measure of real live analysis went.

Or in other words… does that politically incorrect rag-doling of uva amount to anything more than a bum-fighting faux positive? Be honest here gents… does it?

Because believe it or not; last Saturday’s annihilation of former, in-state rival uva -which I firmly predict leaves an applied sports psych mark; as coach-Fu’ has never been opposed to running up the scored or sending a: “yah, we just neck-punched and junk-kicked you; and guess what yaHoos? We’re already fixin’ to do it again come 2017″. As gone are the days of the former regime taking it easy on people in as much as you do have to play them again | here are the days of a high-octane offense that is so starved for repetitions as if Corny’s language does not even have word for menu, never mind a word for eat.

Nonetheless, and here where real men congregate and speak truth to the power; as last Saturday’s epic throat slashing of uva in a warm Duck Pond bath won’t be enough to upset Clemson. 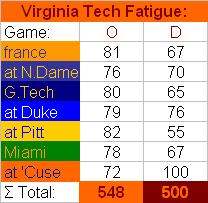 Have we improved?
Yes.
Do we deny this?
No.

Are we still capable of getting even better? (and a bit healthier, see: lowercase defensive fatigue in the last few weeks of gaming)
Yes again.
Do we deny this?
No.

However, As Maeve from WestWorld cleverly stated above; it takes one to catch one, so can we Virginia Tech football, a -12 point underdog, theif one down in Orlando at 8pm on Saturday night?

We do actually have a chance; as we may indeed just be peaking at the right time; and yet we must wait to ask ~12 midnight, if this Atlantic Coast Championship theft  remains to be, seen…