15 up and 11 down North Carolina State is up next and this is a road date in the always foreboding visiting climate of Atlantic Coast Conference play.

Or in other words, State and any given Wolfpack post-season chances can ill afford a rather upsetting L to underdog Virgina Tech here.

That said, although I’m not dead sure that State is in fact a post-season hoops club, I’m not totally sure they are not; either. As this one was prolly somewhat within our grasp 2-3 weeks ago, as State was not beyond our depth at that point in time. However, the last two away O&M contests were not all that shiny, as Virginia Tech and debut year Buzz Williams appear to have hit a wall, of sorts.

NC. State at a glance:

Wolfpack Backcourt: (returning starters=2 of 3)
Anthony Barber: goes by the nickname “cat” and stands in at 6/2 180 lbs. of Hampton Va. escapee sophomoric Pt.Guard stature. Barber leads NC.State in assists with 3.6 dimes dropped per game, he chips in with a third best 11.8 ppg and 3.6 rpg, backed up by 38% shooting from beyond the arc. Barber is also the best ball-hawking defender in the Wolfpack backcourt and leads State in steals (.8 spg) accordingly. Was the 9th ranked baller outta high school in the USofA according to Scout and Rivals alike; and basically every recruiting service had him as first or second best as Point Guards go in the nation. So this is truly a big-time recruit for the Wolfpack, who has been good, although maybe not quite the best One in his class great; at least not yet. Won a junior year Va.H.S. title and was the 2012 Group AAA Player of the Year for the state. Should have a high enough ceiling -possibly even a very high ceiling- before he is all said and done –does employ something of a low-release point and a “microwave” Vinnie Johnson looking shot for it.

Ralston Turner: 6-5 2o5 lb. r-senior year Louisiana State transfer shooting-G who same as Mister Lacey down below, is an Alabama boy born and bred. Ralston Turner is not quite the 3-point marksman that he was last year when he lead State in 3’s. However, 38% is none too shabby for a kid with a series of stress-reactions in his right-foot. Right now Ralston gets you a second best 12.6 ppg with 3.1 boards and a team leading 83% from the charity-stripe. Ralston is a highly experienced baller and lockeroom upperclassman leader. Ralston is a member of the National Honor Society and he won a National Scholar-Athlete Award from the United States Army Reserve. Don’t recall typing that one out for a preview before. Great on Ralston! As he’s had a pretty fair career, for not exactly having the most dazzling scholastic acclaim coming outta ‘Bama five years ago.

Trevor Lacey: r-junior 2o8 lb. 6’5” leading scorer and Alabama transfer off-Guard who is prolly sniffing around for at least 3rd-string all-A.c.c., maybe even 2nd team honors. 24th ranked recruit in the nation according to Rivals. Three straight Alabama state titles, the M.V.P. thereof and being named Mr. Basketball Alabama, twice, would all seem to agree. 31 ppg and 8 rpg is great high school work, if you can get it. 16.5 ppg with 4.6 rebounds and 3.4 assists all on a sharp looking 42% from the perimeter is indeed some level of all-conference work. Trevor could possible use a little defensive work, as he is offensively prone at the heart of it all. However, presuming he does return for his senior year, he’s at least a Top-10 A.c.c. baller in ’16, maybe closer to Top-5 if he continues to improve this much; year-to year.

State Frontcourt: (starters back=none or 1 part-time)
Abdul-Malik Abu: 6’8” 240 lb. right mass laden rookie year baller from Boston Mass. 32nd recruit in the nation last year from ESPN.com, and basically a top-10 Power-Forward no matter where you look. Pretty good tennis player inhigh school, and he was also the Girl’s lacrosse team-manager (wink-wink). Can’t say I’ve ever read that one, in a player bio’, either. At this moment Abu nets you 5.6 ppg to go with 4.5 rpg and he does have a bit more range on his J than you might traditional P/F expect. Big enough and physical enough to be right enough to hold his own at age 18 down low in the post in Atlantic Coast play, and that’s not 1/2 bad for a nugget year baller.

Lennard Freeman: 6’8” 255 thumper of an Oak Hill Academy pure Power-Forward with the emphasis on the word power. A prototypical Right-mass northern hemisphere baller who is thick-set upstairs or above the equator. A strong, physical, demanding Four down in the key who scores 3.2 ppg along with a team leading 5.7 rebounds per contest which has helped force his way into the Wolfpack’s starting line-up. Only shooting 41% thus far this campaign. However, his moxie and pure raw high-voltage physical presence is not to be denied down low. Will dunk on you and hard, if you let him. Len’ may not be a natural offensive riot, however, he is just the type of Four that nobody likes to check, as his bump-n-grind style will leave you black-n-blue all over. 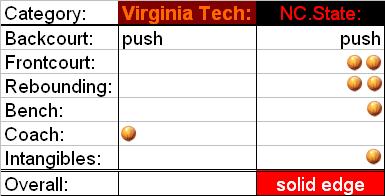 Illation, conclusion (s) and OPT digits:
Chris Coleman and I caucused a bit on this one, and although I would not have (quite) put things as Chris did, I’m not in a position to disagree, either. Chris says (in so many TOS words) that State is too big for Tech down on the low-blocks. I do agree, although I will add in that I found State to be too balanced overall. With a good though not great set of twins in the frontcourt and in the backcourt alike. Ergo, this is not a good match-up for slumping and perhaps even foundering Coach Buzz and good ole road weary V.P.I.

The rebounding edge says so, the shot blocking advantage says so, and so does the generally superior Raleigh Nc. defensive squad at this moment.

Then we come to our handy-dandy friend the so-called Forum Guide of Graham Houston fame -which compares how teams or fighters did against previous common opponents head-to-head- which oddly enough, merely posits an 11 point State home win in this one.

State has A.c.c. wins over mighty Duke and @nationally ranked Louisville to its credit. State also has 5 A.c.c. L’s, by 5 points or less. So State is either  a bit inconsistent or closer to being very good than most think.

Our beloved Hokies on the other hand are o for the year (o-9) on the road and  have been pumped good-n-hard in their most recent two roadies by a stunning 45 points combined! That’s not a good sign folks, and methinks that that is prolly code for becoming an outright late-season a trend. As this youthful and frontcourt challenged O&M hoops team is hitting the proverbial wall as I type. Too much wear-n-tear, not enough plain ole applied sports-psych encouragement or W’s …as enthusiasm and therefore effort appear to be waning.

The one lifeline I did find -for the eternal P.A.T.T. in you- is that State has softened to 39.o% allowed on their 3-point defensive end in their most recent five games. Beyond that, I can’t pick anyone not named State here and be accused of still being cogent; the only real room for discussion appears to be by how much? (and if you feel Tech is hitting the wall, I’d have to say by mid-teens, maybe more)