Today’s word of the day is… revanche! 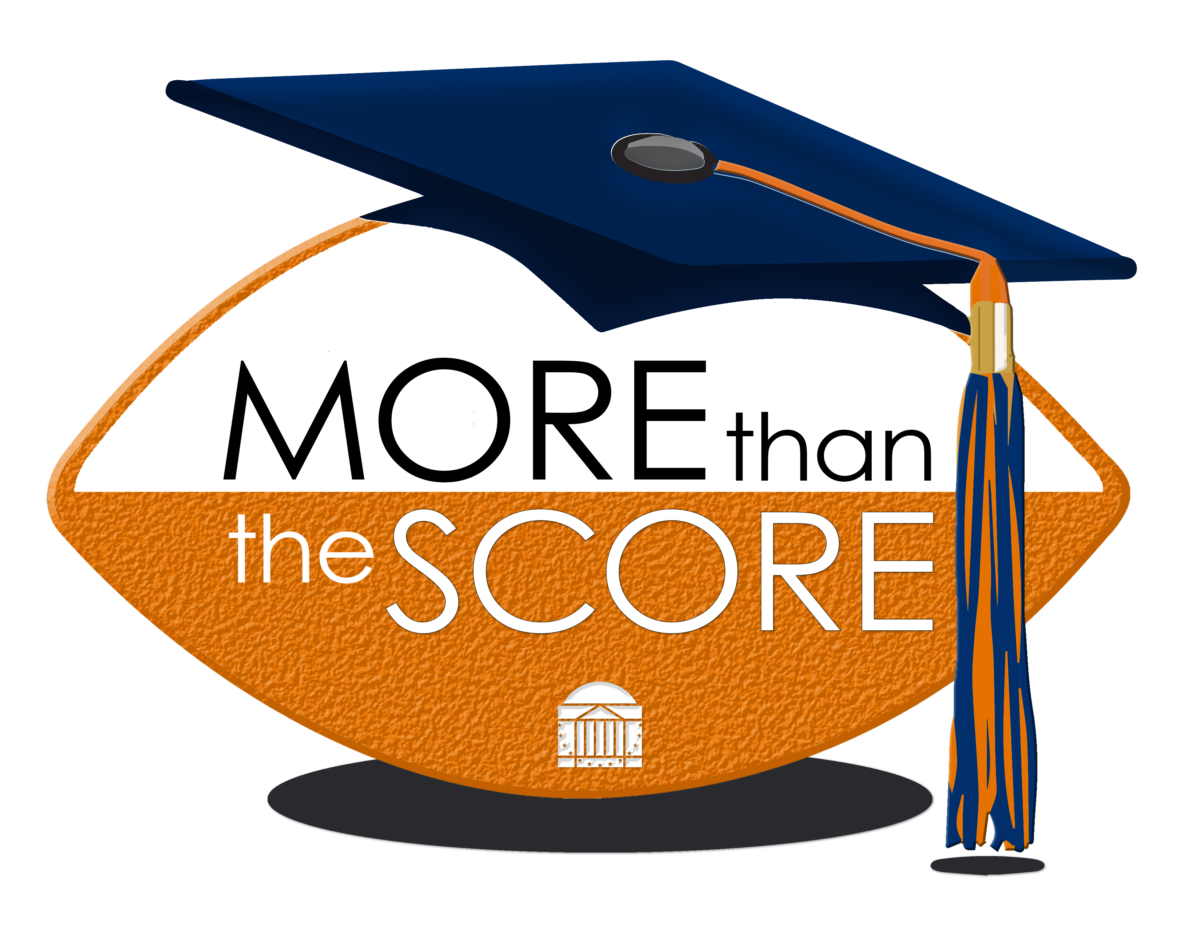 virginia Head Coach: Marc Bronco Clay Mendenhall: age=54, (3o-31 @uva and 129–74 overall); has a rep’ for defense, no-nonsense, strictness, quirkiness, and even more quirkiness.
i.e. the quirkiest. And for big-time long-view player development. (one of the best; here).
(and he has a rep for rough/thuggy play… B.y.u. won: dirtiest S.I. team many a year under this bronco-buster; no shite!)
$3,400,000.oo

Coach Bronco also has a rep’ for… bowling. Well, he did, up until three years ago, as Bronco Mendenhall (head) coached football teams had gone bowling 100% of the time. And yet guess hoo is going bowling; again? In addition to that, Bronco has a reputation for defense overall and the secondary in particular as he was an Fs and team captain for the Oregon State Beavers back in the mid 198o’s. Bronco has also placed a flashy 68 ex-players with the National Football League since 2oo5. He is also known for graduating his players, and ranking his former program seventh for most Academic all-Americans during his tenure at Brigham Young. His dad was a stalwart De for B.y.u. in the mid-1950s and his brother (Mat) started at De for the Washington Redskins in Super Bowl XVII. So clearly football is in his blood and likewise all over his sporting family tree. Bronc’ has tallied three conference titles and one conference Coach of the Year award (2008, Mt.West). He helped pioneer the modern era Spread-fighting blitz-happy 3-3-5 defensive scheme; which industrializes an Lb/S hybrid position in the hind-5.

With a track record of success at B.Y.U., a reputation for instilling order and accountability, and methods and metrics straight out of a stuffy reddest-state business management text, Bronco Mendenhall and his by the FOX News book ways and means have done about all anyone could do at his {sic: new} liberal arts school. As this no-nonsense coach may look like a very trumpeting or vanilla 7-5-7 pasty questionable fit; although -and to his credit- he’s been pretty colorblind after replacing a rather colorful (unqualified) tribal Minority hire. And to be quite direct; Bronco and his seemingly juxtaposed cultural fit are ahead of schedule here folks. So, props to Bronc’ for getting a big-M.A.C. style u.v.a. gridiron team into a bowl game threepeat, back-to-back-back. (prolly: a quad-peat at that… presuming of course…)

(readers note: this is last year to this year numerically as statistical national rankings go!) 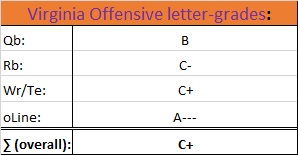 The cavaliers were 78th in Net Punting and so was Nash Griffin. They are now 83rd in Net Putting and incoincidentally so is Nash. Nash is a 6′2″, pretty strong looking 225 lb. final-year P. Nash is also a Koufax kicker or a lefty/southpaw punter so load the Jugs Machine for CCW (counterclockwise reps). As this reverse spin can and will handcuff you the first time or three. Nash merely had the longest punt (79-yards) of the D-1 season last year, which is great for the bronze medal in punting distance-wise at uva all-time. Nash may be ever so slightly familiar to you has he has ST’s double-dipped as uva’s P.A.T. and FGA-Holder since he got to T.Jay’s crib. n.Griffin was first string All-State in Indiana high school ball his Sr. campaign as a P and as a K alike. He was a 2014 Kohls All-American Punter to boot. He also has a history of FGA-fakes; as he was a soccer and hoops star scholastically so watch for a possible keeper on 4th-n-short here. Nash was 1st-string All-State (Indy Hoosier state H.S.) as both a Jr. and again as a Sr. And he went virtually 16 straight games from his perfected junior season until he finally missed an FGA during his final scholastic season! wowow! So far, he has 1 career rush and 2 career passes @hooVa. This year he’s right at a centrist 42 ypp. (which is actually a little better than 2019).

uva’s Kicker: final-year Brian Delaney. The 5′10″, 190 lb. K1 is not bad. As just a few years back and Bri’ was rated the No. 5 kicker in America by 247Sports. That has cachet, and so does an AAAAAA state titlist championship bling. So, I gotta give this special-boy that round 10-8. Gotta give Bri’ these rounds as well: as he was only rated the No. 1 punter in the country per Kohl’s Kicking and then only rated the No. 2 kicker by ESPN.com. Dang yo’… that’s some real live multi-tasking leg-talent there folks. Making uva’s inking of Brian something of a kicking-coup. Delaney has been a severe upgrade for Bronco as leg-swings go… as he has only three true misses on his résumé in the last two years. With three blocks allowed upfront (2019-2020) and that makes him more like one true miss K from 27-yards out to 49! Which may not a bionic leg suggest; although he’s pretty dang tough to beat inside of the forty-five. As a lotta teams wish they had his careerist 86% FGA reliability problems (even if they have to punt in lieu of a long FGA)— let me tell you.

Slot-Wr’s Joe Reed’s all-world KO-return numeric: (i.e. the only player in FBS history with 2,700 career kick return yards and a career average of at least 28 yards) are now N.f.l. ramming it home out in La-la-land. So, hopefully, this cools off a bit this year; though this is a helluva a return-game Talent exodus for uva.

Finally, as B.Patterson found last year… it is Oct.31st here some weeks; as uva is not adverse to whacky ST’s formations or outright trick-plays.

Special Teams letter-grade: like ’em or lump ’em… if they hoos find another good punt-returner(s) they are loaded for bear on leg-swing game itself. Grizzly at that… as this is not less than a B+++ ST’s unit on kick-game experience and acumen alone.

Number of cavs could hoo-ha @Tech=10

The takeaway here is…  the Apostle of All Conservative Conference himself -and the guy hoo sure seemed like the least likely C’ville liberal arts cultural fit- is doin’ pretty sharp work(s) over at TeeJayU. 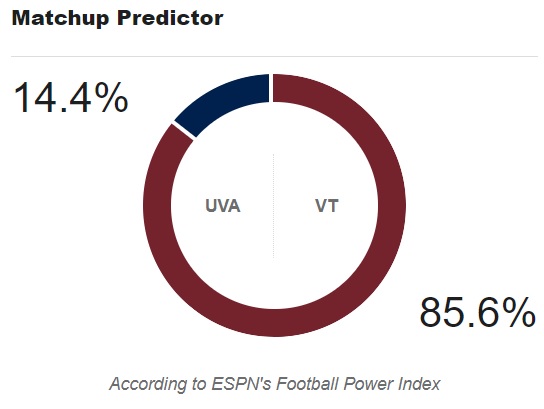 As you gotta give Bronco this round 10-8; you really do.

Who knew this staunching starchy of a McCarthy Era r-state guy was just what the libby-lib’ bluest state uva med.school football ordered?

As Eye truly thought this hiring all ‘rong on all kinda level(s), plural.

One could also be forgiven for typing that one team is peaking and it is the team that has tallied 43-points or mo’ in 75% of their most recent four contests.

…whereas the other teams’ Qb1 is physically right and his game is peaking as I type.

formulae here favors:
The team that did not play the possible National Champion Clemson last week.
That, and I’d like another day to prep’ for any seldom seen 3-4 defensive set; if I can get it.

#ChallangeA.c.c.epted… there are 1,440 in a day and VeeTee prolly needs to win a good 55+ minutes here. And they may need to fight for 65+ minutes to get this one done at that.

As the F’n Gobbler optics are as blurry and unsightly as they can be.
In extreme particular in V.P.I. locker-room/ear-hole terms.
As VeeTee sure feels more parts astigmatism and less
parts Lasik here to me.

…the skinny is pretty thin. As in both teams are gonna get their depth-charts tested in this one and the deeper team may just be he who laughs last come midnight on Saturday night over in the unseasonably pleasnt New River Valley.

TTT Analysis:
Both teams plum git after it and get into your backfield on D. Although the Vice Squad is not bad at this, uva is apparently better at plugging dykes and keeping leaking under check.
EDGE=uva.

The most recent 3-game splits tell us that…  uva is up a whooping ➕110-yards of total O. With uva improving (throwing in particular) and VeeTee retreating in run and throw fits, tho’ in particular on the ground. On D… uva’s D has moved by a whopping 9′ to the worse, or pretty dang consistent compared to the year-to-date vitals by-the-bye. The VeeTee D has moved by 3′ in total with run-D gaining nearly every single inch that throw-D has loosened up on. Strange…
EDGE=uva (virtually all on O).

The H/A splits say that… the uva O drops by about 30-yards in your house (pun intended as most of it is an aerial slip). Although the Fu’fense is actually worse by 20-yards @Home (a little on the ground and a little atmospherically). On D and uva wilts by about 25-yard per contest (most of it down in the trenches). With O&M eggs and j.Ham actually restricting by a decent 40-yards to the good, more of it on disallowed carrying.
EDGE=VeeTee (at least a little, on stopping).

Our handy dandy friend, the so-called: Forum Guide of Graham Houston fame is merely calling for a safety or 2.25 VicTory in this one here! As both teams really split things up as common round-robin opponents went when taken head-to-head. The only other trend was VeeTee was better earlier on vs. common opponents with uva catching back up vs. common opponents of late. (and this could be significant if not telling; at least to me).
EDGE=mini-me or half-play to VeeTee.

All of ^that^ to say… the one intangible thing that struck me immediately raised to the instant power upon breaking tape on uva was… they are far more enthusiastic to play right now than we are. Noticeably raised to the quite a bit power for the inner McBryde Hall in all of you.

Which only means one thing… hoo do you head-game trust mo’, here?

While the Cavaliers are looking for their first five-game winning streak since 2007, the Hokies could end with a negative record of L’ers for only the second time since 1992.

Wait for it… you know it’s coming…

…thus, making this one a game of…

Two ships passing in the night.

Start=finish here. And to turn this one on its opposing head… if I am Bronco? I hit the potential ‘quack-attack’ or lame-duck Fu’ with everything I have right outta the damn gate. I chin-check Fu’ and company via throwing opening 1st-round bombs and see if I can at least bomb their O&M head-game right on outta there from the word: “go”.

As in… I found it most intriguing… to see how the uva-players took to the earlier postponement(s)/movements. As in… Eye saw no fear in their pre-game outlook back in September. Like they not only wanted our work -they were NO longer- sweating the same.

Which is quite the clinical role-play reveal in prisoner gone jailer of late.

They seemed pretty damn confident that they were/are now the mo’ physical team and that they could bully us into coughing up our lunchroom monies just the same. This is the ‘whisper’ I had picked up on from a few coaching contacts as well. Bronco has convinced them that not only are they the better team, that they are the harder if not tougher team and that’s a pretty smart look.

There are also several breaking vibes that Fu’ has 60-minutes left in his career with replacement Coach Next offer(s) already extended at the end of the revanche rivalry game-week itself.

That’s a helluva a look Whit.

(as this shoulda been your post-game or Sunday outreach).
As this undercuts a nearly ain’t got a leg left to stand on quad amputee Fu’ right as rain.

As the Whitlocked Hokiebird may just lay a stink opus magnum egg here.

As the only calculus Eye have left is— does this one end truly Fu’gly or not?

Or, maybe Eye shoulda choose: “meow” for the word of the day?