Virginia Tech men’s basketball returns home to defend its very own Cassell after a successful enough sojourn over Maryland way.

The Hokies did not play their best. Although, they did play good enough when they *had* too; or when trailing out on the BIG-1o road; and with things seemingly about to banana peel a bit and get away from them. Now they catch their inaugural 2021-2o22 Atlantic Coast Conference opener vs. Wake Forest in the 24o6o. With a possibility that Wake is vastly better (at least early on) this year than last. As these Deacons enter this contest preaching a 7 up and 1 down record. Pretty shiny, ain’t it? Nonetheless, what you wanna know is who is gonna win and by how much, rights? So, read on… to find, out! 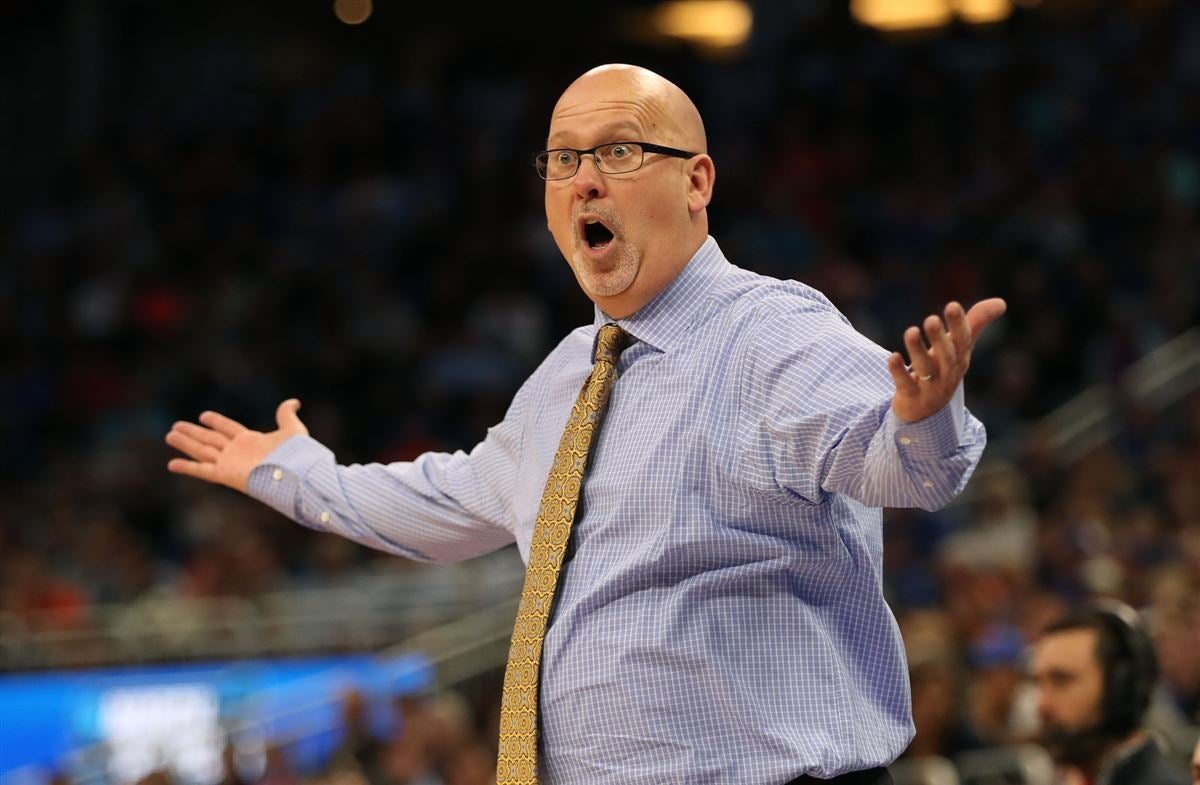 However, it was over in the Tri-Cities where he really “made his (skull)-n-bones” … what with East Tennessee State Buccaneers having won 130 games and two SoCon championships during his tenure. While all 22 of his seniors earned their ETSU degrees! ETSU.edu love insert (____) here, ✔! While doing all of this… Forbes joined elite company in 2018-19, becoming one of just 10 active Division I head coaches who have reached the 100-win mark in their first four seasons.

Wake Forest at a glance:

2nd-year, Carter Whitt (6′3″, 180 lb., Off.Guard) with 2.8 ppg and 2.1 apg are “PROBABLE” with a sprained foot/ankle from practice. (St.Sebastian help!). Carter does rock the long-ass Ric Flair curls. So, there is that, with no word from Tarzan or from Jane, yets. As Carter gets a decent amount of benching P.T. or minutes even if his digits have dropped a bit this season so far. As this One or Pt.Guard is a VHT (very highly touted), One, (pun intended). Per: being the top-ranked point guard in the state of North Carolina in 2020, according to 247Sports. Per also being ranked the No. 10 point guard nationally and ranked the No. 64 player overall nationally by Rivals. This after winning a lotta regional (Raleigh, Nc.) thingys and some Honor Roll love as well. Just not any elite or Statewide thingys which is curious if not conspicuous here? Ditto his chilly 27% from the floor and 18% behind the arc. As Cee.Dub is a better Pt.Guard than this. And his 2021 numbers are really down early this campaign. Maybe that wheel is still a bit, tired?

Khadim Sy is a 6′1o″, 24o lb., r-shirt, Graduate Student, transfer baller from: Dakar, Senegal. And he someway/somehow seems, familiar to me? Seemed familiar to Ole Miss. before that as well. Also familiar is the fact that Sy was: a four-star forward according to Rivals.com and rated the No. 3 junior college prospect according to 247Sports. Earlier on, he earned National Junior College Athletic Association (NJCAA) All-American Honorable Mention accolades by averaging 16.8 ppg and 9.8 rpg in his lone season at Daytona State. Then he went somewhere technical, or something like that? Did I mention the: ‘familiarity’ yets? Anywho… right now Sy is netting you 5.6 ppg and getting you 3.9 rpg in frontcourt relief. This on a most serviceable 47% overall and a mo’ than serviceable 45% from behind the arc. Good on gonna get the game of life right on a 2nd-degree, him.

Colorado transfer BIG: Dallas Walton (no relation), is a 7′, 23o lb.,  Graduate Student from: 5.8 ppg 5.4 rpg with the team-lead at 1.8 bpg is not half-bad pine-squad Post (office) work. Tho’ 41% from the floor and 21% from 3-point-land lacks refinement at this stAGE of his career. That all said, a blown right-A.c.l. (St.Nikon help) did buffalo his developing out in Boulder. This (saaaadly) after not one, two, that’s (2) full left-knee A.c.l. blow-outs (St.Culbert twice bless) out in Colorado H.S. fame. So, you really gotta wonder where poor Dallas is on even 1.5 good wheels? As he sure has given of himself and his body to this hardwood game. Dang, dang, dang…

Junior season stretch-F Grant van Beveren …G.v.B. is more parts rebounder even if he does not even remotely look the pasty-part. 6′6″, 215 lbs. of a very J.Crew kid who averaged 20 rpg in high school ball down in the Peach State of Ga. That’s all. He also only has one state title bling, from: Volleyball! As there are those who thought van Beveren woulda -and maybe even shoulda- picked the other sport. Granted, his Aunt (God Bless), the late Heather Holmes, played volleyball at Clemson and was the head volleyball coach at Wake Forest from 2005-12; mum played college volleyball (Clemson), pops played roundball for So.Methodist.U., and his uncle is only the Director of Scouting for the MLB S.F.Giants. The even mo’ curious part is that Grant is not in any of my pre-season mag’s (at least not fo’ Wake Forest). (UPDATE: van Beveran was OUT with: “undisclosed” … tho’ back recently God bless). Back also are his couple of points/boards alike. 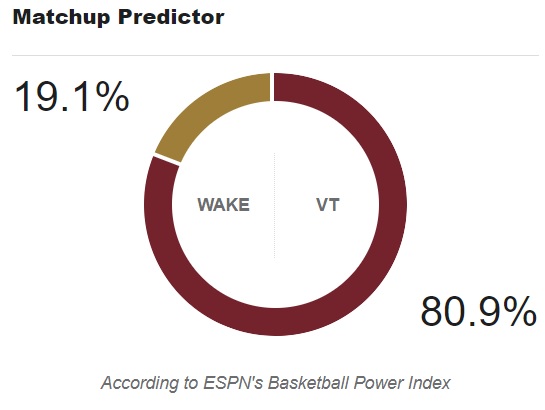 …well, this one is not gonna be as easy to A.c.c. Opener takeaway as I had first thought.

As Wake is right on course— and frankly who springtime 2021 knew?

(NOT any of my pre-season mag’s as well…)

Tho’ Coach Forbes -to his credit- has fashioned something of a grim, gritty, gutty buncha gamers. They may not be great. Tho’ you have to go’on and beat ’em.

…as big Stevie is prolly your early clubhouse leader for A.c.c. Coach of the Year.

Our handy-dandy friend the so-called Forum Guide of Graham Houston fame is calling for an in-League scrum soon enough ask back in a fortnight give/take.

The most recent 5-game metrics say that… the Decs is now up 2% in shooting percentage margin (as Hokie D has waned a bit…); the Gobblers however are now up +6% in 3-point percentage margin (again, Hokie halt-unit work has placed a temporary hire), and the Decs is now up +2 in rebounding margin in the last fortnight of caroms. (NOTE: neither team is getting better— so much as one team (VeeTee) has gotten, less).

BOTTOM LINE: Virginia Tech looks for its seventh straight win in the head-to-head series over Wake Forest. In its last six wins against the Demon Deacons, Virginia Tech has won by an average of 14 points. Wake Forest’s last win in the series came on March 4, 2o17, an 89-84 victory.

STREAK STATS: Virginia Tech has won its last four home games, scoring an average of 76 points while giving up 46.

TENACIOUS TECH: Virginia Tech has held opposing teams to 53.4 points per game this season, the second-lowest figure among all Division I teams.

So, for most hoop-heads… the real calculus here is…

…then again, BOTH teams overall ppg-marker has moved (or contracted) by –6 ppg recently has each has faced some legit/real O.O.C. (out-of-conference) non-cupcake competition.

Wake has played and beaten successfully enough: …one in-state (Bill & Mary), a few nobody Carolina’s, a couple of smaller-case H.B.C.’s, and yet one P.A.C.-10 (Or.State) and one BIG-10 (Northwestern). Decent, seems to wanna pass the sniff-test, right?

The S.O.S. mathematics or reproof just began to coalesce… 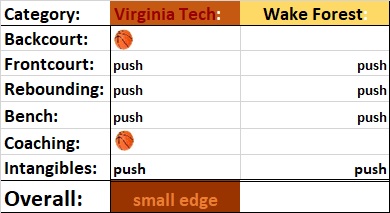 There are credible Diaconate improvements here… are they preachy credible enuff over in the moderating weather-wise New River Valley?

Methinks, we need to get caffeinated here just in case…
…as me doubts Wake can take our A+++ O&M alarm clock upside their head.

And even if they are truly *that* improved?

This one is (still) all about, us…