Today’s word of the day is… mul·li·gan

After this Coach, Clawson really went itinerate or Larry Brown vagabond in the lower echelon college ranks. With tourstops at: Brown, Villanova, Leigh, and eventually at Tennessee. Then he broke in as a head-honcho at: Fordham, Richmond, Bowling Green, and now at Atlantic side Wake. Coach Claw’ has never posted an overall tenured L’ing mark tallying north of .5oo ball by the time he left the given school. i.e. he improved every single program that he served as the head-master thereof. Not everyone can say this either folks. Coach Dee.Cee. had won three-straight bowl games @Wake, although he was o-for-life in the post-season prior to that. And frankly avoiding getting lesser talent(s) exposed on longer post-season prep’ times is regular season Coaching the capitalized Verb.

While only being Conference Coach if the Year four times and only being a lowercase classification National Coach of the Year; twice. I know that’s not the So.East. or murders row— nevertheless… is coach Claw’ the first coach in the history of history to do all of this? Coach Claw’ has also spawned one former underboss into a big whistle in his own right: namely: Russ Huesman: Chattanooga (2009–2016) then Richmond (2017–present). 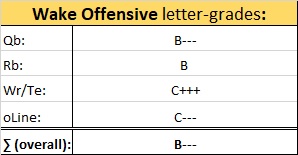 Wake Forest is 53rd in Net Punting; and not coincidentally so is Wake Forest Punter: Ivan Mora. 6′, 173 lb. r-Fresh. Mister Mora is an interesting kid, a Russian Christian name with Moor and Spanish family roots? Be yeh blue or red, the RW&B is indeed the ultimate Heinz 57 variety sauce in (♠’s) spades. And kicking variety -unsurprisingly- is his flavor as well. Check it… Ivan was merely Team captain at Dalton High School (a Specialist nearly unheard of, rarity). He was only ranked as the No. 3 kicker and the No. 1 punter by Kohl’s Kicking in all the land! And he was just the top-rated punter in a camp with 600 other punters, which earned him the prestigious Sam Foltz Award. That’s all. This kid sucks; cut him now! Other than that? He was only all-state (Peach State, A.K.A., Ga.) in soccer and he only courts a 50-yard ranging leg on FGA’s. Tho’ he is more parts collegiate Punter now and a 2020 Ray Guy Award nominee already. Ivan has a (short) career-long of 59-yards punting in college thus far. He is said to have more leg in the bag than that. As this kid has the look-n-feel of an all-conference legger, more parts ‘when’, less parts, “if”.

Last time we saw him… least we forgets… Nick Sciba was/is a quality place-Kicker. Actually, he was a perfected quality Place-Kicker the last time we saw him, as Nick had yet to 2019 miss (15 for 15 FGA’s and 36 outta 36 on P.A.T.’s) and he is (now) only a paltry 5o for 57 on his collegiate FG-kicking life. Plus, he has never ever missed a P.A.T. Not one. None! Yes, I’d have to say that counts… as Mister Sciba is an automatic-weaponized version of the FG-Kicking position itself. A reasonable caliber one to boot what with his 5′9″, 188 lb., plucky looking or sawed-off Jr. year approach to kicking (aim block-points low here coach Shibest). The queer thing is… Nick only has one make >45-yards thus far. (A 49-yarder two seasons ago). So, Nick may not quite be an Iowa Class 16″ main-gun after all, although his optics and targeting software inside of 40-yards is Bismarck epic indeed. And Wake will go to Nick on any medium FGA and take the 3-pointer and KO next, for it to boot. The no.7 Kicking prospect in America (per: 247Sports) and he has something inked about his “dad” on his left inside biceps. Kool kid, and a cool-Modine K who obeys his range to the 100th percentile degree. (BONUS: Pts. are awarded for being a: Kick-it-to Cancer and the fight to help stop pediatric cancer sponsor, and his G.P.A. is a mere 3.8o; may St.Elmo’ bless Nick). Plus, Nick seems to be 2019 heating right back up in 2020 in the last couple of weeks. As this kid may not be All-A.c.c., he might just be N.F.L. And oh yes…  kicker Nick Sciba, ONLY set an NC2A record with 34 straight made field goals until earlier this campaign. That’s all. CUT him immediately!!! As he only has 1 mo’ tackle than you and I do combined in 2020.

Special Teams letter-grade: In coaching sewing-circles, Coach Clawson has a shiny rep’ in all less Special-Teams coverage and return units alike. Because Coach Claw’ won’t risk what precious few stars he has on blindside hitting here. A “Gölem” approach to ST’s born of necessity if you will. Leg-game is epic at K, easily good enuff at P and everything else is mixed; at best/at most. B+ just for Nickknack himself.

Number of Deacs who could peach @Tech=8 maybe 9

The takeaway is… that on the back of four straight bowls, resumê growing Coach Dave Clawson has forged a reputation as one of the top program builders in the country. 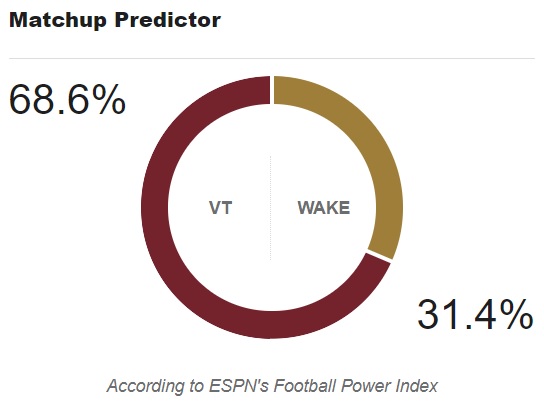 He has his Deacons winning with a consistency never seen in the program’s history. That stability will be 2020 challenged, although, as Clawson departs his starting Qb1, his leading Rb and Wr’s, three starters along the Oline, his stud-Te, his best Lb, and his two starting Corners.

And oh, by the way, it is a lack of recruitable quality 2’s and 3’s on the Deacon depth-chart that has been the program’s biggest issue over the last two seasons.

In particular on a reverse Beamer look of giving the O the peachy-keen first choice of ballers. This has left even good-health W.Forest football teams somewhat defensively harvested, or deforested if you will.

(i.e. with good health this opener makes no nevermind; with insalubrious health however and Wake may hit the Coach Icky Crane snooze button indeed.)

formulae here favor… having a BYE or OPEN week before you face this flex-hesitation-based mesh-point option attack.

Or a bowl game of at least a month+ to rehearse, prepare.
Seriously. EDGE=Wake all the way! (even worse with travel-time constraints for Tech).

#ChallangeA.c.c.epted… there are 1,440 minutes’ in a day and hopefully favored VeeTee need not win a whole lot more than 40-45 minutes worth of scrumming here.

The whole Deacon system and everything Wake Forest does sermonizes upon the offense cranking up consistent production. Even when the points are not quite there, the O has to sit the so-so to suspect Deacon D and still hit third-down conversion after third-down conversion. This is mandatory pragmatically.

Accordingly, the Deacons have improved in each of the last four years, and last season led the A.c.c. by converting over 47% of their penultimate {sic: 3rd} down tries, hitting the mark or better in eight games. Wake was a perfected 6-0 when it was able to do it— because in the last four seasons, Wake Forest is 17-3 when converting 47% of its third-down attempts!

One of the truly bizarre-O things in writing this preview was/is… my pre-season preview magazines. As in… virtually all of the (nominated) positional takeover or replacement 2020 guys have not been 5×5. As hardly any of ’em have panned out. I know this as I wasted 20-30 minutes trying to find out where they depth-chart (or off-campus) be.

As Eye am sure where they ain’t, they ain’t starting and that’s quite a lotta turnover or outright flux for what is a truly fluxed-up year both on-field and off for everyone thus far.

i.e. unless Wake detected a heretofore hidden bobby-dazzler mother-load of emeralds in the tall grass? This is unlikely to be code for a good look.

Lo.FM analysis: Well, -and ‘yes’, Eye know- wells are for H2o, granted… tho’ still yet, both teams are about average on 1st-down O and after that? Both teams need subsequent Downage help in terms of remaining on chain⇔gang down-n-distance schedule.
EDGE=push.

(mo’ charted up above… tho’ winning 3rd-down vs. Coach-Claw is a criticality here!!!)

TTT analysis: As you can see… VeeTee enjoys some really field-position tilting metrics in their Gobbling favor here. VeeTee and O&M eggs and j.Ham need to go’on and bully the pulpit of these (seemingly) flimsy-looking Deacon’s, indeed!
EDGE=VT.

That, or we are on a really homesick lovestruck heartbroke 125 miles nor-by-nor-west quiet as a mouse return trip for our got all kinda preachy troubles.

As one thing I’m seeing is… I ain’t seeing anyone froggy enough to pick the Hokiebird to get upset, @Wake, vs. the downright squirrely Wake Forest mesh-point O.

This Eye consider to be strange in my considered opinion… what I find to be even stranger yet is… that our handy-dandy friend the so-called Forum Guide of Graham Houston fame is picking VeeTee to win by 24-points!

As I’d have to pick that as a truest best-case scenario in this one.

Nevertheless, perhaps a reach pick that is within our best-case Coach Robert Browning grasp when you consider that the Forum Guide rushing margin favors VeeTee by a nearly mindless +296 ypg! (or by 29.6 ppg).

Well, I’m planning on trying to eval’ and finally game some measure of R.A.T.T. traction just what O&M eggs and j.Ham be cooking-up❓

As the saltier 2nd-half of tacking vs. Boston College would be most oddball hesitation mesh-point based Wake Forest edifying here.

As anything less than efficacious tackling here and do not die of shock if a shootout type contest erupts down in Winston-Salem. A Tobacco Road scoreboard smoke ’em if you got ’em kinda deal whereby he who scores last laughs last.

… let’s just hope it does not have the makings of the first one even if the third one suits  the TV suits just swell.

As VeeTee has erupted for 71 points in six quarters under the direction of Hooker and unless O&M eggs and j.Ham’s driver starts to find the fairway?

The Fu’fense needs to roll more than a few out there in the short-stuff under a Captain’s Choice format, or maybe j.Ham needs to break out the 2020 3-wood?

This year needs Herbert to stay healthy and keep slicing opposing D’s up like a champ’ and maybe we all do need to hook j.Ham up with a 2020 mulligan indeed?

As there is gonna be a real defensive wake-up call coming through somewhere between now and Miami.

The only Q is… does it come through Saturday night at ~7 pm?