Fun film to watch and it has been a while since I’ve had the pleasure of pronouncing that in my header after some L’s in our initial contests, or some very upsetting looking first or second games in the last handful of seasons.

Virginia Tech did precisely what you are supposed to do to a D-1aa football program, as we handed Bill and Mary their healthy visiting check pre-game and then proceed to force-feed this Tribe knuckle sandwiches all-day after that!

This is precisely how a big-time host treats a small-time visitor, and one has to wonder if the “kinder gentler” days of Frank Beamer and company are now officially a few bull-in-the-ring or Oklahoma Drills behind?

3rd Q season remaining:
Well, one thing my peeps called here is that the next block our KO returner’s throw for each other will basically be their first. As this is some sad azz looking (bleep) on film! I get that stars are not used to blocking and I get that blocking a suicide squad is never ever any measure of fun. I also get that at least getting in the way must count for something. Almost M.Davis ‘esque looking at times on tape; it was that bad.

3rd Q 2nd offensive drive remaining:
Three full steals on this drive alone folks! Wang, McLaughlin, and even the Farris-wheel all getting in on the physically just beginning to establish themselves, and then actually beginning to physically take over on the drive after the roughing the Punter call. I don’t know about you, though “yes please” from me on that.

And I do find it very curious to see so many double-team seal blocks on the Bill and Mary front-side second-layer in this particular half of play. So I’ll repeats that: double-teams on the second-layer, or NOT on the first-layer or down-linemen where you might expect to see a signature Blast-play double-team upfront. I do not (yet) know if this was via accident or via design, as we did have the Tribe outnumbered play-side more than a few times. Maybe coach Stacy is not want to teach chip-n-release onto a secondary player for whatever reason or reasons as well. Although we were +1 blockers play-side and at least partially squandered some of that doubling up on an already well sealed enough Tribal Lb from time-to-time.

p.s. if Shai has this level of footwork on 1 good knee and one 85% knee? Where is he next year with both wheels good-to-go???

3rd Q game remaining:
I don’t wanna hit this too hard -as it never once appeared to cost us- though I don’t wanna ignore it, either. What was up with all the Bud Ultra secondary very late re-alignments pre-snap on Saturday? Did we have some tardiness on getting coverage calls in? Trouble getting lined-up? Did we see things we did not expect outta this Tribe? Either way, something to watch for next weekend up in C’bus (Columbus) vs. a v-e-r-y sophisticated U.Meyer passing assault.

3rd Q game remaining:
Sam Rogers had himself a damn fine day blocking folks, one of the best blocking Fb days I’ve seen on film in years; plural. We gotta give this warhorse a carrot on a gimmie TD plunge-play call in the red-zone if #45 keeps this up.

4th Q 11:52 remaining:
One of the very few suspect shapes, was the inside-in leverage attempts of #41 G.DiNardo on Saturday. In a moderate set of Winslow moments, DiNardo forgot to play outside-in and funnel the play back inside or towards pursuing Hokie help on several hash-mark occasions. This is something that needs to be cleaned up fairly quickly with HR hitting Oh.state on tap, next.

4th Q 4:59 remaining:
Finally! Found me a good clean vicious steal, that unfortunately de-cleated our very own ‘Tua on this one as the W&M Fb simply pwned poor Andrew as he scraped way too shallow with nowhere near enough northward commitment on this one. (see: above pic)

That being said, ‘Tua sure plays with a lotta arm-violence right at the point of attack. And yes, I realize it is bad juju to sit a team captain down; however either ‘Tua is closer to starting or Chase is closer to being a 2. Take thy pick…

4th Q 2:18 remaining:
Why is an offensive lineman wearing a play scrip on his forearm???

4th Q duration remaining:
Both Wade Hanson over at left-Ot and likewise my partial boy Paker Osterloh with the onions to fight until the echo of the whistle! Each of these two youngsters was copping some ‘tude and looking to steal people late in what anyone else would have me transcribe as a meaningless and already decided game. It is however decidedly meaningful if your thermostat runs a few degrees north of normal as I for one like a little mean-sauce in my offensive linemen. (p.s. even Pfaff tried to get into the dirty is the new clean routine)

Our Qb (Mr. Brewer) was hit a record setting low of a mere two times in this game folks! Once on an impromptu sideline dash and only once in the pocket proper! his pocket protection reads were aces and our rookie Tb’s were spot on in protection and in pick-ups (most impressive — even a little surprising)

Whereas the Tribe Qb was hit 750% more often and you gotta give the Cluley kid of William and Mary some cred’ too! He stood in their in the face of a tooth and nails right in the mush blitzy pass-rush and did the best he could while taking way more than his typical Saturday fair share of shots. That kids’ not a softie, and flirting with even a 40% completion percentage under that kinda Post-traumatic enemy fire is no small thing.

The one TTT (Time To Throw) caveat being, I did not see much consistent pressure beyond my boy Dadi upfront. Did not see a whole lotta north-south push-back of the pocket by our down-linemen, either? Which figures, and which segues me neatly enough into some science-fact… (courtesy of: FrankismyHomie)

One final time men …you do the maths.

As this version of Bud Ultra is indeed ultra fast, and set to actually improve upon speed now that R.V.D. has been cleared full; and if/when we give the McKinnon kid some more reps. However, make no mistake about it, this is the smallest Hokie defense in over a decade of O&M football, and could this even be Frank Beamer’s smallest defense yet?

For comparisons sake, the Buckeye offense averages 255 lbs. and change per man or a staggering 32 pound advantage helmet-to-helmet! Do you understand me now?

Tackling:
Tackling was a little lackluster to begin the contest; although as you can see in the chart below, it did improve as the day wore on and Virgina Tech began to wear Bill and Mary down. And it will need to improve even more up in C’bus vs. the habitually home-run hitting big-play offense of Urban Merer; where one missed tackle can and possibly will equal six points the ‘rong way! 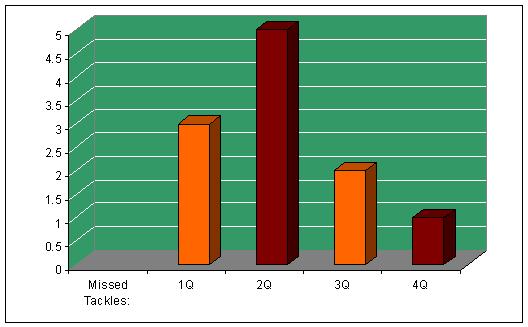 Blocking 1o1:
Well, this game was not just record setting as C.News and even coach Grimey stats go, it was off-the-charts (pun intended) record smashing! See for yourself… 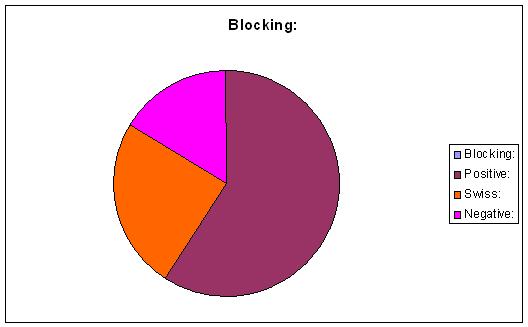 43 above average blocked plays (maroon), 18 average blocked plays (orange) and only 12 weak-sauce or pussy-cat blocked plays if you are keeping score at home. That’s what you call rag-doling or having your way with little ole D-1aa William and Mary folks! And that is precisely what you want vs. any D-1aa opponent if you are big-bad B.c.s. Virginia Tech! Notice however, the even or right-side oLine was the somewhat stronger side throughout most of the contest. Now do calculus on the experience imbalance as it is actually the odd or left-side that enjoys a staggering 11 seasons of collegiate football combined, compared to the relatively greenhorn right side with a meager five years collectively. Which prolly does bode rather well for the future men, and I do wanna point out, I did so enjoy the 4th Quarter temperament of (most) of the 2’s or back-ups. Some of them were downright carnivorous at times, as several of them played right up until the “echo” of the whistle, if not actually beyond! (Parker Osterloh, Wade Hansen in particular and even Braxton Pfaff to an certain extent –insert here, check!)

Odds-n-Ends:
As great as Michael Brewer’s day was, he did have two passes dropped and he did throw three batted or deflected passes (due: to his sit-down mechanics, previously documented by yours truly). Go ahead and expect every single remaining opposing defensive-line to reach for the sky whenever Brewer throws. Although a pump-fake here could solve all of that, and it might even create a running lane or two that would not have otherwise been there when opposing defensive linemen join the paratrooper club and leave their feet.

Finally, allow me to say, that if the Qb derby reports are to be taken as true, and if Leal really was tailgating the William and Mary version of Michael Brewer -who just flat out dazzled on Saturday- then Mark Leal could very well be the best Qb2 in the whole entire A.c.c.!

Under Center:
Seven times in total, one passing attempt, or a 14% chance to throw thus far when M.Brewer is not in the Pistol or not in the ‘gun.