Today’s word of the day is… gimme.

Coach Conklin served as the defensive coordinator at the University of Pittsburgh from 2015 to 2017. He played college football at Dakota State College in Madison, South Dakota as a star Lb1. Where Conklin.edu was also named: Academic All-American for the Trojans. Ergo, this is not just a proverbial dum’ jock. 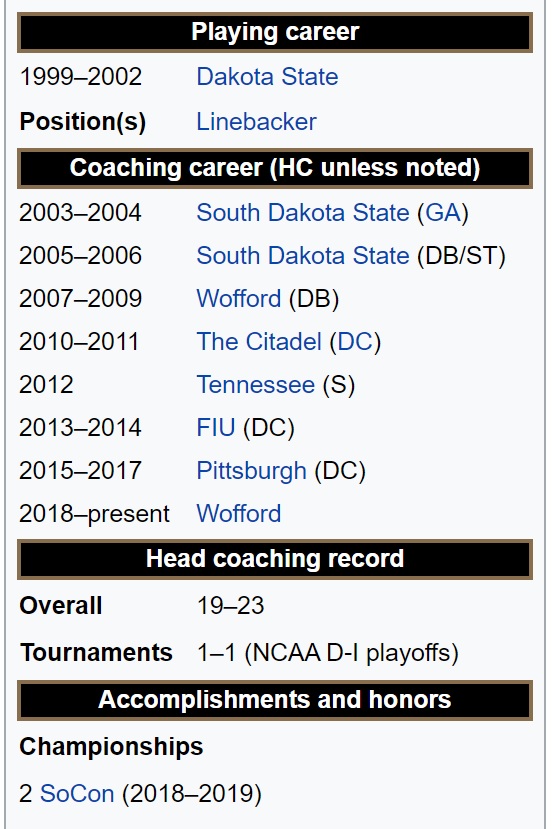 Hence, in addition to his bachelor’s in physical education from D.S.U., Conklin also earned a master’s in sports administration from South Dakota State.

Said to be a Secondary guy on defense having played a rover/bandit or hybrid spot in his own right.

Coaching sewing circles say Coach Conk’ is a very creative blitzer. His 111 sacks during his three seasons @Pitt say you should… ‘agry’. At his other tour stops, his hind-4 was known to play the ball not the man, and put up some very sharp INT numbers for it. Ballhawking 1o1.

Coach Josh did open with a nearly stunning 17 wins in his first two Terrier campaigns. Finishing 12th and 17th ranked nationally for it handsomely enough. Tho’ the last two seasons have collected exactly two, that’s (2) wins more spade and neutered combined. So, you’d have to think his seat is warming if not outrig

As our ex just fu’nd out… such is the realm when taking over for legendary coach Mike Ayers (218 wins). As you have big shoes to fill and had better own a lotta socks.

Poppa-Bear Conklin and his wife, Molly, have three children —sons Clark and Davis and daughter Millie

2021 record: 1 up 1o down and o’fer eight in Southern Conference play.

Defensive letter-grade:
D+++, I suppose. As there are just a couple of signs of life here. Not many mind you, although more than zerO on the other side itself. So, there is that…

Offensive letter-grade:
D–. There is just nothing to hang your hat on here. Nothing to have to key or takeaway in defense either. Bulldogs or even schnauzers these Terriers just, aints.

(i.e., hopefully, we have deployed some of our very own for their actually 2-o Townsen contest  as well) 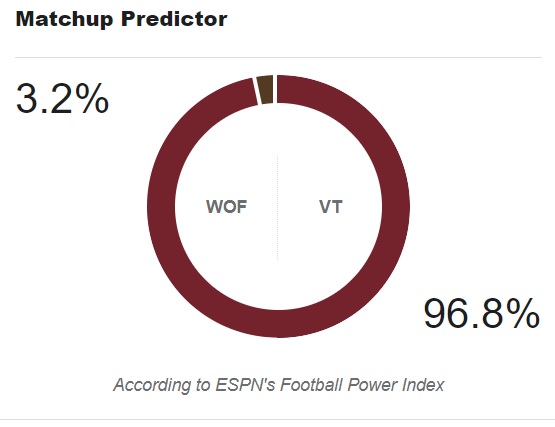 There is not too much to be too taken with here, right(s)?

Did Eye mention: “So, there you goes… not much to sees here”, yet?

Wofford is 1o1st or worse in seven of the 114 D-1aa National Team categories I tracked for this one.

The squirrelly part was these Terriers actually bit down and checked in at a sweet-16 D-1aa National Team categories that rated fair-to-middling or outright good/great.

Maybe they are not as entirely bad as they seem…

…not much if you are with the other guys.
Prolly nothing at all.

#ChallangeA.c.c.epted… there are 1,440 minutes in a day and hopefully we only really have to ante-up and kick in for 2o-odd-minutes or so here.

the optics…
Well, when you went out and raided Presbyterian and Navy in terms of your two alpha off-season recruits? You may just be in for something of a long season, itself.

the skinny…
Well, Wofford’s D is not as undersized as Eye had expected less one light in the pants Lb1. The rest are quite reasonably constructed height and width-wise on D. The Terriers oLine is just a little south of regulation-sized, tho’ there Rb1 is well north of the same (5′12″, 244 lbs., final-year: Nathan Walker). Walker does pass the eye test. Kinda stout in fact upstairs. (Wr’s are a slight lightweight allotment mostly, however).

Our handy dandy friend, the so-called: Forum Guide of Graham Houston fame is merely… see: above.

36th in 1st-down D for Wofford vs. a pretty piss-poor 113th best in 1st-down O for Glenn and Co. is about all I could find to acid-test here. Basically, if they give us much of anything on down number one, everyone else is gonna give us a one-two combination right down the 1st-n-1o pike and leave us beak-bent for our top of the 1st-inning troubles.

“It’s all about having fun,” Conklin said on his radio show this week. “Enjoying the atmosphere, enjoying the competition. Having an opportunity to go against some of the best competition in the country against good coaches, good players. It should be fun for everybody in the program.”

p.s. there are interweb reports that poor Wofford’s been (breakdown) delayed in getting to Roanoke on Friday nite.
Patron Travel Saints bless and intercede. Dang…

“We have some things that we have to get fixed, at the quarterback position especially,” Wofford head coach Josh Conklin said. “The good news right now is that I feel pretty good about what we need to do to get things corrected.“

Quarterbacks Jimmy Weirick and Cade Rice combined to go 7-for-2p for 59 yards in the air last Saturday versus Elon.

Nevertheless, only two things exist to be gleaned here…

In generic terms, the rule of thumb is “45” points at most levels or per most sanctioning bodies. Although some roll until you get to a lopsided 5o-nil look.
So be on the lookout for that.

You will learn something about how b.Pry the Sportsman cooks here.

That’s the only gimmie you could possibly make him putt, out.

upset Index=1%, if we are Arnold’s and The Cellar totally krunk!!!