Today’s word of the day is… shew!

Holliday was born and raised in Hurricane, West -by God- Virginia, where he was a football star as well as a state champion wrestler at Hurricane High School. He won a West Virginia state wrestling title at 175 pounds (all divisions) in 1975 at Hurricane High. Then he graduated from West Virginia University with a bachelor’s degree in Physical Education in 1979, then graduated with a master’s degree in 1981 in Safety Management. Holliday was also a three-year letter winner while playing linebacker at w.v.u.

Coach Doc broke in for his alma way back in 1979 up in M’town’, Wva., as a Wr instructor then a Linebacking sensei under the altogether decent Don Nehlen. While at the animal house of football, Doc coached the Top-3 career and single-season reception leaders in school history and eight of the Top-10 players in both categories. He also coached the leading receivers in the Big East in 1996, 1997, and 1998 while also coaching three of the top six receivers in Big East history; snap!

After that Doc was off to Raleigh, Nc. where he only coached three of the top eight receivers in school history. Do you see a trend, yet?

Then after a rather successful stint as the secondary coach for U.Meyer at Florida -hence the Sunshine recruiting connection(s)- Doc was back to w.v.u. where some felt he deserved “next” as head coach post-richrod. After two very successful recruiting seasons for the ‘eers and stymied by the seemingly head-coaching snub (in lieu of: Bill Steward), coach Doc took his game to Huntington, Wv. as the Omega-Whistle. After leading Marshall to its first Conference USA championship in 2014, Holliday was named C-USA Coach of the Year. Coach Holiday also received a contract extension through 2021 at the end of the season. Coach Doc has fashioned three 10-win seasons for the Herd and three more eight-win years in addition to that.

Coach Doc is perfected in the post-season, five for five in bowl games if you need him. He also has three CUSA championships in his nine seasons thus far.

Holliday and his wife, Diana, have four children — Meghan, Cade, Chase and Cody. 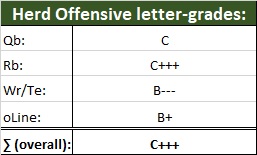 Marshall is 104th in Net Punting; and so is P, Robert LeFevre. LeFevre is a 6′2″, 196 lbs. r-Sophomore P from Ohio. Robert seriously looks like he’s missing out on a boy-next-door Levi Strauss & Co. career. As I’d bet the over on this guy post-game. As his punt-game goes… Robert has the thinnest bio’ I’ve seen all year. Not a very public kinda guy on whatever level(s). (No parents/guardians listed, nothing; God Bless). Anywho… he has kicked-off for Marshall and he serves as the traveling back-up KO-specialist in a pinch. LeFevre has five punts ≥55 yards so leg-boom he gots when he needs/wants it. Still, no word yet if he is related to the business tycoon or the famous Frenchy painter (Robert Lefèvre). Tho’ Eye did find that LeFevre courts a T&F quality 4.56 forty-time and a 34″ vertical -so the fake is in play here- and that he was more parts scholastic K than P.

Herd K, Justin Rohrwasser has missed 1 P.A.T. and is 70% on FGA’s, although that’s 14-20 and that means he only has 3 true misses due to an insane three kicks-blocked to date. So tough to glean an R.A.T.T. read, here. As in… how many of those blocks were really makes and how many would have still, missed? Our literacy here is where? That admission firmly in place, Eye do see that Justin is 20% (1 for 5) between 40-49 yards— that speaks of a (low) line drive kicker to me. Trying to punch the ball from distance with his foot. As he’s actually a shiny 88% out to 39 yards thus far. That said, at a stalky 6′4″, 224 lbs., this r-Jr. nearly looks the mini-me OLb, or jailbird part. Seriously, this is nearly a scary looking K and I’ve never ever typed that one out before. Justin was only a ** (two-star) K coming outta H.S., and he is a Rhode Island transfer where he was 80% on his FG-attempts for his ramming trouble(s). He has a career-long make of 42 in college, so expect some short-punts here if the weather is Decembery indeed. Though Justin is prolly a little better than his vitals suggest ¦ I’ll go good for that.

Special Teams letter-grade: MU is 90th in S&P+ special-teams Rk:. Me? Well, I’m just a little higher than S&P is, though not much, as there are just too many errors here. C- overall,
tho’ do not sleep on that KO returner!

The takeaway here is… this is the 37th S&P+ team playing the 81st S&P+ team. Marshall is a sporty 4-1 on the road whereas V.Tech is a thrifty 2-4 inside Lane Stadium. Marshall brings a 125th SOS (strength of schedule) metric in tow, whereas V.Tech has run the 66th most stringent docket.

So there is a difference there and there are those who are arguing that Marshall, their 8 up and 3 down record (6-2 in C-USA); and in extra particular their defensive stop-unit makers are not really all that and a snap. As Marshall was (nationally) ranked between 40th and 85th in the pre-season by the varying college football preview magazines I take. So consensus remains elusive, all season long, here.

That said, do recall what Will -who called uva correctly mind yah- what Will said about this years team facing opponents with an experience advantage. As Marshall has 82% of their 2017 starters out there in 2018 terms. Whereas Bud Lyte actually managed to register –3 (yes, negative three) in 2017 starters earlier this year due to injury(s). You do see what I mean, right?

Little help here, as I foresee 3 competing storylines (and yes, maybe on the Venn Diagram overlap, once)

…insanely enough, our handy-dandy friend the so-called Forum Guide of Graham Houston fame is (actually) in play here. As both teams faced the Monarchs of the 7-5-7.

The Forum Guide is indeed calling for an absurd (looking) 36 point Marshall Plan to VomiT us out on Saturday. In total yardage terms, it is calling for a mere 14.3 Herd mini-me sized stampede here. Although before we all howl while LOL at the Forum Gude… I -confess my sins- as eye felt the very same way on Friday 21 September 2018 A.D. You?

And we all saw just how well that turned out… I’ma, jus’, sayin’…

“We are going to play a really good and talented Marshall football team. I’d like to play someone else.” -Defensive Coordinator, Bud Foster-

Then, and per Chris Coleman of techsideline.com[1], we got to quantify this… Marshall accrued the 110th S&P+ offense this season nationally— while facing 70th ranked S&P+ defenses on average. Or only one defense north of warranting a C+ grade. Then Marshall did post the shiny looking 7th best S&P+ Defense in the nation— while facing 88th ranked S&P+ offenses this year on average. Or only two offenses meriting better than a C+++.

Marshall outscores peeps by a backbreaking 337% in the 1Q of play of scrumming this year and either holds-on or coasts-home after that. Or in other words, the start=the finish, here.

Whereas Marshall’s O is within <1 point of itself season long per quartering, the V.Tech D worsens all season long, every single quarter and is close to 200% worse in the 2nd-half. On the other side of the ball, the V.Tech O actually improves a little 1st to 2nd Q and again 3rd to 4th Q. Although the Herd 1Q D is nearly impervious to scoring and only marginally softens after that. Or in other words, the Fu’fense has got to win 1Q and 3Q TOP (time of possession) metrics here as they benevolently did for a nearly Miller Sharps version Bud Lyte last week. Got to!

This only serves to reinforce my take that the start is the finish here… as we did spray who knows how many emotional/mental bullets in an extra innings game last week no less vs. hateful uva.

Then we see what one source described as Marshall enjoying: “spectacular depth”… and you really truly madly deeply had better mind the staring to early O&M scoreboard store here. As bowl qualification per beating visiting Marshall will not get any easier as this early tip-off wears on. (attending Ginko glands, do, memorize, that…)

Although there are those bemoaning the Marshall SOS (strength of schedule) as bum-fighting. They are sparking bums up -as well they should- and at the end of the day, at the beginning of the day and at midday, they are bums after all. So V.Tech has a decent enough shot in a toss-up, close, likely competitive game at home in their 24060 house.

It really is one of those two… Marshall is not outta our reach although this is our worst team in those very same (bowl)-streak bookend 26 years.

Or in other words… do not die of shock if one team is up and the other team is flat. Or, we could even see two flat teams. If that’s the case this is a race to 25, maybe even merely to 20. First one there wins…

Ergo, therefore, to wit… I like the fact that this nubile Marshall Qb does not discriminate out on the road, and is willing to throw to whoever is open regardless of their jersey colour. Eye took solace in C.Coleman’s numbers, we are gonna need a big field-position tending game here; and I am hoping that Marshall Feels like they are visiting Sleepy Hollow on Saturday while we trick-or-treat them to some special teams new (Rip Van) Wrinkles. Noetic poetic, if you will…

Because -and to be quite candid here- I’d prolly pick Marshall in their house or under more normalized applied sports psych type emotional laboratory conditions.