Virginia Tech men’s basketball team returns to the Cassell Coliseum hardwood precisely five days young into the new (2019 A.D.) year. So happy Hokie New Year to all of you and yours and my humble thanks per always for reading me!

The HokieBird will be making nesting room for the 9 up and 3 down Flying Eagles of Chestnut Hill fame who will flap their 702-mile wings to get here for this high-noon Atlantic Coast Saturday early tip-off tilt. The Eagles are likely some version of a 2019 Marching along post-season squad. It remains to be verified regarding what tourney or what level of post-season prestige best suits them, however. As Boston College is not far removed from being a St.Charles Place version of Buzzektball right now; albeit it with only two houses and no hotels. Nevertheless, you wanna know who is gonna win? Read on… to find, out!

Boston College at a glance:

Steffon Mitchell 6′8″, 220 lb. is the real Minnesota native workhorse here as one or two other guys play token or match-up minutes whereas Steffon nearly goes for starting stat sheet time. As Steffon (great name) was basically a Florida High School human double-double who could and still can, defend. 5.7 ppg, on a team-leading 9.8 rpg with 2.8 apg, 1.6 spg, and a swat is doing a lotta little to medium things big on right. And if Mitch’s offensive game ever evolves, he’s prolly an overseas pro’ just for his defensive acumen. As he’s a stretch version of Ky sans the offensive output as is.

6′5″, 210 lb. third-year Swing Jordan Chatman is more a part-time starter, although he’s also a utility guy and that’s why I listed him here. 12.6 ppg with 84% on FT-attempts is reasonable enough for a guy with no mid-range game whatsoever. Though a little more shooting everywhere else (40% from the floor and 30% beyond the arc) from a guy said to be a *the* teams’ shooter would be much more marksman like— at least to me. 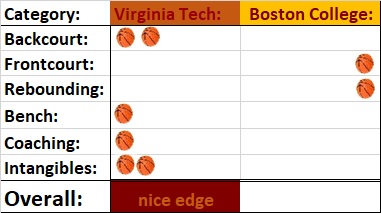 the takeaway:
The takeaway here is… Boston College is precisely two FT-makes per two overtimes and three shots in another game removed from being perfect. 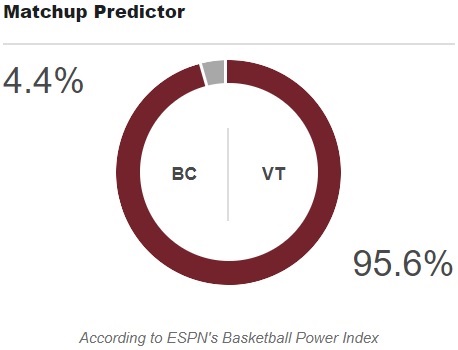 As Boston College may be something of a lowercase or smaller invite post-season team, or they could still yet -in mathematical theory- flunk Atlantic Coast regular season out and end up Spring Broke for any hard finishing troubles.

Because their docket or 2018 schedule thus far, is not all that GungHo looking prima facie. (see: below).

And on top of all of that, they were beaten by regional upstarts/rivals: Hartford and Providence by three total shots all in extra innings or in OT (overtime). So is that what they are… or is that all, they are?

Virginia Tech, on the other hand, is season hyphen one single solitary Penn State point removed from being Top-10 ranked. As right now the Hokies are… no.1o in the ESPN/Coaches poll, no.10 per the Associated Press, no.11 in the ESPN Power Poll, no.11 in Covers.com Power Poll and no.13 in NET Rankings.

So either the herd mentality is bang on the chin or a bunch peeps are drunk on the olfactory manufacturing of their very own… fumes.

Our handy-dandy friend the so-called Forum Guide is still a week or a fortnight away from A.c.c. round-robin activation. However, the year to date trends do tell us that VeeTee is 7% ahead from the floor, 14% better from 3-ball land, and shockingly virtually even on Rebounding Margin.

The most recent five-game trends tell us that the Hokies are now up to 10% better on overall shooting margin (thanks to an O&M defensive uptick); 12% better from long-distance and insanely enough, +2 in Rebounding Margin in the last couple of weeks.

Boston College is +1 on rest here, although that’s awash via having to travel for this Coastal vs. Atlantic roundball date.

And “yes”, there are those that would have me say that the best baller on the court this Saturday afternoon balls for Boston College.

That, or at least the best all-around {sic: Ky Bowman}, flies for the Eagles. They could even be correct, although even this jumped up all-round J.Rob’ does not a fully filled in or fully filled out team make.

Although I do have a lotta respect for Ky’s game and Boston College does have two post-match-up advantage guys. Neither guy is that towering or that athletically advantageous like we will (eventually) Duke and U.n.c. face. The Eagle medium-bigs do give me pause, although they do not give BeeCee… cause.

Because Boston College is gonna need some Hokie-help or an off-shooting afternoon to have a legit chance to steal one here.

“Yes”, outta 16 Atlantic Coast times, Coach J.Lennon and, “momma told me— there would be days like this.”

She just did not have much to say about tomorrow or Saturday afternoon
over in the slightly temperate New River Valley.