Today’s word of the day is… a·vail·a·ble

late Middle English (in the senses ‘effectual, serviceable’ and ‘legally valid’): from avail + -able. The sense ‘at someone’s disposal’ dates from the early 19th century.

Baller Hafley was a four-year letterman (1997–2000) as a Wr on the Siena Saints football team and graduated in 2001 from Siena College with a bachelor’s degree in history. He earned a master’s degree from the University at Albany, SUNY in 2003.

Before entering the N.f.l. ranks, Hafley spent 11 years on the collegiate sidelines with coaching stints at Worcester Polytechnic (2001), Albany (2002–05), Pittsburgh (2006–10), and Rutgers (2011). While at Rutgers, the Scarlet Knights were the ninth-ranked passing defense in the country and Duron Harmon earned first-team All-Big East honors and Logan Ryan received second-team accolades. Both Harmon and Ryan were drafted by and played for the New England Patriots. Additionally, you can see where recruiter Hafley has some inherent in situ P.R. type juice already Nor.-by-Nor-East hooked-up and good-to-go.

In 2012, Hafley made his N.f.l. coaching debut with the Tampa Bay Buccaneers. He joined the Bucs as assistant defensive backs coach and spent 2013 as the secondary coach/Fs/Ss. In 2013, Hafley oversaw a unit that helped Tampa Bay finish tied for third in the N.f.l. with 21 interceptions. On January 27, 2014, Hafley was hired by the Cleveland Browns to coach the secondary. Hafley would remain in this role for 2 seasons (2014–15), before being relieved of his duties due to a coaching overhaul. On January 24, 2016, Hafley was hired by San Francisco 49ers’ new head coach Chip Kelly to coach the defensive backs. In 2019, he was hired to be the co-defensive coordinator at Ohio State. Hafley quickly established himself as one of the best recruiters in the country, truly. He has a rep’ of: “a monster” defensive coach in the coaching sewing circles. And, he can also ink studs to LOI (letters of intent); what wit being ranked ninth overall recruiter for the 2020 national recruiting class by 247Sports.com. On December 13, 2019, he was hired to be the head coach at Boston College after the firing of Steve Addazio. 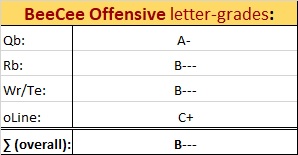 Boston College finished a sporty enough 19th in Net Punting last year and so was grad’ and r-Sr. 6′. 190 lb. fifth-year Punter Grant Carlson. This off-season Carlson (somehow) shrunk an inch (now 5′11″).  Far-righthand mushrooms are strange jus’ like dat— just ask Coach Alice. Before that, Carlson was an AAAAA all-state punter down in the sunshine state who did not miss an FGA under 65 yards in any post-season kicking competition. So “yes”, leg-talent and leg-strength both work here. Grant has now amassed a 65-yard long boot in collegiate punting terms thus far… and yet history says he has even more leg in the bag than that. As he has yet to miss a P.A.T. in any competition. So, you kinda have to wonder if he is best served as footing BeeCee a leg-up as a punter —and not as a place-Kicker? Grant has had one career punt snuffed out and he botched one trickeration punt-fake run as well. Overall, this is a good and heavily experienced Punter, who is just short of playing footsie great.

Danny Longman (neat kicking name) is a 6′1″. 19o lb. true Jr. year, Kicker. And Dan-the-man -same as Carlson down below- swings a big foot. 92% career touchbacks at any level on KO’s says so. So, does only missing on FGA and one P.A.T. in scholastic terms. Including the Florida Championship winning clutch FG-make back in 2017. Danny also holds numerous school and regional T&F records in the 400m and the grueling 800m events. So, he surely has enough legs plural to get to the corner on any fake-FGA. Ditto being a big-time foūtball (soccer) recruit in addition to all of that gridiron kicking acumen. That being said… Temple U’s grad’- transfer Aaron Boumerhi and his 73% career leg might want a word with all of ^that^. Either way, expect BeeCee’s FG-Kicking to improve a bit this season. (UPDATE: Danny has not kicked (in-game) in two weeks, so it looks like they shifted to the Kicker below).

Also, Kickin’ is… Aaron Boumerhi. Aaron is a 5′12″, 196 lb. grad’ transfer 5th year Kicker who has a really deep/flexy leg-load on his wind-up. (i.e. he might just be a smidgeon slower than on ave’ for his follow-through). Aaron is also a National Honors Society for students earning a 3.5 GPA or higher. Temple.edu and Bee.Cee.edu proper’s on that alike. As a Kicker, Boumerhi had a good though not quite a spectacular resume coming outta a soccer starring high-school career. Lottsa local regional honors and statehood not as much. Aaron also had a history of kicking dings and dents so we may not have an honest read on his ceiling health-wise. From what I can glean between two different schools, Aaron is prolly the more accurate kicker overall with a narrower range. And Danny is the home-run hitting Kicker if/when you wanna try his bigger tho’ less accurate, deep-FGA leg.

(whispers say BeeCee’s LS (long-snapper) may be out… St.Nikephoros bless!) And the BeeCee KO coverage team does some in-line shifting to mess with your blocking count pre-KO itself.

Special Teams letter-grade: hmmmm, C+++/B— fence. As in …if the BeeCee ST’s only had more return game “oomph” I’d give them a higher grade here.

Number of Eagles who could soar @Tech=11

Although it seems to the point of ‘feels’ like Boston College football has been more -or better- of late— in point of fact they were a mere 44 and 44 under coach Stevie. 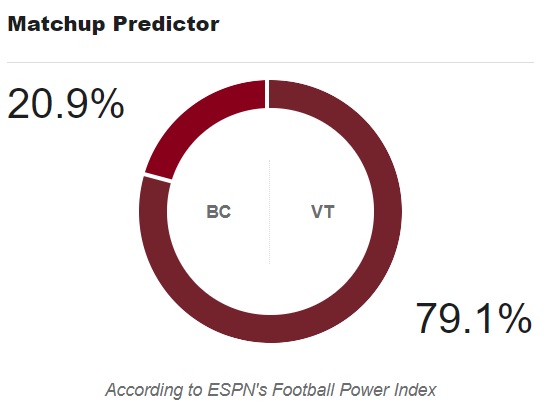 .5oo football right on the nose. As it doesn’t get any mo’ mathematically even than that.

That however is why the likable and 6-time post-season bowling in seven years Coach Addazio was not retained.

He could not fish or get off the pot and the fenced Boston chowder’s need less butter and mo’ parquet if you will than that.

So, this ain’t your same-ole, same-ole Boston College gridiron ferrous type of squad. This one tosses the football and if they ever get the should be better than it is ground-gainers cracked up?

formulae football here favors Virginia Tech. As BeeCee has seen its 2020 seasonal ceiling sag a bit due to two consecutive seasons of early-entry N.f.l. escapees and coaching-change Δ departures. As the Hokies seem to field more overall talent Top-22 stem to stern than BeeCee does; ‘seem‘.

Ditto the factoid that there are actually 44 F.B.S. players that have rushed for more yardage than the Boston College team has this year. (i.e. one could read this as an uno-dimensional team, at least thus far).

#ChallangeA.c.c.epted… there are 1,440 minutes in a day and Eye hope VeeTee need not win more than high 40’s worth of scrapping here.

This one looks okay enough on paper and upon statistical review. Tho’ I’ll make you a late November prediction right now… one of these 5-2 combined football teams is more parts 2-5 or cracked glass to close.

Eye say this as there is some backchannel scuttlebutt that BeeCee has noticeable physicality doxing advantages over the more finesse or diva looking Hokie club this year. (it’d be really nice to see the Vice Squad take offense to that and clamp down good-n-hard on the Eagle TOP (time of possession) wings come Saturday night).

As in… Boston College has lost its last eight games as a program –and 11 games against FBS teams– when allowing 170 rushing yards or more. Virginia Tech has hit the 170-yard mark –as a program– in each of its last five games and in nine of its last 11.

Boston College is basically just finishing up Springball and August Camp at this time. As they have a new Vito Corleone head honcho and new underbosses at O and D-coordinator alike. So, this team’s best 2020 ball is likely out in front of it. Tho’ they are pretty experience and learning-curve shy at the moment for it. (Whereas VeeTee only ranks mere 6th best/highest in returning experience). That just has to help the home team here.

Slight edges to be found here on 1st-down per each offense. And the BeeCee O is better on Lo.FM’s than the VeeTee O; with the VeeTee D a bit better than the BeeCee D on Lo.FM’s. Pretty much a canceling effect, tho’ one of these two needs to go’on and make a 3rd-down (O or D), play!
EDGE=PUSH.

BeeCee is not bad at all on Havoc generating D. It is rather that VeeTee is better than BeeCee at generating halt-unit Havoc and that the BeeCee O is close to defenseless at preventing the same.
EDGE=VeeTee (significantly, too).

PLANDEMIC:
Hit Khalil Herbert, Blackshear, HenBoss (or even a little BAX/QVT) and Tre ‘the burner’ Turner upside BeeCee early and often. Control the clock, let the air out the football and keep the needs a 2020 mulligan j.Hamm’s Lyte D a minute or three to develop nice benching.

So, Boston College ain’t ½-bad. They ain’t chopped-liver or a team you wanna mess around with and allow to hang in the game. In particular, if you are forehead rubbing an @U.n.c. hangover that just won’t (quite) let go.

They are, however, kinda: inert looking.

NOT bad. In point of fact, they are a bit north of average. This is coaching (the verb) rather well up on Chestnut Hill. Considering the inherently spotty nature of their depth-chart as talent personnel limitations go here-n-there.

And yet there is no real: “bang” to their game.
Not enough ‘pop’ in their cans.
Decarbonated, in word.

Nevertheless, there is a chance that the third-half of Nc.State, (after their passing Qb1 swap), breaks off here. As you have to favor their Qb1 vs. our Secondary 2’s or 3’s on Saturday night over in the 24060 New River Valley.

As the stampeding Fu’fense can indeed score with ’em.
The only tally discernment is will O&M eggs and j.Ham, be ‘available’ to: stop; ’em?