The Hokies also open NC2A, D-1, and inter-conference play with Atlantic side Clemson. Both teams are in flux and frankly, this one may only be code for: …which one is actually less fluxed up. Clemson has had a turbulent off-season and departed three real-live talents and some bench love in addition to that. V.P.I. is no longer buzzing as a veteran Coaches Young(er) regime now holds O&M (hard) court. Tho’ you still wanna know who is gonna win in the one, hole. Read on, to find… out!

Trey Jemison is a legit Five or true-C, at: 7′, and 256 lbs. of sophomore-season paint-sized bulk. Though Trey currently fields a rep’ as a rim-protector and glass-swiper and not a whole lot else. As 33% shooting on a square-foot basis modestly good for .4 ppg thus far that needs some tradecraft love. That plus a year dropped to a knee-surgery (St.Nikon bless some more) and you have a kid who is off-schedule in terms of his hoopology development. Tho’ you also have a kid who was: a four-star prospect coming up scholastically, as TeeJay was ranked No. 1 in the state of Alabama and No. 12 in the country at Center, according to ESPN.com. As the body looks most wiling, strong, fit/trim looking real-deal Five with an 82″ wingspan. Plus Mr. Jemison knocked down a shiny 3.75 GPA as a member of the National Honor Society. CU.edu props on dat! Tho’ the athlete in “student-athlete” really does need to take the proverbial: “next step(s)” here.

Paul Grinde is a whopping 6′10″, 300 lb. (listed weight) roster member who is not listed on every single roster I visited. This makes one wonder if he is really (still) listed @Clemson, Sc. or not?

Paul is a Va.Beach escapee who -in addition to being one of the few human-beings even pastier than me; as the only place Paul, Yeti’s and I can hide is in the… snow- Paul is an extremely rarified D-III (Vassar) transfer big-man who put up 14.1 ppg, 6.7 rpg, on 56% overall and a nifty to the point of surprising 49% 3-ball vs. lowercase competitive teams. How well this all translates for the pretty dang round looking though obviously skillful Grinde in All Competitive Conference terms remains to be seen/proven.

Though either way, he and Tery conspire to give Clemson a considerable big-man edge downstairs in the paint. 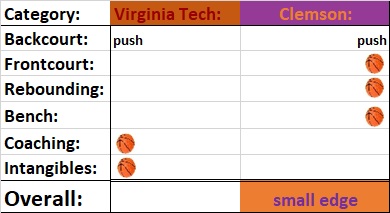 the takeaway:
The takeaway here is… gonna be a minute or three before this Hokie O takes off.

Our handy-dandy friend the so-called Forum Guide of Graham Houston fame is on the premature for this one— although it surely will field some mad March 4th, 2020 A.D., game. 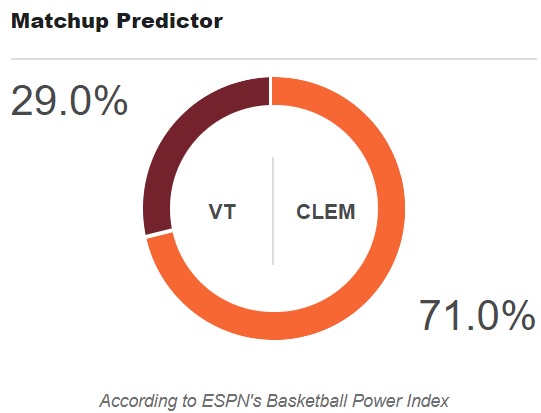 The annualized year-to-date vitals say… check back in a fortnight after a few accrue.

The most recent 5-game metrics say that… see above…

The pet terms I am getting that best describe Clemson hoops heading into this 2019-2020 season and Atlantic Coast Conference opener are: “uncertainty”, “volatile” and “unknown”.

And frankly speaking, you could probably/nearly opine the same things for Mike Young’s debut or kickoff hardwood contest down in the Tigers’ den. And yet you Hurrying Hokie fans really do need to throw the Jamerson word of: “patience” in here as well.

As the healthy version of this Clemson club mighta actually snuck up on going .5oo in the All Coaching Conference with some health and truly taking care of homecourt business. As Clemson -and prolly Miami as well- has been the pointy-elbowed team that nobody wants to have to: “check” in pick-up hoops terms for years. Not a great basketball squad tho’ a mini-me post-season quality basketball program that is just downright no fun to play and often rather hard to beat.

And yet, the healthy version of Clemson is hurtfully long-gone… as is the 3-consecutive year N.c.2.a. buzzword run of hoops in the 24060.

My call is a mindlessly simple one… and until prove otherwise by some heretofore unseen offensive acumen? Eye am merely gonna call for two words week-in and week-out: “Low” as in “Scoring”. Bet the under on points and the over on turnovers here folks… as scoring could very well be at a premium early this campaign for recently big-bad now 5-point betting underdog VeeTee.

As methinks -which is actually to say me fears- that it is gonna take a season or three to retool this inherited Buzzketball roster into the (heady/thoughtful) Players Only club that is a thinking man’s Mike Young stylized offensive set(s).

To put that another and more direct way… beyond Landy Nolley attempting to operate as a Tennessee Avenue man’s Pt.Forward… who would Mike Young have really been systemic hawt-to-trot to import or transfer into his pet off-side movement and self-decision-making offensive sets 239-miles down in Wofford?

Meaning: this one could very well be a A.c.c. Tourney day-one avoidance 40-minute derby.

As mefears there are gonna be some real live growing, adjusting and retooling pains here gents. Clemson prolly feels somewhat the same and this all conspires to tell me that this one is a race to double-nickels or a Smoky and the Bandit type contest.