Virginia Tech men’s basketball just got Top-25 bounced by Penn.State and now All Coaching Conference play begins. (tho’ back to O.O.C. out of conference for a spell after we do this Telly needy thingy). In lieu of being Nittany Lion O&M blue, which game are we R.A.T.T. closer to? Beating the #3 or getting beat by P.S.U.?

The Hokies now host the shiny looking and pretty battle-tested 5 up and 0 down Clemson Tigers who as we say in boxing are: “…on the come“. This team is moving on up. The George Jefferson of the men’s Atlantic Coast Conference roundball play if you will. And they sure have a top-heavy lot lot lot 2019-2020 back for this campaign. Nonetheless, what you wanna know is who is gonna win and by how much, rights? So, read on to find… out!

CU at a glance: 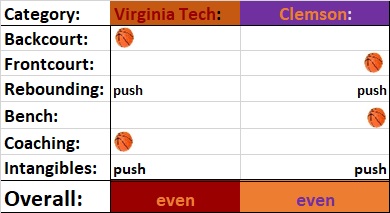 6′5″, 2o7 lb., junior, John Newman III is a Wing with a rep’ for soaring type of dunking. And for having found some needy and nice-fit raw muscle this off-season to boot. J.New’ is said to be a throwback mid-range guy who can get stops as a defensive ace goes to boot. Now mix in 5.4 ppg on 28% long and enjoy the open-court show when #15 breaks windmill dunk from the hipster, free (i.e. he young Kobe dunks from the hip)! And oh “yes”, holding the no.42 ESPN peg and a threepeat in state titles did, not, suck. As Newman III had so many individual accolades/awards that I got tired of adding them up. (20-something additively when I stopped, counting; literally). BONUS points for a really big-ass A.b.a. Virginia Squires era looking ‘fro are hereby awarded here. Dunks really sickly in and/or right on forcefully through traffic/contact. Kinda has a little John Starks go-get-it swaagg to him when he gets it going. Went for 10&½ points with 4 boards last year, tho’ the whispers say he really ‘tweaked’ his knee right at the end of the season and barely avoided surgery for it. (St.Nikon help!)

Clyde Trapp 6′4″, 2o3 lb. Sr. and rather animated sideline showman extraordinaire. As “all the world’s a stage” and Trapp plays many roles here. As an athletic combo-G who nets you 4 ppg with 5 caroms and a couple of dimes (2.2 apg) dropped. This with 29% when dialing long-distance and adding more and more distance to the same (length on his J). Trapp does enjoy an AAAA So.Carolina state championship bling though he had more of a distributing scholastic rep’ and a tag for stepping it up in his bigger H.S. games. (UPDATE: had a blown off-season A.c.l. last year; may St.Nikhon bless!) Versatile 3-position playar… Pt.Guard, Off-G, and Wing trinary alike.

6′11″, 235 lb. true-C, and rookie season Lynn Kidd is not kidding around. At least not play right away turnkey cookie-cutter paint-sized metrics wise. Athletic, rim-protector who can ‘board and finish near the rack. ESPN’s #77 baller last year. We/VeeTee were on this kid pretty hard; may need a year or three as he is offensively a bit undercooked. Kinda like a poor man’s John Sally or something akin to that. Tho’ he is second in swats (.7 bpg) while being 14th in mpg! So, you know the springy defensive rep’ is straight.

…the Fuente’s ain’t taking anything, anywhere!
As sourcing is hinting that Bab’s Whitlock has (suddenly) gone power-wet of late… and that… 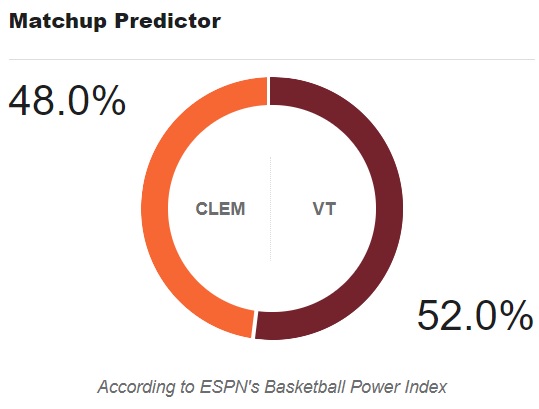 …oh, wait… which article am I in inside of WordPress?

As there Eye go yet again… putting the cart out in front of the, horse.

…we don’t ‘Nova show-up here and Clemson might just show-out and we could get Penn.State, took.

No shite. As this is a pretty deep and a very defensively good Clemson hardwood squad that would truly be sprung if they only had even a medium-sized big-O. A pretty balanced team, that does not really do much of -if anything- all that ‘rong. The kinda team you have to line-up and just plum beat.

Our handy-dandy friend the so-called Forum Guide of Graham Houston fame is calling for a callback in just another couple of games after we enter A.c.c. round-robin play full-tilt.

The annualized year-to-date vitals say that… The Tigers are up an interesting +7% in shooting percentage margin overall (nearly all of which was purr their D), with the Tigers up an even better +11% in 3-point percentage margin (again; nearly all of this was on their prowling halt-unit), and yet the Hokies are up a nice +5 carroms in rebounding margin year-to-date (more so on the offensive fiberglass curiously enough).

Clemson is up +2% at the charity stripe for the year.
VeeTee is up nearly +1 week in R&R in the last fortnight of runs.
VeeTee is a .667 host; whereas Clemson has yet to play this year as a guest.

Vegas says that we are a whole, entire, whooping single-point home u.dog here.
Virginia Tech+1 in defense of our very own Cassell.

And frankly, I’ma not super inclined to disagree.

As there was a post-P.S.U. vibe that P.S.U. gave us a Big-10 P.hD. in physicality.
i.e., the Nitty Lions pushed us around a bit and off our pet spots on O.
And these Tigers ain’t exactly pussy-cats or easy to tame.

That (modest) throwing of ‘shade’ aside… Coach Young does not play a fast tempo’ and neither does Clemson.

However, the fact that the All Coaching Conference vibes also connote, posit and aver… that this may be Bradball’s seminal team in 1.1 decades of Clemson play does not.

And in as much as Clemson has only allowed more than 56-points once this year (due to a hot shooting Purdue 2nd-half); I’d have to say this is a Smokey and the Bandit kinda contest.