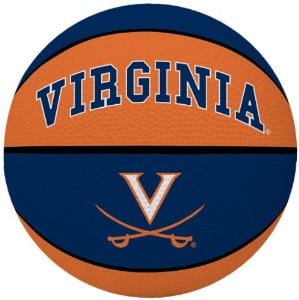 Virginia Tech men’s basketball travels 150 miles -or 241 km’s for you frenchies- for round no.2 of this year Revenue Sports Commonwealth Clash. And after their downright fumbling, bumbling, stumbling, non-VicTory in football? You know Hoo, just cannot possibly wait for round no.2 to go… “ding!”

The Gobblers and the ‘Cavs are set for a rarefied Commonwealth Cup Top-10 hoopology intra-state D-1 rivalry hardwood smash. As the actual SportsWar boss-man, his very own self, Will -freakin’- Stew’ just told yah! So tune in this Tuesday night for an 8 pm kickoff on Raycom and ESPN3/ACC streaming to see what could be a pretty testy contest as these two do not exactly like each other and the stakes could hardly be any higher, here. Nevertheless, you wanna know who is gonna win, right? Read on, to find… out!

Crooner: Anthony Dominick Benedetto: age=92, with 19 Grammy Awards (including a Lifetime Achievement Award, presented in 2001) and two Emmy Awards, and was named an NEA Jazz Master and a Kennedy Center Honoree. Bennett has sold over 50 million records worldwide.
$200,000,000.oo (est. net worth) 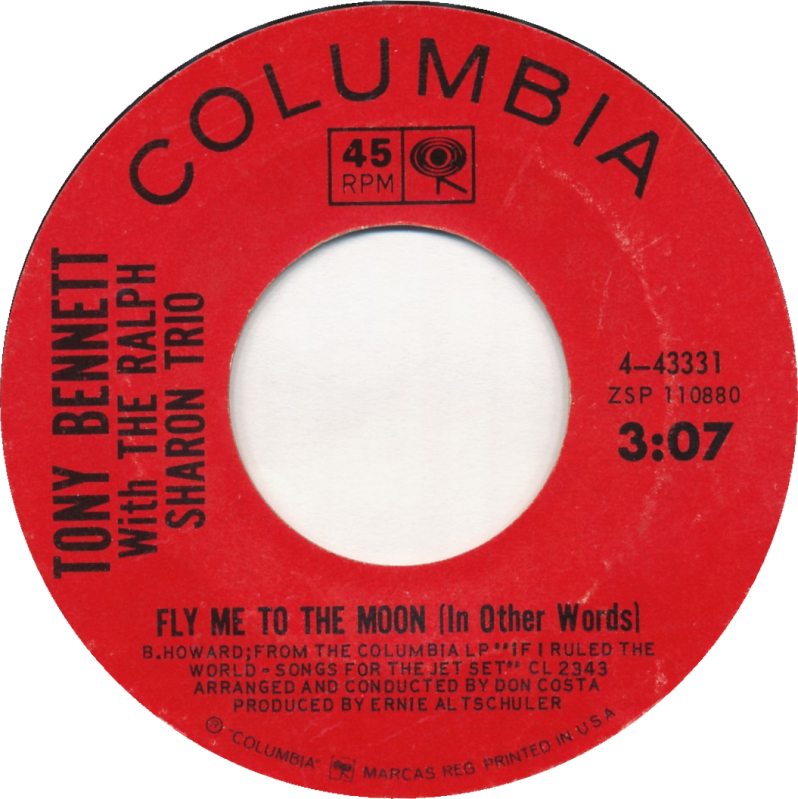 The other Tony Bennett is also a pretty fair to middling basketball coach up at uva. In point of fact, he is basically the Bud Foster of D-1 men’s hoops in defensive terms. His motion-offense is about an efficacious as can be, albeit overshadowed a bit by his much-vaunted pack-line defense. Coach Bennett is the only A.c.c. coach to win 16 conference games in consecutive seasons, and one of three in A.c.c. history to enjoy back-to-back 30-win seasons overall. Coach Bennett is known as a rapport annexing basketball player developer or the coaching (verb) in the truest sense. He has only won nine Coach of the Year Awards at Washington State and UVA combined, and yet curiously enough Coach Bennett only wears three conference crowns to show for it. He does own the single-season win records at both Virginia (31) and Washington State (26, twice). And he does sport a: FIBA Under-19 World Championship gold-medal to boot. As a Christian, coach Bennett is known for the use of his father’s “Five Pillars”: humility, passion, unity, servanthood, and thankfulness.
Amen!

Baller Bennett, one (retired #25), was a 6′, 175 lb. lowercase shooting-man’s Jeff Hornacek/Jonny Stockton hybrid type of player of a Green Bay Wisconsin Pt.Guard who balled for coach Dick Bennett (his pop’s); and oh yes… Tony Bennet the now elite coach, and formerly ex-baller, is merely the #1, as in first-best all-time in college basketball history for career three-point field goal accuracy, at 49.7%, peaking at 53.3% in 1990–91; wow! i.e. baller Bennett is the best shooter in college basketball history; all-time; ever! He was awarded the Frances Pomeroy Naismith Award in 1992 as the nation’s top player under 6′ in height and was an Academic all-American in ’92 on top of all of that. When Bennett left college he was the Mid-Continent Conference’s all-time leader in both points and assists before being drafted 35th overall in the 1992 NBA draft. Then playing three years for the Charlotte Hornets and several more in Australia and New Zealand, where he started coaching after foot and knee injuries forced the now highly esteemed coach Bennett to suit-n-tie, up.

Daddy Bennett and his wife, Laurel, have two children – a daughter, Anna, and a son, Eli.

Virginia at a glance:

Pack–Line 1o1:
The “pack line”, is a defensive strategy that was actually convinced by his father (Dick). The pack line is designed to clog up potential driving lanes to the paint by forcing ball handlers to the middle of the floor where more “help” is concentrated. It forces opposing teams to pass and shoot well while limiting dribble penetration to the rack and post play. i.e. this is not a good match-up in Caucasian-board erasable marker theory for the Wing slashing coach Buzz offensive set.

5′8″, 155 lb. mighty-mite caddying and last years alpha-recruit, Pt.Guard, Kihei Clark is a fun little bugger to watch and an instant fan-favorite for it. Ditto, any kid who refuses to sit and balls-out in a left-wrist cast/brace for it. That makes him a tough little bugger as well. Per his bio’, this hawt Cali’ recruit: “spent several hours at the Children’s Hunger Fund in Sylmar, Calif.” whatever that means though “yes” that is more hours than I spent there, admittingly. That jab being rightfully placed… Lindy’s says Clark has: “extreme quickness” and is a dangerous open-court player for it. Although he must improve his shooting depth (4.4. ppg on 28% deep) and avoid 1-on-1 facebook type tête-à-tête battles for it.

Braxton Key who is at least an S/F anywhere else is a towering 6′8″, 225 lbs. shooting-G at UVA. And he is your surprise team leader in Windex work swiping the glass for a 5.9 rpg with 7.4 ppg per 33% from long-distance all in substitute relief. The Oak Hill Academy basketball factory heritage kid was rolling the tide at ‘Bama before transferring to UVA. Still yet, make no mistake, this kid is a real overload for any S/G or Two he faces. And he’s not an easy match-up even for a legit Three or S/F. 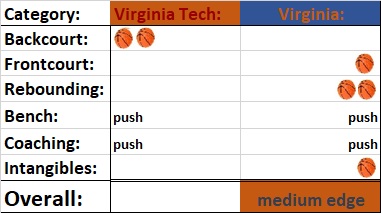 Even if it requires these two meeting in March Madness in about a mere two months time, only one team can theoretically finish perfect in college basketball when only two perfects, exist. 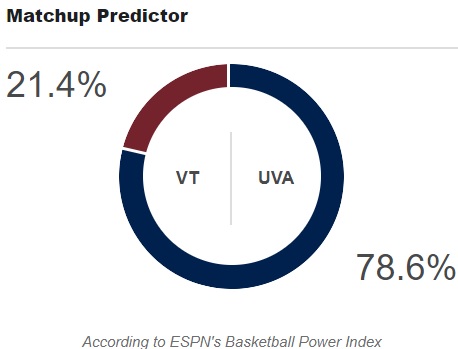 As these two are 29-1 combined at the moment— hooever, UVA has three wins vs. ranked teams by an alluring 26 total points. Whereas V.P.I. has only beaten Purdue and a couple of other power-conference “name” teams (Notre Dame & Washington). So UVA has the check-mark for being a bit more battle-tested at least for the moment.

Our handy-dandy friend the so-called Forum Guide makes an early season appearance per both teams having run already vs. Boston College.

The Forum Guide predicts a mind-blowing 16 Hokie hulubulu @Virginia that as a single-shot predictor that strikes me as somewhere between being titular and/or basically dismissible indeed.

The seasonal metrics tell us that FG percentage margin is basically awash or just tenths of a point removed from tied for the year. Whereas 3-point shooting margin actually favors UVA by +5% and change (thanks mostly to defensive acumen); with rebounding margin a manageable +3 (rpg) in UVA’s favor.

The more recent 5-game trends say that UVA is now a noticeable +6% better from the floor on FG percentage margin, a backbreaking +17% superior on 3-point margin and up +8 rebounds per game on Rebounding Margin of late.

Or in other words gents… UVA is still improving whereas Buzz and Co. have slightly regressed in the last fortnight of roundball play.

Accordingly, of right now, I am inclined to call this a home-at-home series. As only three other Atlantic Coast schools have Crowned Tony Bennett more times than Virginia Tech (6 wins vs. TeeBee). Yes, Netflix and I know… Stranger Things have indeed happened. Nonetheless, methinks uva will want to pick a revenue sports bone with us as an inhospitable New Year host.

As Buzzketball has struggled with stall-ball and/or physical teams thus far this year.

And if we are not beating a mutually defensively rugged although overall less talented Gah.Tech in the ATL by more than a basket, I serially doubt we are beating the University of Virginia by much of anything over in C’ville, Va.

(they, CNN, and Seth MacFarlane like that kinda thing you know)