Virginia Tech men’s basketball returns to the Cassell Coliseum hardwood to get that work vs. what appears to be a beatable out-of-conference (O.O.C.), victim. This after a righting homecourt A.c.c. opening win vs. Nationally Ranked Clemson last time out.

The Hokies now face 1 up and 5 down Coppin State who has also gone 3-1 as cancellations and postponements go in order left-to-right. And 4-o on Yikes and Coach God, bless! The Eagles may actually be a little bit better than last time we saw ’em. And yet it would be lying like a rug to type that Virginia Tech is not the big-time favorite here. Nonetheless, what you wanna know is… who is gonna win and by how much; right? So, read on to find… out!

Juan Dixon is an American former professional basketball player and the current head coach for Coppin State University in Baltimore.

Baller Dixon led the University of Maryland Terrapins to their first N.C.A.A. championship in 2002 A.D. and earned Most Outstanding Player honors of the Final Four. Then went on to vagabond the Association with eight different Professional teams domestic and international combined over a world-tour high-seas interesting nine-season pro’ career. And he got to run ball with some dood returning to ball named: Mike Jordan for the Bullets way back when.

Dixon.edu went back to school and did earn his Bachelor of Science degree in Family Science in 2013 from the University of Maryland. 3-cheers here!

Coach Dixon broke in with the wimminz side at District of Columbia: going 3–25 (.1o7). He is currently 13-52 beginning his third campaign for Coppin State.

On a harsh personal note: Juan’s momma (Juanita) and father (Phil) were heroin addicts, and died of AIDS-related illnesses before Dixon was 17 years old. He was then raised by his grandparents Roberta and Warnick Graves in Baltimore. May St.Phillip super twice bless!

On a further personal note… dating since 1996, Dixon married his high-school sweetheart, Robyn Bragg Dixon, in July 2005. She works in the public relations field and is a cast member in the Bravo reality television show Real Housewives of Potomac.

The two divorced in March 2012 and yet they still live together in Maryland.
They have two sons, Corey and Carter. 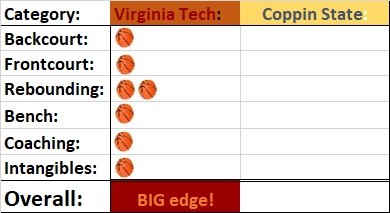 Kenan is by Heeze, Netherlands… and he says his best non-athletic talent is: “reaching the top shelf”. So, there is that and there also is 1.3 bpg. Although the overall floor game and shooting (23.5%) appears to be an Amstel Lyte or a year; or three, away. Tho’ he did average 22 ppg overseas so maybe that shows out eventually down the road? Additionally, you can see the potential for a BIG-line-up from the Eagles if/when they want it here.

The other/younger Tarke went for right at 17 ppg last year in high school ball in/around the District and then up in Jersey. Right now, he has broken in with six mo’ college hoops games than you or I combined at: 5.7 ppg and a helping 4.7 rpg; yet 23% from downtown. So, this one too is a 2023 ask back and wait-n-see. 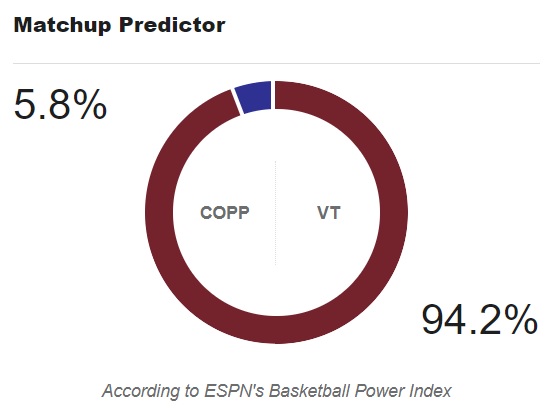 And that’s something, Eye suppose… as they are picked top-4 or Top-5 by all my preview mag’s this time in the M.E.A.C.

…however, I doubt they can beat much of anything O&M, here.

As it will take a lotta Secret Santa Hokie-help for Coppin State to upset A.c.c. VeeTee in this one.

Our handy-dandy friend the so-called Forum Guide of Graham Houston fame is calling for… another week or three of stats, first. Even though, Coppin State did run to within 10-points of fellow A.c.c. Duke (only falling 71-81 @Cameron).

The annualized year-to-date vitals say that… VeeTee is up a whopping +17% in shooting percentage margin (little mo’ on O, tho’ mostly because of Cop.State’s want for O); with Cop.State up a most surprising +4% in 3-point percentage margin (all of it courtesy balding all Eagles with close shaves while contesting the 3), and yet with VeeTee up a nearly astounding +25 caroms with of rebounding margin on the fiberglass year-to-date (more of which was Co.St. sucking on the ‘glass).

Spies say that the ex-Qb1 HenBoss may wanna boss someone, else…

In the mean·time …Coppin State (finally) copped a winning attitude vs. UNCG 86-80 last Thursday. North Carolina Greensboro being none better than an uno win team thus far in the own right— ¿Ya tu sabes?

If you do know what Eye mean, you know that Eye mean that… “aye”, Coppin State has a couple of ballers in their backcourt. Clayton and Tarke are experienced, seasoned and they are not chopped-liver.

They however are not enough.
As the rest of this team looks pretty stiff on film. Inflexible. Unathletic.

(though it was interesting that most of my pre-season mag’s hint or outright say that Coach Dixon had Coppin State moving in the right direction and playing their best ball in a few years to end last season. NOT saying Eye agree; mmm-K? Am saying I am dutifully conveying the same).

As there is no ‘doubt’, that there is quite a gap after the Top-2 or Top-3 Eagles— if you just must count ‘Thomas’ here.

Coppin State may be a little better when they have the rock. As they have recorded a few good offensive outings this season, and yet they’ve been far too inconsistent to trust. As they have also recorded three contests trapped beneath a pretty hard-cap’ of a 54-point ceiling.

So, same as last time… double-nickels is your pet metric here.
If you think the outside shooty/scorey version of Coppin State shows-up then show-out with an over-pick.

Nevertheless, and either way, the only real determination is not whether Virginia Tech wins here —they will, or Eye will eat these very words on the next Podcast.

The only determination is… V.Tech will win by how much?