Virginia Tech men’s basketball remains @Home inside our mid-Winter Cassell in host of what would be one of two very hot-hot-hot Coach Buster Poindexter intra-conference homesteading tix in more normalized times.

The Hokies now catch big-bad all-World recruiting Duke and Coach K. Duke enters this 166-mile nor-by-nor-east foray at 5 up and 2 down on the year, (1st-place at 3-nil in the A.c.c.). And at o-3-2 on postponements-cancelations. So, guess who’s coming to (Owens Dining Hall), dinner? The team that just had an all-things 2020 3-week furlough (Dec. 16th-Jan. 6th) and who is prolly now wanting for some real live on-court hardwood work. Nonetheless, you wanna know who is gonna win and by how much, right? So, read on; to find… out! 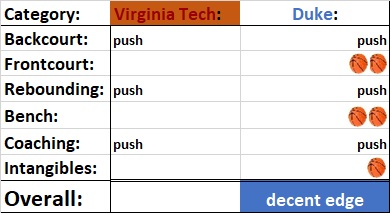 The one remaining legit frontcourt sub’ would be: 6′4″, 214 lb. sophomoric, Wendell Moore Jr. Wendell is an S/F who gets you 6.9 ppg and 3.7 rpg when pitch-hitting; which is not the worst production. Although his 31% overall and 21% from behind the arc strike out way more often than they hit. Tho’ do recall this kid was 2nd-string All-A.c.c. preseason and yah; mo’ was expected here. As this Wing struggled with turnovers last year as a super VHT (very highly touted) recruit two seasons ago. Tho’ the dutiful nod fo’ making the All-A.c.c. Academic team is rightfully bestowed. Ditto for the Two-time USA Basketball gold medalist for the 2017 FIBA Americas U16 Championship and for the 2018 FIBA U17 World Cup. And for being the #1 Carolina H.S. kid who was 18th in the nation (ESPN) and only won back-to-back N.C. AAA state titles along with winning back-to-back North Carolina state finals MVP honors. So, there has to be something real here, and Coach-K and Co. are really waiting for it to, Richmond, Va. homespun Wayans Bro’ lookalike emerge.

Jaemyn Brakefield is a 6′8″, 216 lb., 3o4 quasi-hommie by way of Huntington Prep (W.Va.). A rare mere **** or 4-star Duke recruit who was tabbed 29th in America (ESPN) and pronounces his first-name as: “JAY-min”. Jay-min was only named the West Virginia Gatorade Player of the Year as a sophomore, junior, and again as a senior. Thereby becoming the first player to be recognized three times in the award’s 35-year history! Shazam and Brakefield is said to be a stretch lefty or Koufax P/F at the Four spot. He has good moves to the hoop and is a strong constructive worker in the paint. 5.6 ppg and 3.6 rpg with the team lead at 50% long is encouraging, whereas 50% on FTA’s needs reps/helps plural. That said, most of my preview mags seemed to think Jaemyn was a year away anyway, so this too is s 2022 ask back of sorts.

Debut year, true-C and 7′, 244 lb., Va.Beach escapee Mark Oluwafemi Williams sure looks the physical/enforcing part. As this kid is really tore-up physique wise or physically speaking. 30th ranked baller overall (ESPN) and was more parts scholastic rebounding and defense with the offense hopefully collegiately emerging. 1.9 ppg with 2.6 rpg and a block speak to this. Tho’ MOW did net 24 ppg on the high school all-star touring circuit so there is some measure of developing a more powerful offensive game hope in play here. And who does not need size, rpg, and bpg down-low?

The pine-squad oddity here… is the total/entire lack of home position backcourters for Coach K to substitute in. Zip. Zero. Zilch. Nadda. None. Nil. Go fig’ on that?!? 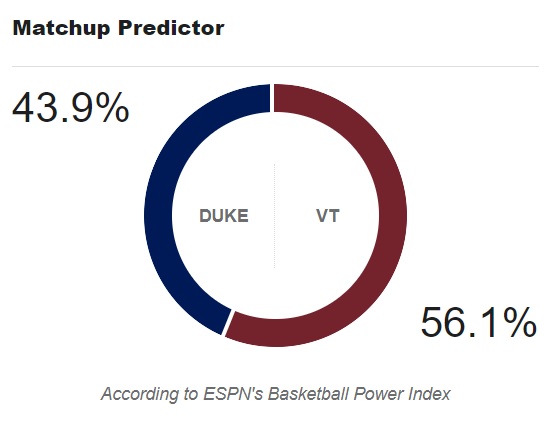 And yet a lotta other men’s D-1 hoops squads won’t be crying Duke a river anytime soon. Let me tell you.

As roster turnover at the rate that Coach K and company are indeed experiencing does not build a lotta chemistry nor does it build a lotta familiarly or even any synergy.

I mean, who would you rather have kick sand up as she and her beaded look runs by?

Our handy-dandy friend the so-called Forum Guide of Graham Houston fame is calling for a 3-point Tech Triumph in this one when in-common opponents are taken head-to-head.

The most recent 5-game metrics say that… The Hokies are up +6% in shooting percentage margin (virtually all on D what with Duke allowing nearly 50% of late); with the F’n Gobblers up an astounding +15% in 3-point percentage margin (same: nearly all on D as Duke is a user-friendly 3-point contesting sieve) and with nobody up much of anything in rebounding margin in the last fortnight of play (as these two virtually canceled each up +6 Windex Wipes per team perfectly out).

Then I found these little two in-game barometric nuggets…

The Hokies are 8-o when holding opponents to 43.6% or worse from the field, and 1-2 when opponents shoot better than that. The Dukies are 5-o when they make eight or more 3-pointers and o-2 when the team hits fewer than eight from long range

Generally speaking… as mentioned above, there is a distinct experience edge or nearly a k.Kong-sized ✔-mark to be O&M favorably found here. Check it out…

Did Eye mention the experience imbalance (factor), yet?

Or, for that matter, did I mention the defensive-imbalance between these two, yet?
(neither of which should ‘go cold’. In very particular not @Home).

Still yet, I did see a few things that seemed to connote, aver, and posit that actually playing-ball (of all the things) is what Coach-K and Co. needed to actually work up their stop-unit approach.

Still yet again, can’t say I feel any less regarding our chances in Cassell compared to @Cameron.

And that makes this one about as close to being a toss-up or jump-ball kinda game as one between mighty Duke and typically lessor V.Tech in roundball terms typically goes.

VeeTee does have a shot, tho’ I’da rather played Duke last week when they were so very inexperienced and defensively stale after a 21-day layoff.

We do have a shot, tho’ that shot has narrowed a bit with Duke
started to widen on finally figuring their 2021 things, out.

As Eye figure Duke prolly would take this best 2 outta 3.
Let’s just hope this is our… 1!