Virginia Tech men’s basketball returns from (successfully) going ’round (the South) Bend to merely host the #1 team in all the land on Tuesday night at 7 pm on ESPN. That’s, all.

The Hokies play the homesteading Game of the Year vs. the very likely team to beat this year as field-of-64/68 bracketology goes. Although there Eye goes again putting the fleeting February cart before the Marching on horse. Because in this one we see a no.1 team and a fellow Top-20 team with ~3 or 4 significant injuries between ’em. That means we won’t be seeing either squad at their best nor at full strength in this Atlantic Coast Competition tussle. That also means that the deeper team really should have the advantage here. Nevertheless, you wanna know what you will see from who’s left and who will win. So read on, to find… out!

Dukie Bench: (depth=8 or 9 when healthy)

Javin DeLaurier is yet another Commonwealth (Shipman, Va) backyard escapee, and this 6′10″, 234 lb. third-year baller has the physical build of a mini-me Dwight Howard. As this Javin is a strapping strong kid upstairs across the shoulders when he posts-up down low. Javin only comes with the tags of being the “most athletic” and “most electric” finisher on the entire Duke roster. As he runs the court thoroughbred well and is a strong internal baller on both ends; all that on 3.6 ppg, with 3.8 boards, a swipe and a block on an absurd 76% in relief, if you need him.

6′6″ and stringbean 184 lb. Alex O’Connell kinda looks like he walked off The Outsiders set as an underfed “greaser” who put on some kayoed “soc’s” Jordache threads and effortlessly acted the part. Seriously, Alex looks the L.L. Bean boy-model part and he’s basically the lowest ranked (no.80) national recruit in the Duke rotation— poor Duke! Alex and his 4.6 pine-squad ppg are said to be dynamite in the open-court and he can dial a floor spreading long-distance at a mere A.c.c. leading 54% on his 3’s last year (39% this season from deep)! (This kid may be a Pro’ just on his depth alone). Plus he Alex courts one of the rare stop-on-a-dime pull-up games this side of the Virginia Squires and a certain Dr. who made a lotta “J”‘s the very same way. With 2 rpg and 1 spg just ’cause. 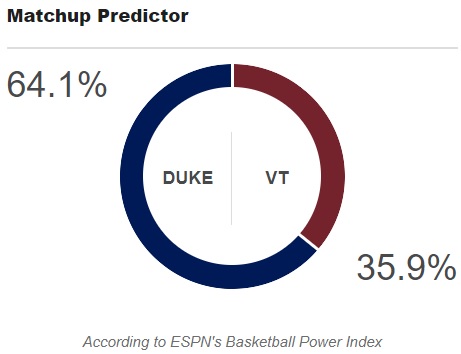 The takeaway here is… Duke really is only two shots from being no.1 with a very high caliber bullet, as only North Carolina has really done anything with their yesteryear 1970’s thump-n-bump Washington Bullets (Wes’, big-E, M.Kupchak Ballard, and Dandridge) looking internal game.

As yah; that’s about what time it is here folks.

And that would surely be the key (pardon the pun) to calling this one easy-peasy -IF- the Dukie frontline were fully healthy and internally: locked, cocked and ready to rock.

Our handy-dandy friend the so-called Forum Guide of Graham Houston fame is calling for a –7.7 point Hokie VomiT this time out. As we were closer to Duke than you’d think in round-robin terms for a minute; or right up until they really opened up on fellow Atlantic Coast Club’s and suddenly we, weren’t.

The annualized year-to-date vitals say that… the Dukies are merely up +1% in shooting percentage margin from the floor, with the Gobblers actually up +5% in 3-point percentage margin and yet the Cameron Crew is +5 boards in rebounding margin vis-à-vis this season.

The most recent 5-game metrics say that… the Dukies are merely up +1% in shooting percentage margin overall (with V.Tech shooting worse and Duke defensing, better of late), the Dukies are now actually up +5% in 3-point percentage margin (due to Duke defending the 3 mucho better and a bit less Hokie netting) and yet the Hurrying Hokies are now +3 caroms in rebounding margin vis-à-vis in the last two weeks of scrumming. Go fig’ on that vs. this punishing Duke frontline folks?!?

V.Tech is up a surprising+6.4% at the charity stripe for the year compared to, Duke.

Well, as R.A.T.T. said above… when two dinged up teams play, I’ma looking at three things…

That and recalling past seasons under Buzz… Buzzketball has surely taken its foot off the throttle and coasted thinner Tech teams through thicker parts of the O&M schedule in years past.

Ergo, to wit, therefore, that is exactly what I am expecting Tuesday —and same again on Saturday vs. no.16 ranked Florida State down @Tally.

As Buzz is just too long-view savvy for burning what calories his talented, though finesse and leg needy 6-man rotation has left in games that prolly won’t R.A.T.T. turn out alright more often than not.

Methinks Buzz pumps the Hokiemobile breaks here, twice; then gears up for an A.c.c. and subsequent NC2A tourney run vs. beatable Miami on Senior Day at home to close.

And as much as I am want to pick an upset or close(r) game, here… Eye just, can’t.
Duke is better, deeper, and deepest yet.