The Hokies must now face big, bad, bad-azz and seemingly fully reloaded and remotivated for Coach K’s curtain call swansong seasonal run, Duke! Duke only checks in at a mere 10 up and 1 down on the campaign thus far. (o-o in A.c.c. play as we are their debut mind yah).  As of right now, it nearly is (sans: getting upset by 2-shots @’the’ Oh.State) it nearly is Duke’s world. “All the World’s a stage…” and this is coach K’s Shakespearean parting shot. Did Eye mention his farewell tour, yets? ‘K… and nevertheless, what you wanna know is… who is gonna win and by how much, rights? So, read on; to find, out!

Among them {sic: accolades}: Baller K Played at West Point under Bob Knight as a 5′10″ combo Pt.G/Shooting-G. He was captain of the Army basketball team in his senior season, 1968–69, leading his team to the N.I.T. as Vietnam-era West Point finished fourth in the tournament. From 1969 to 1974, Krzyzewski served in the United States Army and directed service teams for three years. In 2005 he was presented West Point’s Distinguished Graduate Award. And thank you for serving –after that Mike has not really done much of anything as a coach…

(Rarefied) Senior-year, 6′6″, 2o6 lb., Joey Baker (S/F), may or may not be the next B.M.O.C. (Big man on campus). Tho’ he may be the next Chrissy Laettner. Tho’ they both sure spend a lotta time cropping their lettuce (hairstyle) and motif/looks overall. With no word yet from Brian Davis. This is your other Team Captain, and 7.7 ppg with 2.2 rpg with a marksman looking 42% long is not the worst leadership-heavy substitute look. No. 33 overall prospect per 24/7 Sports may have not overachieved any. Tho’ that shooting might still merit an exported sniff. And Duke.edu up on the wall is a good look. Did I mention his hairstyling-n-profiling, yets?

A.J. Griffin is a 6′6″, 22o lb., true-Fr. year S/F or Wing from Ossining, N.Y. Who seemed stronger than his listed metrics to me upon film study. Good looking near specimen typea kid. Only ESPN’s no.9 baller overall. And only #1 in N.Y. and likewise the #1 S/F in America itself. That’s no bad thing… neither is having a poppa-bear like: Adrian Griffin. Who only balled a decade in the N.B.A. and is currently an assistant coach with the Toronto Raptors. That can’t hurt 1ι (one-iota). Nor can wearing a: gold medal. Which Griff’ hung with Team USA at the 2o19 FIBA Americas U16 Championship. Girls still dig on, gold; rights? 6.1 ppg with 2.4 rpg on a Duke blue-ribbon 46% when dialing long-distance digs a lotta things down the next level road too.

6′9″, 242 lb., Theo John is a grad-transfer (Marquette or Al McGuire land) P/F. Who does indeed look the older more matriculated more physically mature part. Might not get carded in fact if you need to go buy some Friday Night Drill suds. Second-ranked Golden Eagle shot-blocker ever (198 send-backs). Though big-John plays mo’ for his D’s than fo’ his O’s. As he is even down from his Marquette metrics of midrange single digits on scoring rebounding what with marking 3.8 ppg with 2.9 rpg on 56% at Duke. Still yet… what if he gets 2 diplomas and 1 ring for this? As this is a glue-guy who does all the little things right at the expense of mistakes themselves. Theo is also a physical, intimidating sort… almost has a little ‘Zo Mourning build to his look to boot.

With no regular Guarding in the 6 through 10 warm-up line-up, one could dare to opine that this
is a very, Forward, facing crew indeed.
(Tho’ shooting they gots).

…it is sure hard to know when this 2o21-2o22 Virginia Tech men’s hoops club will take whomever, seriously? 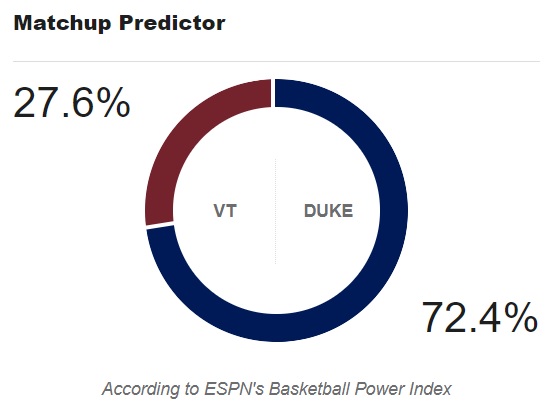 Other than that… they seem a little more serious/willing away from, home.

As they battened down the hatches for Navy.

And then they most recently played their bonniest game of the year so far.

Does the Examination Fall Finals 24o6o really offer that many distractions? Because this is one mercurial allotment of hardwooders; to begin the much was/is indeed expected Regular Season. I mean like several shades of beantown keltic parquet hard to ratify mercurial at that.

Nonetheless, here we Duke go.
And this highly mercurial team had better game-up.

Our handy-dandy friend the so-called Forum Guide of Graham Houston fame is calling for a deeper into All Championship Conferencing ask back; once Robin round balls into head-to-head, shape.

The most recent 5-game metrics say that… Duke is now up +4% in shooting percentage margin (all on O, as they nearly tied on D); Duke is also now up +2% in 3-point percentage margin (1% each on O & D), and yet equilibrium was reached in rebounding margin on carroms in the last fortnight of play. (Tied at +2 backboards apiece).

VeeTee is up a nutty looking +9 in R&R in the last fortnight+. (Due to a tourney very compressed workweek. Tho’ Duke had 2 testing cancellations prior to that as well… FYI).
Duke is a 1.oo host; whereas  VeeTee is .667 as a guest.
Duke is up +3% at the charity stripe for the year.

Duke (1o-1) is the preseason favorite in the A.c.c. and is also the only team in the conference in the current Top 25.

“This is about as good of a Duke team that I’ve seen in quite some time,” Virginia Tech coach Mike Young said.

As fo’ me and my committee of One?

Well, this could very well be one the better Dukie teams in a few seasons, fo’ reasons twofold… 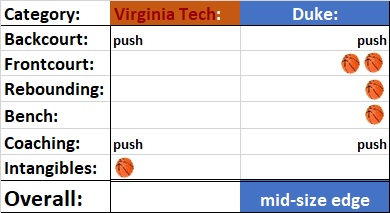 All of that conspires to tell me that we/VeeTee had better land an even St.Bonnie+++ or A’est +++ game punch here.

As there is a sneaking chance our sharp-shooters could snipe this one from the outside. However, they are not epic athletes, n’est-ce pas?

Or, in other words, we have to gear down and win the battle of the throttle here. As run-n-gun fun-ball vs. Duke skywalkers, gliders and gazelles could get us gunned-down indeed out on the visitor wins 3 in 10 times A.c.c. road.

Now, I’ma not One to say that this Duke team has mo’ Talent(s) than several seemingly grandpaw or twilight fading era squads did.

I am One to say that this one seems a bit mo’ mentally durable, and less brain-box double-dribbled.

Which is to say… Duke is the rightful favorite here…

(…unless we have really been in the tank and sandbagged to begin 2o21?)