Personally, compared to where we were September picked? Plus, an opt-out, then a Coning (ankle), plus a bad Radford night, plus some dings/dents, then minus two different messy/mandatory testing protocol sit-downs; and plus/minus everything else?

I could not be happier for Mike Young and Co. As The Hokies and Ren MacCormack (A.K.A.: Kevin Bacon) and Aerial are gonna get that ho-down (pardon the pun), work! Vs. the 14 up and 9 down Florida Gators. Who went .563 inside the S.e.c. or good enough for 5th place in-conference. Florida also (ultimately) went o-o-4 vs. all things 2020-2021 as postponement and cancellations go. Nonetheless, what you wanna know is… who is gonna Round-of-64 win and by how much, rights? So, read on; to find… outs!

Baller White played at Ole Miss from 1995 to 1999. Where he became a starter in the eighth game of his freshman year and remained a starter for the remainder of his four years at Ole Miss. During White’s college career, he finished with the 6th highest assisting total in Ole Miss history. He also led his team to two SEC Western Division Titles, three consecutive NCAA Men’s Basketball Tournaments (1997, 1998, and 1999), and the first NCAA Tournament victory in the history of Ole Miss. He played professional basketball with the I.B.L.’s New Mexico Slam and then “over there” internationally in England.

After earning his bachelor’s degree at Ole Miss, White joined the men’s basketball coaching staff at Jacksonville State in 2000. At Artis Gilmore State, Coach Mike earned a rep’ as a recruiting earner itself.

Afterwards, Coach White spent seven seasons (2oo5–2o11) on the Ole Miss coaching staff and developed a reputation as one of the top assistant coaches in the country.

After that Coach White got his first Big-Whistle gig at non-basketball factory La.Tech. At the 1oo-game mark, he had the highest winning percentage and the most wins of any coach in Louisiana Tech history. Fielding a winning team every single time and making and advancing into the post-season (N.I.T’s all) every post-season less turning-over/rebuilding year no.1.

Subsequent to that… Coach White got the Sunshine State namesake nod @Gainsville. Where he has only made the post-season 100% of the time and the NCAA’s 83.3% of the time. Including one Elite-8 shocking run and two shiny enough Round-of-32 looks.

As you can see… there is a handsome escalation in the level of competition and likewise an ascendency in the level of award(s) here. Hand-n-hand; and that tends to be a validating sign. As careerist high-anxiety or professional apoxia has not bothered Coach Mike on his roundball ladder-climbing come-up-ins. Additionally… coach Mike knows how to post-season put-in-work… as his sporty looking .65o Tourney metrics firmly attest.

White is married to the former Kira Zschau, an All-SEC volleyball player at Ole Miss, who also
has a J.D. degree from the university. The couple has two daughters, Rylee and Maggie,
twin boys, Collin and Keegan, and a son, Dillon.

Florida at a glance:

Virginia Tech at a glance:

6′5″, 189 lb., Jr. year Scottie Lewis G is your main substitute gun here. ‘nother high-flyer per his signature 2-handed jams from the baseline. Scottie is more parts scorer (9 ppg) and less parts pure shooter (44.4% floor, 66.7% FTA’s, 30% trifectas). Tho’ he is said to be one of the elite bull-pen relief defenders in the So.East’. Kinda/sorta a knockoff Baltic Ave.’s man version of the sharp-elbowed Michael Cooper, albeit per a frosted-top Ric Flair looking afro’, hair. (no joke). Lew’ is another ***** (5-star) prospect who is said to be a ‘smooth Wing’. Tho’ he also appears to drift a bit on tape. As more was surely expected from this no.7 in the national per Rivals recruiting coup playar. As he is well-seasoned what with his scholastic Sportsmanship Award and international game (USA Basketball u17). Likewise, Scottie also stared in T&F… where he only recorded a 10.5 in the 100m, a 21.6 in the 200m, and then sniffed up on a 7′ high jump. Lewis is indeed a freaky-freak, tho’ there are those who thought he’d freaked out {sic: mo’} by now.

Osayi Osifo a 6′7″, 225 lb., S/F plays about 12 mpg. He is an imported baller by way of: Bedworth Park, South Africa. Don’t type that one too often, or often enough. Anywho… Osayi is known for his krazy red-line revving motor. As the hardest worker who is only flexing his 4th season of hoopology overall. As he only took up the hardwood back in 2017. So, the 1.9 ppg and 3.7 rpg in such limited looks make you wonder how he will look if/when he really ever learns this game? As the body kinetic and the heart, itself are most willing indeed.

After him… FU has: Jason Jitoboh, C, 6′ 11″, 285 lb., sophomoric, Abuja, Nigeria native; and Samson Ruzhentsev, S/F, 6′ 7″, 192 lb., rookie year by way of Moscow, Russia; and  Anthony Duruji, Wing, 6′7″, 22o lb., third-year Germantown, Md. Or a pretty eclectic imported end of a global bench to throw at you. Expect for their mpg have been (thrown)-down of late.  Jitoboh gives you an appropriate Post match-up size and defense on 56%. Ruzhentsev gives you Point-F facilitation. Duruji gives you 6 ppg of productive bull-pen work. 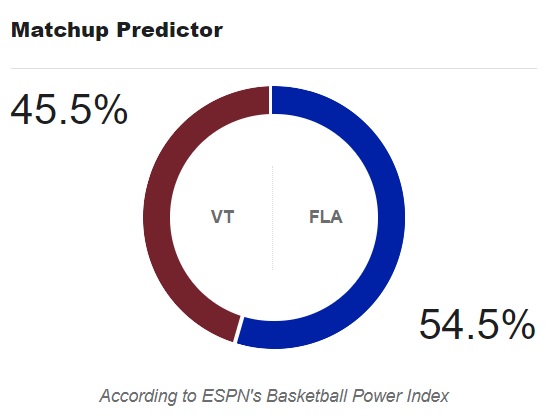 The takeaway here is… that Vegas says that either team could take this one… and as you will see below… those who do not respect R.O.I. Analysis is gonna feel ‘chippy’ indeed. (if you pay-wind0w punny know what Eye means…)

(as the R.O.I. for the Pt.Spread and the money-line (just pick the winner, no points) was bassackwards earlier for the savvy shopper in you).

Eye’ma not serially inclined to Vegas disagree. As you will see two good and two greatly coached teams here that chart pretty much as a split-vote with 3-starting quality guys out combined across these two Round-of-64 middlecase seeded teams.

The caveat/thingy is… that only one of these two teams is missing 2-starting quality guys.

Our handy-dandy friend the so-called Forum Guide of Graham Houston fame is calling for a double ad-hoc fubar cancellation. As Florida played two A.c.c. foes… (@Boston College: W, 9o-7o and then @Florida State: L, 71-83). And yet we/V.Tech ultimately never got to court either A.c.c. foe during this mucky campaign. St.Nikephoros bless… this is a hard row to hoe of late… That said, BeeCee finished dead A.c.c. last and Florida smoked ’em by 20. F.s.u. was your de facto regular season champ’ and that was also the Keyontae Johnson collapse game. So, all R.A.T.T. analysis eggs were scrambled there. Tough to say what that one means after such a terrifying event?

Still yet, in very limited/truncated extrapolation line-of-best-fit or 4-squares regression theory? Florida would slot not above V.Tech in the A.c.c. standings are the best I can come up with here. I’ll leave it to you dear reader to determine how close to 3rd place V.Tech that puts Florida in R.A.T.T. A.c.c. terms.

The annualized year-to-date vitals say that… Florida is up +1% in shooting percentage margin (with Florida a little better on O and V.Tech a little better on D); Florida is up +3% in 3-point percentage margin (all on D with the O’s in a dead heat draw), and yet V.Tech is up +2 boards-n-change in rebounding margin annualized year-to-date caroms (per: V.Tech better on the D-glass and Florida better on the O-glass).

The most recent 5-game metrics say that… the Gobblers are up a whopping .1% or 1/10th in shooting percentage margin (a sister-kisser here, both shooting/defending pretty well of late); however, Florida is now up nearly +5% in 3-point percentage margin (the Hokies shoot a little better and the Gators defense the “3” mucho better), and yet nobody is up much of anything in rebounding margin in the last fortnight of play (both trading underwater at –1 rebounding margin). (READERS note: only the Florida Gator stats are hardbound here… what with so many gaming date cancellations for the O&M crew). Although Florida has science-fact objectively improved on D recently, that much is crystal clear.

Florida is up a useful looking +5 % at the charity stripe for the year.
VeeTee is .667 as a neutral; whereas Florida is .75o as a Swiss.
VeeTee is up multi games or +a fortnight in R&R.

There are some who say that this team is more parts contender (i.e., better than a prospect. i.e.,2, less than a champion) and that Florida has pretty much reached its hard-cap level.

With the elite services of Mr. Keyontae Johnson now taken away?
I have given that look some thought(s)…

Because whatever this team’s roof really was/really was not… they are surely south of that sans their Key’-note speaker.

The kicker however is… one could very very much say the exact same of beloved Vah.Tech. Are we more parts overachieving prospect or finally met their seasonal level contender?

Are we at our ceiling -or even out on our roof- sans two snappy lead-G’s in this one?

Thus, making this one NOT my pet ‘two ships passing in the night…’ these are two ships shipping water as I type. Making this one all about the pumps. Who can pump-up more and patch-kit a combined 3-7 finish between these two awash decks?

The other queer thing is… when Florida got beat, they were either within 1 or 2-shots (thrice) or beaten by at least 11-points six, that’s (6) other times. This making this Coach R.Lo’. Stevenson coached squad a bit Dr. Jekyll and Mr. Hyde here. As the only thing, consistent about Florida this year was their inconsistency itself.

Except fo’ one thing… only one team (Florida) is just a little better of late on D.

The most squirrely part is that the other team (V.Tech) just so happens to enjoy the higher defensive (+24 spots) and offensive efficiency ratings (+43 spots) for the 2020-2021 duration.

Ergo, therefore, to Whit; unless one of these two really takes to this new gym’s shooting lines and goes Strange Case and runs away and hide(s), late?

…this one a race to the modern-speed-limit of 65. 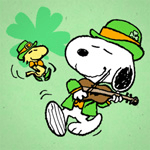